Mulan, Disney’s latest live-action remake of one of its own hit animations, was meant to be one of the two summer blockbusters, along with Christopher Nolan’s Tenet, to breathe fire back into the wounded dragon that is the cinema industry.

So much for that.

Executives decided to swerve a theatrical release and instead make Mulan available on the premium video-on-demand service Disney+, where from today you can watch it for ‘just’ £19.99 as well as the cost of your monthly subscription.

Disney plus, indeed. Still, leaving aside the dubious morality of such a pricing strategy in these embattled times, and leaving even farther aside Disney’s wonky argument that 20 quid (plus) is still a bargain if there’s a whole family watching, how good is the actual movie? 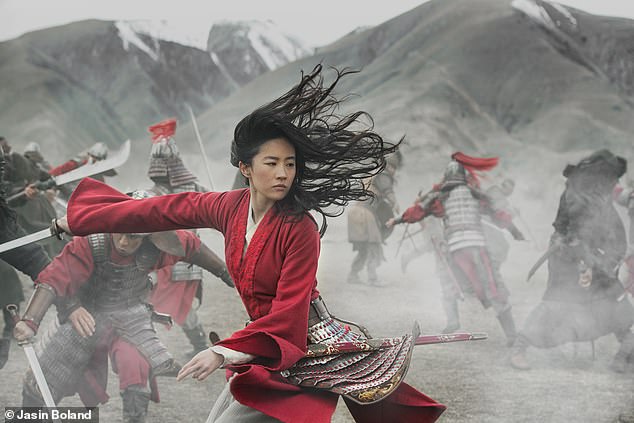 Mulan, Disney’s latest live-action remake of one of its own hit animations, was meant to be one of the two summer blockbusters

It adheres pretty closely to the plot of the 1998 animation, which was itself inspired by a Chinese folk tale, the Ballad of Mulan, about a heroic teenage girl who disguises herself as a man to fight off the rampaging Huns.

That dates back to at least the 6th century, making our own story of Robin Hood look positively hot off the press.

But the 1998 film was fun. There were songs. Miriam Margolyes voiced the village matchmaker.

And Eddie Murphy had a blast as a scrawny, playful, jive-talkin’ dragon called Mushu, who got upset when people mistook him for a lizard.

This version treats the story with great and at times oppressive solemnity.

Of course, in this post-MeToo world, we should probably take more seriously than ever the tale of a girl having to pose as a boy to get on in life.

But that has always been a narrative best suited to comedy. Shakespeare knew that, and so did Juliet Mills in Carry On Jack.

The original Mulan was a laugh a minute. This one isn’t even a laugh an hour.

Chinese-American actress Liu Yifei is a likeable lead, just about pulling off the genderswitch conceit and looking the part as she sets about the enemy in bright red battledress

Still, Niki Caro (who, to make this film about a woman besting the blokes, was aptly handed a reported £150million budget), at least makes Mulan a properly impressive spectacle.

Needless to add, it would be even more impressive on a cinema screen — but the battle scenes, within the constraints of a family film, are genuinely spectacular.

Moreover, Chinese-American actress Liu Yifei is a likeable lead, just about pulling off the genderswitch conceit and looking the part as she sets about the enemy in bright red battledress.

Mulan rouge, if you will.

And, in a further nod to MeToo twitchiness, Mulan’s romantic yearnings are underplayed.

In the animation, she fell for her barrel-chested commander.

This time, instead of going weak-kneed in the presence of her virile boss, the chap she fancies is an equal, a brave fellow warrior from the ranks. 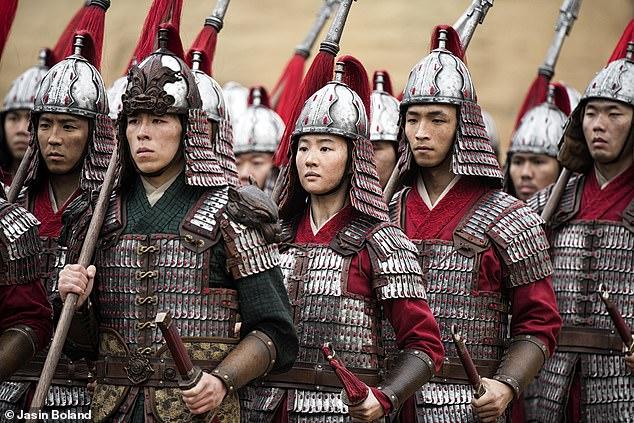 But Mulan’s first duty is to her dear old dad (played by Tzi Ma) back home, whom she has risked dishonouring by saving him from having to fight.

Loyalty to family is the message the film hammers home with the subtlety of a pneumatic drill, not the time-honoured Disney maxim that every good girl (as long as she’s pretty, with a cute snub nose) deserves her prince.

So this is a Disney film of its time and helmets off, in a way, for that.

I won’t be churlish and suggest that chucking hundreds of millions of dollars at this relentless assembly line of live-action remakes is a colossal creative copout.

But next time, maybe I will.

The title of Charlie Kaufman’s new Netflix film, I’m Thinking Of Ending Things, implies there might never be a next time.

Kaufman is the maverick writer and director whose credits include Being John Malkovich (1999) and Eternal Sunshine Of The Spotless Mind (2004).

His last picture was a truly ingenious stop-motion animation, 2015’s Anomalisa, about the mid-life crisis of a man voiced by David Thewlis. 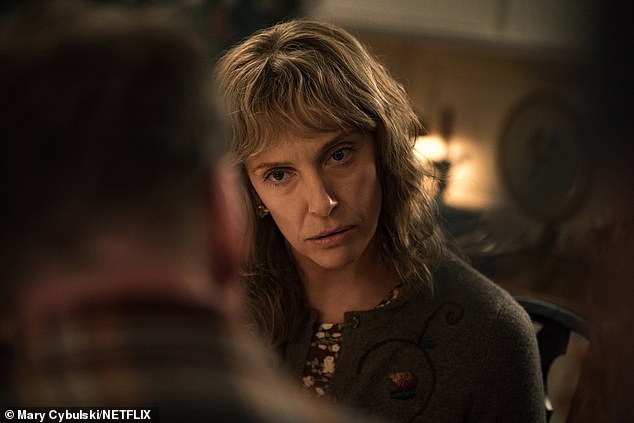 I’m Thinking Of Ending Things, starring Hereditary’s Toni Collette, is the latest film by Charlie Kaufman, who also created Being John Malkovich and Eternal Sunshine of the Spotless Mind

Existential angst is to Kaufman what, say, tennis balls are to Andy Murray. He can ping it at us in any number of ways and in this film, based on Iain Reid’s 2016 novel of the same name, he filters it through a young woman played by the hugely gifted Jessie Buckley.

Never named, she is six weeks into an unexciting relationship with a seemingly decent but dreary guy called Jake (the similarly excellent Jesse Plemons).

Jake’s presence in her life is no reason not to end it, and a visit to meet his deeply strange parents on their isolated farm (Thewlis and Toni Collette, both letting it rip as weirdos) does little to lift her troubled soul.

Then things get even more peculiar, in a film that received exuberant plaudits following its limited cinema release last month but which, despite the quality of the acting, I’m afraid I found almost unendurably grim.

What a long time it took to get here. This is the 13th X-Men outing, originally slated for release two years ago.

But a studio sell-off and the pandemic halted these young new mutants’ plans.

Heaven knows how they fared in their A-levels!

We’re in a hospital-prison combo, a suitably spooky abandoned building repurposed for guarding and treating ‘new mutants’: superheroes, with a variety of dangerous growing pains, like Dani. 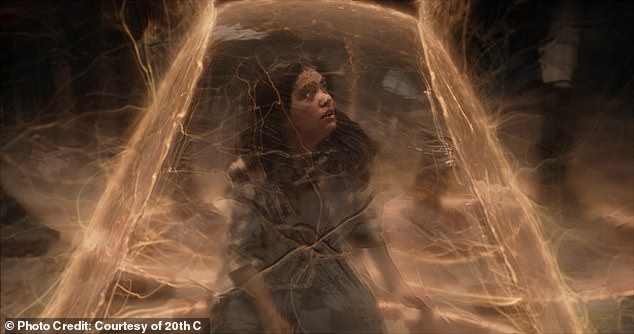 The New Mutants is the 13th X-Men outing, originally slated for release two years ago, among the new superheroes is Dani, above

After her dad has been despatched by a demon bear tornado (stay with me), Dani wakes to find herself trapped in this facility and, even worse, surrounded by a standard school-drama array of archetypes.

They fight but ultimately end up getting off with each other in pools and graveyards.

The Doctor guarding (or maybe controlling) them doesn’t instill much confidence: ‘I come from a family of doctors. My mother was a vet.’

Game Of Thrones’ Maisie Williams plays a frumpy wee Scottish girl who has a habit of turning into a wolf.

Anya Taylor-Joy (Emma) is reduced to complicated Russian and doesn’t move much beyond it.

And Blu Hunt, as our chief protagonist and most troublesome mutant Dani, makes her celluloid debut with almost no discernible enthusiasm or charisma.

In fact, The New Mutants feels like a Disney Channel TV movie from the early 2000s in its scripting and performances, with comfortingly predictable individual story arcs and plodding dialogue. 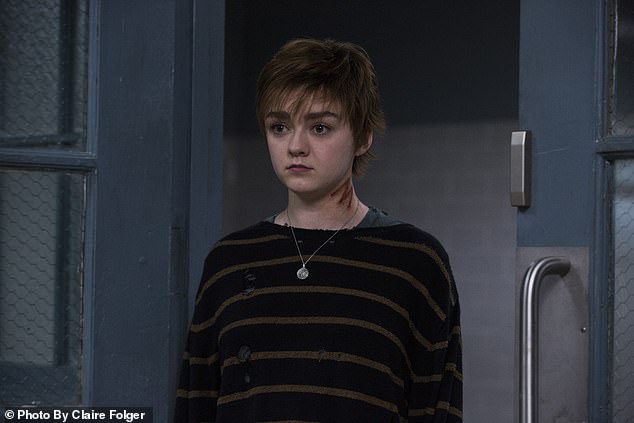 Game Of Thrones’ Maisie Williams plays a frumpy wee Scottish girl who has a habit of turning into a wolf.

Dani is both under threat and the source of all the mutants’ eventual misery, but none of this tension is communicated in any way that you can feel, sitting in a freshly fumigated cinema.

Her dad dies. I felt nothing.

A giant demon bear of her own magical creationrampages through the hospital.

If you’ve already ploughed through a dozen of these, this latest might tickle your fancy.

But for non-committal passers-by of the franchise, it’s probably not worth leaving your support bubble for