They say love occurs at first sight, but a new study suggests the actual time for romance to blossom is around two minutes.

Researchers in Israel have investigated how skin sweat and physical movements change when men and women meet during speed dating.

Couples who were interested in each other romantically had similar skin sweat rates – an indicator of being biologically ‘in sync’ – within two minutes, they found.

According to researchers at the Hebrew University of Jerusalem (HU), who conducted speed dating experiments, found what attracts some people, but not others depends on how in sync they are just minutes into the outset of the encounter (file photo)

Researchers found that couples who were interested in each other were biologically in sync.

This was determined by hooking the men and women up with wristbands that measure electrodermal activity, also known as skin conductance.

Interested couples also synchronized their physical movements throughout the date – such as smiling, nodding and moving arms and legs.

The new study was conducted by academics from the Hebrew University of Jerusalem (HU) and published in the journal Scientific Reports.

‘Connecting with a partner depends on how well we can synchronize our bodies,’ said study author Dr Shir Atzil at the Department of Psychology at the Hebrew University in Jerusalem.

‘The study showed that within two minutes into the date, physiological synchrony is predictive of the romantic interest.’

The processes behind pairing off with a mate – known as mate selection – have long been a topic of scientific internet.

‘However, they do not explain how initial attraction temporally unfolds during an interaction, nor account for mutual physiological or behavioral adaptations that take place when two people become attracted,’ the study authors say.

For the study, the experts recruited 32 heterosexual undergraduate students – 16 men and 16 women – interested in a romantic relationship. 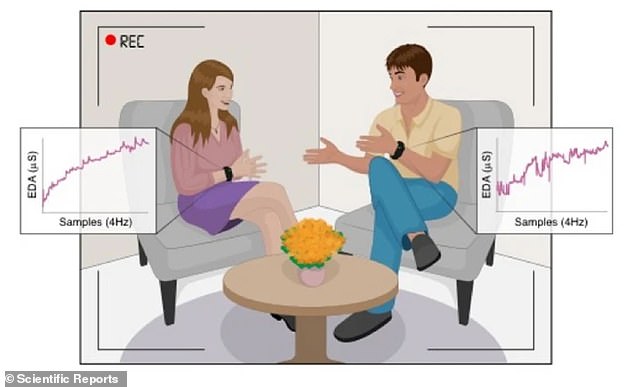 This illustration shows the experimental set-up – volunteers were filmed as they had a date lasting five minutes. Electrodermal activity was also recorded using wristbands

Electrodermal activity refers to changes in the resistance of the skin to electrical current based on sweat gland activity.

This is because sweat contains electrolytes such as sodium and chloride, which makes our sweat a good conductor of electricity.

Sweating is controlled by the sympathetic nervous system, and skin conductance is an indication of psychological or physiological arousal.

The experiment was conducted in three experimental runs of 16 dates, in which a male and a female met for a five minutes. A total of 46 dates were included in the analysis.

As they met and chatted, the participants had their electrodermal activity recorded through the use of Empatica E4 wrist bands.

Electrodermal activity refers to changes in the resistance of the skin to a small electrical current based on sweat gland activity.

Behavioral movements, such as nodding, moving an arm, shifting a leg were also recorded in each partner during the dates.

Following the encounter, each couple revealed the romantic interest and sexual attraction they felt for each other.

Researchers found that successful dates – ones that resulted in a positive match – showed synchronized electrodermal activity within the first two minutes.

‘The study clearly showed that when couples synchronize their physiology with one another and adapt their behavioral movements to their partner during the date, they are romantically attracted to one another,’ said Dr Atzil.

Interestingly, the degree of synchrony affected romantic feelings of men and women differently. 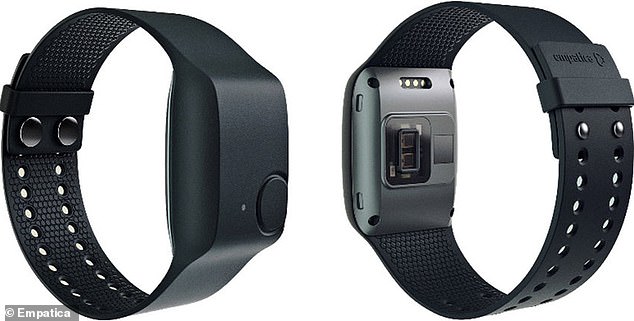 As they dated, participants had their electrodermal activity recorded through the use of Empatica E4 wrist bands (pictured)

Although synchrony predicted attraction for both sexes, women were more sexually attracted to men who showed a high level of synchrony.

These ‘super-synchronizer’ males were rated as highly desirable by female partners.

‘Our research demonstrates that behavioral and physiological synchrony can be a useful mechanism to attract a romantic partner,’ Dr Atzil said.

Previous studies have already shown that couples that are interested in each other are biologically in sync.

Researchers at Leiden University in the Netherlands reported last year that in-sync sweating and heart rates are strong indicators of a romantic attraction.

A 2010 study by experts at University of Texas at Austin also found couples mimic each other’s language during conversations.

DEATH OF THE ‘TRADITIONAL’ DATE? ONLY A THIRD OF DATES NOW INVOLVE THE MAN ASKING THE WOMAN OUT, PAYING, AND INITIATING SEX, STUDY REVEALS

Traditionally, men have dictated proceedings during a romantic encounter, but a new study suggests this could finally be changing.

Researchers in Kansas have analysed data from a survey of more than 20,000 heterosexual college students describing their most recent date.

They found that only around a third of dates (36 per cent) now involve the man asking the woman out, paying, and then initiating sex.

This is something of a ‘traditional’ model of dating, but it may be getting replaced by a more equal model between the sexes, where the woman is initiating sex and even paying for dinner.

The academics also found that women are more likely to have sex on the first date if they were the one who initiated the date.