New Yorkers have been urged to get their flu jab ‘as soon as possible’ as the state grapples with nearly four times as many cases as last year.

The New York Department of Health described the current outbreak as ‘early and aggressive’, and warned that it showed no signs of slowing.

There are were 596 confirmed flu cases recorded in the week ending October 1 — compared to just 150 this time last year.

Both figures are massive underestimates because flu is not routinely tested for in the same way Covid is.

Experts fear the early surge in flu – which is also happening in Washington D.C. and several southern states – will cause a ‘twindemic’ this winter when Covid is expected to rebound.

There has been barely any flu for the past few years after the virus was sidelined by the more infectious Covid virus and lockdowns shut it out also.

Washington DC joins Texas in the ‘high’ flu activity level, according to CDC data. Since the map was made, New York State cases have spiked and are now four times what they were last year 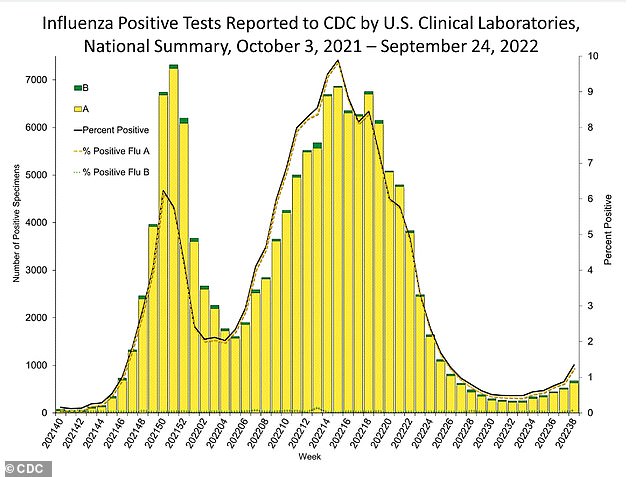 CDC shows flu cases are on the rise, while experts are anxious a twindemic of both Covid and flu may be on the horizon 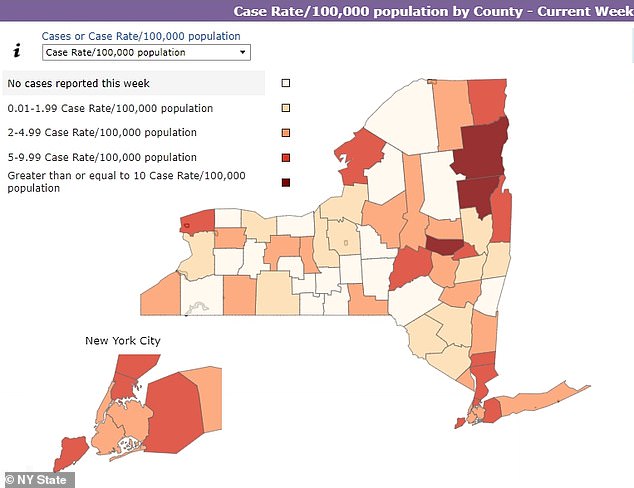 Flu case rates in New York State for the week ending 25 June 2022. This is the last week the New York State holds data for, but an online seasonal dashboard is due to go live at the end of October 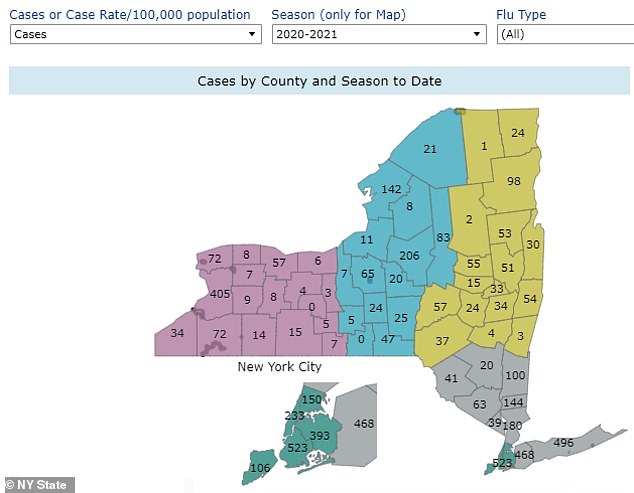 Flu prevalence in New York State in 2020-2021, according to the state’s flu tracker 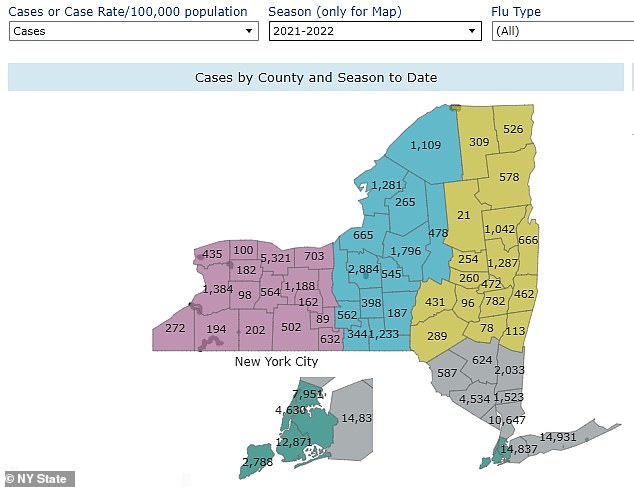 Flu prevalence in New York State in 2021-2022, showing a huge increase from 2020-2021. Experts are expecting a further increase for the current flu season

Where did the flu go the past two years… and is it already back?

The flu’s spread was massively curbed over the first two years of the COVID-19 pandemic.

Viral interference from Covid combined with mitigation measures like masking and restrictions on indoor events led to little spread of the virus.

As a result, many did not build up natural immunity to the virus in the past two years and have neglected getting their yearly jab.

Dr Anthony Fauci, the nation’s top infectious disease expert, issued a warning about the rampant spread of the flu in the Southern Hemisphere in August.

New York and some southern states like Texas, Georgia and New Mexico are already experiencing surges of the virus in September – before flu season even officially starts in October.

NY’s hotspot areas are the New York City/Metropolitan region, the Capital District and central New York, with 57 per cent of the cases recorded by upstate counties.

Flu season typically runs from late October to May, peaking in winter.

But September’s figures are higher than usual, the Department of Health said, with cases still growing week by week.

As of Monday, 44 New York counties were reporting people with flu.

Officials consider this widespread as more than half of the state’s 62 counties have been hit by the virus.

New York State health commissioner Dr Mary Bassett said in a statement: ‘I urge all New Yorkers to protect themselves and their family and friends by getting a flu vaccine as soon as possible.

‘With the early and aggressive spread of influenza, the annual flu shot is the most effective protection against serious illness.

‘The Covid booster can also be administered at the same time as the flu shot to further protect your health and those around you.’

Citizens should get the jabs ‘as soon as possible, earlier than perhaps they typically would’, the Department said.

New York tracks flu activity on an online seasonal dashboard which is due to go live at the end of October.

The latest data shows 45.5 per cent of all American adults and 50.1 per cent of New Yorker adults are vaccinated against flu.

It comes amid fears of a ‘twindemic’ in the US this winter.

Both are contagious respiratory infections with overlapping symptoms, making it tricky to tell between them.

The flu was largely wiped out over the past two years of the pandemic when lockdowns, working from home and the far more transmissible Coronavirus limited its ability to spread.

A lack of exposure to the pathogen over the past two years has left the immune system of many Americans unprepared for the flu, increasing the risk of a more severe infection.

There are already early signs the flu is making a comeback with large rises across the US south in recent weeks, with Texas reporting a tripling in cases from September 8 to 29.

Dr Luis Ostrosky, chief of infectious diseases with UTHealth Houston and Memorial Hermann, told DailyMail.com that the figures seen in Texas are usually not experienced until the peak of flu season in December.

The Centers for Disease Control and Prevention (CDC) is reporting moderate flu activity in Georgia and New Mexico as well.

Florida also reported an unusual surge of the virus over summer that has since tapered off.

Washington D.C. is also experiencing what the agency describes as the worst outbreak in the nation right now.

Only a few hundred flu cases were confirmed by health officials nationwide in September, though figures were significantly underreported.

As colder weather pushes more Americans indoors, experts fear the virus will begin to rampantly spread among an under-prepared population.

If previous winters are anything to go by, Covid cases are also bound to erupt this winter as well — with the latter halves of 2020 and 2021 seeing spikes.

Officials say poor vaccine uptake — just one per cent of eligible Americans have had the new Omicron booster — means there is still scope for a deadly Covid outbreak, even with the milder BA.4 and BA.5 subvariants.

The American Academy of Pediatrics (AAP) even recommended parents give their children two flu shots this year if they have never received the annual jab before.

While House Covid response coordinator Dr Ashish Jha said at the start of the month that: ‘I really believe this is why God gave us two arms, one for the flu shot and the other one for the Covid shot.’

Less than half of US adults plan to get the flu jab, finds survey

Only 49 per cent of adults said they were intending to get the flu vaccine, despite over 60 per cent agreeing the jab is the best way to protect against death and hospitalization.

1,005 American adults completed the survey from the National Foundation for Infectious Diseases in August this year.

41 per cent said they were unsure or do not plan to get the shot during the upcoming flu season.

The most common reasons for not getting vaccinated included thinking vaccines do not work very well and being concerned about potential side effects.

Others said they never get the flu or are worried about getting flu from the vaccine.

And one in five Americans who are more at risk of complications from flu said they won’t get the jab.