Investing in emerging markets is often a step too far for investors with an ethical bent. Human rights issues and exploitation of labour put them off. Nowhere in the emerging markets world are these issues currently more prominent than in China, still the engine room of the world’s economy despite its problems grappling with the Covid pandemic.

Its appalling treatment of the Uighurs in the north-western region of Xinjiang, together with its intimidation of near neighbour Taiwan and refusal to denounce Vladimir Putin’s war on Ukraine, means UK investors are shunning the Chinese stock market in droves.

FundExpert, a London-based investment research company set up by Brian Dennehy, recently polled its customers on their attitude to investing in China. The question was a straightforward one. ‘Do you agree that investors should avoid investing in China due to its inaction over Russian aggression in Ukraine?’ It included India in the poll (India has also refused to condemn Russia).

On the march: Some 71 per cent of FundExpert’s customers said the Chinese (and Indian) stock markets should be shunned

Some 71 per cent of FundExpert’s customers said the Chinese (and Indian) stock markets should be shunned.

It’s a view that Dennehy now shares. ‘Personally, I wouldn’t invest in the stock markets of either of these two countries, although I think no less of the 29 per cent of my clients who would still invest.

‘In fact, the markets of both countries look attractive from an investment point of view, especially in China where there are stirrings of economic recovery.’

Jason Hollands, a director of wealth manager Tilney, is another China sceptic. ‘Yes, China is the world’s largest emerging market and the second biggest economy,’ he says. ‘So it can be argued it’s too big to ignore from an investment point of view. But there is no disguising the fact that it is an authoritarian single-party Communist state.’

Hollands’ charge sheet against China is a long one. He says China’s human rights record is a ‘real concern’, not only in Xinjiang but also in Hong Kong where political and press freedoms have been eroded. He also says its ultra-draconian approach to lockdowns would not be tolerated in any free society – while it remains the world’s largest carbon emitter, responsible for almost 30 per cent of global emissions. And, of course, there is the war in Ukraine which it fails to condemn.

With regard to investing in Chinese-listed companies, Hollands says investors need to be mindful that many have the state as significant shareholders with ‘boards stuffed with Communist Party officials’.

He adds: ‘China may have adopted the veneer of free market capitalism, but the state can intervene at any point.’

In the past year, a crackdown on the business activities of leading tech companies such as Tencent and Alibaba – widely held by many UK fund managers running global or emerging markets funds – has led to sharp share price falls.

Similar crackdowns cannot be ruled out in the future as China keeps a lid on capitalism. So, is China a pariah investment market that investors should avoid as Dennehy and Hollands suggest. Or can you invest without necessarily selling your soul?

Pruksa Iamthongthong is manager of investment trust Asia Dragon, a £530million fund that invests across Asia. Nearly a third of its portfolio is in Chinese companies with Tencent and Alibaba among its top 10 holdings.

‘Now is the time to invest in China,’ she says, pointing to the fact that foreign investors – fund managers and pension funds – are investing billions of pounds once more in Chinese shares via Hong Kong. ‘While stock market conditions are likely to remain volatile over the near term, China’s long-term growth potential remains intact,’ she insists.

The stock market is cheaper than it was. Since early February last year, when Chinese stock markets peaked, investors have suffered average losses in excess of 40 per cent. Those who invested in socalled ‘growth’ stocks, such as technology businesses, have been hit the hardest, incurring losses of 50 per cent plus.

James Carthew, head of investment companies at research group QuotedData, says that a combination of circumstances have contrived to ‘unnerve investors’, causing the market falls in China.

These include the state’s dramatic interventions in some sectors including education, where it banned firms from making profits. He adds: ‘At the same time, the Chinese state backed itself into a corner by enforcing a strict zeroCovid policy with severe travel restrictions, factory closures and disruption to supply chains.’

From a Western perspective, Carthew says it is hard to understand why China acted in this way. ‘It may look as though China repeatedly shot itself in the foot,’ he explains. ‘From the state’s point of view, it is trying to rein back some of the excesses in the economy that have widened the gap between the rich and poor and threaten to create dissent against the ruling Communist Party.’

Despite many unattractive traits, China remains economically influential. ‘It used to be said that if the US sneezes, the world catches a cold,’ says Carthew. ‘Today the same could be said of China. Can investors afford to ignore it? That’s the big question.’

Dzmitry Lipski, head of funds research at wealth manager Interactive Investor, says China is a key part of the global economy, meaning investors need to consider having some exposure when building a balanced portfolio.

James Thom, manager of Asian investment trust New Dawn, says: ‘The near term remains challenging, with numerous headwinds, but the long-term story remains strong. China has a growing middle class which should drive the economy forward.’

Thom is a fan of ‘premiumisation’ – where, as Chinese consumers get richer, they buy more high-end items. As a result, he invests in consumer-focused businesses, specialising in areas such as car sales and the running of duty-free stores.

He points to Kweichow Moutai, a spirits business, that continues to thrive despite the wider economic slowdown in China. ‘Its share price is up 100 per cent over the past three years,’ he says, ‘and the business’s long-term growth prospects remain attractive.’ 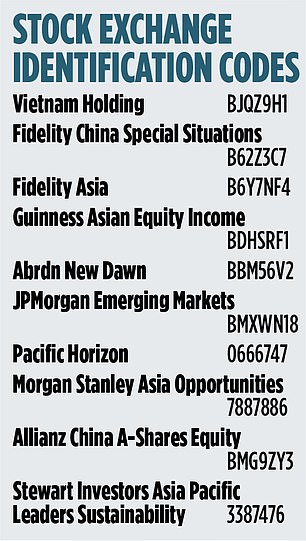 An adroit way of approaching China from an investment perspective is to invest in funds with exposure to numerous Asian economies.

Some neighbouring countries have been beneficiaries of China’s zero Covid stance and its geopolitical posturing. For example, Vietnam has attracted inward investment from international companies which previously had manufacturing operations in China.

‘Vietnam was one of the few economies in the world to grow during the pandemic,’ says Carthew. ‘The result is that locals are getting richer – consuming more, opening bank accounts and investing for the first time.’

Investment funds specialising in Vietnam include Vietnam Holding (up 30 per cent over the past year) and VinaCapital Vietnam Opportunity (up six per cent).

Abrdn’s Pruksa Iamthongthong says Thailand is another economy set to grow again as tourists return. Indonesia, meanwhile, has benefited from rising commodity prices – commodities such as oil and gas account for around 60 per cent of the country’s exports.

Rob Burgeman, at wealth manager Brewin Dolphin, believes investors should only invest in China through a broader Asian fund. His preferred choices are investment trust Pacific Horizon (managed by Baillie Gifford) and fund Stewart Investors Asia Pacific Leaders Sustainability. They have respective exposure to China of 25 per cent and six per cent.

WHERE TO INVEST IF YOU REALLY MUST

Investment funds that specialise in China include Allianz China A-Shares Equity. Its portfolio is skewed towards the domestic economy, rather than companies that derive their earnings overseas. Its shares are down 18 per cent this year.

Lipski suggests Fidelity China Special Situations. The fund is down 36 per cent this year, but up by the same amount over three years, demonstrating just how volatile investing in China can be.

Lipski says the fund focuses on ‘faster growing, consumer-orientated companies with robust cash flows and capable management teams’. He warns the fund is a volatile one and should only be a smaller satellite holding as part of a larger, well-diversified portfolio.

The last word goes to Tilney’s Hollands. He says investors should consider ‘the opportunities on their own doorstep’ rather than flirt with China.

He says: ‘The UK stock market has plenty of exposure to sectors such as energy, materials and consumer staples which typically do well in an environment of high inflation and lower growth.

And he adds: ‘And before you invest in China, remember: the taxes applied to company profits in China ultimately finance a repressive state.’