EXPRESS INFORMER > News & Politics > Irish traveller, 26, reveals she was forced to have an arranged marriage at age 16

Irish traveller, 26, forced to marry another teenager on her 16th birthday reveals it was the ‘worst day of her life’ – and was divorced with three children by 23

An Irish traveller has claimed that she was forced to have an arranged marriage at age 16, which led to having three children and a divorce by the time she was 23.

Bridget Walls, 26, believed to live in London, explained that she didn’t know who she was getting married to until she got to the church, and that the wedding her parents planned for her at age 16 was the ‘worst day’ of her life.

Posting on TikTok, Bridget shared photographs from the day she married a teenage boy who was also 16.

Bridget Walls, 26, (pictured) who lives in Ireland, has racked up over 60,000 followers on TikTok since she began sharing her life within the traveller community

Bridget, who boasts more than 60,000 followers on the app, explained that opening up about her experience on social media has changed the way she is viewed by other people within her community.

Among her revelations about life as a traveller is that arranged marriages are not uncommon because families don’t want their children marrying people outside of the community.

Bridget said: ‘I was forced to get married. I didn’t even know about my own wedding until that day. I didn’t know I was getting married until the morning of my 16th birthday and I woke up, there was a big white wedding dress. I was forced to be married.

‘It didn’t really work out good. I got divorced at 23. It wasn’t a good marriage but I was a child. I shouldn’t have been forced into it. It is what it is.’ 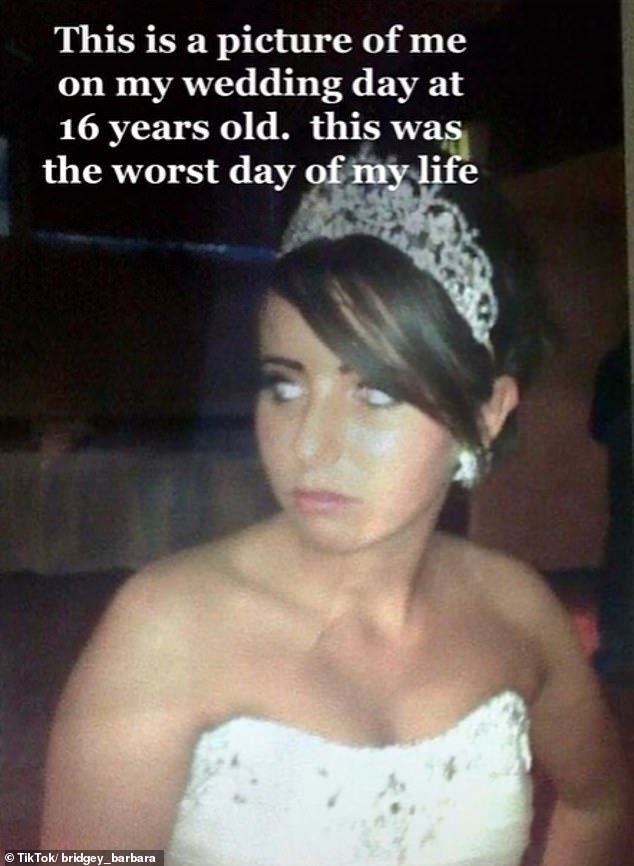 Bridget said parents within the traveller community choose their child’s partner because they don’t want them to marry outsiders. Pictured: Bridget on her wedding day

Bridget answered a follower’s question about why parents arrange marriages, saying: ‘The reason is because they don’t want their kids to marry out of the travelling community.

‘They pick who they want for their children because they like that family and they know them well.

‘Sometimes they even marry their own first cousins, but that’s very rare. That’s like years ago kind of stuff, they don’t have to do that anymore. Some people do still do arranged marriages and there’s nothing the girl can do – have to listen to the parents.

‘Now girls can choose whoever they want, but they have to marry a traveller.’

‘Travelling girls are raised up to look after men and do what they are told. Don’t answer back or they get a slap.

‘Men can literally do whatever they want. If a woman does something wrong, she’s like outcast from the family. No one wants to talk to her and she’s an embarrassment to the family.’

She added: ‘The person I hate most in the world I wouldn’t wish to go through what I’ve been through. I’ll never have that for my children. I’ll never want my children to get married young. I want them to be their own person and be what they want to be in life. 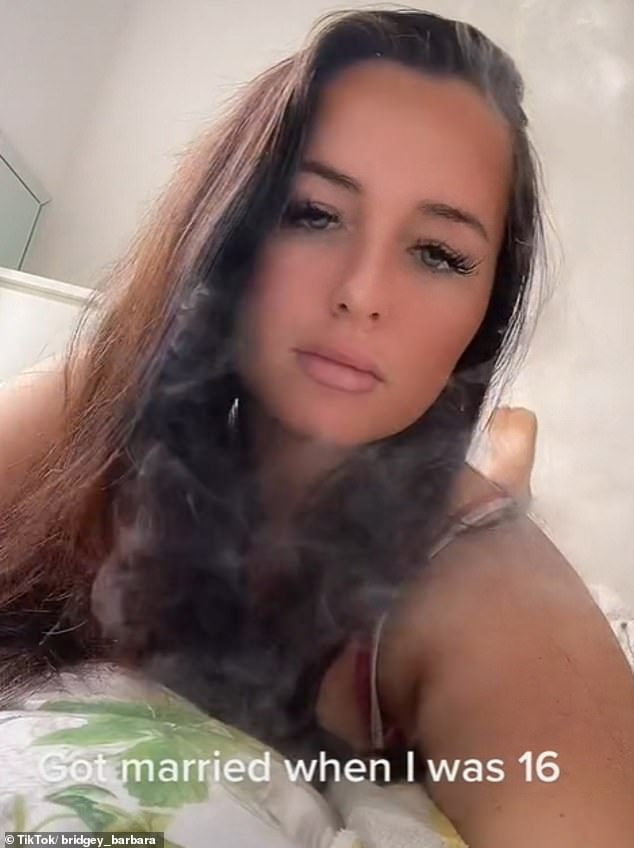 Bridget (pictured), who was pulled out of school age 12, said she will let her children have their full education and support their dreams

‘I’m going to support their dreams and support what they want to be. The travelling community are dream crushers. When I was younger I wanted to work in a nursery and look out for children, but I was pulled from school when I was 12.

‘I’m going to support my children in their full education and support them to be whatever they want to be in life.’

Bridget has received a flood of support in response to her videos, with many well-wishers hoping she finds a new husband in the future.

One person wrote: ‘I’m so sorry you had to go through that. Wish people realised just how much this happens to young teen girls.’

‘I’m so sorry this happened to you! Maybe one day you can have the perfect wedding with a perfect husband,’ another said.

A third added: ‘Oh my goodness! That’s terrible! I’m so sorry. I hope you are ok now.’