It was a ten-hour standoff at sea that culminated in nine minutes of ruthless, military precision.

Two heavily-armed squads, wearing night vision goggles and thermal imaging equipment, rappelled down ropes from choppers at either end of the tanker before converging on seven Nigerian stowaways who quickly surrendered.

As police continue to question the suspects, the Mail charts the build-up to Sunday night’s flawless operation:

Two weeks ago: Three Nigerian stowaways are pictured on a tanker’s rudder a fortnight ago

The seven stowaways slipped on board the Nave Andromeda shortly before the oil tanker left the Nigerian port of Lagos three weeks ago, on October 6.

After a brief stop off the coast of Saint-Nazaire in France it was heading to collect gasoline from Fawley Oil Refinery near Southampton when the drama unfolded.

The stowaways presence became known to the crew at some point during its 20-day voyage to Britain.

Officials are working on the assumption that they boarded though the rudder trunk of the vessel.

‘Security in Third World ports is not as high as in the West, so it is relatively easy to get through perimeter fences,’ maritime expert David Osler said. ‘International Maritime Organisation guidelines mandate search of vessels prior to departure, but sometimes stowaways slip through.’

The captain was lauded for his ‘exemplary response and calmness’ by the ship’s owners, Navios Tanker Management.

At around 9am on Sunday, the captain of the 42,000-ton tanker, a Greek-owned vessel which flies the Liberian flag, sent out a mayday distress signal six miles off the Isle of Wight when the stowaways allegedly started making threats to kill the crew. Tensions flared when the crew tried to lock the seven men in a cabin, having told them that they would be following protocol and informing authorities of their presence. 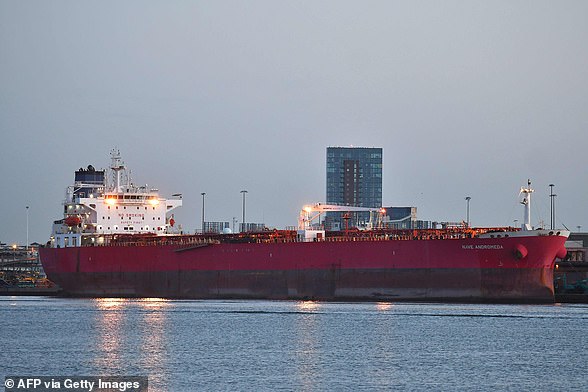 In a 21-second call which was released yesterday, the Greek captain begged ‘immediate assistance’ and described how the men were on the loose.

In heavily-accented English, he said: ‘The stowaways go outside, I see four person port side, midship, near to the manifold, and I have two of them starboard side on the bridge. I try to keep them calm but I need immediately, immediately agency assistance.’

The captain and 20 other crew members took refuge in the ship’s citadel, an emergency room used during pirate attacks, after the migrants ‘smashed glass and made threats to kill’.

From here they could control the ship and communicate with the authorities. Only the engineer, another Greek national, did not retreat to the citadel. The engineer remained in the engine room taking instructions from the master. A source said: ‘The captain clearly stated he feared for their lives and needed urgent assistance, they needed rescuing. It was desperation, you could hear the fear in his voice.’

The ship’s operator, Navios Tanker Management, said: ‘Navios would also like to pay tribute to the master of the Nave Andromeda for his exemplary response and calmness and to all the crew for their fortitude in a difficult situation.’

An hour later Hampshire Police receives reports regarding ‘concerns for the safety’ of the crew who had received ‘verbal threats’.

The ship had been due to dock at Southampton at 10.30am – but the captain decided the situation was too dangerous to approach the port. Instead, he steered the tanker on a circular and zig-zag course off the Isle of Wight to play for time. 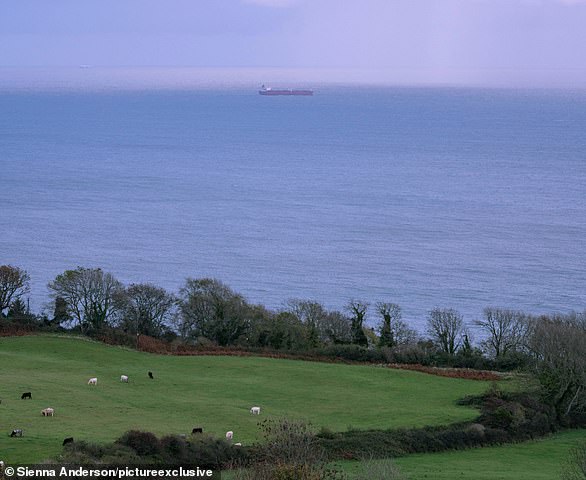 The Nave Andromeda was built in 2011 and weighs 42,338 tonnes. It was last known to be docked in Lagos, Nigeria on October 6 (pictured: The ship off the Isle of Wight on Sunday)

An exclusion zone of three nautical miles was set up around the ship. By 5pm Hampshire constabulary had submitted a formal request to the Ministry of Defence for military support. The Royal Navy was given command of the operation and was given authorisation to use armed forces to board the tanker by Defence Secretary Ben Wallace and Home Secretary Priti Patel.

Throughout the afternoon, two coastguard helicopters flew overhead, monitoring the situation. On land, an armed unit of police set up a station on the Isle of Wight. Richard Meade, of the Lloyd’s List Intelligence maritime service, said: ‘Seven stowaways were discovered on board. The crew tried to detain them in a cabin, but the stowaways did not want to be locked away in a cabin and became violent and that raised the security alarm.’

After taking control of the mission, naval chiefs acted quickly to assemble an astonishing array of firepower.

A Chinook helicopter collected SBS troops and fast assault craft from the elite unit’s HQ in Poole in Dorset, some 15 miles away, and stationed them just out of sight of the Nave Andromeda.

The frigate HMS Richmond was put on alert in the Channel and divers were assembled in case explosive mines had been placed on the ship’s hull, sources said. Shortly before the attack the captain of the tanker was asked to put the lights out and turn into the wind to prepare for the arrival of the special forces.

At around 7.30pm – just over 10 hours after the first mayday call –military chiefs ordered the attack.

A formation of helicopters swooped in, deploying a deafening din and dazzling lights, known as ‘obscurant’ tactics, to disorientate the stowaways on board. The plan was to ‘overwhelm them with the noise of the rotor discs, and put a lot of light in to blind them’, a source said. 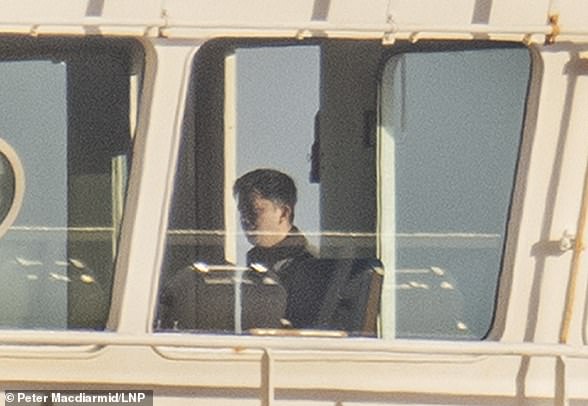 The Special Boat Service (SBS) raided the tanker yesterday evening off the Isle of Wight after stowaways were found on board who threatened the crew. Pictured is an official on the boat

At least one Wildcat helicopter, fitted with an electro-optical device to aid its night vision, swept the deck for signs of hostile behaviour. Troops on landing craft approached and scanned the tanker with sniper rifles. Two Merlin Mk 4 helicopters then approached in ‘dark mode’ and took positions above the bow and stern of the ship.

Eight SBS troopers rappelled by rope onto the deck at each end and converged on the middle of the ship in a pincer movement.

Wearing night vision goggles with thermal imaging to detect human heat sources, the units closed in on the seven stowaways who were grouped in one place on the deck.

They were not thought to be armed and surrendered swiftly.

It took the SBS less than nine minutes to arrest the suspects, secure the tanker and lead the crew out of their panic room. Some 40 minutes later the Ministry of Defence confirmed that the forces ‘have gained control of the ship and seven individuals have been detained’. The seven Nigerians were promptly arrested on suspicion of seizing or exercising control of a ship by use of threats or force.

They all remain in custody at police stations across Hampshire.

Investigators are speaking to the crew members to establish the exact circumstances of what happened. The ship, which can carry up to 42,000 tons of crude oil, is now in the port of Southampton. 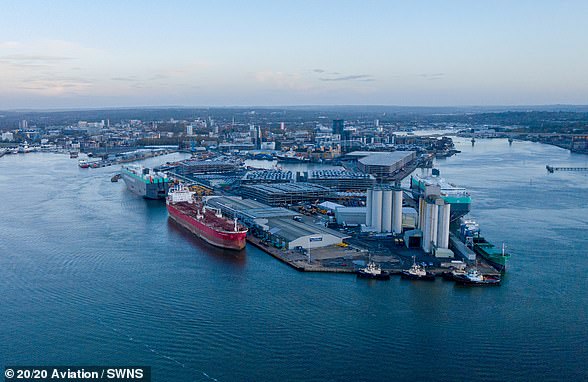 An aerial photo showing the Nave Andromeda docking at Southampton at around 2.30am following Sunday’s dramatic events

Defence Secretary Ben Wallace paid tribute to the courageous personnel who braved ‘dark skies and worsening weather’ to ensure the safety of the ship’s crew.

Former Rear Admiral Chris Parry said: ‘From the time the helicopters went in and the SBS roped on to the ship, they rounded up the people pretty quickly.

‘I think the stowaways themselves accepted this was probably the end of the journey for them and there probably wasn’t any point in resisting heavily-armed men approaching them.’

A Hampshire police spokesman said: ‘The vessel had been travelling in the direction of Southampton, having sailed from Lagos in Nigeria. It was reported that a number of stowaways were on board, and they had made threats towards the crew.

‘Following a multi-agency response by police, with support from the military and other emergency service partners, seven people were detained by police. All 22 crew members are safe and well.’