The Defense Advanced Research Projects Agency (DARPA) is working on an ‘invisibility cloak’ made of a smoke-like obscurant that conceals US troops from enemies, which would replace the controversial white phosphorus that has burned the flesh off human bodies.

The new war tool is still in early stages, but the ‘smoke’ could consist of liquid aerosol spray or engineered material, but DARPA states the obscurants will be ‘deployed in specific ways to allow one-way vision through the plume.’

The US military uses white phosphorus to create a smoke screen, but causes severe burns upon contact with the skin that can last up to eight hours – making it dangerous to American troops and civilians caught in the crossfire.

DARPA’s new obscurant would be safe to not only come in contact with, but also inhale. The current obscurants require troops using it to wear respirators on the field.

The new war tool is still in early stages, but the ‘smoke’ could consist of liquid aerosol spray or engineered material. It would make US troops invisible to enemies, but work in a way they can still see their surroundings

The program, dubbed Coded Visibility (CV), began in July 2022 and is set to run for the next 54 months.

DARPA has selected several US universities to research, develop and test obscurants that meet its criteria.

In both technical areas, teams will also develop new obscurant modeling and simulation tools to engineer plumes and assess performance against sensors. 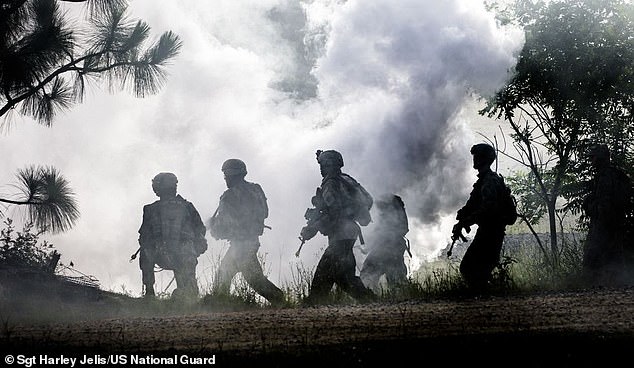 DARPA wants the smoke (stock photo) to be tunable, allowing troops to shift its movements

Rohith Chandrasekar, CV program manager in DARPA’s Defense Sciences Office, said in a statement: ‘The teams we selected aim to develop new types of non-hazardous obscurant particulates that can be tailored to provide asymmetry – that is to allow US and allied forces to see the enemy through the plume in one direction, while the adversary is unable to see through the plume in the opposite direction.

‘We are also exploring a more fundamental challenge of demonstrating active asymmetry, which only requires a single obscurant material, but one that can be tuned in real time to potentially enable dynamic control of its properties after being deployed and in cooperation with sensors.’ 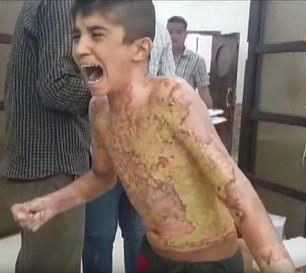 The goal of this project is to eliminate the use of white phosphorus that ‘burns to the bone,’ which was recently used in 2019 in Syria – and horrifying footage of the mayhem were of severely burned children (pictured)

The goal of this project is to eliminate the use of white phosphorus that ‘burns to the bone,’ which was recently used in 2019 in Syria – and horrifying footage of the mayhem were of severely burned children.

The footage was taken when Turkey was bombing the Kurds and although the nation is banned from using chemical weapons, Hamish de-Bretton Gordon, a British chemical weapons expert, said the burns appeared consistent with white phosphorus.

The clip features a young boy brought to a hospital in Tal Tamr, near the border city of Ras al-Ayn and whose skin appeared to have melted off his body.

As he is brought into the hospital he can be heard screaming ‘Dad stop the burning… I beg you’ before medics are able to give him a dose of morphine. He is thought to have spent 12 hours in agony before being treated.