Investors pulled £8.38billion from UK-focused equity funds in 2022, with every month seeing net selling activity, marking the worst year on record for the asset class, according to fresh data collated by Calastone.

The findings mean 2022 was the second consecutive year of outflows for UK-focused funds, despite the relative outperformance of the FTSE 100 over the period compared to global peers.

Edward Glyn, head of global markets at Calastone said: ‘2022 was a momentous year.

‘The sudden flip by central banks from floods of liquidity and cheap money to a barrage of rate hikes aimed at taming rampant inflation turned asset markets upside down.

‘There is a structural bias in the market towards fund inflows as we put money aside in our pensions and ISAs/savings plans, so such large outflows from equity funds in 2022 without a corresponding increase in other asset classes is a very large vote of no-confidence.’

He added: ‘Investors have sought out the safest havens they can find, taking refuge in cash and the perceived lower risk fund categories.’

According to the latest Fund Flow Index from Calastone, total investment fund flows were the weakest in at least eight years in 2022.

Equity funds were hardest hit, shedding £6.29billion over the course of the year, representing three quarters of selling volumes seen in the third quarter.

Within this diverse asset class some fund sectors, such as UK-focused funds, were hit much harder than others. 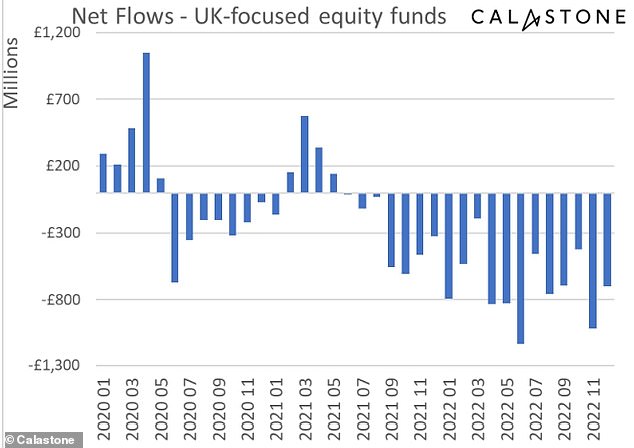 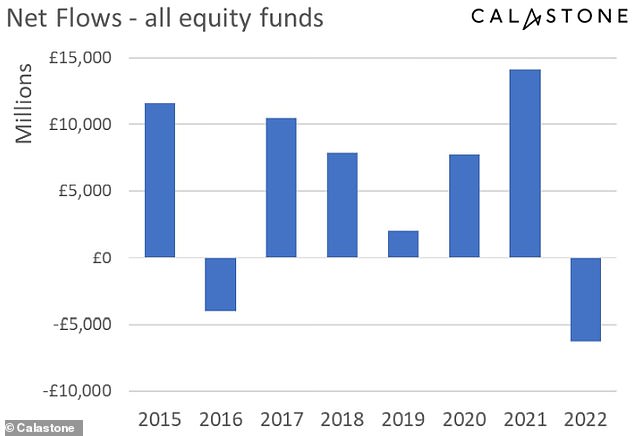 Equity funds: A chart showing net flows from all types of equity funds from 2015 up to the end of 2022

Elsewhere, investors offloaded £2.65billion worth of European funds, a record £1.17billion of North American funds – the first year of outflows since 2016 – and £1billion of Asia-Pacific funds.

However, global funds continued to attract new capital. Investors added a net £4.87billion into global funds, but this was ‘thanks entirely’ to ESG strategies, according to the report.

It said: ‘Global ESG equity funds attracted £6.35billion, while those without an ESG mandate shed £1.48billion.

‘Emerging-market funds enjoyed inflows of £647million, while equity income funds had their best year on Calastone’s record, reflecting their defensive qualities in times of recession and higher interest rates.

‘They still suffered outflows (-£427million for the year), but this compares to outflows more than ten times larger in each of 2020 and 2021 and far larger outflows in 2022 for non-income strategies.’

Passive equity funds endured a torrid time, seeing their first year of outflows on Calastone’s record, and faring worse than their active counterparts for the second consecutive year.

Passive funds shed £4.45billion in 2022, while active vehicles saw much smaller outflows of £1.82billion despite being far larger by assets under management.

According to the findings, global index funds suffered the biggest outflows of capital, at £3.26billion, while their active counterparts gathered net inflows of £8.13billion. The popularity of ESG helped bolster active funds’ net inflows, the report said.

Markets started to look somewhat brighter by November and December, amid hopes that the cycle of rate hikes from central banks might be nearing the end.

Rising inflation and higher interest rates have also been damaging for bond prices. Inflows continued to fixed income funds, but at £2.89billion for the year, they were lower than the £7.07billion inflow back in 2021, when rock bottom interest rates pushed bond prices higher.

Calastone added: ‘Investors were most positive on fixed income in the fourth quarter, adding a net £1.67billion. By this time, yields were significantly higher than at the beginning of the year (thanks to falling prices) so new investor capital into these funds will receive more interest income than at any point in the last 14 years.

‘The inflows also indicate that investors have begun to anticipate an end to the rate-hike cycle and so positioned themselves for a potential bond-market rally. Among other asset classes, mixed asset funds had their worst year on Calastone’s record attracting inflows of £1.16billion, while property funds saw outflows shrink by three quarters to £535million.’

Looking ahead, Mr Glyn, said: ‘Sentiment has improved markedly in recent weeks, but there is enormous uncertainty over the future course of interest rates and economic growth around the world and we may yet see the bear roar again before the bull market cycle can begin anew.

‘The expectation that the UK economy will suffer the worst recession among major economies has prevented the current burst of optimism spreading to UK-focused funds, however.

‘It’s tough for the industry. Fund management groups were hit with a double whammy – the supply of capital shrank as bond and equity markets fell, and the replenishment rate either reduced or went into reverse as investors either slowed their buying or fled for the safety of cash.

‘The resulting reduction in assets under management brought a significant hit to revenue. Nevertheless, with more of the pain focused on outflows from index funds, whose fees are lower, there is a trace of silver in the lining for active fund houses.’ 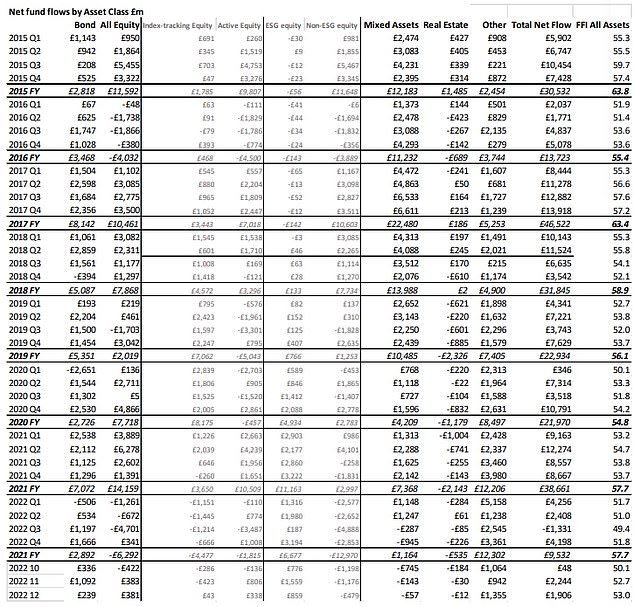