Gooey ‘rock snot’ that suffocates organisms living on the bottom of rivers and streams is invading Michigan waterways.

Formally known as didymo, this algae creates a mat that can grow over six inches thick and some have been observed to be two-feet-long.

While non-toxic, rock snot reduces habitat for macroinvertebrates that are an important food for the underwater ecosystem.

The algae can also survive for 40 days in cool, dark, damp conditions such as on angling equipment, neoprene and felt-soled waders and boots – anglers are encouraged to clean gear in Michigan after every use.

Despite its nickname, didymo does not feel slimy, but has a wet wool-like texture.

But it appears like goop as it clings to rocks and underwater plants.

Another issue of this invader is its ability to choke organisms that are food for other fish – specifically trout that are already threatened in Michigan. 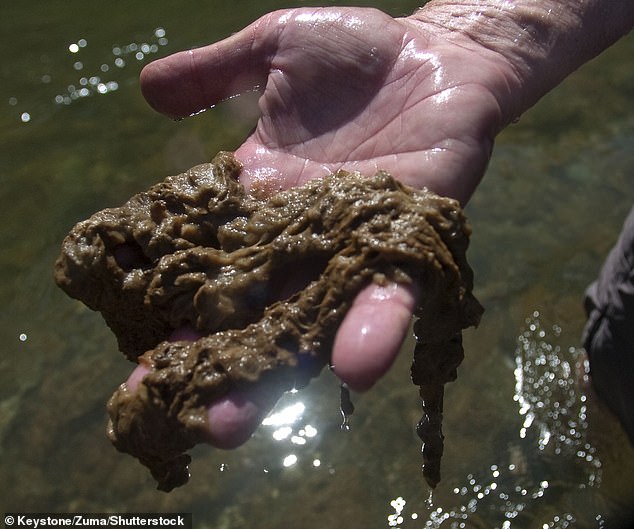 The algae can also survive for 40 days in cool, dark, damp conditions such as on angling equipment, neoprene and felt-soled waders and boots – anglers are encouraged to clean gear in Michigan after every use

And although didymo was first spotted in 2015, scientists are still working to figure out what triggers its blooms.

According to Michigan State ANR, researchers are still working to figure out what triggers didymo’s nuisance blooms.

They speculate that it is a result of changing environmental conditions, or it could be didymo spreading to new waterways on fishing gear, which is the common way nuisance species spread.

Researchers in Canada are connecting the large blooms to climate change; ice melting off the rivers earlier in the year and sooner springtime vegetation growth means fewer nutrients are naturally draining off into waterways.

‘That’s suggesting that if the land is holding the nutrients, there might actually be a decline in nutrients that’s causing these blooms. There’s some potential evidence for this in in the St. Marys River,’ Moerke said.

LSSU officials are also researching how the algae blooms impact macroinvertebrates and fish populations as an organism that is ‘reengineering the habitat.’ 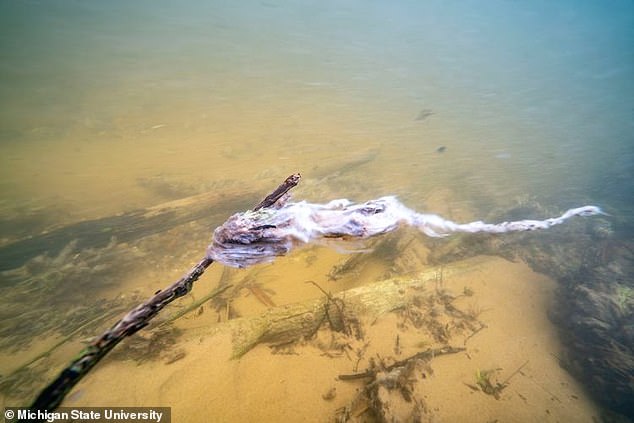 Despite its nickname, didymo does not feel slimy, but has a wet wool-like texture

‘There’s been a strong demonstration that macroinvertebrate communities have changed. What we haven’t been able to really determine well is the impacts on fish. There haven’t been nearly as many studies … because it’s much more difficult. Fish are very mobile. They can move out of a habitat,’ Moerke said.

The Manistee River, located in the lower peninsula of Michigan, is currently infested with the gooey algae.

Ann Miller, an aquatic biologist and avid Manistee River fly fisher, told 9and10news: ‘Right now, didymo is a big puzzle with a lot of people working to address it. We need to find out why it’s showing up where it is and more importantly, how best to decontaminate gear to prevent it from spreading.

‘Right now, many local fishing guides are doing their best to avoid the stretch of the Manistee where didymo is blooming but fishing is their livelihood.