An internet obsessive who amassed a stash of lethal weapons including a crossbow and machete has today been sentenced to 10 years in prison.

Gabrielle Friel was found with a high-powered crossbow, 15 bolts, a 12 inch machete and a ballistic vest and had made repeated internet searches over firearms.

The 22-year-old was sentenced today at the High Court in Edinburgh.

A second charge that he prepared for terrorist acts by researching spree killings, particularly those connected with incels – people who are involuntarily celibate – was found not proven.

Friel had denied both charges and gave evidence in his own defence during the case, saying mass shooting was a ‘fantasy’ for him.

He also said he ‘felt for’ incel mass murderer Elliot Rodger, who killed six people in a stabbing and shooting spree in Isla Vista, California, in May 2014 before killing himself.

Friel had told a doctor he wanted to ‘carry out a mass shooting’ and his social worker reported he appeared to ‘almost idolise’ Rodger.

He claimed he also wanted to commit ‘suicide by cop’ when he stabbed a police officer at Edinburgh College’s Granton campus in November 2017.

Gabrielle Friel, 22, has been convicted of having weapons including a crossbow and machete but cleared of plotting to carry out ‘a spree killing’ inspired by the ‘involuntary celibate’ movement

Friel was accused of having ‘expressed affinity with and sympathy for one incel-motivated mass murderer’ and to have expressed ‘a desire to carry out a spree killing mass murder’.

Incel followers blame attractive men and women for their inability to find a sexual partner.

The subculture first turned violent when American Elliot Rodger murdered six of his fellow students before killing himself at the University of California in May 2014.

The court was told he amassed weapons last summer because he wanted to commit ‘suicide by cop’ to help end his violent thoughts.

Social worker Sarah Drummond’s email to his psychiatrist Dr Alexander Quinn read: ‘[Friel] feels jealous of others and feels that no girls are interested in him.

‘He wants to project his anger on to the world and described media attention from mass killing as the the only way the world would take notice.’ 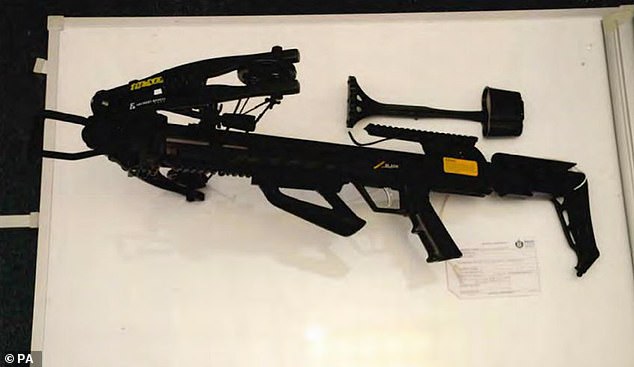 Friel, 22, was found guilty by majority of having a crossbow, scope, crossbow arrows, a machete and a ballistic vest at various locations in Edinburgh between June 1 and August 16 last year

The items and weapons, including the knife pictured above, were found at his home, a social work centre and a hospital, in circumstances giving rise to the reasonable suspicion that possessing these was for a purpose connected with terrorism 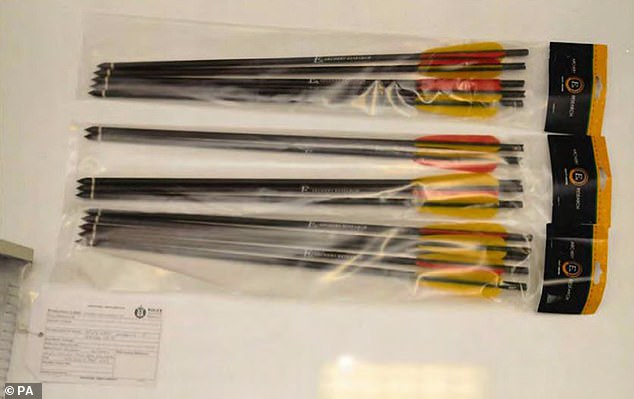 As part of this charge, Friel was accused of having ‘expressed affinity with and sympathy for one incel-motivated mass murderer’ and to have expressed ‘a desire to carry out a spree killing mass murder’. Pictured: The crossbow bolts recovered by police 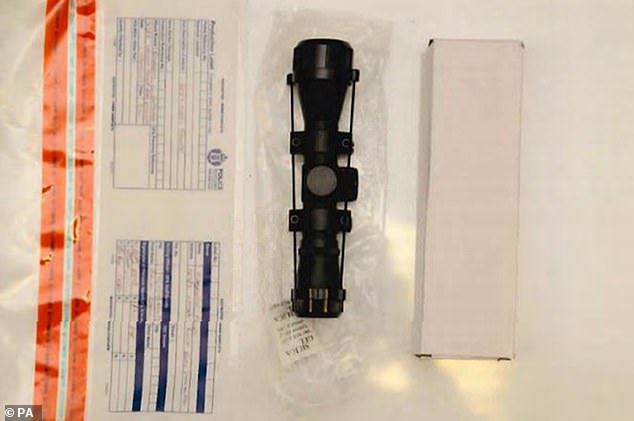 As well as the weapons, a telescopic sight was among the items recovered 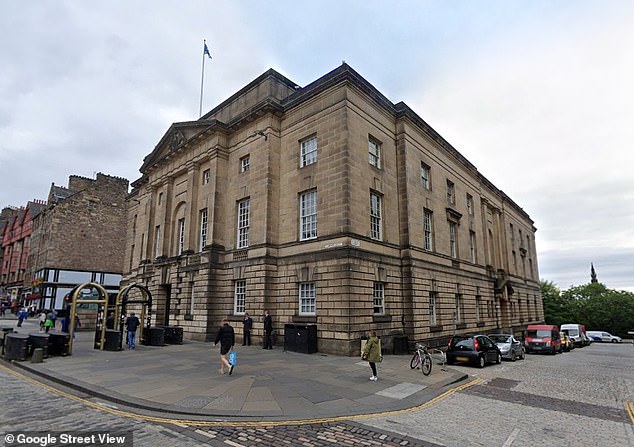 Assistant Chief Constable for counter-terrorism Pat Campbell said: ‘Gabrielle Friel is a potentially dangerous and disaffected individual, and Police Scotland welcomes the outcome of this case as the consequences of his actions could have been catastrophic.

‘I sincerely thank the health and social care professionals and the Police Scotland officers involved in what was an extremely complex and challenging investigation.

‘Their actions contributed to an early intervention and undoubtedly prevented him undertaking an act that threatened the safety of our communities.

‘This was an unprecedented case and underlines the severity of Friel’s intentions.’

Mr Campbell added: ‘We can’t do this alone and we also need the help of families, friends and the wider public.

‘I know it can be a big step, particularly when we are referring to terrorism. But if you think that a family member or a friend is being radicalised, displaying extremist views or becoming involved in terrorist activity you should contact Police Scotland.

‘Officers will work alongside other public protection partners to safeguard that individual and the public.

‘By working together effectively, we will also help to safeguard individuals who have been identified as being vulnerable to radicalisation or being drawn into extremism.’

Friel said fears he would fail a test had triggered negative thoughts of being bullied at high school in Singapore and previous attempts to take his own life, which led to further attempts before the college incident.

The court heard Friel was sentenced to 300 hours of community service after pleading guilty at a hearing in June 2018 to the stabbing, which endangered the officer’s life.

Items recovered by police were previously presented to the court during evidence from Khaldoun Kabbani, a forensic scientist from the Scottish Police Authority who focuses on ballistics and weapons, including the science of bullets and projectiles.

A report suggested the crossbow was in ‘good external condition’ and ‘in working order’, with the specifications stating it could fire arrows at 340ft per second and had a draw weight of 175lb.

When advocate depute Richard Goddard asked if that was a considerable weight, Mr Kabbani replied ‘yes’.

Mr Goddard also asked about the registration of crossbows, to which Mr Kabbani read out a document stating they ‘cannot be considered firearms’ but there is legislation on the sale of those with a draw weight over 1.4kg (3lb).

The crossbow shown to the jury on Wednesday had a draw weight of 79kg (175lb), according to another document.

Mr Goddard asked what damage this could cause, to which Mr Kabbani highlighted the steel tip arrows could pierce the ‘flesh and vital organs’, with many factors contributing to potential injury, such as wearing protection.

The advocate asked if it was ‘capable of killing someone’ and Mr Kabbani replied: ‘Correct.’

The court was also shown three packets of five arrows, with the report saying one had been damaged with the steel tip and part of the shaft missing.

Friel is alleged to have test-fired the crossbow at a drinks can at his Edinburgh home.

Mr Kabbani said while one ’empty Pepsi can appears to be pierce-damaged’ and could have been caused by an arrow, he added: ‘Other methods of damage cannot be ruled out.’

The vest was also shown to the court and worn by Mr Kabbani, who said it did not have the protective plates that would make it bullet or stab-proof.

Brian Gilfedder, Friel’s lawyer, asked if someone would be able to tell from a distance if the plates were there, to which Mr Kabbani replied: ‘No.’ 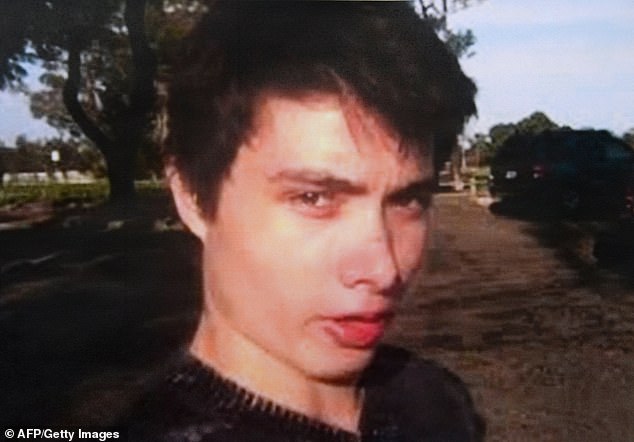 What is the ‘incel’ movement?

The incel subculture of self-professed involuntary celibates is a ‘deeply sexist and misogynistic’ development of age-old sexism that has been given a boost with the rise of internet communities, according to a University of St Andrews expert.

Tim Wilson, director of the Centre for the Study of Terrorism and Political Violence at the University of St Andrews, said the movement would not exist without social media and the internet.

‘The basic idea, I’m afraid, is the idea that sexual fulfilment is a human right and that as a man not getting it, you’re somehow being actively deprived and repressed by women.’

He added: ‘It’s deeply sexist and misogynistic, powered by an attraction to deeply self-pitying people.’ 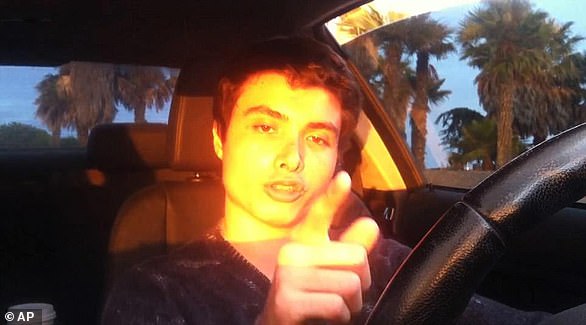 How did the subculture begin?

The incel movement gained momentum in 2014 after the Isla Vista killings by Elliot Rodger in California.

He murdered six people before turning his weapon on himself in an act of violence he described as his ‘war on women’ who were not attracted to him.

The killer posted videos of himself online setting out his ‘manifesto’, as well as declaring he would get revenge on women and sexually active men.

Mr Wilson believes Rodger was a turning point for the subculture as it made him into a ‘hero’ – with some calling him Saint Elliot.

He said: ‘We have these very dark corners of the internet where lonely, frustrated people can be attracted and reinforce each others’ prejudices and world views.

‘Out of that comes a grey borderland of socially disturbed killings.’

How widespread is the incel movement?

There have been 44 deaths related to incels since 2014, according to Mr Wilson, including 10 in a Toronto van attack by Alek Minassia in 2018.

Mr Wilson draws a distinction with episodes like these and the 1989 Montreal Massacre – when Marc Lepine entered a class at the Ecole Polytechnique and killed 14 women – as it took place when online platforms were not widespread.

Lepine said he was ‘fighting feminism’ before opening fire.

Mr Wilson believes the reason this attack did not have a similar impact as Rodger’s is that people with violently sexist views were not able to share and encourage each others’ ideas online.

The internet now has multiple forums that attract incels to discuss their own frustrations about not being sexually active, often blaming women.

How can it be tackled?

Mr Wilson said incels should be treated as a ‘quasi-political’ movement for it to be tackled by authorities.

He highlighted its sporadic nature ‘within self-pitying people with social problems’, which has created a tendency for it be dismissed.

But the professor said the community appears to be more organised – despite attacks being carried out by lone actors – and makes references to the manifesto of Rodger in the way a political uprising could be described.