The head of an international delegation monitoring the US election has concluded there was no evidence of election fraud despite President Donald Trump’s claims involving mail-in absentee ballots.

Michael Georg Link, a German lawmaker who heads an observer mission of the Organization for Security and Cooperation in Europe (OSCE) said that Tuesday’s election was ‘competitive and well managed’ despite the ‘logistical challenges’ posed by the pandemic.

He was ‘very surprised’ by Trump’s claims of postal ballot fraud, citing the US has used this voting method since the 19th century.

He told German public broadcaster rbb Thursday that ‘on the election day itself, we couldn’t see any violations’ at the US polling places they visited.

‘We looked into this. We found no violations of the rules whatsoever,’ Link told rbb.

The State Department invited the OSCE to monitor the election and they sent 100 observers to more than 30 states to watch the vote.

Trump has for weeks argued that mail voting is prone to fraud. Trump has taken legal action in a slew of states including Wisconsin, Michigan, Georgia and Pennsylvania to challenge ballot counts there.

An international election observer monitoring the US has concluded there was no evidence of election fraud despite President Donald Trump’s claims about alleged fraud involving mail-in absentee ballots. Trump has taken legal action in a slew of states to contest voting processes and ballot counts there

Trump repeated his demand to stop the counting of ballots on Thursday morning tweeting: ‘Stop the count!’ 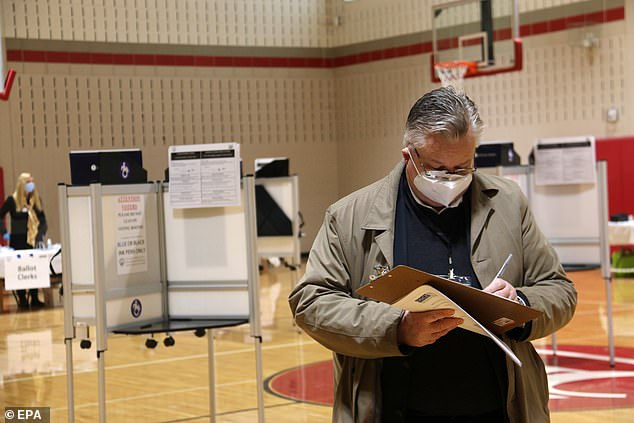 German lawmaker Michael Georg Link, the head of the observer mission of the Organization for Security and Cooperation in Europe, said: ‘We found no violations of the rules whatsoever.’ Link pictured examining a voting booth for the 2020 presidential elections, at a polling station in Washington, DC on Tuesday

On Wednesday morning, with his lead in key battlegrounds slipping, Trump claimed efforts were being made to steal his victory and prematurely declared himself the winner. 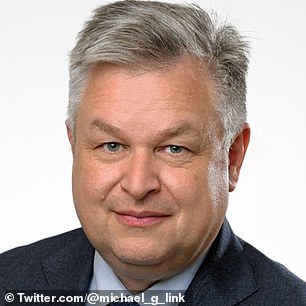 Link said he was ‘very surprised’ by Trump’s claims of postal ballot fraud, citing the US has used this voting method since the 19th century

Link said neither US election observers nor media found any evidence of fraud either, though the OSCE team on Wednesday repeated long-standing concerns about disenfranchisement of some voters and the distorting effects of campaign finance laws.

Link said there were some instances of errors being made ‘but no systemic interference or even manipulation with the postal ballots whatsoever.’

He then condemned Trump for claiming voter fraud was rampant in this election and trying to stop ballot counts.

‘That is something that does need to be described as breaking a taboo,’ Link said of Trump’s effort to stop the count.

‘He has neither the right nor the possibility to do this. Responsibility for the count lies exclusively with states.’

‘Coming after such a highly dynamic campaign, making sure that every vote is counted is a fundamental obligation of all branches of government. Baseless allegations of systematic deficiencies, notably by the incumbent president, including on election night, harm public trust in democratic institutions,’ he said Wednesday as per the Washington Post.

The Vienna-based OSCE, of which the United States is a member, conducts observer missions at major elections in all of its member countries.

The state had been called for Biden with 99 percent of votes in.

Campaign manager Bill Stepien said Republicans had not been given ‘meaningful access to numerous counting locations to observe the opening of ballots and the counting process’.

Michigan’s Attorney General Dana Nessel reacted to the statement saying no suit has yet been served, but insisted the elections had been ‘conducted transparently, with access provided for both political parties and the public’.

In Michigan a recount is automatically initiated when the election is determined by a difference of 2,000 votes or less.

According to the state’s law the request for a recount should be made within 48 hours of the vote canvass and the candidate requesting the recount must foot the bill. 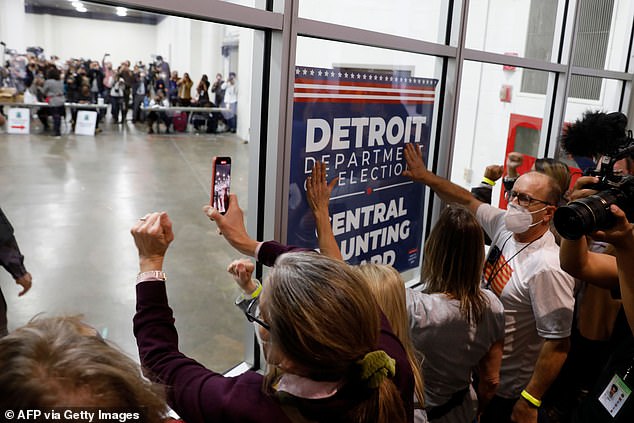 A view of Trump supporters banging on the glass of a room where absentee ballots are being counted on Wednesday in Detroit, Michigan 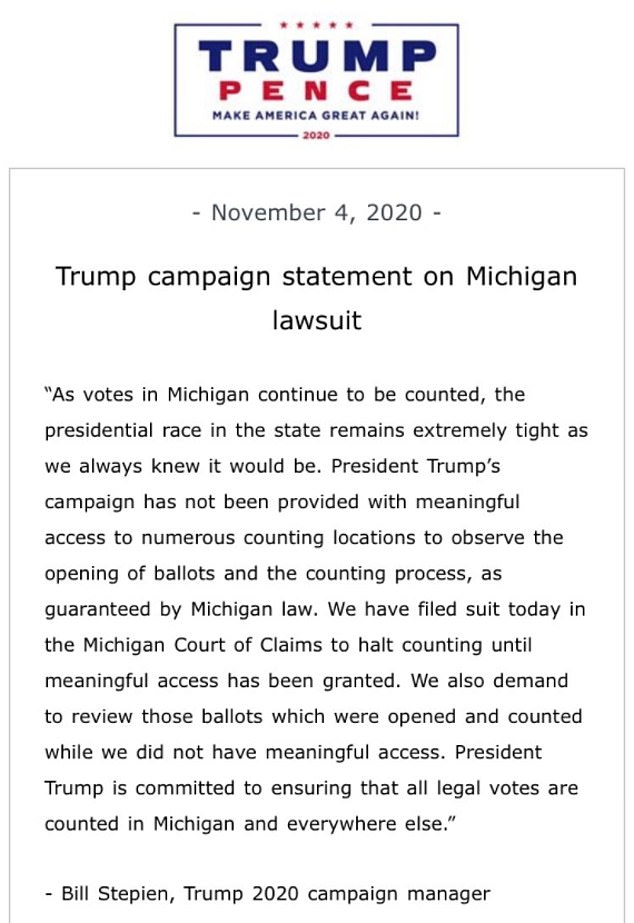 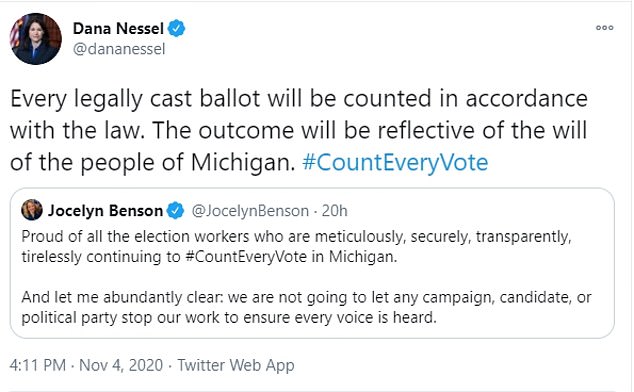 In Georgia Trump and the Georgia Republican Party have filed a lawsuit against election officials in Chatham County, asking a judge to order all late ballots be secured and accounted for.

It was filed after a Republican observer claims to have witnessed mail-in ballots which arrived after the 7pm deadline added to a pile of lawful votes to be counted.

In Georgia candidates can request a recount when the margin is less than 0.5 percent of the total votes cast for office and the request must be made within two business days following certification of the results.

The deadline for certifying results is 14 days after the election, or November 17 in this case, in Georgia.

In Wisconsin the Trump campaign said Wednesday night that it would demand a recount of ballots after the state was called for Biden with 99 percent of ballots counted. Biden is leading victory by just 0.53 percent of the vote.

Wisconsin state law allows campaigns to pay for a recount if the margin of defeat is less than 1 percent.

However, a recount can’t be called if the margin is larger than that.

The deadline for requests are by 5pm on the first business day after the state’s vote canvass and the candidate requesting the recount must pay. 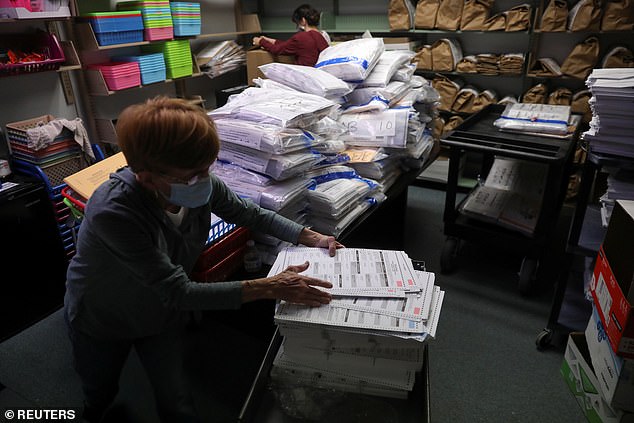 In Wisconsin the Trump campaign said Wednesday night that it would demand a recount of ballots after the state was called for Biden with 99 percent of ballots counted. Biden is leading victory by just 0.53 percent of the vote. A view of an election official organizing unused ballots in Kenosha, Wisconsin on Wednesday

In Nevada, which is too early to call and where results are expected on Thursday, the Trump campaign is expected to file a lawsuit demanding the count be called into question.

They will claim that ballots were registered under the names of some deceased residents and that others were cast by non-residents.

They say they have proof that tens of thousands were cast in the names of deceased residents.

If it’s a tied race either candidate can request a recount in Nevada. If there’s a winner, the losing candidate must file for the recount and it must be requested within three days of when final results are certified. The state is scheduled to certify their count on November 16. 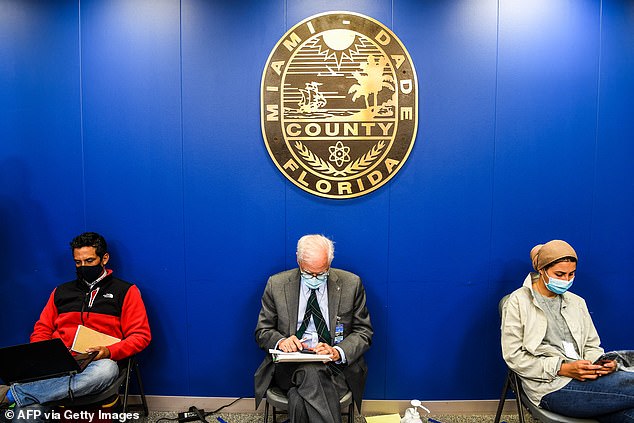 There have been no reports of fraud or any type of ballot concerns out of Pennsylvania. The state had 3.1 million mail-in ballots that take time to count and an order allows them to be received and counted up until Friday if they are postmarked by November 3.

On Wednesday the Trump campaign said they’d be taking ‘critical legal actions’ in the state that ties into a case currently before the Supreme Court which challenges state law that allows for mail-in ballots that arrive up to three days after election day.

The case of Republican Party of Pennsylvania v. Boockvar is currently before the Supreme Court and is pending petition.

Deputy Trump Campaign Manager Justin Clark said the campaign will ‘move to intervene’ in the case.

Trump also claims that Republican observers in Philadelphia were ordered to stand 25 meters away from counting staff making it impossible to watch ballots being counted.

Trump’s campaign is suing to halt vote counting until ‘meaningful transparency’ is guaranteed.

In Pennsylvania an automatic recount is triggered if the margin is 0.5 percent or less of the total votes cast.

Recount rules require county election officials to use tabulators that are different than the ones used in the election or to count paper ballots by hand.