Interest rates to double by end of 2023: ‘Ugly’ inflation puts Bank of England on track to deliver multiple half-point hikes

Interest rates are expected to more than double by the spring after latest inflation figures added to fears that a period of spiralling prices will extend well into next year.

The consumer price index (CPI) measure of inflation rose to 10.1 per cent in July, up from 9.4 per cent the month before, according to the Office for National Statistics.

That was higher than the 9.8 per cent figure forecast by economists and prompted markets to pencil in the Bank of England raising interest rates to 3.75 per cent by March 2023.

The Bank of England has already implemented rate hikes to try to cool the surge in inflation, which is at its highest level in four decades

Andrew Sentance, a former member of the Bank of England’s rate-setting committee, said it could need to raise rates to between 3 per cent and 4 per cent by the end of this year.

Sentance said: ‘The Bank has been quite slow in responding and is clearly behind the curve in trying to get on top of this surge in inflation.

‘They do have tools at their disposal, particularly interest rates.’

Two-year government bond yields, which are sensitive to rate increases, rose to their highest levels since 2008 on the latest inflation data.

The Bank has already implemented rate hikes to try to cool the surge in inflation, which is at its highest level in four decades.

An increase of half a percentage point this month was the biggest since 1995 and took the benchmark rate to 1.75 per cent.

Even before yesterday’s inflation figures, experts were already pencilling in another half-point rise in September. Markets are now even pencilling a slim chance of a three-quarter point increase next month.

Britain is not alone in experiencing an inflation surge, as the war in Ukraine drives up the costs of commodities such oil and wheat, adding to global supply chain woes that were already putting pressure on prices.

But it is the first of the G7 group of advanced economies to see the price index reach double figures amid the crisis.

In America, the inflation spiral could already be starting to abate after it dropped to 8.5 per cent in July from a four-decade high of 9.1 per cent in June.

Sanjay Raja, senior economist at Deutsche Bank, said: ‘Inflation data was just about as bad as the MPC [monetary policy committee] could have hoped for.’ 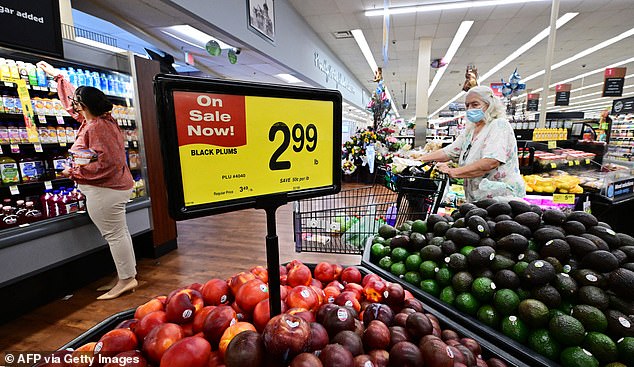 In America, the inflation spiral could already be starting to abate after it dropped to 8.5 per cent in July from a four-decade high of 9.1 per cent in June.

He pointed to rents and other housing-related prices coming in higher than expected while food and energy cost spikes had a knock-on effect for hospitality and leisure.

And he added that there was also ‘probably more to go’ for food price rises, which were the biggest driver of July’s inflation increase.

Deutsche is now forecasting that inflation will remain in double-digits at least until late in the second quarter of 2023.

The Bank of England expects inflation to hit 13 per cent in 2022 before falling back.

Raja said the ‘ugly’ data should put the Bank’s rate-setters on track to deliver multiple half percentage point hikes this year.

The pound tends to be buoyed up by the prospect of interest rate increases but slipped back on the latest inflation figures at nearly $1.2065 against the dollar.

Analysts said the outlook for the currency was bleak as the latest developments increased the risks of an economic stagnation combined with high inflation – or ‘stagflation’.

The Bank of England has predicted a prolonged recession starting later this year and continuing through all of 2023.

‘You wouldn’t necessarily want to be holding a risky currency like sterling into a recession.’

While the Bank of England predicts that inflation will top 13 per cent in October, Chris Hare, senior economist at HSBC, said that subsequent probable increases in the energy price cap would see it climb even further, to around 14 per cent, in January.