EXPRESS INFORMER > Business & Finances > Interest rates are rising: Is it better to save or invest?

One of the few upsides of rising inflation is that returns on savings accounts are going up.

And as they rise, Britons are moving more of their cash into fixed-rate savings deals, with interest rates across the market rising on a daily basis.

A net £2.8billion flowed into fixed-term cash deposits in July 2022, according to the latest figures from the Bank of England – the strongest flow seen since November 2010.

Among the best fixed rate savings accounts, a one-year bond pays 3.32 per cent and while that comes nowhere near matching high inflation, it is starting to knock on the door on the annual payouts of income funds and investment trusts, with the FTSE 100 yielding 4 per cent.

Savers lock in: A net £2.8billion flowed into fixed-term cash deposits in July 2022 – the highest level seen since November 2010

Savers going into cash will not get to benefit from potential gains from rising share prices, but their almost 3.32 per cent interest rate return is an almost risk-free option if held in a FSCS protected savings account, whereas stock market investing involves the potential for investments to fall as well as rise in value.

Savers are no doubt being enticed by the better rates on offer.

The rates at the top of our independent best buy savings rates tables are looking more and more attractive by the week.

Although these returns might seem low when compared to the potential returns from the stock market, current stock market volatility may be leading some to reconsider their stance.

Whilst savings rates are heading upwards, some of Britain’s most-loved funds and investment trusts have endured a torrid year.

The country’s biggest investment trust Scottish Mortgage, which has assets valued at more than £11.5billion, is down by more than 40 per cent over the past year alone.

Fundsmith Equity, a £28.9billion fund run by star investment manager Terry Smith, has fallen roughly 10 per cent in that time.

Neither of these are income investments, funds or trusts that target dividend returns, nor are they fit into a lower risk category, but they are major global investing vehicles for UK mainstream investors that are very widely held.

Alistair McQueen, head of savings and retirement at Aviva, said: ‘Cash is back. Rising interest rates, increased investment market volatility, and record low levels of consumer confidence are driving savers towards the safe-haven of cash saving.

‘The average new fixed-term interest rate has risen to 1.72 per cent. This is a six-fold increase from the average 0.29 per cent reported in July 2021.

‘And many providers are offering rates above this average. The value of shopping around has never been stronger.’ 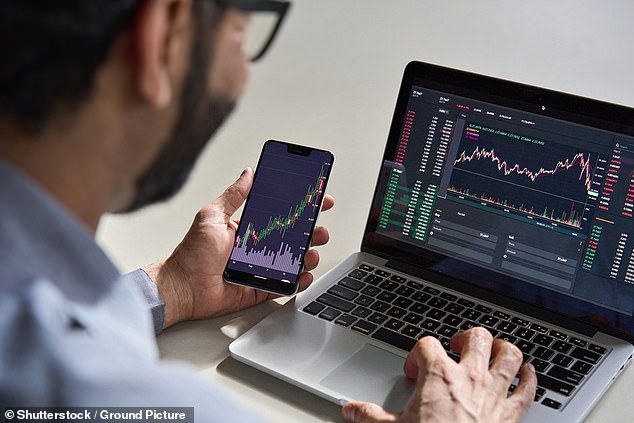 Volatile: Many investors have seen the value of their investments fall over the past 12 months

Saving versus investing: the main arguments

The main disincentive when it comes to savings is that the returns on offer still pale in comparison to the rising cost of living.

CPI inflation reached 10.1 per cent in August, and the Bank of England is predicting it will peak at around 13 per cent this autumn.

If inflation continues at its current rate, then the value of savings – even when held in the best-paying accounts – will be plummeting in real terms. 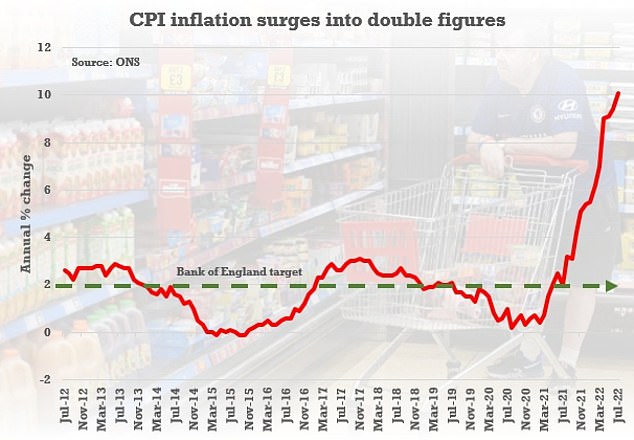 Rick Eling, investment expert at wealth management firm, Quilter, says: ‘Savings rates in isolation don’t mean anything. To get the full picture they must be tested against the current rate of inflation.

‘It is very unusual for there to be savings rates that offer a real-term gain for no risk. This only happens when a bank rate, after any tax, exceeds inflation. This hasn’t happened for many years.

‘Interest rates have gone up fractionally, but inflation has gone up by much more. It is therefore one of the worst times ever to be in cash.

‘Superficially the headline savings rates have increased, but the gulf between the Consumer Price Index and the Bank of England base rate means that people’s cash is decaying at an alarming rate. In other words the ‘the cost of cash’ is as high as it has been for decades.’

However, when it comes to investing the major disincentive is the volatility of the stock market coupled with a very uncertain economic outlook.

The Bank of England is now forecasting a long UK recession, beginning at the end of this year, which is expected to last throughout 2023. This could well put many potential investors off.

What are typical investment returns at the moment?

The Barclays Equity Gilt Study shows that since 1899 British stocks have returned around 5 per cent a year in real terms, as above inflation returns are referred to.

However, ultimately there are lots of variables that will impact what return someone could expect, including their appetite for risk.

Eling adds: ‘It is not helpful to think of returns in the same way as savings rates in bank accounts, as it breeds an expectation that each year you will see your portfolio grow by 5 per cent.

In some years, you may make more than 20 per cent while others you make a loss

‘This may not be the case and in some years, you may make more than 20 per cent while others you make a loss.

‘Ultimately, this historically has averaged out to a gain but illustrates exactly why investing for the long term is so important.’

When looking at the FTSE 100, the majority of the returns over the last 25 years have been from reinvested dividends rather than capital growth, according to Quilter.

‘If you purely looked at capital growth you might conclude that there would be no point investing at all,’ says Eling.

‘However, when looking at the full picture you see that the reinvested dividends are much more important than the index level.’ 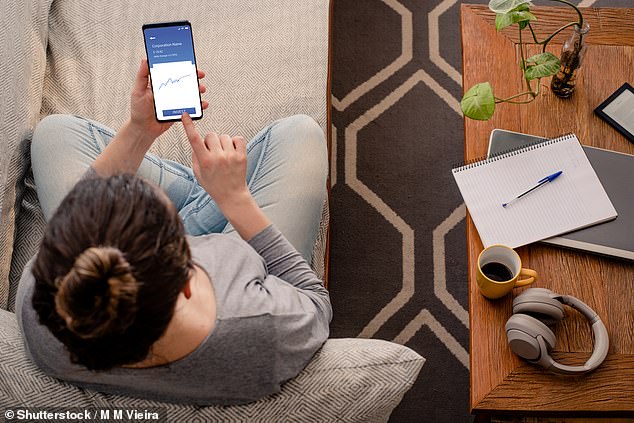 When to invest? Wealth managers advise would-be investors to take a long-term view without worrying too much about trying to time the market

People concerned about the short-term health of the economy should bear in mind that the future outlook is already mirrored in the stock market. In other words, it has to some extent already been priced in.

Laith Khalaf, head of investment advice at AJ Bell said: ‘The UK economy is heading for recession, but investors can take some consolation from the fact that the Bank of England’s doom-laden forecast barely caused a ripple on the stock market.

‘That’s because the market is already anticipating poor economic performance, and so prices have already adjusted.

‘That’s not to say stocks won’t suffer any setbacks during the downturn, if it looks like getting worse, or if the shock to corporate earnings is greater than currently anticipated.

‘But a lot of bad news is already reflected in valuations, and when sentiment turns more positive, markets can accelerate sharply, leaving the uninvested behind.’

When could saving be the right option?

It is certainly a positive that savings rates are rising and that savers can now begin to earn meaningful returns – despite inflation eroding the value of their savings in real terms.

Whether it makes sense or not to save will depend on a person’s situation, their timeframes and their tolerance to risk.

Before investing any money, everyone should they ensure they have a safety buffer in savings to cater for any unforeseen emergencies in the near future.

Some say a rainy day pot should cover between three to six months worth of basic living expenses.

Others suggest you keep the equivalent of at least three months of your take-home salary.

Most financial planners also advise that a minimum five year timeframe needs to be used when investing.

Anyone who may need to use the cash in less than five years – perhaps towards a property purchase, or towards school fees or their retirement, for example – may be wise to stick to savings.

‘If a client’s time horizon is less than 12 months, then investing in cash is very sensible despite guaranteeing a return below inflation.

‘If you have a long time horizon and can tolerate volatility in your investments you should avoid cash.

‘It is important to remember that consistently timing investment in and out of the stock market is impossible.

‘The best option is to build a diversified portfolio of investments (which may include cash) to match your individual risk profile and stay invested through the market cycle.’