The Financial Conduct Authority (FCA) said it is cracking down on unscrupulous firms to end the practice where existing customers are offered quotes that are higher than new ones.

Regulators found last year that millions of customers were being unfairly charged higher prices, including an extra £1.2 billion in 2018 alone.

Insurers will be required to offer renewing customers a price that is no higher than they would pay as a new customer.

But those who regularly shop around for a cheaper deal, who are often younger customers, could end up paying more, with discounts for everyone becoming smaller and more scarce.

The FCA admitted the changes are likely to bring an end to unsustainably low-priced deals to some customers.

But officials said that overall, consumers will save £4.2 billion over 10 years.

‘This is a watershed moment for insurance, and we’re very happy to see the FCA taking action to protect customers’, Louise O’Shea, chief executive of Confused.com, said.

The price of loyalty penalty

In 2020, the FCA calculated the differences in prices paid by existing and new customers who have been with their provider for more than five years. Annual policy prices for a typical risk, on average:

Last year, regulators found that millions of customers were being unfairly charged higher prices, including an extra £1.2billion in 2018 alone.

The new rules will come into effect from January 1 next year and their impact will be reviewed in 2024.

Many, but not all, insurance companies hike prices for existing customers each year at renewal, in a practice known as price walking.

The FCA has pointed to an example in which a new customer for buildings insurance typically pays £130 for a year’s cover. But for the same policy, having stayed with the same insurer for, say, five years, that annual premium increases to £238.

The FCA said: ‘This means that consumers have to shop around and switch every year to avoid paying higher prices for being loyal.

‘It also distorts the way the market works for everyone. Many firms offer below-cost prices to attract new customers.

‘They also use sophisticated processes to target the best deals at customers who they think will not switch in the future and will therefore pay more.’

The watchdog added that the new rules will also make it easier for customers to cancel automatic renewal of their policy and require insurance providers to do more to consider how they offer fair value to their customers. 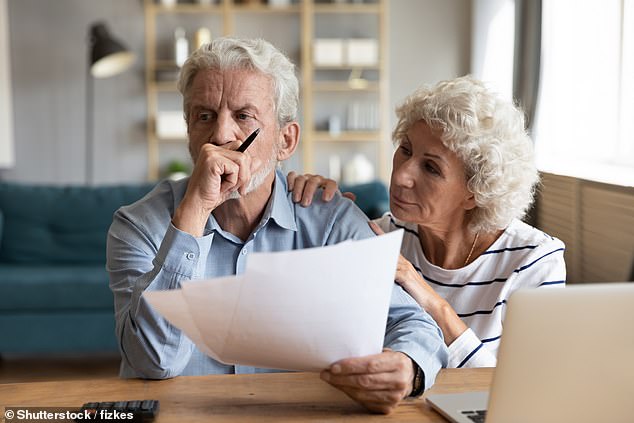 Gut wrenching: Many, but not all, insurance companies hike prices for existing customers each year at renewal

Insurers will also have to send data to the FCA so the regulator can monitor the market more effectively.

Sheldon Mills, executive director, consumers and competition at the FCA, said: ‘These measures will put an end to the very high prices paid by many loyal customers.

‘Consumers can still benefit from shopping around or negotiating with their current provider – but won’t be charged more at renewal just for being an existing customer.

How will price comparison websites be affected?

‘The change caused by the FCA’s decision could be profound.

‘Price comparison websites could be heavily impacted as the amount consumers will be saving by switching is going to fall. So people might switch less often.’

‘We are making the insurance market work better for millions of people. We will be watching closely to see how the market develops in the future and to ensure firms continue to deliver fairer value to consumers.’

Representing insurance providers, Charlotte Clark, director of regulation at the Association of British Insurers, said: ‘Insurers support these reforms and will continue working closely with the FCA to ensure they are delivered effectively.

‘While the FCA recognises their interventions could lead to price increases for consumers who regularly shop around, these remedies should ensure that all customers get fair outcomes from competitive insurance markets.’

She added: ‘It is vital that the new rules are applied across the whole insurance market, including price comparison websites and insurance brokers, with a uniform level of supervision and monitoring by the FCA, to ensure good customer outcomes.

‘As the FCA has said previously, insurers do not make excessive profits and, as they now point out, it is likely that firms will no longer be able to offer unsustainably low-priced deals to some customers.’

Rodney Bonnard, UK head of insurance at EY, said: ‘In practice, we expect this to be beneficial for longer term customers but customers who switch providers regularly may pay more once the reform is implemented.

‘In the immediate aftermath of the transition, we could well see some product consolidation, however over time, innovation will be crucial to competitive advantage.’

Gareth Shaw, head of money at Which?, said: ‘For far too long, insurance companies have employed sharp pricing tactics to lure in customers before hitting them with eye-watering price hikes and exorbitant premiums, so it is right that measures will finally be introduced to help put an end to these unfair practices.’

Citizens Advice previously submitted a ‘super complaint’ to the Competition and Markets Authority about the loyalty penalty paid across the mobile, broadband, home insurance, mortgages and savings markets.

Matthew Upton, director of policy at Citizens Advice, said: ‘For us, and those loyal customers, this fix cannot come soon enough.’

Meanwhile, Owen Morris, managing director of Personal Lines at Aviva UK General Insurance said: ‘We welcome the FCA’s intent to bring greater clarity and consistency to consumers across general insurance pricing and we’re committed to working with the FCA and the industry to implement these new rules.’

He added: ‘Aviva has already taken action to tackle some of these issues through limiting price differences between new and renewing customers and testing new products, and these changes will create further consistency in removing price differences.’

Retail general insurance products represent an important market in Britain, generating £24billion in revenues in 2017, with more than 45million new home and motor insurance policies underwritten in 2018, the FCA said.

Higher insurance costs on the way?

The FCA admitted that the changes they are making to ‘loyalty penalties’ are likely to bring an end to unsustainably low-priced deals to some customers.

As This is Money highlighted last year, banning this practice will mean that insurers can no longer reserve the best deals for new customers while at the same time charging more to existing policyholders who don’t switch away when they renew.

While the rule change is good news for the majority of policyholders who choose to stay with their existing provider, it is likely to penalise those who have bothered to shop around.

‘In the current model, insurers offer heavily discounted new business prices to acquire new customers, but don’t make profit until year two or three of the policy. So naturally, prices will need to even out to support the sustainability of the industry.’