Meta is rolling out Amber Alerts to Instagram to help find missing children in the UK.

Staring today, users of the Instagram app in 25 countries, including the UK and Ireland, will get alerts when a child is missing in their local area.

The alerts include important details about the child such as photos, description, location of an abduction and any other available information.

They also include a link to call a phone number to report a sighting of the missing child to authorities.

Instagram users can’t opt out of seeing the alerts, as taking note of them can help save a child’s life.

The alerts include important details about the missing child such as a photo, description, location of the abduction and any other available information

WHAT ARE AMBER ALERTS?

Amber Alerts refers to an emergency response system that spread information about a missing child.

The Amber Alert warning system was founded in 1996 following the brutal kidnapping and murder of nine-year-old Amber Hagerman in Arlington, Texas. It was named in the youngster’s honor.

Amber Alerts are distributed through radio stations, TV, the internet and text messages.

Authorities have teamed up with Google, Microsoft Bing and Meta (formerly known as Facebook) to bring Amber Alerts to their platforms.

Seven years later, Amber Alerts for Instagram has been developed in partnership with organisations including the National Crime Agency.

Meta says the feature will start rolling out on Wednesday, and will be fully available in 25 countries in the next couple of weeks – including the UK, Ireland, Australia, New Zealand and the US.

‘We know that the chances of finding a missing child increase when more people are on the lookout, especially in the first few hours,’ said Emily Vacher, director of trust and safety at Meta.

‘With this update, if an Amber Alert is activated by law enforcement and you are in the designated search area, the alert will now appear in your Instagram feed.

‘Amber Alerts are an important way we can support our communities in keeping children safe, and we look forward to continuing this work.’

The alerts will appear on a user’s homepage among posts from other users, with the heading ‘Missing child’.

Below this will be photos of the child and details including their name and where and when they were last seen, as well as a number to report a sighting of the child.

Since the effectiveness of the alert is highly dependent on the number of people it reaches, people will not be able to opt out, Meta said.

However, they will be able to press an ‘x’ on the corner of the alert to stop seeing it. 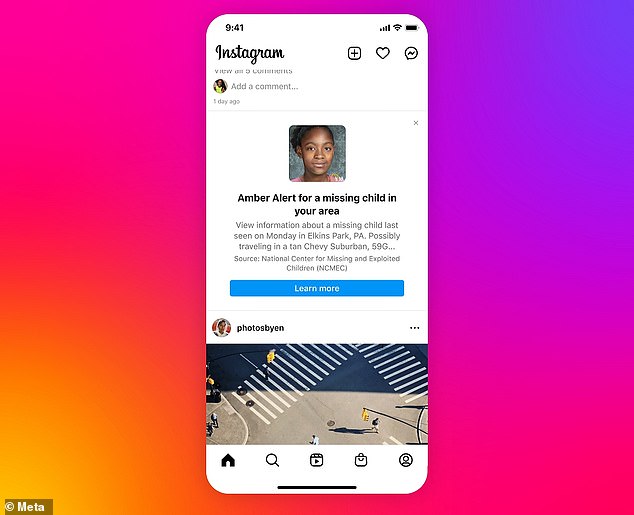 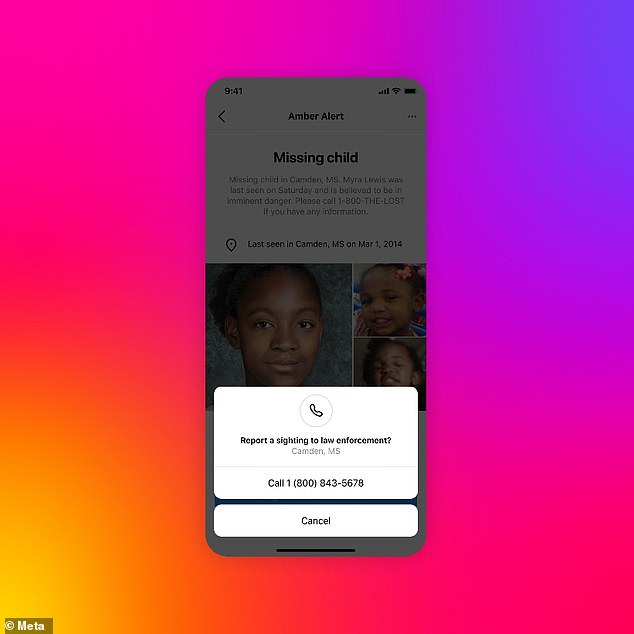 HOW TO SEE AMBER ALERTS

If an alert is activated by law enforcement and users are in the designated search area, the alert will appear in their Instagram feed.

Users can’t opt out of seeing the alerts; taking note of them can help save a child’s life.

The Amber Alert warning system was founded in 1996 following the brutal kidnapping and murder of nine-year-old Amber Hagerman in Arlington, Texas. It was named in the youngster’s honor.

Since then, more than 700 children in the US have been found as a direct result of the alerts. They are now issued over TV and radio, on highway signs, as text messages and over the internet.

Facebook brought Amber Alerts to timelines of Facebook users in the US in 2015, and to UK users in 2017.

In seven years since its initial launch, the alerts have assisted in hundreds of successful child endangerment cases globally, Meta said.

In 2014, an 11-year-old girl was safely recovered after a motel owner recognized her from an Amber Alert that a friend had shared on Facebook. 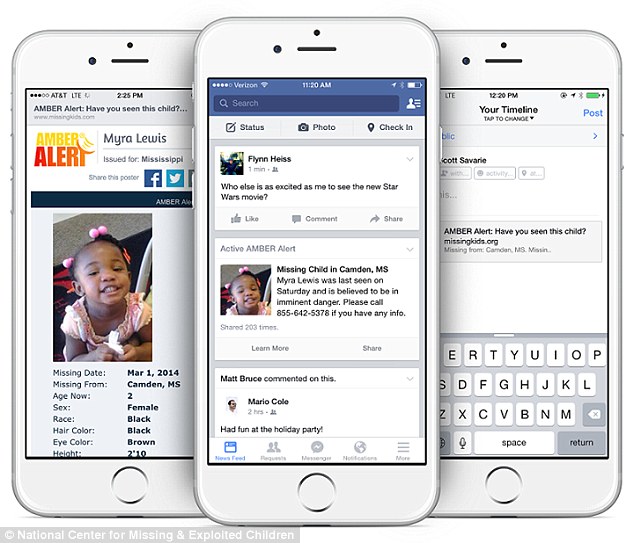 ‘Amber alerts are a crucial tool in helping to get a message out quickly about a missing child and often result in vital information from the public that helps law enforcement to locate them,’ said Louise Newell at the National Crime Agency’s UK Missing Persons Unit.

‘Having a really visual social platform like Instagram on board with issuing such alerts is great news, bringing missing children cases to a larger, more diverse audience and therefore increasing opportunities to find a missing child.

‘If you have any information relating to a missing child alert, however small, you should immediately contact the police using details in the alert message.’