Instagram influencers have been slammed for trying to score free food and alcohol from businesses struggling through the coronavirus pandemic.

Cook messaged P & V on Instagram to ask them if they did ‘collabs’.

When the company asked if he had anything specific in mind, Cook replied: ‘I was wondering if you’d consider sending a complimentary case once a month in exchange for some social media promotion?’

Cook went on to boast about how the wine company could benefit from his reach on social media, revealing he had 78,000 combined followers on Twitter and Facebook. 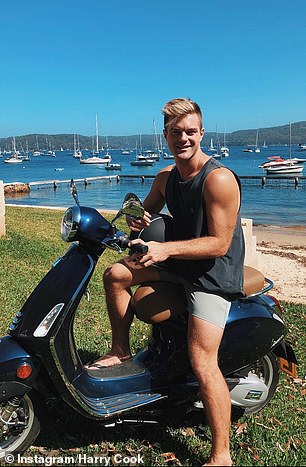 But he was quickly shut down by the wine merchants, who blasted his offer as ‘totally uncool’.

‘We’re in here working our asses off to support a near devastated hospitality industry with ramifications on primary producers and winemakers who are at the brink in a destroyed industry and you want a free dozen wines a month for social posts? Nah,’ the company responded.

Mike Bennie, who co-owns the business which specialises in family-owned products, told Daily Mail Australia that Cook’s approach was ‘insensitive’ and in poor timing.

‘Asking people who are really deeply affected by the pause on the hospitality industry is a pretty poor judgement of how to approach supporting those in need in this very difficult time. 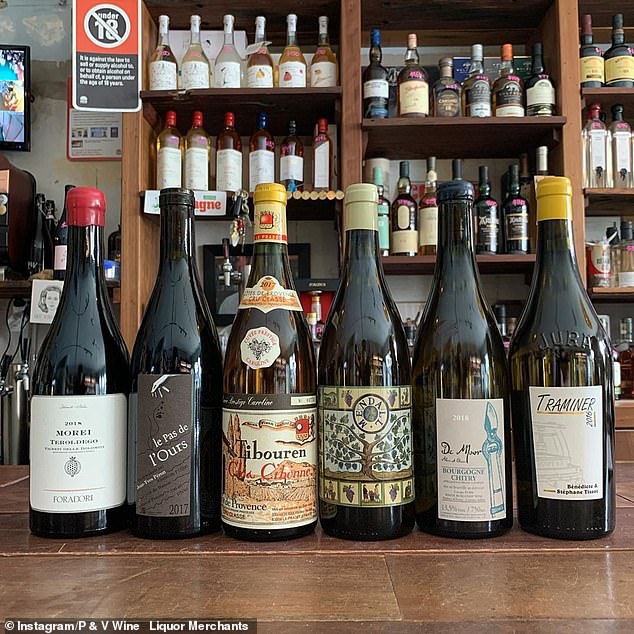 ‘We’re not even a business that requires social media help from ‘influencers,’ we’re the last business who would need that.

‘It continues the discussion around what’s important right now about society and doing good deeds, and the right and wrong way to go about supporting those in need.’

Cook also copped fierce backlash from other Instagram users for his behaviour during the pandemic.

‘Seriously! At this time! When all small businesses are going under…. shame,’ someone wrote.

‘Culture of wannabe influencers. Put them in stocks and pelt them with rotten produce,’ said another.

Other companies on the receiving end of influencer collaboration offers have shared the cringeworthy pitches they have been sent during the COVID-19 outbreak.

The blogger, whose identity was hidden from the screenshots, wrote: ‘Just wondering if u be interested for me to introduce your takeaway meal for people to enjoy as that way they can enjoy your food at the moment.’

The restaurant rejected the offer, responding: ‘Sydney food places are closing down and you still want a freebie?’ 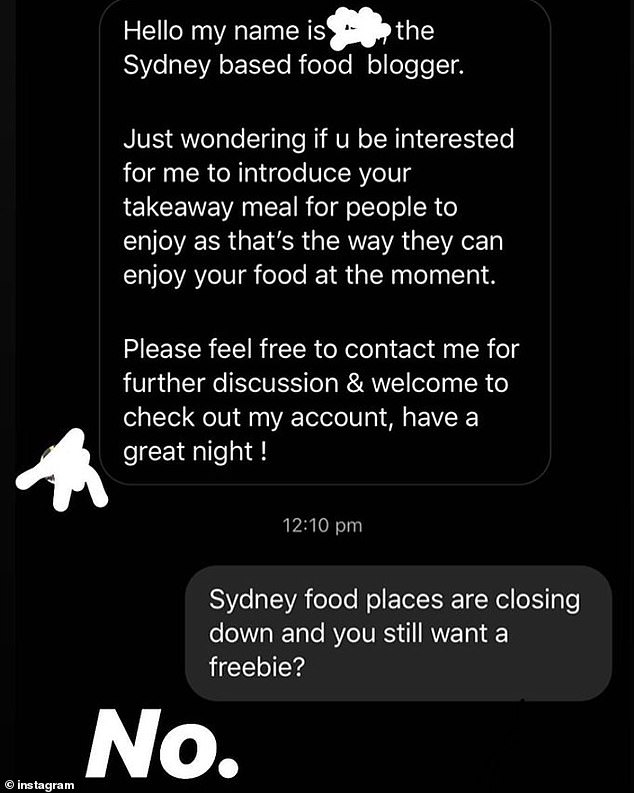 The blogger was blasted for trying to capitalise on the demise of restaurants amid mass closures.

‘Surely this is a time when the food blogging ‘community’ could attempt to redeem themselves by promoting any food outlets offering takeaway??,’ one person wrote.

‘The sense of entitlement and audacity of some of these ‘influencers’ is staggering,’ wrote another.

‘That is disgusting. At at time when people losing their jobs, they should do the right thing and pay for themselves or if they aren’t in a position to do so, send a message of support,’ another comment read.

Travel blog Places All Day was also outed after asking a well-known Sydney hotel for a ‘Covid Collab’.

The blog owner proposed the collaboration so the popular hotel could stay ‘relevant’.

‘If your budget permits, we would love to work with you collaboratively,’ the pitch read. ‘If you would like to work with us … I can send you our updated rates.’ 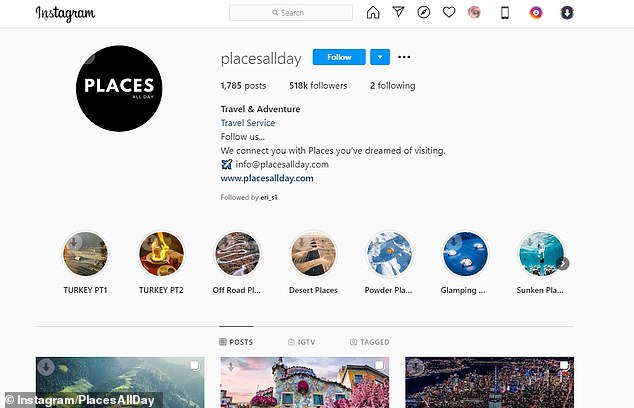