Victoria Beckham has transformed her figure in recent months through gruelling workouts with a former Team GB star.

Despite being known under her Posh Spice mantra, the star, 48, now seems more akin to Sporty Spice after embracing an athlete’s regime, according to London-based personal trainer Bobby Rich.

Bobby has also revealed that despite her husband David’s claims she’s eaten the same meal for 25 years, Victoria’s active lifestyle means she can still indulge in healthy fats and even the odd alcoholic tipple.

Speaking to The Sun, Bobby offered insight into Victoria’s exercise programme, revealing she has placed focus on keeping her joints healthy as she approaches 50.

He said she joins him in the gym five days a week, and even on holiday maintains her routine through online sessions.

‘My methodology and application towards Victoria’s training is based on my own conditioning programming I used when competing,’ Bobby said. 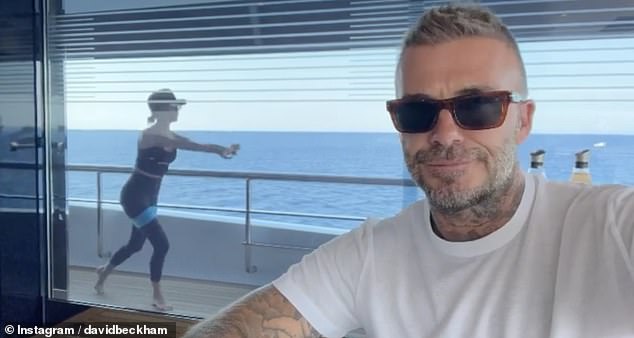 Even when she’s away! The star now seems more akin to Sporty Spice after embracing an athlete’s regime, even exercising on her summer holiday with husband David (pictured)

‘I treat the year as a season and work through different training blocks, identifying peaks and recovery phases to get the most out of the incredible efforts Victoria puts into each session, mentally and physically.

‘The biggest difference in Victoria’s training is the introduction of strength training and functional movements, such as overhead squats, cleans and snatches.’

Snatches, which form a key part of Victoria’s workours, are a weightlifting movement that involves a being lifted overhead from floor to ceiling, and primarily uses the core muscles, shoulders and glutes. 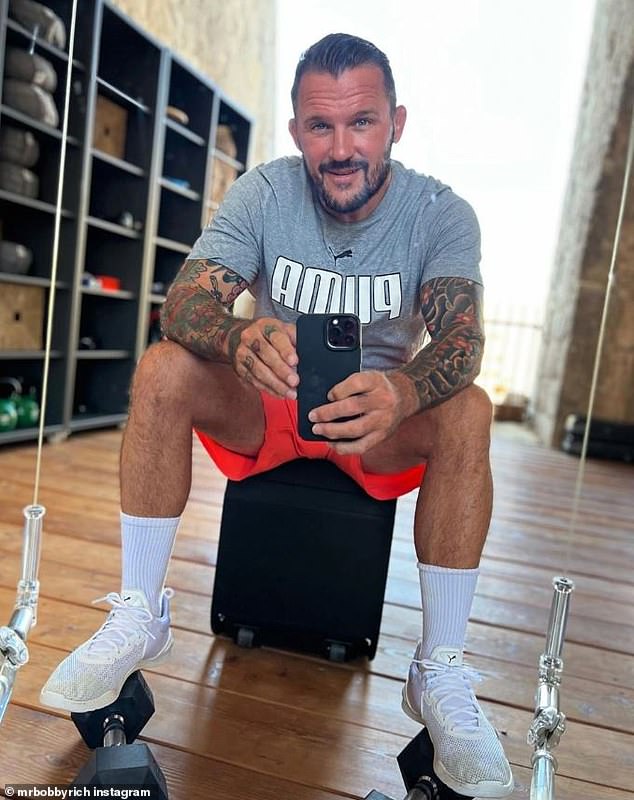 Victoria is expected to burn up to 600 calories during her workouts, and she keeps on burning them once her session is finished.

The star is two years away from turning 50, and has begun to prioritise her joints and mobility with her workouts, with Bobby going onto reveal she focuses on ‘the smaller movements and accessory work.’

Victoria, who has been staying on a luxury yacht with husband David and their children, has continued working out daily during her summer break, with the footballer recently sharing a hilarious clip of the star lunging across the deck.

The singer is also famously known for disciplined diet, with David recently claiming she never deviates from a dinner of grilled fish and steamed vegetables. 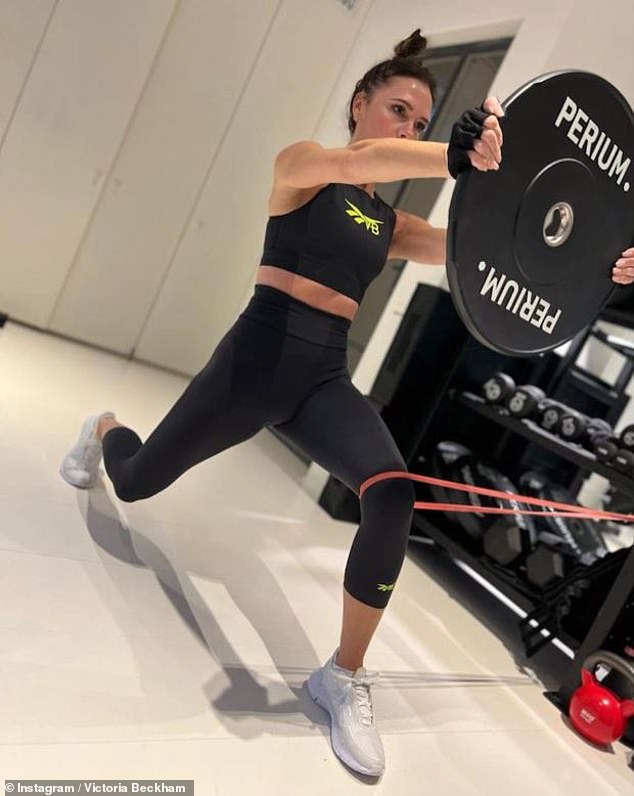 Important: The star is two years away from turning 50, and has begun to prioritise her joints and mobility with her workouts 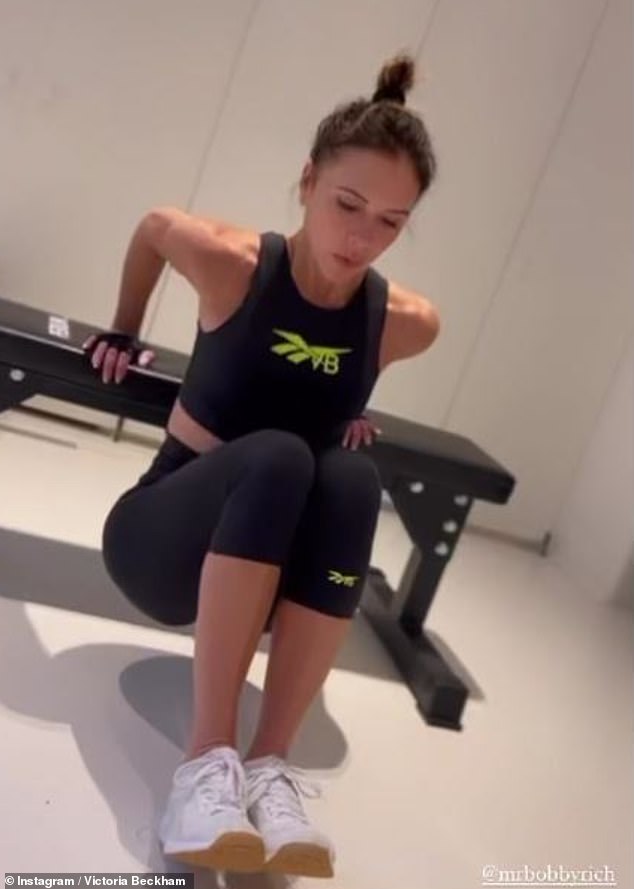 Revelation: Bobby explained: ‘The biggest difference in Victoria’s training is the introduction of strength training and functional movements, such as overhead squats, cleans and snatches’ 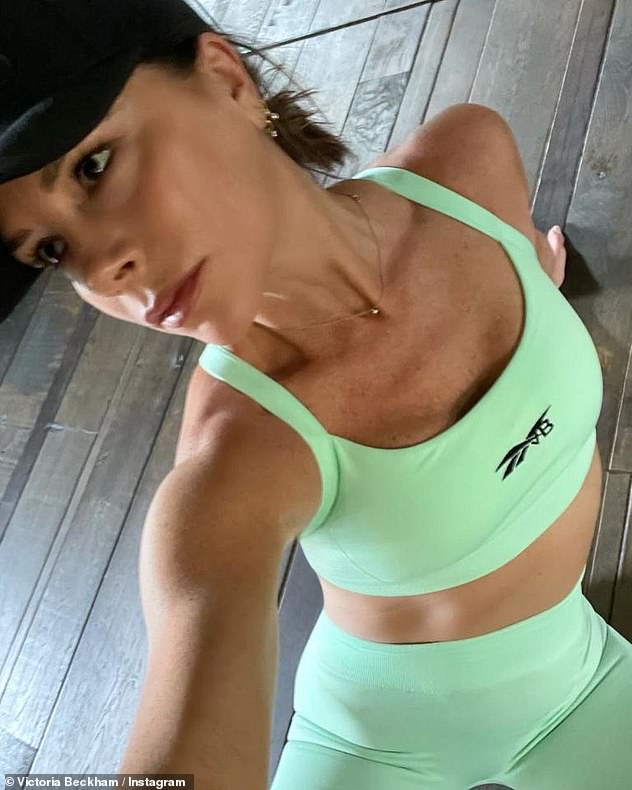 However, Victoria’s athletic-level training regime now means she can indulge in healthy fats such as nuts, avocado and oily fish.

The star previously hit back at David’s claims about her diet, saying: ‘Talk about making me sound boring! No. What he meant is that he’s never met anyone who’s more disciplined with the way that they eat.’

‘I eat lots of healthy fat: fish, avocado, nuts, that sort of thing. I do drink alcohol, unless I have a reason not to. I’ll detox from anything for three to six months where I won’t drink.’

‘I’m quite extreme in anything I do, whether it’s eating or working out or drinking or not drinking.’ 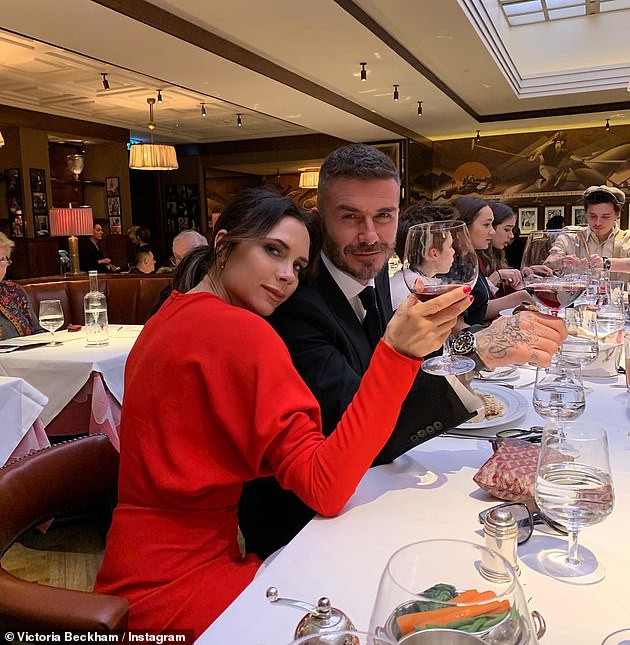 Drink up! Despite her strict eating habits, Victoria still allows herself the odd vice, whether it be tequila, or a glass of fine wine

It’s revealed she doesn’t let a day go past without drinking apple cider vinegar first thing in the morning, and adding Skinaide collagen peptide powder in her coffee.

Despite her strict eating habits, Victoria still allows herself the odd vice, whether it be tequila, or a glass of fine wine.

Victoria’s daily routine revelations come after she came under fire from a famous Spanish chef for causing him grief at a celebrity wedding with her ‘complicated’ dinner demands.

Dani recalled how Victoria had coconut water by her ‘all of the time’ as well as bowls of mints, as he branded the habits ‘odd’ in a new interview. 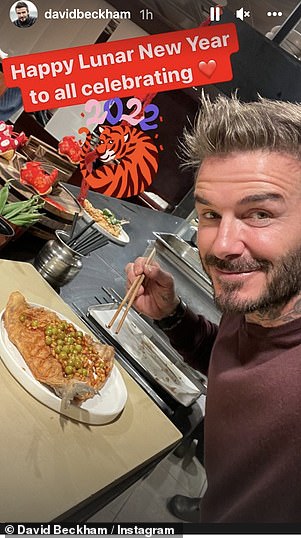 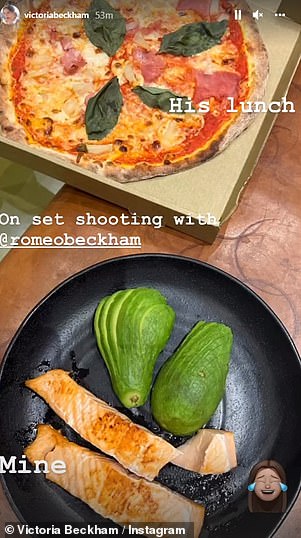 Yummy! Foodie David confessed on the River Che Table 4 podcast earlier this year: ‘I get quite emotional about food and wine, when I’m eating something great I want everyone to try it’

Disputing Dani’s version of events, a source close to Victoria said: ‘This makes a great story but isn’t fair or accurate – the most Victoria would have done when asked about dietary requirements is ask for some plain fish and vegetables.’

Victoria’s ‘odd’ eating habits have been the subject of intense scrutiny for years.

During Euro 2004 she reportedly stuck to a diet of strawberries washed down with mineral water.

The mother-of-four has previously revealed she won’t eat food cooked in oil, butter or sauces and doesn’t eat red meat or dairy.

Last year she said her comfort food was whole grain toast with salt on it and admitted: ‘To most restaurants I’m probably their worst nightmare.’ 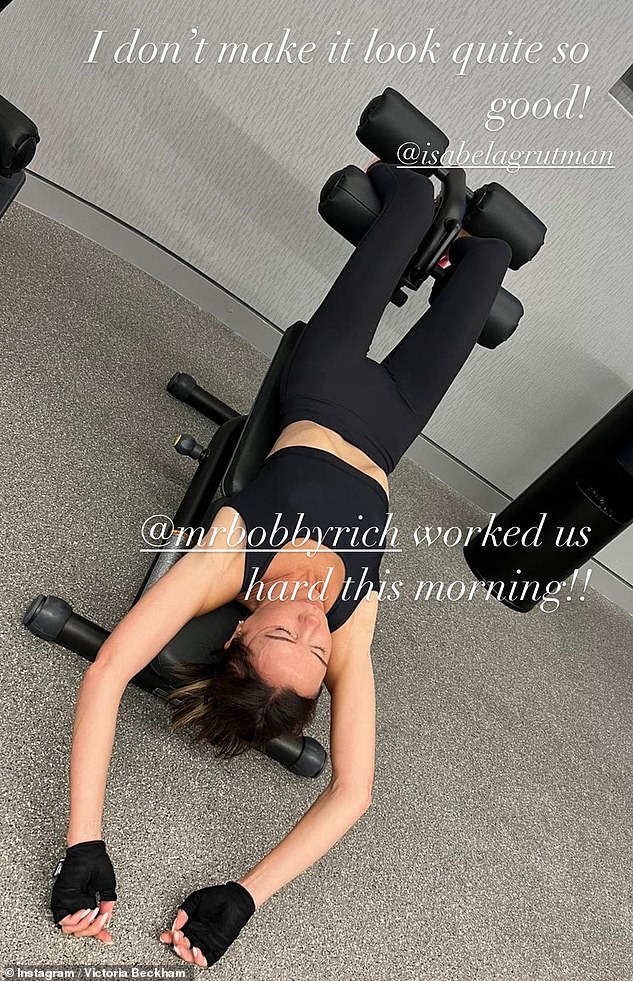 Hard work! Victoria regularly shares snaps and videos from her workouts on Instagram