An ‘ex-incel’ has shone a light on the sinister world of involuntary celibates and their cryptic online language.

A 23-year-old from Chicago has lifted the lid on incel ideology which, in its simplest form, refers to people unable to find a romantic or sexual partner despite wanting one.

Yet recently, incels have become more known as violent extremists, with the term made famous following a number of mass murders including the 2014 Isla Vista killings committed by Elliot Rodger, and the UK’s Plymouth gun attack in 2021.

The Plymouth gunman, Jake Davison, 23, killed five people, including his mother and a toddler before turning the gun on himself.

A fatalistic idea that an incel cannot improve their own situation and should accept their fate of unattractiveness, lack of wealth or social status

A person who lives a conventional life, unaware of men’s ‘oppression’ by women

Translates to Lie Down And Rot, indicating there is no hope in life

An inquest begun just this Tuesday for the victims of his attack, with concerns raised about why the UK man was allowed to legally own a firearm under a sporting licence.

Elliot Rodger also killed six people and injured fourteen near the University of California campus before shooting himself.

He committed these crimes after believing he was ‘denied’ sex and love.

Despite this, Riley Drapp of Chicago, stressed that not all incels have violent tendencies and are often drawn to toxic online communities in their loneliest moments.

The 23-year-old urged that young men struggling with their sexual identities need more support to steer them away from extremism.

He said: ‘I think the incels featured on the news are the one per cent – those are a completely different breed. Most incels are the ones with sexual struggle.

‘I was in a properly dark period in my life. I dropped out of college I didn’t have a job and I didn’t do well financially.

‘I was right about to turn 21 and then the pandemic happened, so I couldn’t go out to a bar or anything so that was kind of sad.

‘I didn’t really have many friends. I just felt like my life wasn’t really going anywhere.

‘All I would do all day is stay eternally online on social media, maybe playing a game or two here or there but I realised it really didn’t help.’

Riley found a dark part of the internet which he claimed was largely driven by 18 to 25-year-olds with a ‘warped perception’ on life.

For over a year, he looked at life through the lens of incel terminologies and theories.

The community hosts a number of ‘pill’ ideologies ranging in colours such as black, blue, red and purple.

Riley related most to the beliefs of the black pill which he described as having accepted his fate of feeling unattractive and sad.

Incels also uses a number of terms to describe different types of people.

Some incels have taken the idea of this to another level by hitting themselves in the face with hammers in an attempt to become more attractive.

At one point, Riley was hooked on much of the vocabulary used by incels.

He said: ‘One time my parents had a neighbourhood party and there was this one kid and he looked around 6ft 2 and he had his girlfriend there. He had a little bit of muscle and I was like “oh this guy looks like a gigachad”. 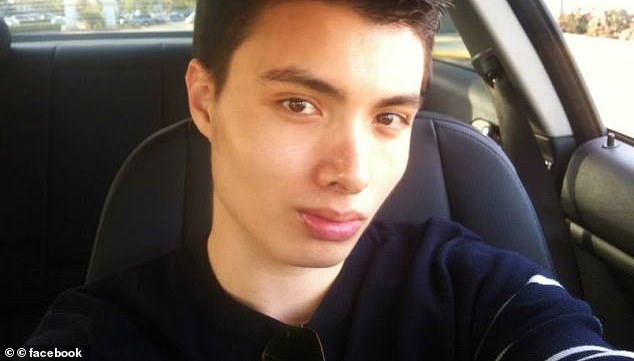 One of the most extreme phrases used by some is ‘going ER’ which refers to conducting a killing spree in the name of mass murderer Elliot Rodger.

‘LDAR’ also translates to Lie Down and Rot, which some incels use to express that there is no hope in life.

Although Riley stressed that he did not resonate with the community’s more extreme outlooks, he did admit to feeling jealous of women at one point.

He continued: ‘I wouldn’t say I was ever at the extreme point, more so just a point of jealousy and a really low point in my life. I would never wish ill-will on anybody. I don’t think I hated women and didn’t feel animosity.’ 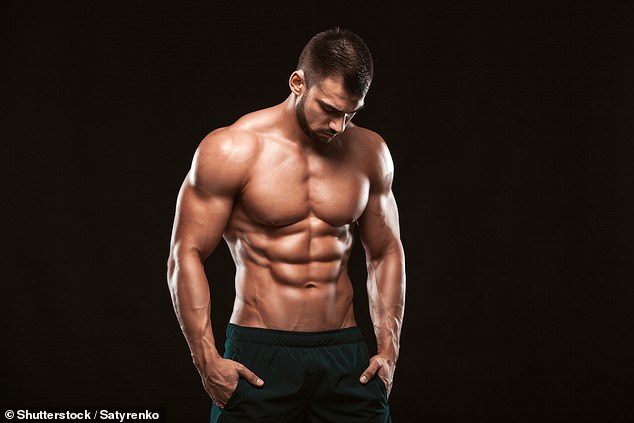 The word ‘gigachad’ refers to an extremely attractive, muscular and successful man while a chad is a conventionally attractive man (file image) 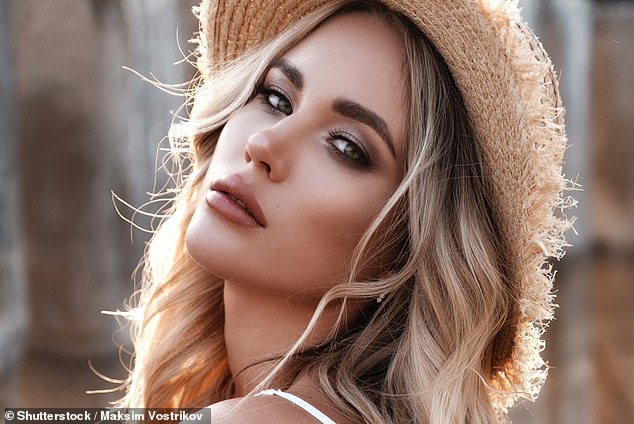 Riley was motivated to quit the incel community for good after learning more about the #MeToo movement a few years ago.

A long list posted online alleged that more than one hundred gamers in an internet Super Smash Bro community had committed sexual misconduct – some of which Riley had previously spoken with.

Nintendo said it was ‘deeply disturbed’ by the allegations and issued a statement to IGM.

The company expressed that it condemns ‘all acts of violence, harassment, and exploitation against anyone and that we stand with the victims.’

‘I never really saw it coming – it was disturbing. I thought, “oh god I don’t want to be around these people”,’ Riley said.

The incel community hosts a number of ‘pill’ ideologies that incels follow ranging in colours such as black, blue, red and purple (file image) 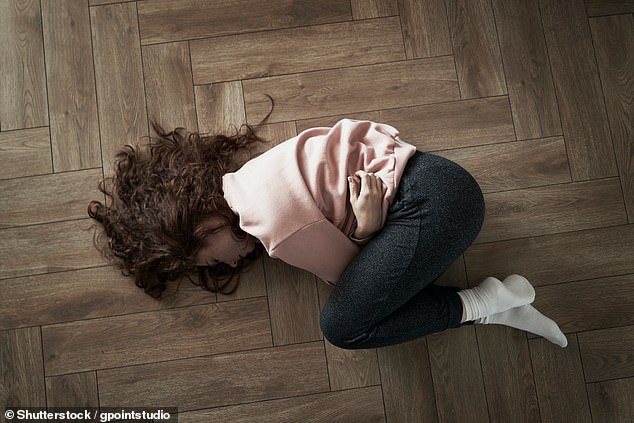 One of the more extreme phrases used by some members of the community is ‘LDAR’, translating to Lie Down and Rot, which some incels use to indicate that there is no hope in life (file image)

The 23-year-old has since been drawn to advice forums such as ‘incel exit’ on Reddit which has allowed him to talk with other incels who are looking to break out of the extremist community.

He continued: ‘I found incel exit which is more so a guidance for people who want to leave this very toxic community.

‘Thankfully I lived with a very supportive family – I am very thankful for that. I sent them a little bit about this stuff and they were like “yeah this is kind of disturbing you should probably not look at this”.’

Riley has also now managed to get a job building utility boxes for an electrical company. 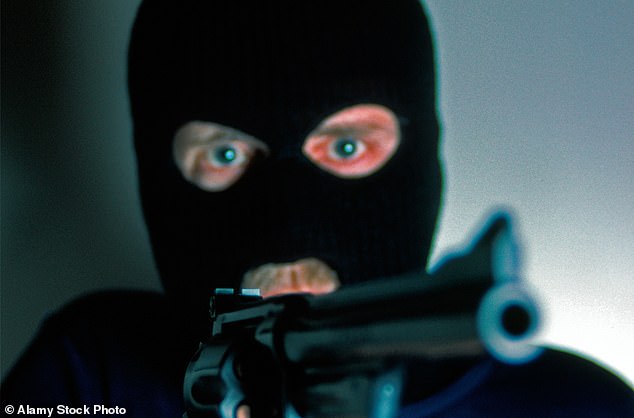 Mass murderer Elliot Rodger inspired some of the language now used by some members of the incel community. The phrase ‘going ER’ which refers to conducting a killing spree in the name of Rodger (file image)

But Riley feels that some type of charity support could help other young men who fall into the trappings of the incel community.

He said: ‘The thing with a lot of incels is that they need some kind of guidance. The reason why they have these feelings is for a reason it’s not like they have things completely perfect in life.

‘The things online makes people think this is how reality really works but it doesn’t – they are really extreme ways of feeling things.

‘Maybe they don’t have anyone else to look up to. You’ve got to understand that there always might be something causing this. A lot of them do not know where to go towards.’ 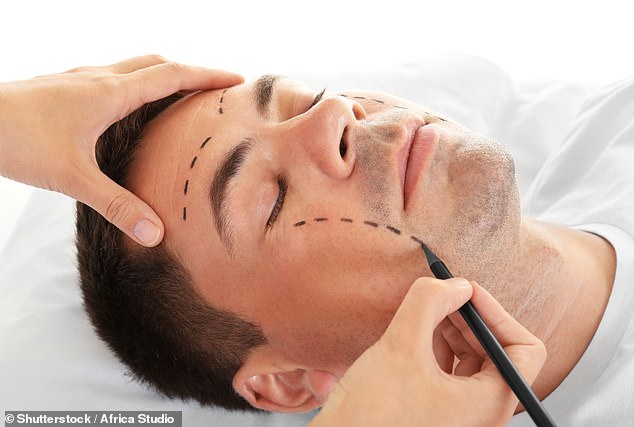 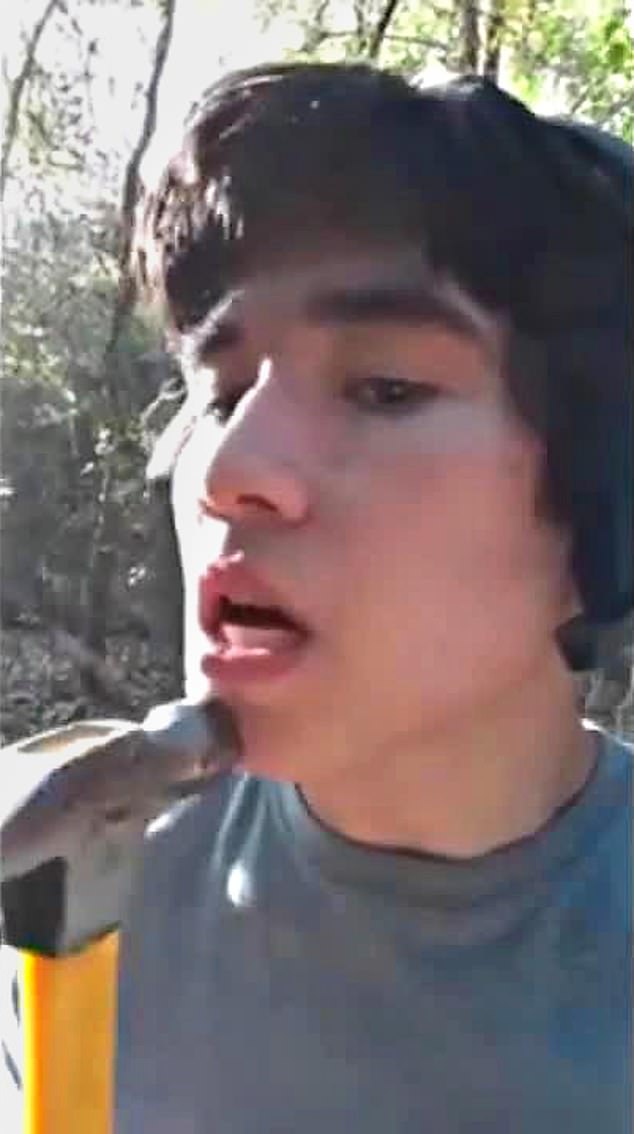 Some incels have taken ‘looksmax’ to another level, with some hitting themselves in the face with hammers in attempt to look more attractive 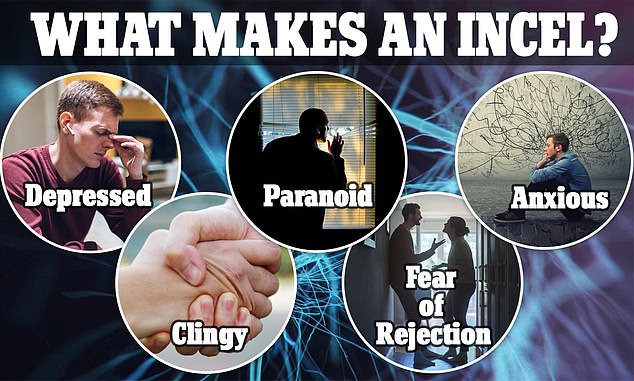 Being depressed, paranoid, anxious all make men more likely to become an incel, researchers from the University of Rome found

While Riley lives in the U.S, incel culture also persists in the UK where there have been calls to make it part of school curriculum in an attempt to tackle misogyny.

Teacher, Kathryn Downs from a Leeds secondary school previously said: ‘A study in October 2021, suggested that there was a 6.3 per cent chance of being suggested an incel-related video by YouTube within five “hops” of a non-incel related video.

‘Clearly this shows the dangers of failing to support and improve the mental wellbeing of boys within schools.

‘Language and stereotyping attitudes such as “cry like a girl” or “fight like a boy” means that boys as well as girls still struggle to express their own difficulties with their mental wellbeing or feel like they need to suffer in silence.’