MailOnline has had a behind-the-scenes look at the newly upgraded 500-capacity IMAX cinema in London ahead of its official opening to the public today.

The legendary cinema, which originally opened in 1999 but is now renovated by the British Film Institute (BFI), features a jaw-dropping screen measuring 85 feet wide and 65 feet high – taller than four double decker buses.

It also has laser projection technology and a powerful 12-channel sound system to provide cinemagoers with a more ‘immersive’ and life-like viewing experience.

MailOnline got a sneak peek at the cinema, located in the middle of a roundabout in London’s Southbank district, including the whopping new screen in action and the laser technology inside the projection room.

BFI IMAX has now reopened to the public with screenings of the new Marvel blockbuster ‘Black Panther: Wakanda Forever’.

BFI IMAX is located in a huge glass building in the middle of a roundabout in London’s Southbank district, a short walk from Waterloo station 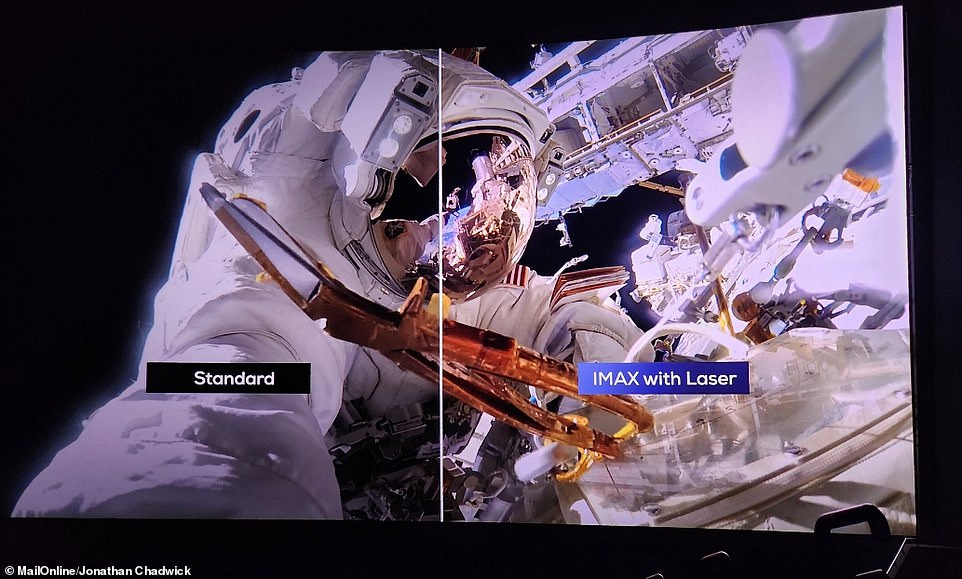 MailOnline got a sneak peek at London’s renovated cinema, including the whopping new screen – measuring 85 feet wide and 65 feet high – in action 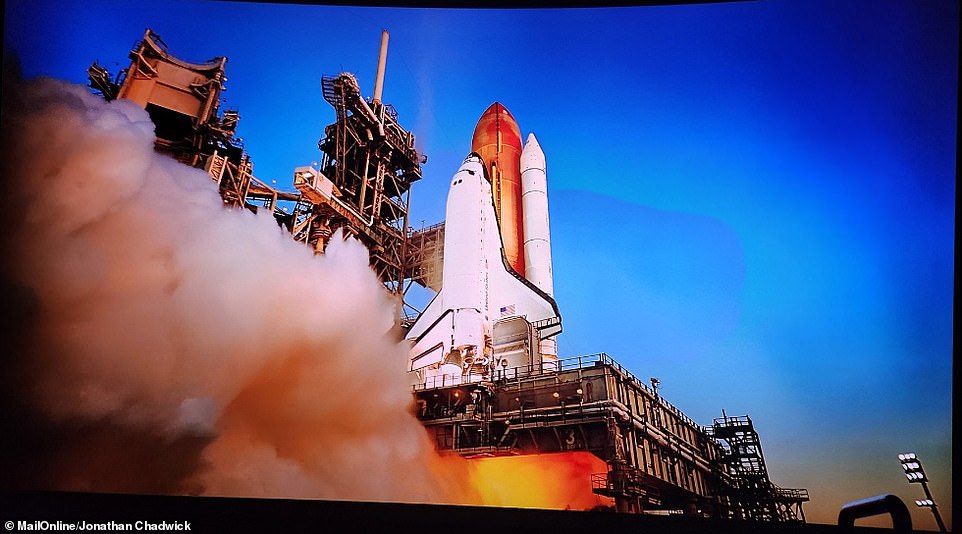 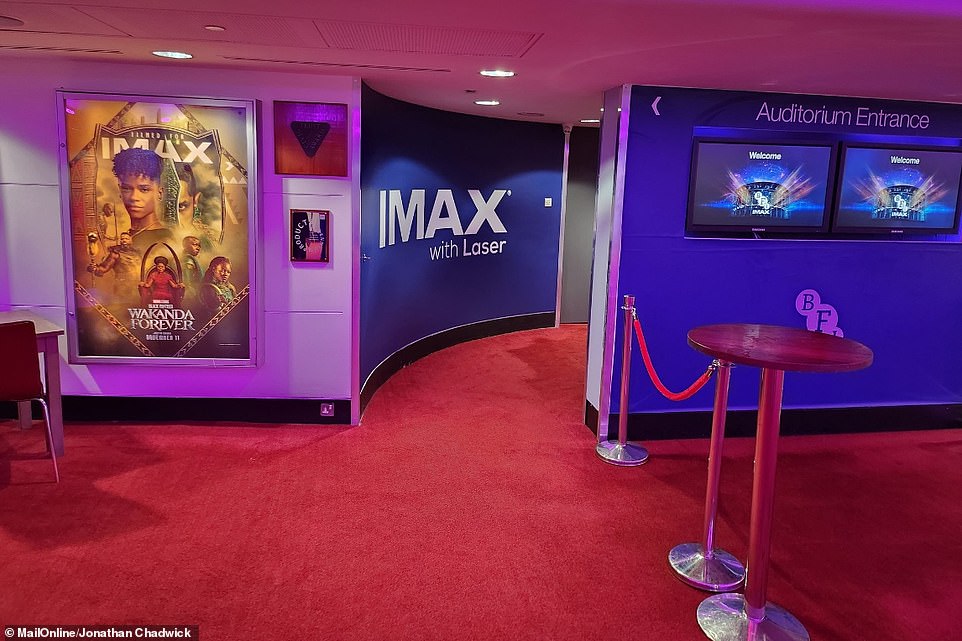 BFI IMAX has reopened to the public today with screenings of the new Marvel blockbuster ‘Black Panther: Wakanda Forever’ 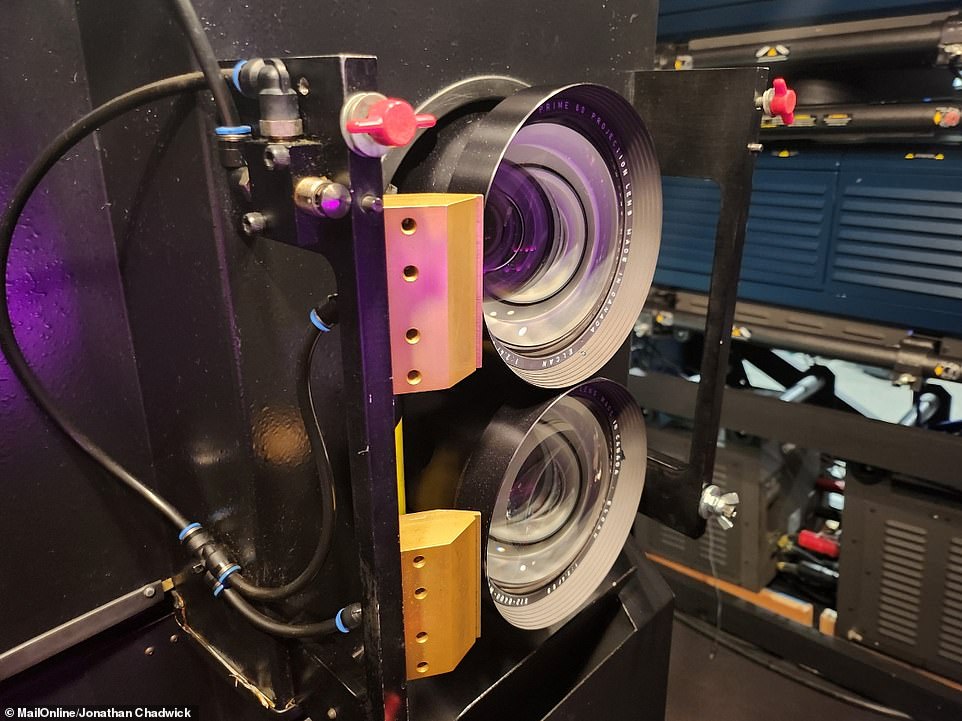 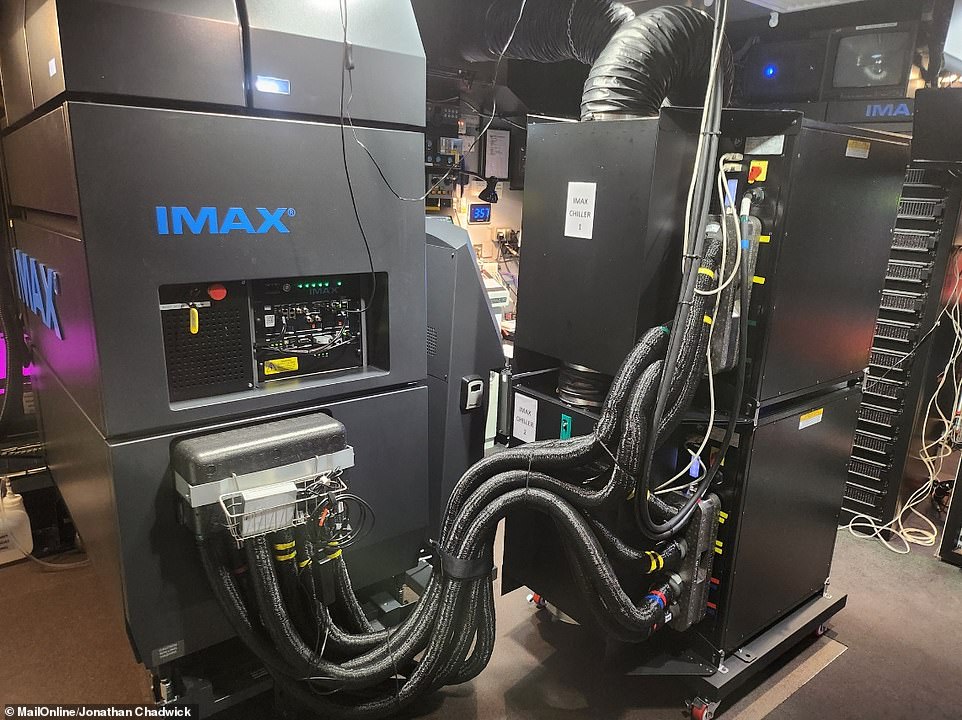 Pictured is the laser system in BFI IMAX’s projection room. BFI wouldn’t reveal to MailOnline how much the new system cost

IMAX is a system of high-resolution cameras, film formats, projectors, and theaters with very large screens taller than the theatrical standard.

IMAX produces an image approximately 10 times larger than that from standard 35 mm film.

IMAX launched in 1971, but it wasn’t until the 2000s that the format really became popular.

Since launching 23 years ago in 1999, BFI IMAX in London has become one of the most notable IMAX cinemas in the world.

The renovated cinema is now operated by BFI after being operated by Odeon for the past 10 years under a concession agreement.

BFI IMAX is a huge circular glass building located in the middle of a busy central London intersection near Waterloo station, only accessible through hidden entrances that are reached through an underpass.

Although the IMAX has a London Underground line just 13 feet below, it is totally sound and vibration-proof, as the entire upper structure sits on anti-vibration bearings to prevent noise propagation.

Unlike the commercial ‘multicomplexes’ that are dotted around the country, BFI IMAX has just one screen, but its hefty size shows that quality is more important than quantity.

Entering the lobby it looks like any other cinema, albeit slightly rounder, but once you climb the stairs and enter the theatre, the vastness of the new screen really catches your breath.

Like a massive cliff face, standing too close for too long can give your neck cramps. Fortunately, even the closest seats are a good distance away.

The new cinema screen is also 4K, meaning it has more than eight million active pixels – the incredibly small points of light that are fired out of the projector and onto the screen.

Dominic Simmons, head of technical services at BFI IMAX, told MailOnline that the new screen – officially the biggest cinema screen in the UK – was shipped in from Canada only a couple of weeks ago. 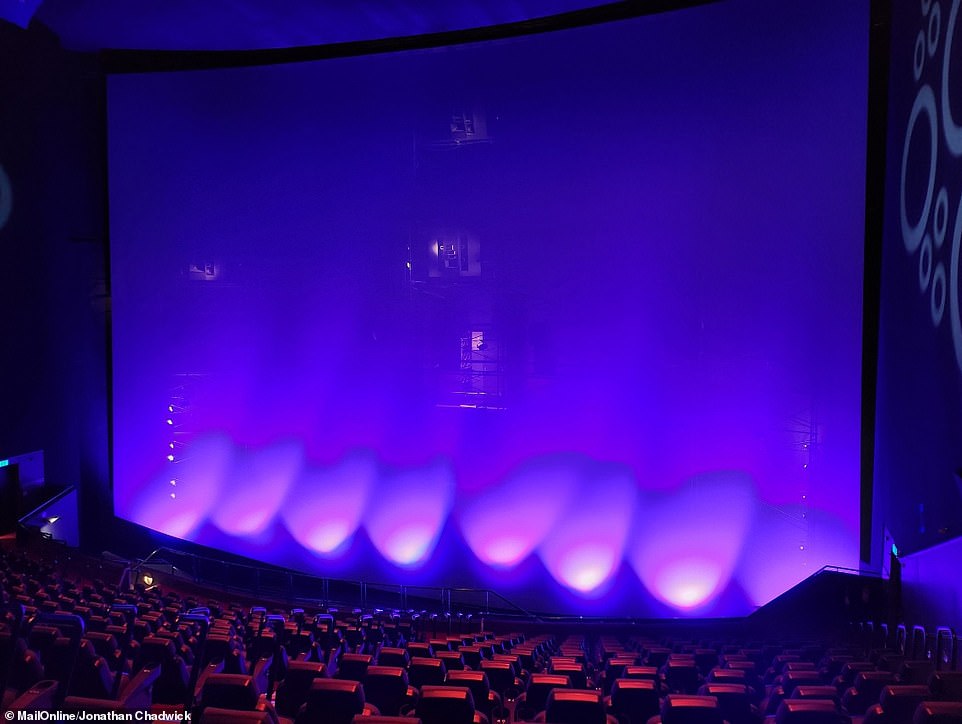 At BFI IMAX in London, the scale of the new silver screen – measuring 85 feet wide and 65 feet high – really takes you by surprise 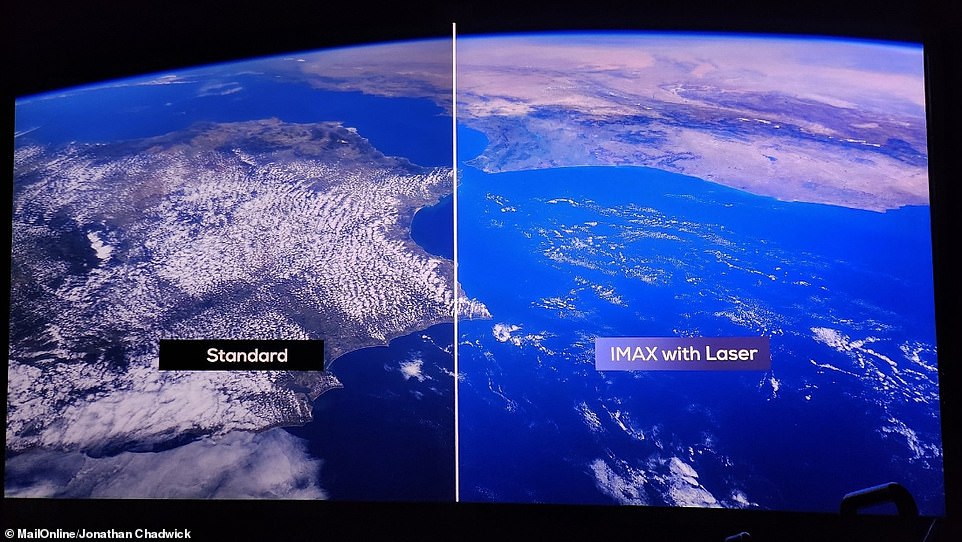 IMAX says: ‘IMAX with laser has been designed from the ground-up exclusively for IMAX screens. The experience is set apart by its next-generation 4K laser projection system’ 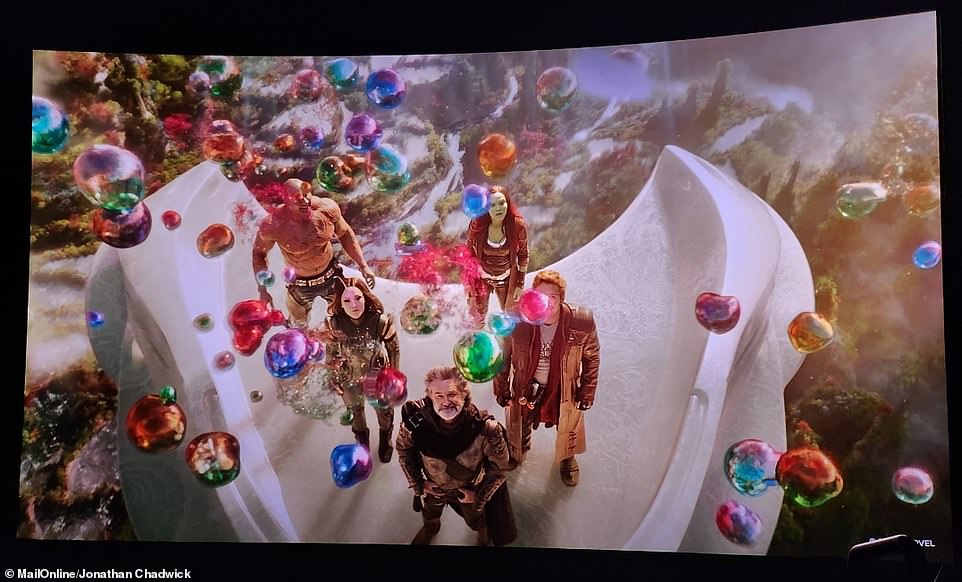 A clip from ‘Guardians of the Galaxy 2’ on the new screen. BFI IMAX reopens on Friday with screenings of the new Marvel blockbuster ‘Black Panther: Wakanda Forever’ 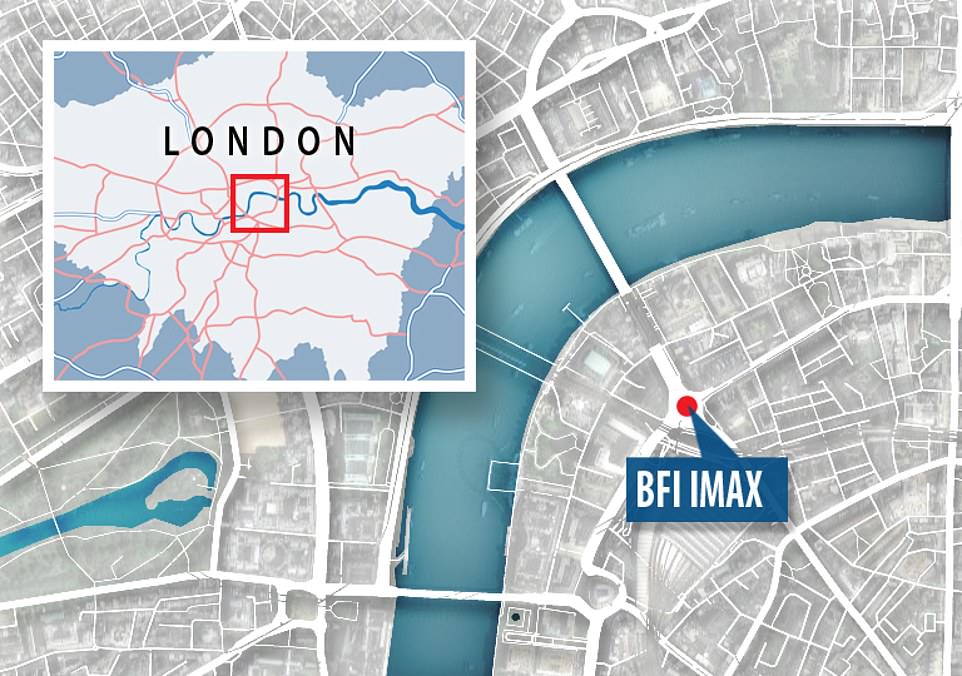 BFI IMAX is located in the centre of a roundabout junction in central London, a short walk from Waterloo station and accessible only through an underpass

Amazingly, it’s not even the largest screen in the world; that title goes to the Panasonic IMAX Theatre in Sydney, Australia, which measures 117 feet by 97 feet.

The new BFI screen is a ‘sliver’ screen – a classic type of projection screen that’s covered with reflective paint to give it a highly reflective surface.

Due to the fact that there are speakers behind it, the screen is also perforated in order to let the sound through, although there are also speakers on the ceiling and either side of the audience.

After viewing some short films and being battered by the heart-palpating IMAX sound waves, MailOnline climbed to the top of the theatre to the projection room, which houses the new laser projector.

BFI wouldn’t reveal to MailOnline how much the new laser system cost, however.

In the projection room – a paradise for film fans – the laser projector sits alongside the old IMAX 70mm film projector, one of fewer than 60 that exist globally.

This projector is still used for various 70mm showings of blockbuster films, including several made by British director Christopher Nolan and US director Paul Thomas Anderson.

Both directors are fans of the 70mm format – a type of high-resolution analogue film stock that’s twice the width of ordinary 35mm film, proving more detail in each and every frame. 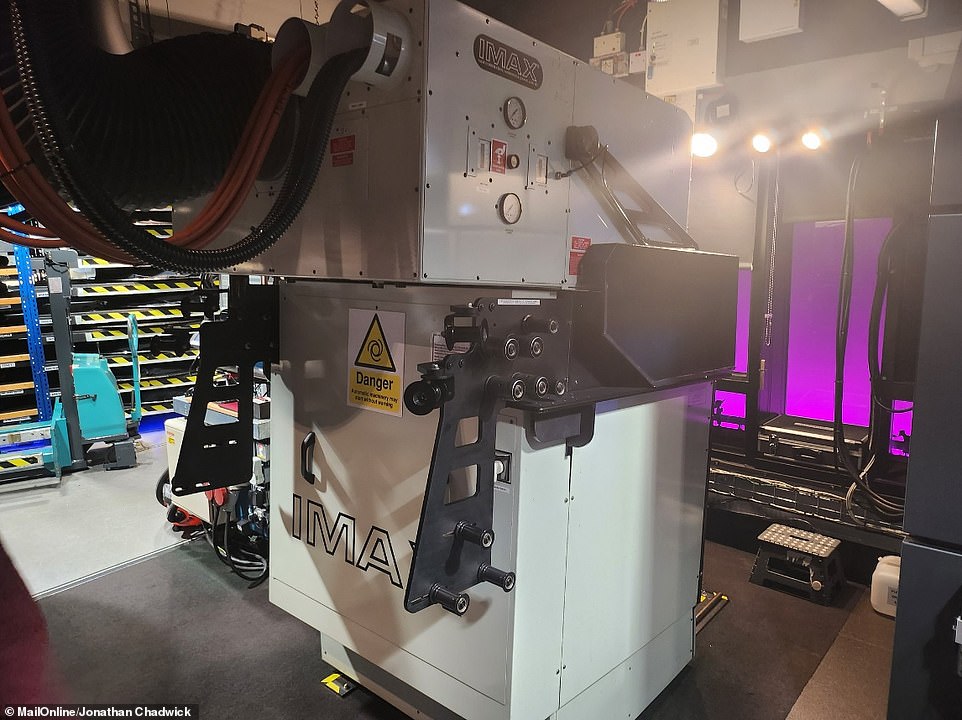 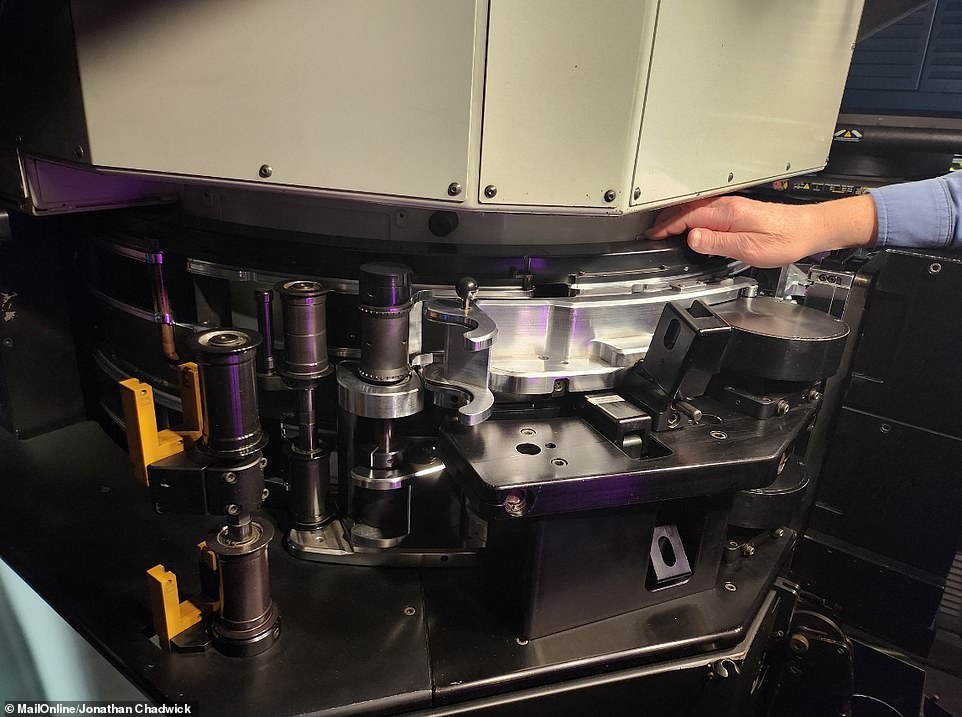 A projectionist operates the IMAX 70mm film projector. The 70mm film reels are so heavy they need to be moved around the room with a small forklift

Nolan shot the entirety of his 2017 war epic ‘Dunkirk’ using IMAX cameras and 65mm film (although it was projected in 70mm).

In the BFI IMAX projection room, a collection of 70mm reels for films including ‘Inception’ and ‘Batman Begins’ are so heavy they need to be moved around with a small forklift.

There’s also an older machine for projecting 35mm, which was the standard projection and production format from 1909 until around 2011 when digital formats took over. 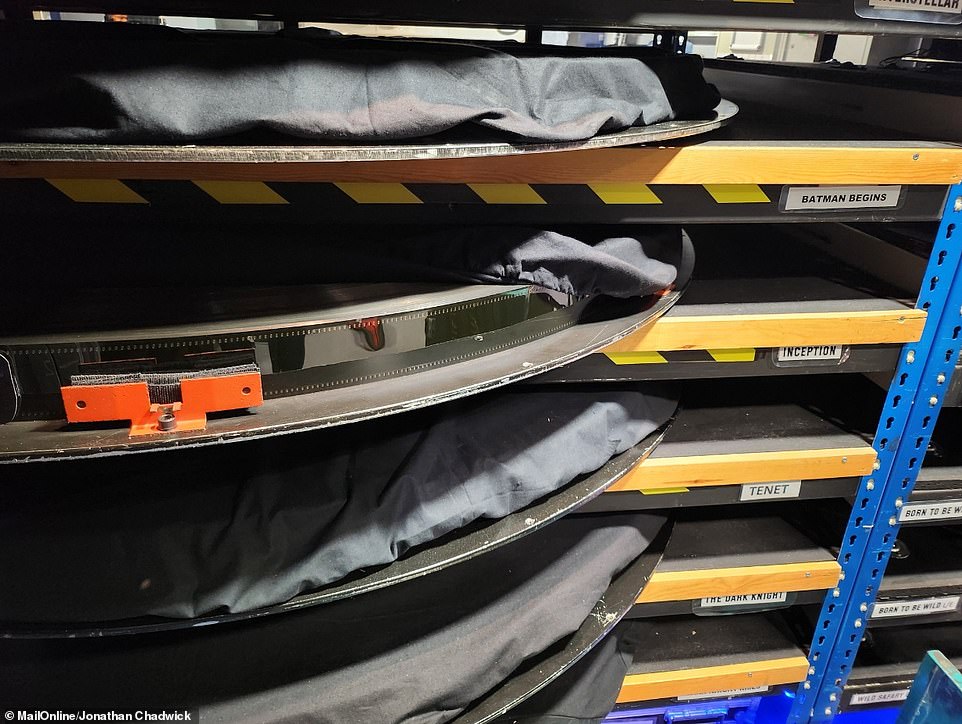 The old IMAX 70mm film projector is used for various showings of blockbuster films, including several made by Christopher Nolan, a 70mm fan 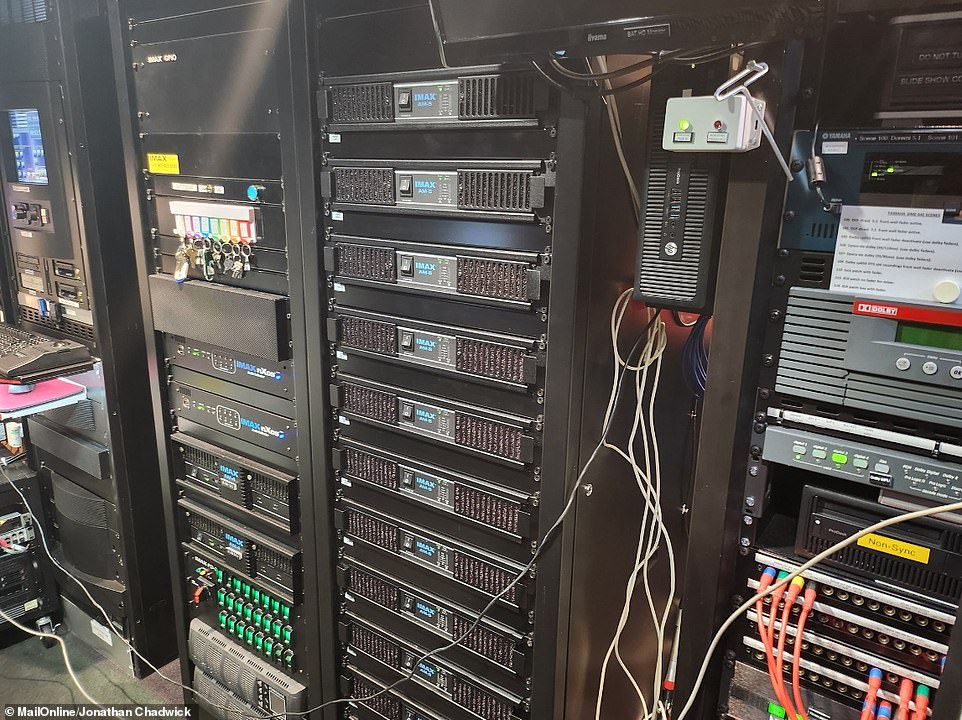 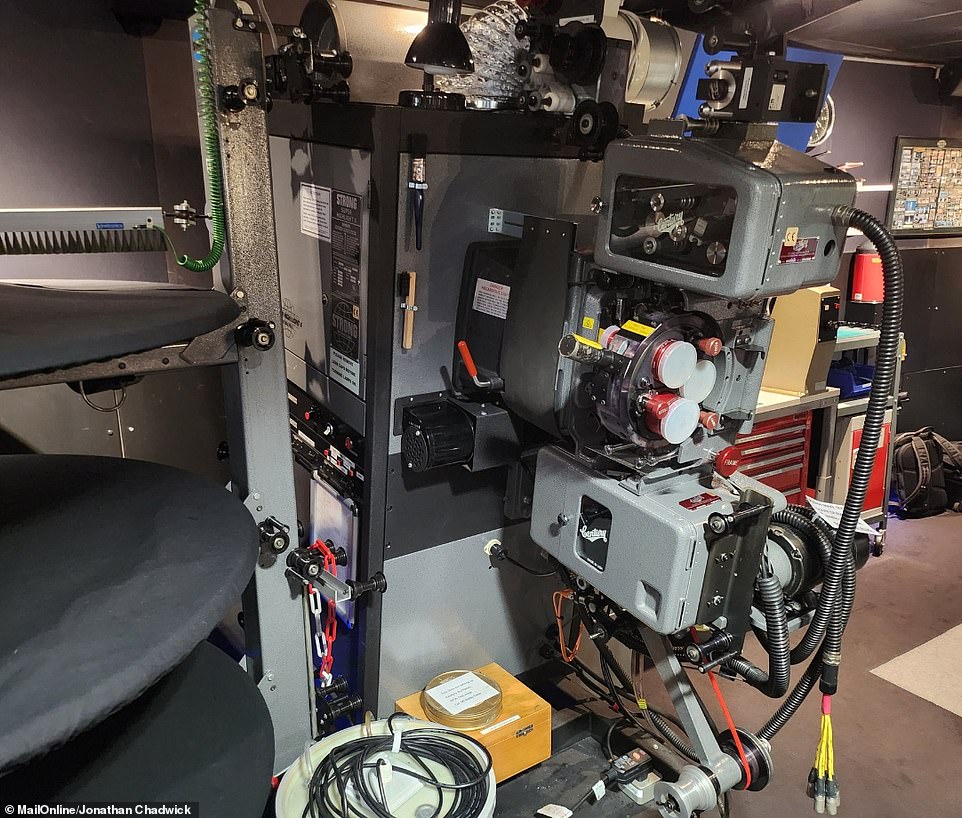 Pictured, a dual format 35/70mm film projector, capable of projecting 35mm – which was the standard projection and production format from 1909 until around 2011 when digital formats took over

BFI IMAX has a slightly smaller capacity than before (493 seats compared with 500), although there’s now more wheelchair space (enough for four wheelchairs), as well as plush new seats and fresh carpeting.

Simmons told MailOnline that the upgrade to the theatre is only ‘phase one’ of the venue’s renovation; phase two will involve a refresh of the lobby.

‘Phase two are the areas outside the screen – that’s down the line – but for now we’re so proud to offer one of the most immersive cinematic experiences in the world on the largest screen in the UK,’ he told MailOnline.

BFI also said the newly renovated space will host immersive and extended reality (XR) content, such as augmented reality, as well as special events and films that showcase BFI National Archive, which focuses on preserving and restoring films.

THE UK’S LARGEST CINEMA SCREEN: A HISTORY OF BFI IMAX

BFI IMAX was  built for the British Film Institute (BFI) and opened on May 1, 1999. The glass structure was designed by late English architect Bryan Avery, who also oversaw the £22 million refurbishment of the London Transport Museum.

Within the first 12 months it is estimated that half a million people visited the new cinema, transforming a desolate roundabout in Waterloo to a major tourist attraction. 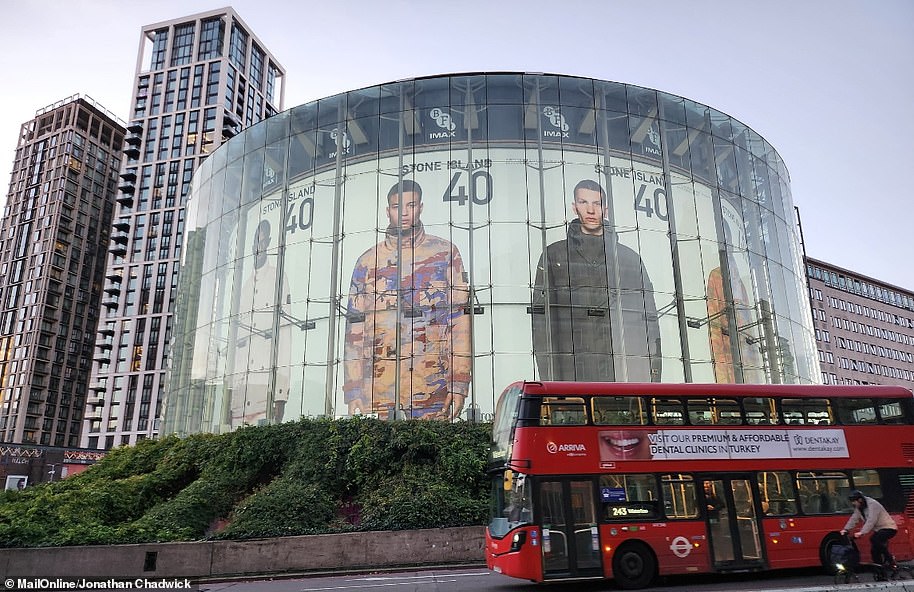 Looking like a circular glass drum in the middle of a busy London intersection, BFI IMAX has been delighting cinemagoers since its opening in May 1999. Pictured here on November 9, 2022

Renowned figures have attended events at BFI IMAX, including Leonardo DiCaprio, Angelina Jolie, Meryl Streep, Salma Hayek and even Prince William. Tom Cruise is said to be a fan of the venue and sometimes likes to visit ‘incognito’.

In 2012, the screen was replaced and a digital IMAX projector was installed alongside the existing 70mm projector.

Later that year, the BFI announced Odeon had been selected to operate the cinema under a concession agreement, although BFI maintained ownership.

The renovated cinema is now operated by BFI once again, after being operated by Odeon for the past 10 years. It has a new 65 foot IMAX screen, 4K IMAX with laser projection and powerful 12 channel sound technology.