While pawnbrokers may conjure up images of old smart phones and knock-off watches – one chain of lavish shops has become an unlikely hit with the super-rich.

Yesterday, pop star Janet Jackson was seen leaving Chelsea’s Posh Pawn store, part of the Prestige Pawnbrokers chain, where she had reportedly been eying up Hermes handbag which can cost up to £29,000.

And while it may seem odd that a woman with an estimated fortune of £150million was browsing around a pawnshop, it’s a well-known secret among the fashion conscious that it’s far easier to find an elusive Birkin bag second hand than it is to pop into Hermes.

The chain of stores was founded by James Constantinou in the pricey Surrey town Weybridge in 2009 after he spotted an opportunity to profit off wealthy people with cashflow problems during the recession.

From Cartier to Chanel and Rolex, the upmarket pawnbrokers sells an array of lavish goods which have become popular with celebrities who get to snap up rare pieces and boost their eco credentials by buying ‘pre-loved items’.

‘Celebrities are now becoming very on trend in respect of sustainability and this is reflected in their shopping for luxury goods’, Constantinou, 55, told FEMAIL.

Pop star Janet Jackson, who is worth £150million, was seen leaving Chelsea’s Posh Pawn store, part of the Prestige Pawnbrokers chain, where she had reportedly been eying up Hermes handbag which can cost up to £29,000. 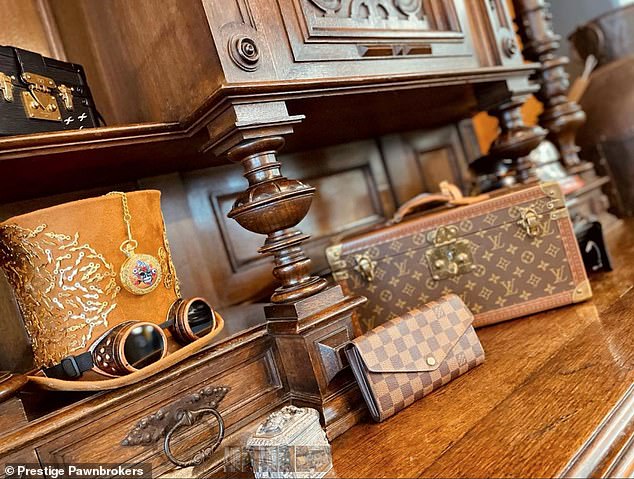 The goods on sale include Louis Vuitton handbags, luggage and other vintage or bespoke pieces  that can’t be found in a department strore or high-end designer boutique 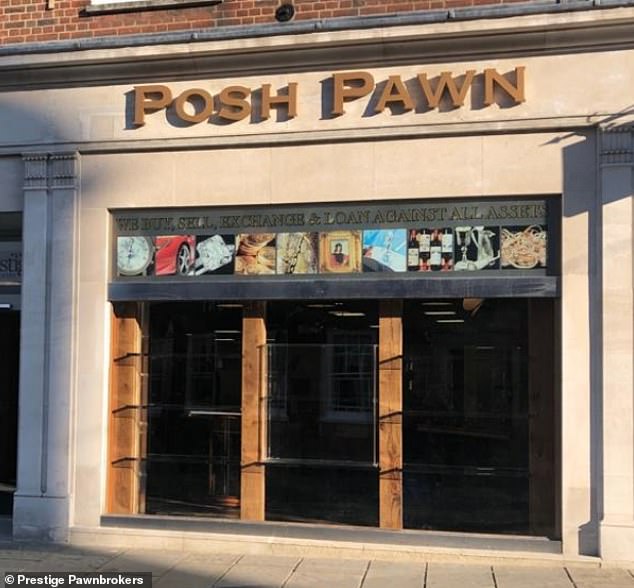 Prestige Pawnbrokers, founded by founded by James Constantinou in 2009, is a luxury pawnbroker which offers premium pre-owned goods. Pictured, the exterior of Chelsea-based store

The store, which features in Channel 4’s Posh Pawn series, sells an array of vintage high-end brands and bespoke pieces including Cartier rings and earrings, which  can cost up to £79,950 each.

On their online store, shoppers can browse a set of Tiffany and Co Soleste earrings for £9,950, Cartier panther earrings in diamond and emerald for £84,950 and a £39,950 Rolex.

With limited stock and extensive waiting lists to buy the elusive Birkin bag in a Hermes store, Prestige Pawnbrokers also offer shoppers the chance to get their hands on rare Hermes pieces. 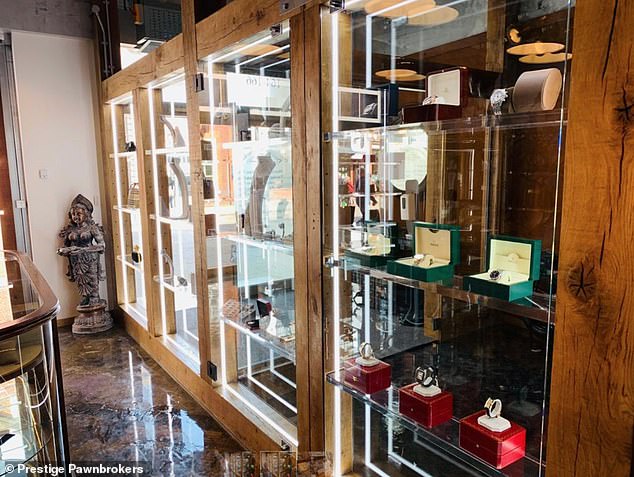 From Cartier to Rolex, the upmarket pawnbrokers sells an array of lavish goods which have become popular with the eco-conscious fashion set 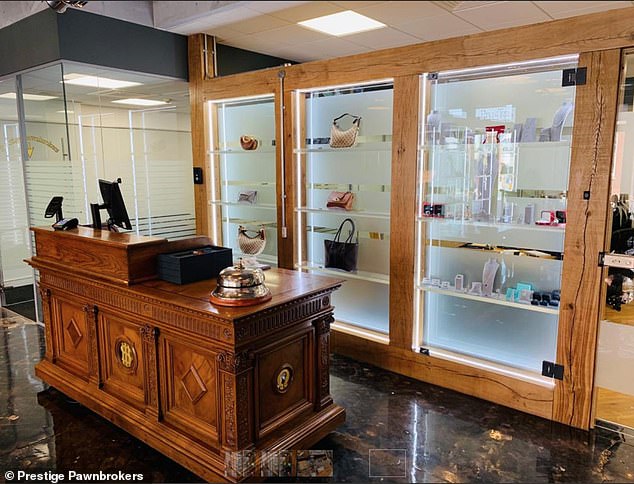 With limited stock and extensive waiting lists to buy the elusive Birkin bag in store, Prestige Pawnbrokers also offer shoppers the chance to get their hands on rare Hermes pieces

The store’s luxury handbag expert Claudia Valentin who shot to fame on the Posh Pawn TV show previously told FEMAIL: ‘It’s a lot easier to get a Birkin second hand. I’ve got second-hand bags in that haven’t even been used that are still in the box with their dust covers on.

‘Fashions change, things become last season. There’s a new colour. Fashion victims that have bags as status symbols want to update as and when a new one comes out,’ she explained.

Their online store boasts two of the coveted handbags, the Kelly in purple for £17,995 and the navy Crocodile Bag for £34,950.

Constantinou said that fashion-conscious shoppers are turning to his shops rather than the likes of Harrods or Harvey Nichols to avoid the lengthy store waiting lists, which can be as long as two or three years for Hermes bags. 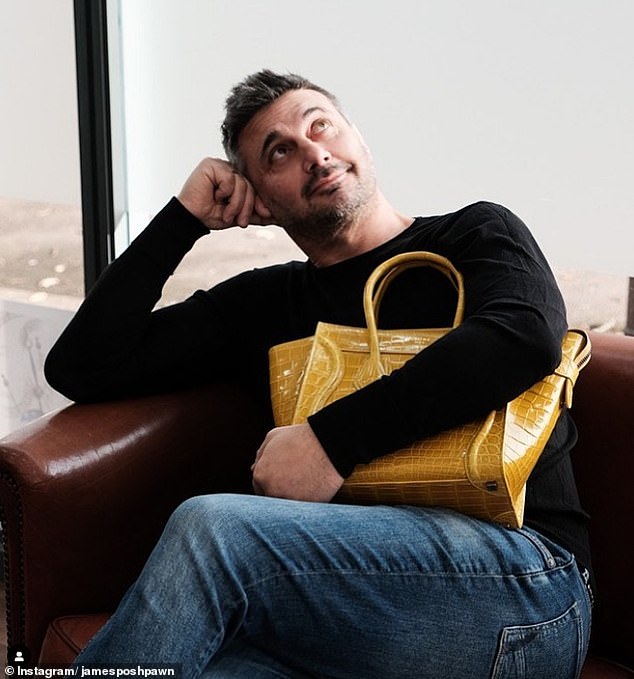 James Constantinou, 55, set up Prestige Pawnbrokers in the pricey Surrey town Weybridge in 2009 after he spotted an opportunity to profit off wealthy people with cashflow problems during the recession.

‘Paris head office will call all the stores and let them know how many they can sell in that week or month,’ Claudia said.

‘If you’re allowed to sell eight in that month you pick and choose who to sell them to.

‘If you’re a “somebody” you can get one. Or if you have contacts or friends who work in the store you might be lucky. They can do you a favour, but it’s up to them.’

With even celebrities struggling to get their hands on the elusive arm candy, it’s no wonder they’re turning to a store like Posh Pawn instead.

‘Consumers are unable to purchase vintage and luxury items that have very small production numbers or in some cases are one of a kind’, James said.

‘Most items are handmade by artisans and simply can’t be produced in high volume which leads to long waiting lists for products.

‘We source particular exotic brand items for individuals as well as holding stock of these items at our retail stores.’

He says it’s often the case that wealthy shoppers have the money to purchase a product brand new, but simply can’t find it anywhere else but one of his pawnbrokers.

‘This regularly occurs due to small production lines and high demand so products sell out quickly or long waiting lists, so people come to us to source an pre-loved item quicker’, he said. 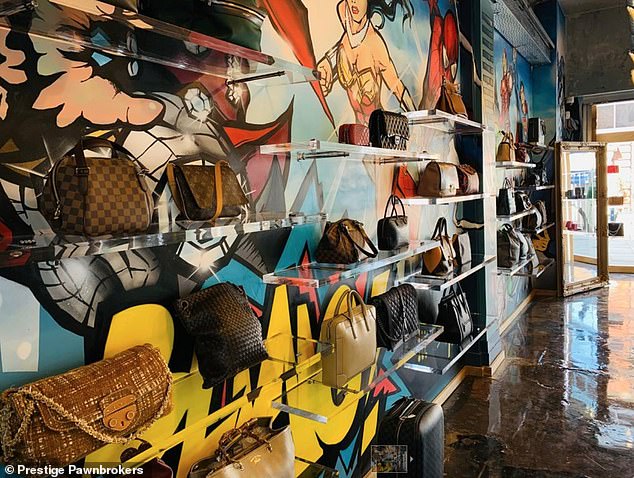 James says their stores throughout the county see weekly visits from various celebrities, who either visit in person or use personal shoppers to locate rare and sought after luxury brand items.

The businessman says client include famous American socialite, who purchased a vintage Hermes bag from the 1960s after failing the find the elusive piece anywhere else.

He explained: ‘An example of an item that we sourced for a very well known celebrity client was a Vintage Hermes mini Kelly solid silver bag which was one of only ten ever produced dating back to the early 1990s.

‘This particular Hermes has only come to the market a couple of times and is probably now the most sought after on the market. Prices will only increase with time.

‘The client is based in America and is part of a Dynasty in terms of her families notoriety, she is said to be thrilled with the piece.

‘Although purchased around four years ago at £70,000 the item could be worth double that today if it were to come to market.’