Ever fancied relaxing on an airline seat in the comfort of your own home or proudly displaying an aircraft tail cone in your garden?

Well, there is a place you can go to snap up second-hand aeroplane parts like these – the Delta Flight Museum in Atlanta, Georgia.

On the second Friday of each month Delta Air Lines holds regular surplus sales there, to sell off items it deems it no longer needs.

On the second Friday of each month Delta Air Lines holds regular surplus sales there, to sell off items it deems it no longer needs. Pictured are some of the items that were available to buy at a sale earlier this month 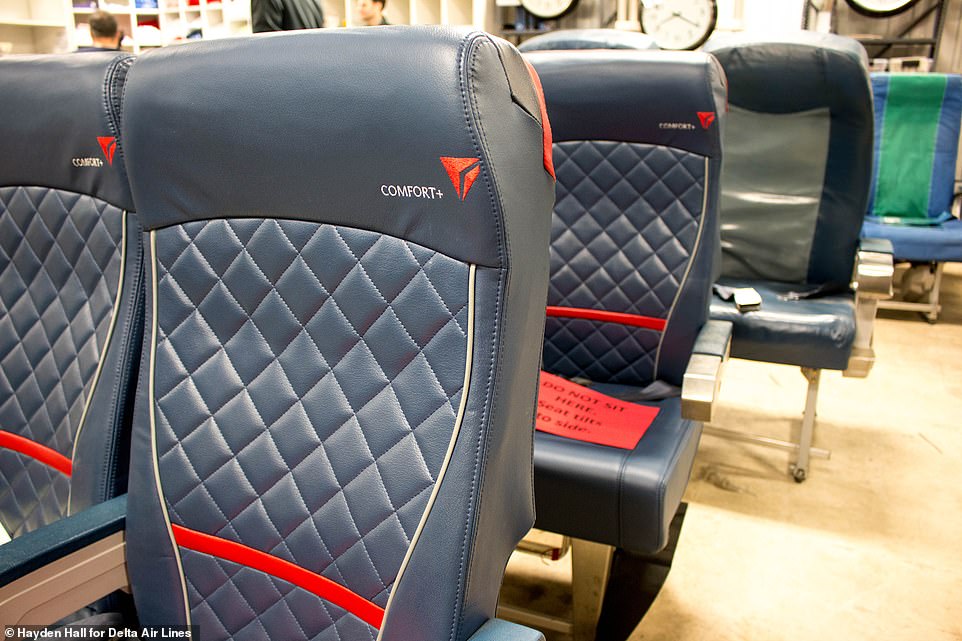 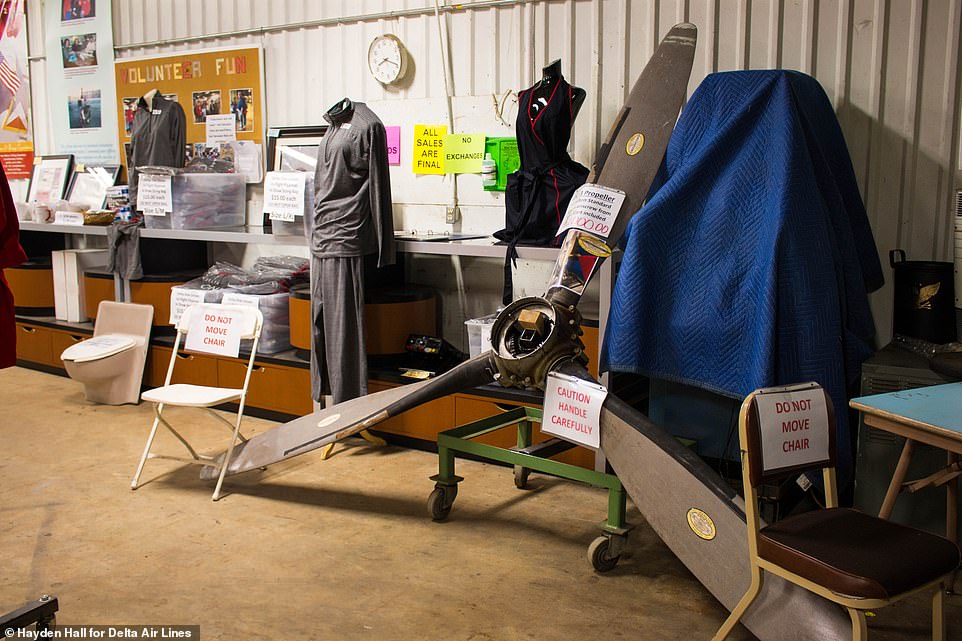 One of the more unusual items people could snap up at the last sale was a propeller from a former DC-3 aircraft. All the money raised goes towards the upkeep of the Delta Flight Museum

Hordes of aviation fans and bargain hunters turn up there in a bid to buy their own piece of airline history, with the money raised going towards the upkeep of the facility.

No two sales are ever the same, as staff working at the museum have no idea what will be surplus and coming their way each month.

At a sale that took place earlier in February, among the items up for grabs were surplus galley carts, old staff uniforms, mountains of wing badges and even a commode from the Spirit of Delta aircraft.

Judy Bean, who manages the Delta surplus sale, told MailOnline Travel: ‘We usually get around 200 customers come to the sale each month, and they are all types of people, young and old.

‘The majority are Delta employees but as it is also open to the public, we get a lot of people who just love airplanes or just want to buy a bargain. 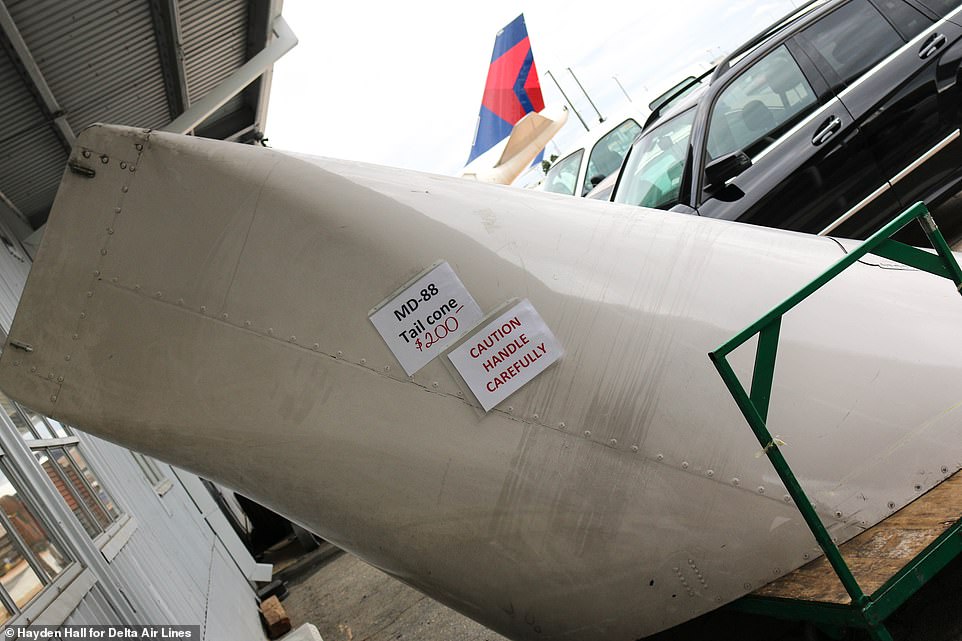 No two sales are ever the same, as staff working at the museum have no idea what will be surplus and coming their way each month. Pictured is an MD-88 tail cone that was available to buy for $200 (£155) at the most recent sale 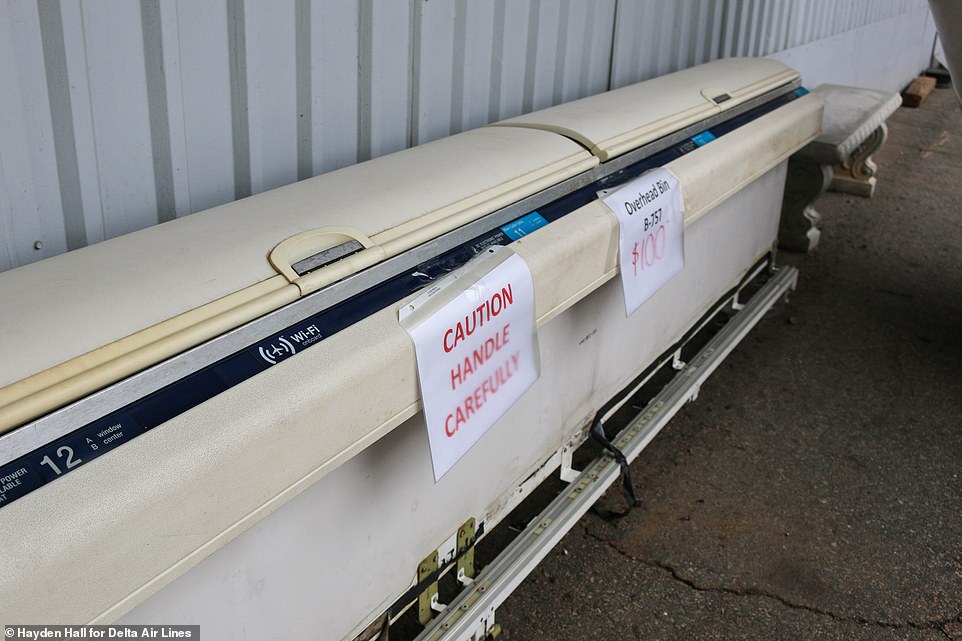 Around 200 people usually visit each sale, mainly made up of aviation enthusiasts and bargain hunters. Pictured is an overhead bin from a Boeing 757 – available for $100 (£77) 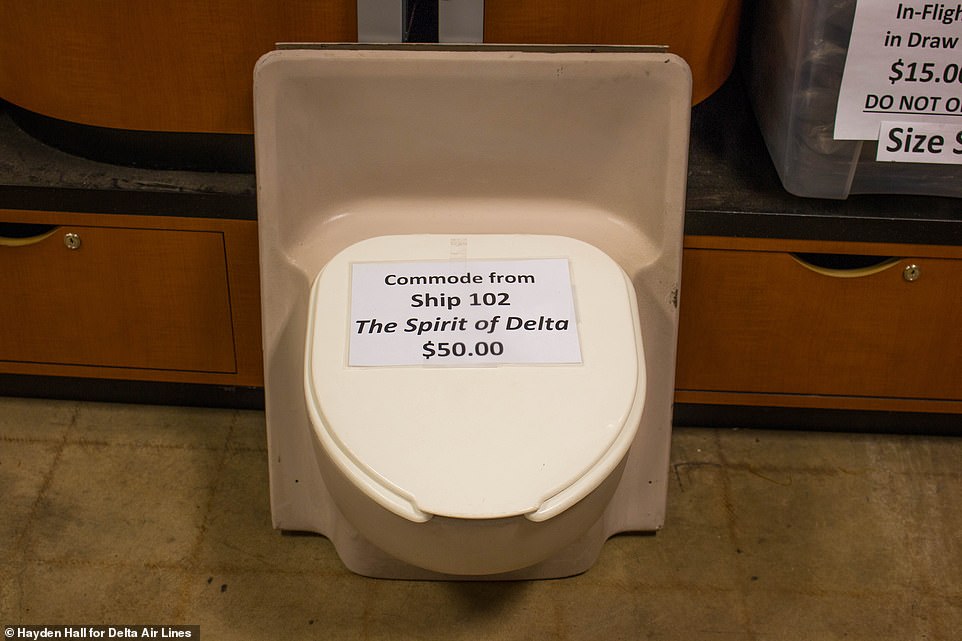 Even a commode from the Spirit of Delta plane was available – for $50 (£38). One customer at a previous sale bought an airline toilet and installed it in his home

‘We get people who drive for hours to come here or even take flights across the country.

‘The staff at Delta know that if there is something that is obsolete or about to be decommissioned, they should let me know as most things will sell.

‘The most common items that we have in the sale is aircraft seats, whether they be from coach, business or first class.

‘Some of the most unusual items we’ve had on sale are tail cones. We’ve currently got a propeller from a DC-3 plane and also a commode from the Spirit of Delta plane [the first 767 in its fleet].

While Tiffany Meng, the director of operations at the Delta Flight Museum, added: ‘Other things come in waves. At one point Delta was switching all of its galley carts and we got a lot of those to sell.

‘We tell people they have to take the items they buy away that day so many come in big cars or vans. Or they go straight to Dash (Delta’s cargo service) so they can ship them home.’ 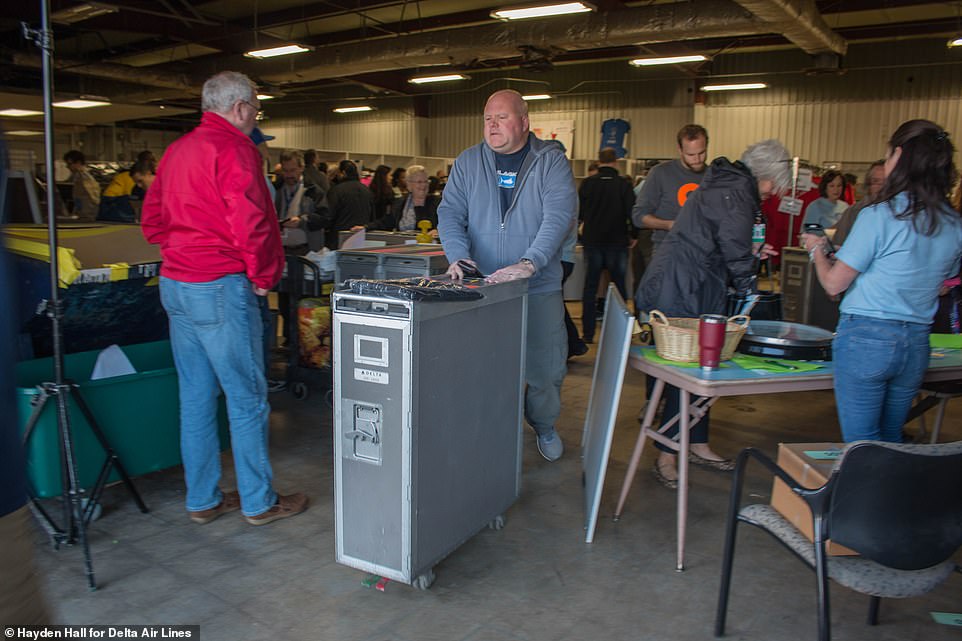 One customer wheels away his newly purchased galley cart at a sale earlier this month. Tiffany Meng, who works at the Delta Flight Museum, said galley carts are popular as people can store their tools in them 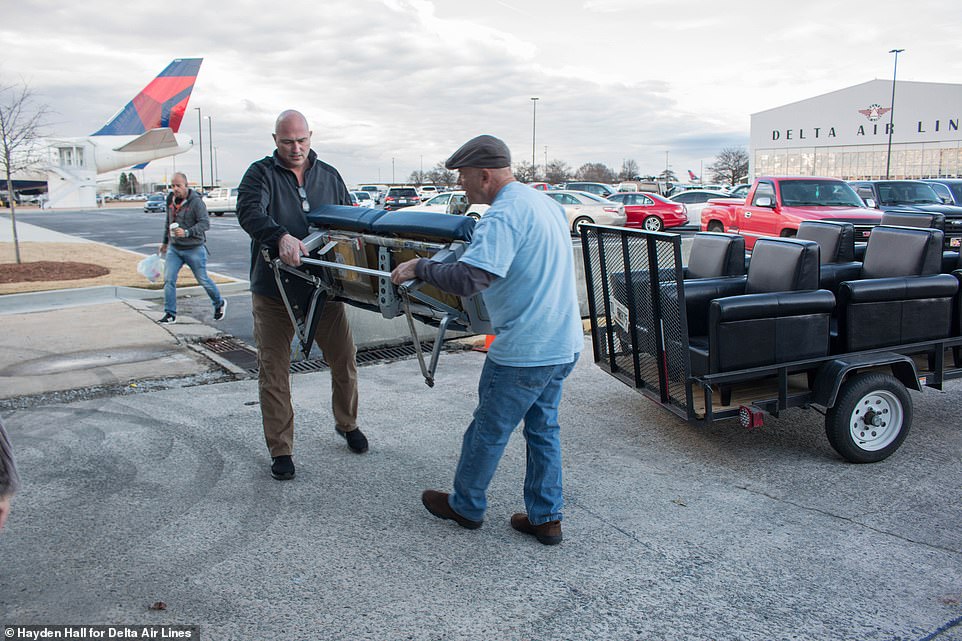 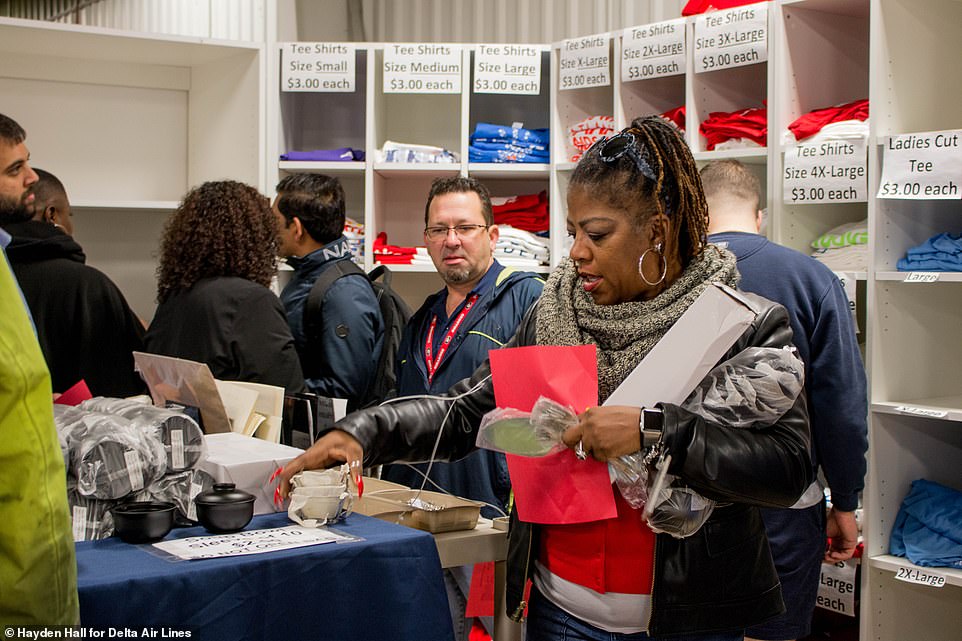 Bargain hunters snap up crockery, cutlery and other cookware as well as old staff T-shirts at Delta’s most recent surplus sale 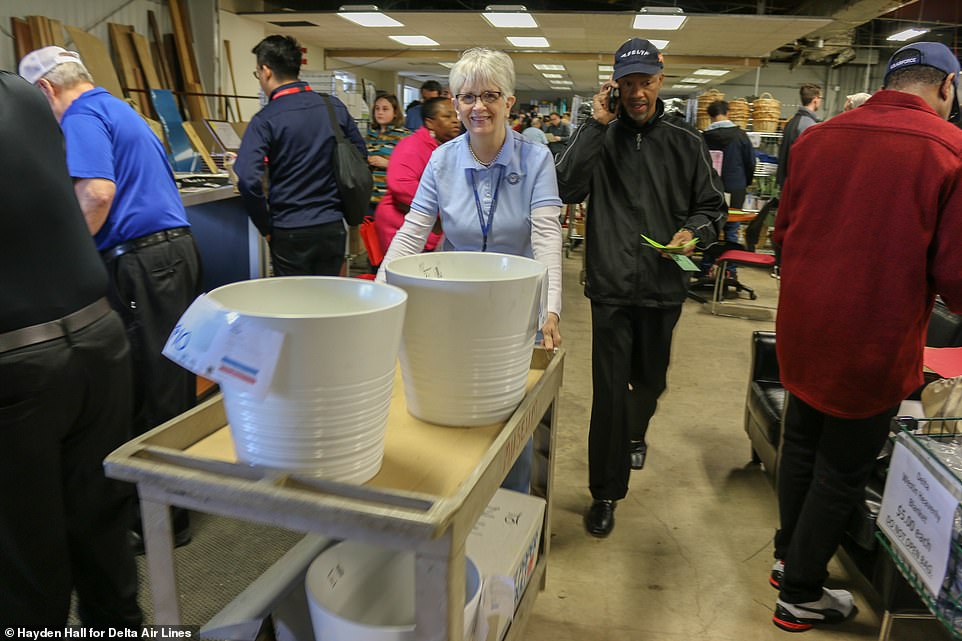 Judy Bean, pictured, who runs the sales at the Delta Flight Museum. She says many Delta employees give her unwanted items to put in the sale

Some of the most unusual items are donated.

For Judy, one of the most surprising items to be sold was a full crew rest area that had been removed from an aircraft.

Judy explained: ‘It had two bunk beds, a sink and a mirror. The man who bought it had to have it put into his home by crane to complete his replica plane.

‘We also had a man who bought a bulk head door and I was really concerned it was too big for him to take away.

‘We had to use a fork lift truck to get it into his truck. But it worked and once he got it home, he installed it in his house as the door to his wine room.’

And Tiffany added: ‘Another man bought an airplane lavatory that he had installed into his house with all of the plumbing so it fully works. 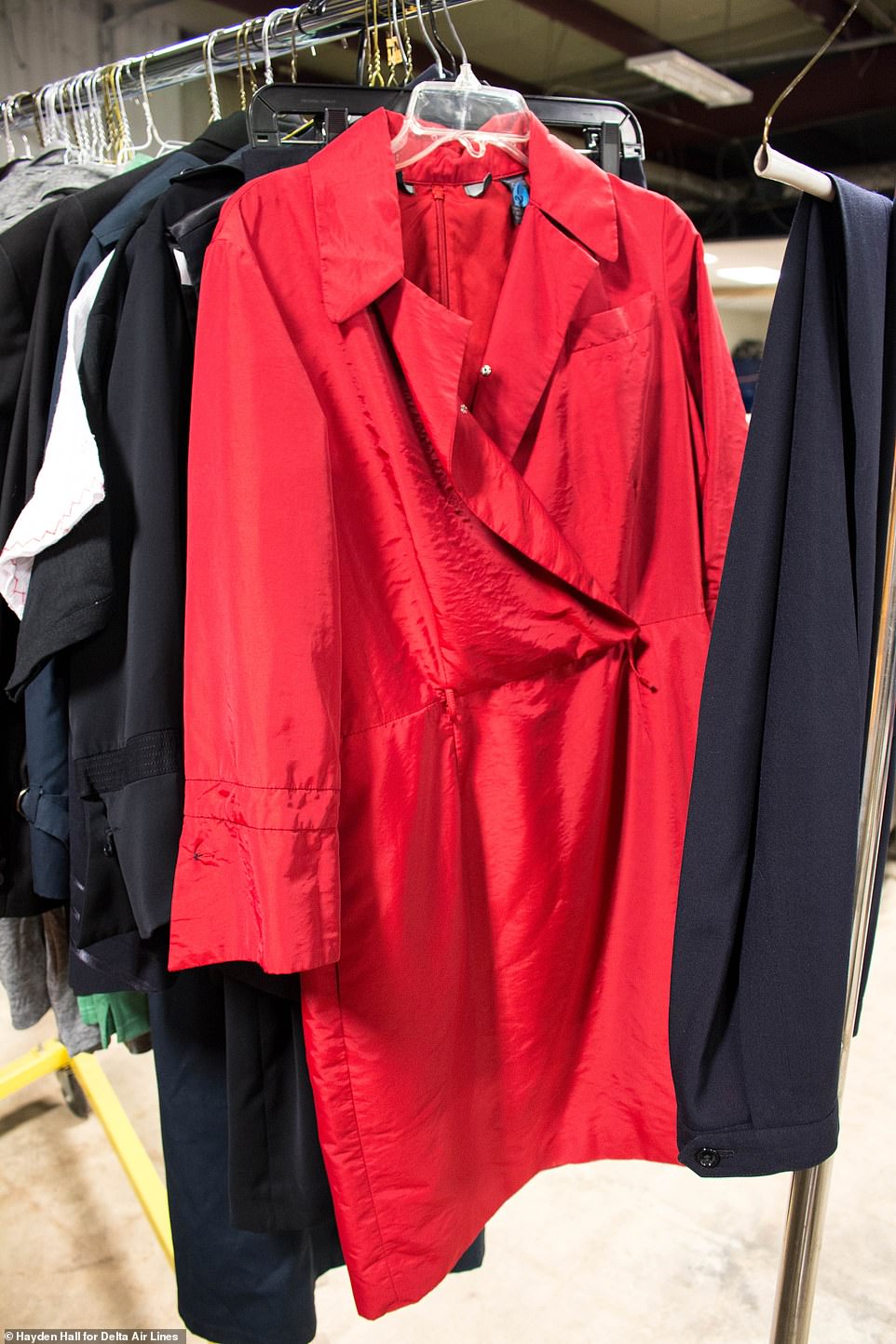 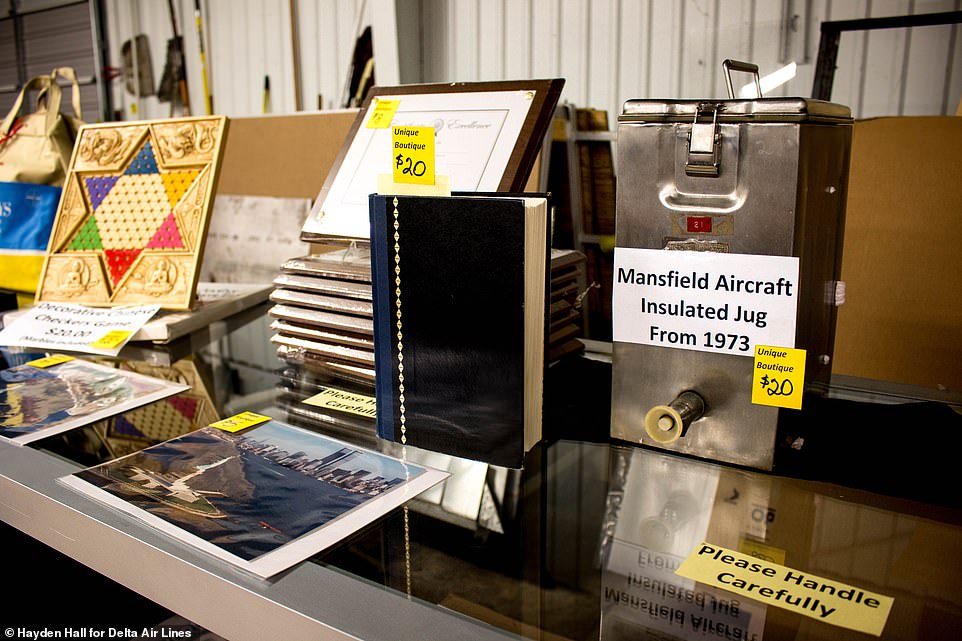 Delta is believed to be the only US airline that gets rid of its surplus inventory in a warehouse sale. It has been doing so for around 20 years 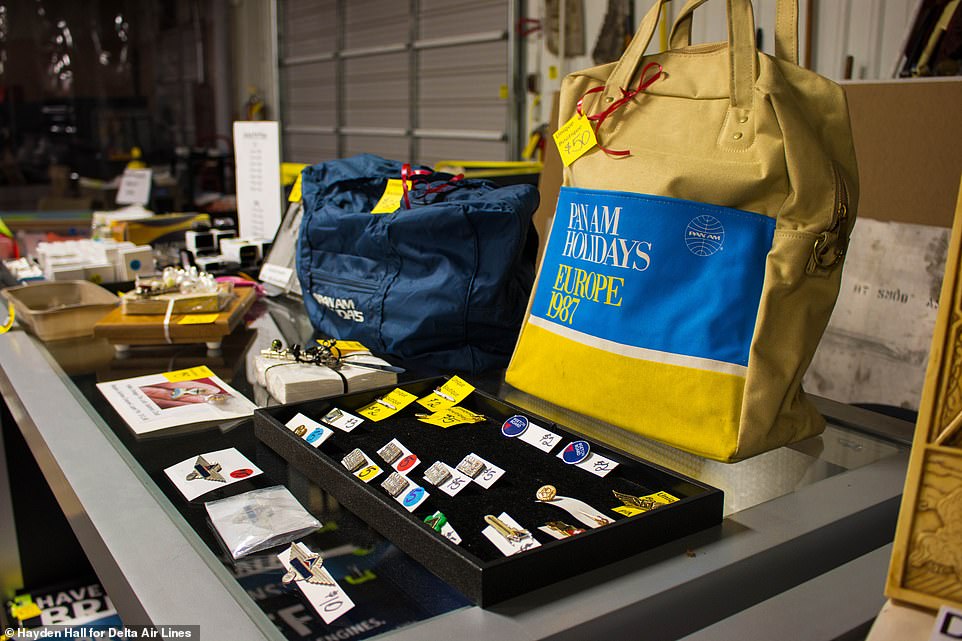 Other items available to snap up at the most recent sale included vintage Pan Am items such as pin badges and bags. Pan Am and Delta merged in 1991 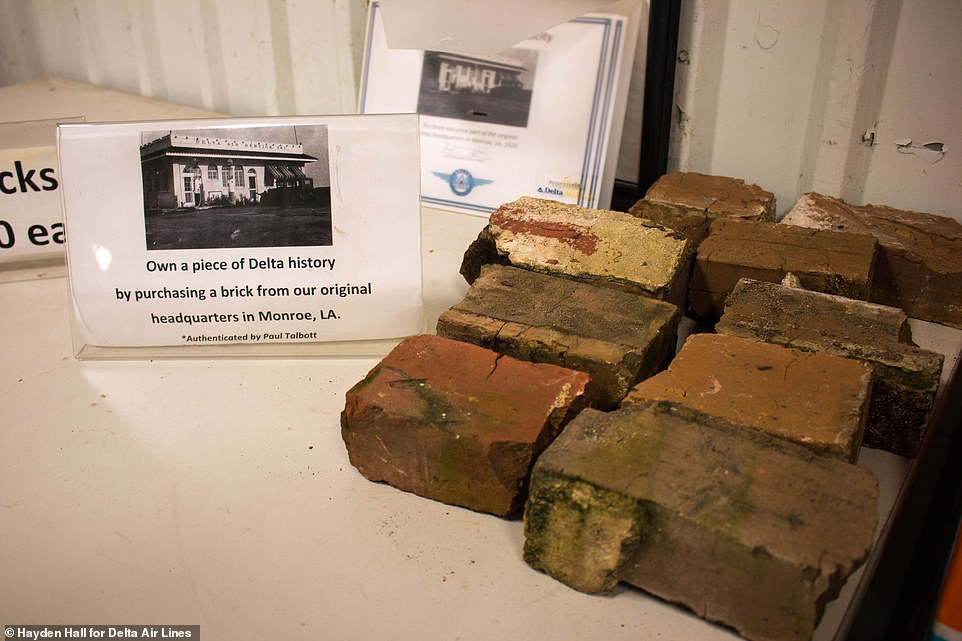 At the last sale visitors could snap up a piece of Delta history – by purchasing a load of bricks from its original headquarters in Monroe, Louisiana

‘Our customers are really creative. They’ll buy the surplus dishes and cutlery for events and we know people use the galley carts as arts and crafts stations or places to keep their tools.’

Delta is believed to be the only US airline that gets rid of its surplus inventory in this way and has been holding the sales for around 20 years.

The Delta Flight Museum is located close to the US carrier’s headquarters at Hartsfield–Jackson Atlanta International Airport.

It describes itself as allowing visitors from around the world to ‘explore aviation history, celebrate the story and people of Delta, and discover the future of flight’.

The next sale will be on Friday, March 8. For more information click here.