EXPRESS INFORMER > News & Politics > Inside Queensland’s most photographed homes in Burleigh Heads back on the market for $3.99 million

The ‘most photographed’ home in Queensland that almost ‘broke the internet’ when it was listed in June is back on the market – and the owners want to flip it for $240,000 more than they paid for it three months ago.

Known as ‘The Palms’, the construction of the four-bedroom mansion attracted an audience on Instagram, as buyers and DIY enthusiasts followed its progress on a 539sqm block in Burleigh Heads, Gold Coast.

The house was said to be the state’s most photographed residential property, after it amassed 27,000 shares on a viral Facebook post and a crowd of more than 500 people packed in to see it sell under the hammer on May 29.

The Palm Springs-inspired property sold for a record-breaking $3.75 million to Jeremy Langston, who lived there with his family for little more than a month before putting it back on the market for offers above $3.99 million.

But with Australian property prices soaring at the fastest pace since the late 1980s, the owners have decided to cash in, as demand surges for coastal homes in regional areas a short drive from a capital city.

The ‘most photographed’ home in Queensland (pictured) that almost ‘broke the internet’ when it was listed in June is back on the market – and the owners want $240,000 more than they paid for it three months ago, as house prices continue to soar 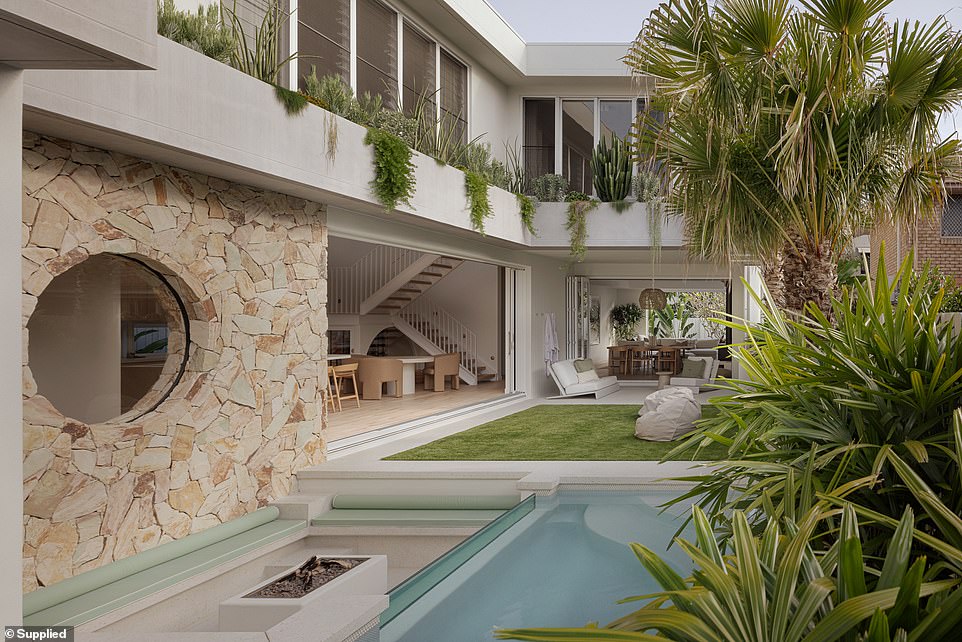 The home (pictured) was said to be the state’s most photographed residential property after it amassed more than 27,000 shares on a viral Facebook post

It is unclear why it has been such a short-lived stay for the Langstons, who are said to have cited ‘family commitments’ as the reason for selling, according to realtor Ed Cherry of Harcourts Coastal.

Less than 24 hours after hitting the market on September 24, Mr Cherry said he was ‘inundated’ with so many calls from agents and clients, that he predicted it would be no problem achieving the asking price.

‘We have already had an offer,’ Mr Cherry told realestate.com.au.

He added: ‘I think Burleigh has proven that properties can achieve that kind of house price growth.’

And it’s the same story across the country. 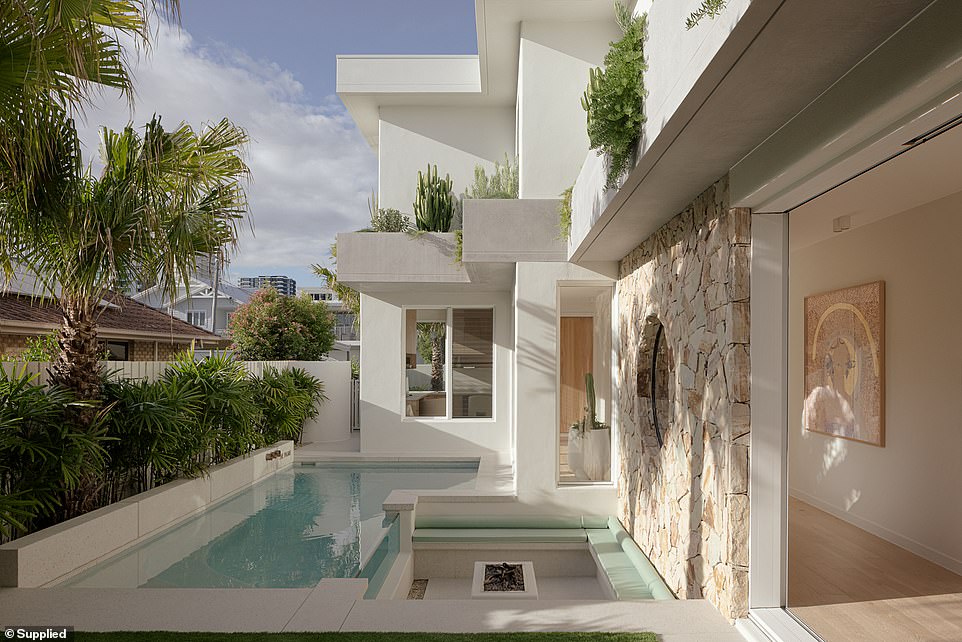 The garden boasts a sunken fireplace, a glass-edged pool (pictured) and an al fresco kitchen

This was even more dramatic than Australia’s 18.4 per annual increase, itself the fastest yearly increase since July 1989 when interest rates were at 17 per cent.

Record-low interest rates and the ability of more professionals to be able to work from home saw house price records set in 88 per cent of Australia’s real estate markets, with regional areas by the coast doing even better than capital cities. 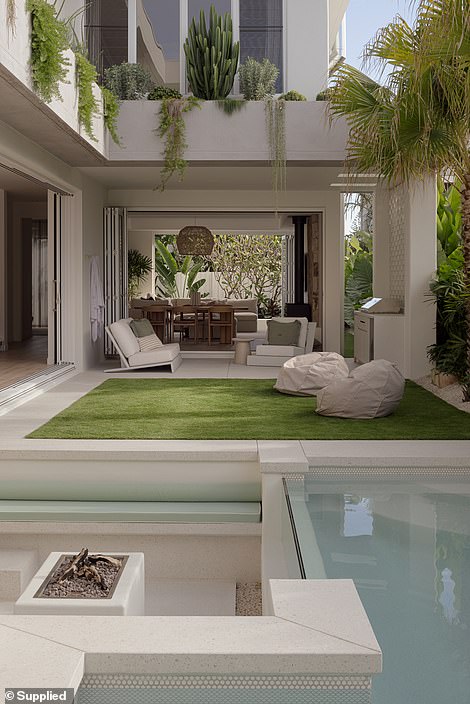 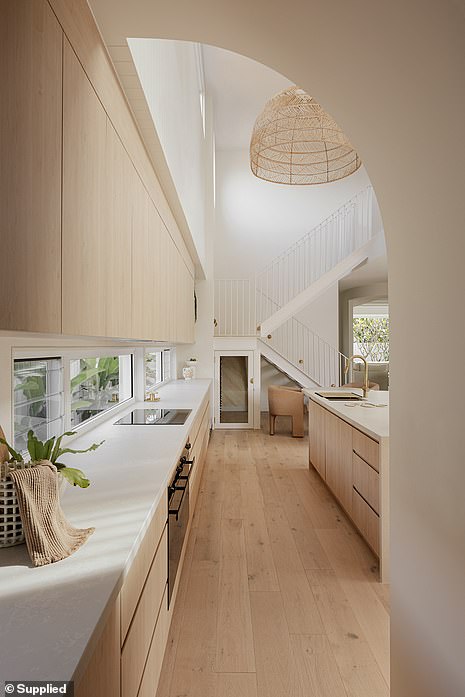 The lavish interior (pictured) is finished in Palm Springs-style, a luxury blend of coastal and desert design inspired by the California city of the same name

Why Australia’s property market has never been hotter

When the pandemic first sent Australia into lockdown in March 2020, it was expected that demand for property would  drop significantly.

The ‘Big Four’ banks warned of an up to 32 per cent crash in housing prices at the time.

Instead, a combination of record-low interest rates, government stimulus programs and pandemic-driven factors such as working from home and the desire for more space, has sent demand for housing to an all-time high.

Figures from the Australian Bureau of Statistics released earlier this month showed in the June quarter, Canberra led the way with growth of 8.2 per cent, followed by Sydney at 8.1 per cent, Hobart at 6.3 per cent, Brisbane at 6.1 per cent, Adelaide at 5.3 per cent, Perth at 4.8 per cent and Darwin at 4.6 per cent. 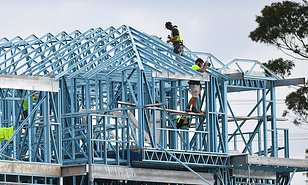 ARE YOU WORRIED ABOUT AUSTRALIA’S BOOMING PROPERTY MARKET?

In August, house prices hit new peaks in 69 of Australia’s 78 property sub-markets based on a grouping of suburbs and towns.

Detached homes with gardens are in particularly high demand, which means the number of them on the market has plummeted.

A study from house price data provider CoreLogic revealed there were 153,803 houses for sale across Australia in August 2018. As of late August 2021, there are just 88,872 houses on the market, a drop of more than 42 per cent.

But finance experts warn prices in suburban areas could crash by 20 per cent while apartment values may plunge by up to a third when the boom inevitably ends.

But if buyer interest in the Burleigh Heads mansion is anything to go by, for now at least, the bubble remains intact. 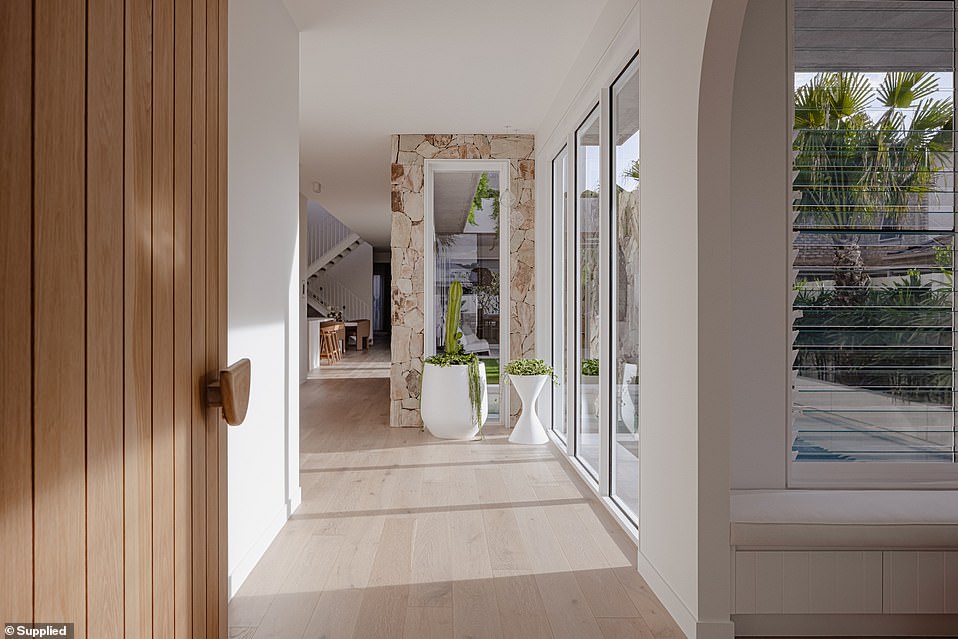 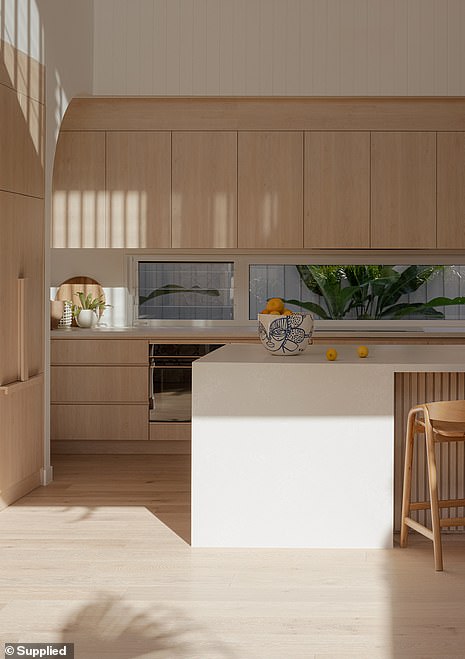 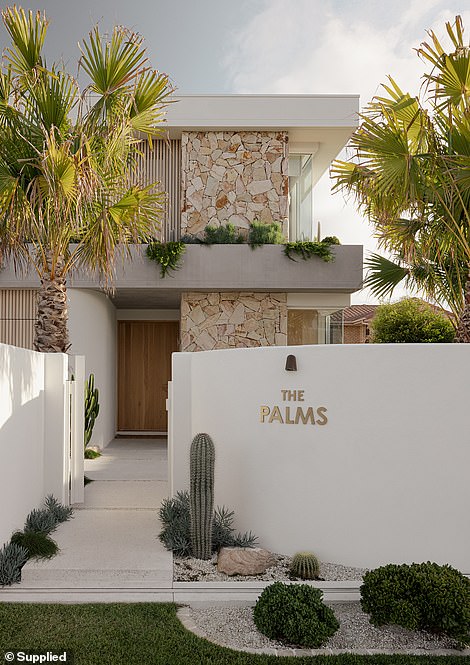 The house (pictured) bears many of the signature hallmarks of Palm Springs-style, including whitewashed breeze blocks which are designed to keep rooms cool in dry desert climates

Designed around a central hub perfect for entertaining guests, the mansion features an open-plan kitchen, living and dining area that flows into an outdoor entertaining area complete with a sunken fireplace, a glass-edged pool and an al fresco kitchen.

The previous owners, who wished to remain anonymous and declined to disclose the total cost of the house, told Daily Mail Australia they decided to sell due to personal reasons.

The lavish interior is finished in Palm Springs-style, a luxury blend of coastal and desert design inspired by the California city of the same name.

Styled by Kira & Kira, a Burleigh Heads furniture business with more than 53,000 followers on Instagram, it bears many of the signature hallmarks of Palm Springs-style including whitewashed breeze blocks, which are designed to keep rooms cool in dry desert climates.

Three-metre high ceilings soar to six metres above the kitchen, making the space feel considerably larger than its true size.

A custom oak staircase leads upstairs which is occupied by three of the four bedrooms which all boast ensuite bathrooms and walk-in wardrobes.

There’s also a wine cellar, a home cinema theatre and enormous windows that capture sweeping views of the surrounding area from almost every room.

Listing agent Conal Martin of Kingfisher Realty, who sold the property to the Langston family, said there is no denying it is ‘pretty special’.

‘As soon as you walk in you are overtaken by a surreal sense of satisfaction and calm. People never want to leave,’ he said in June. 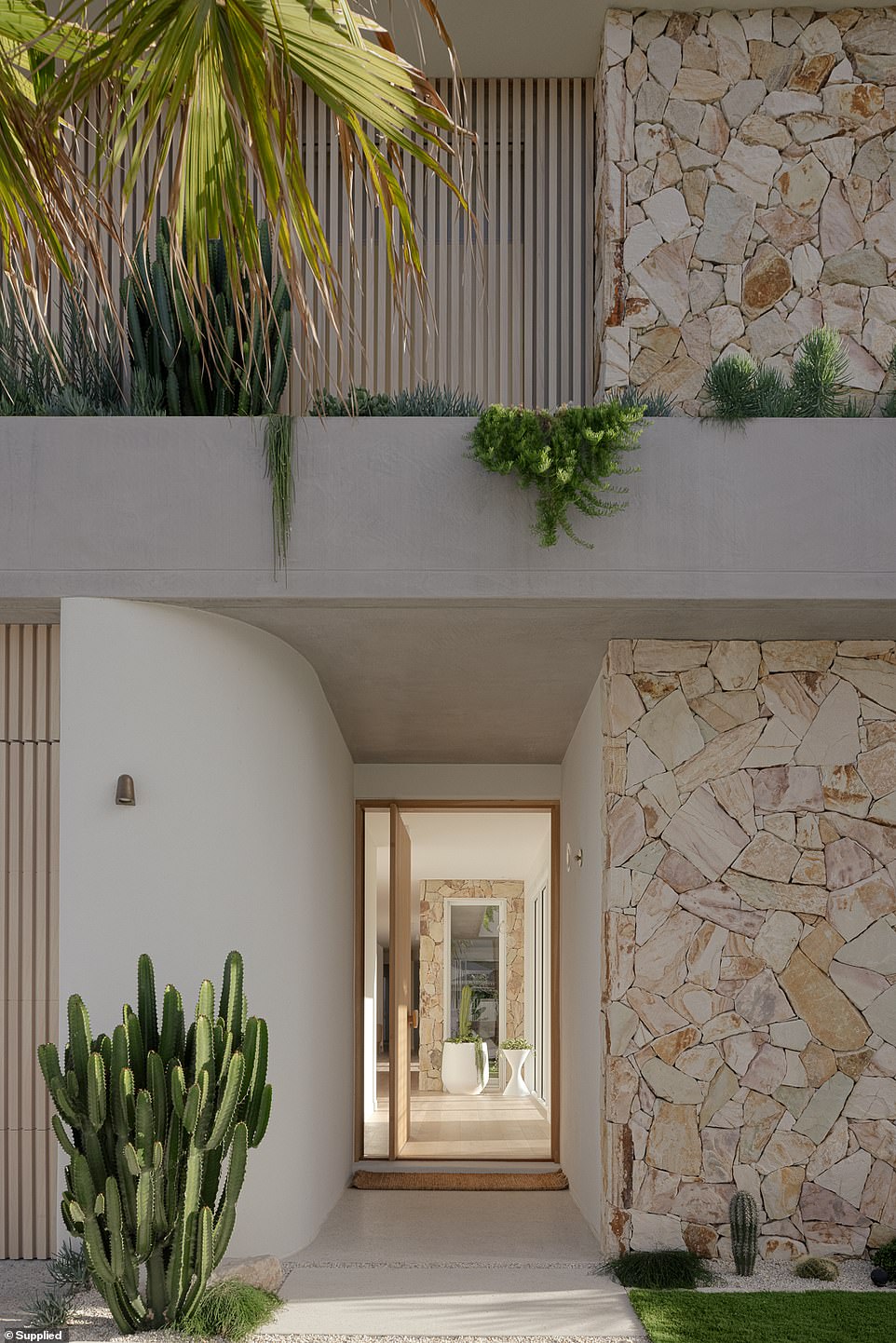 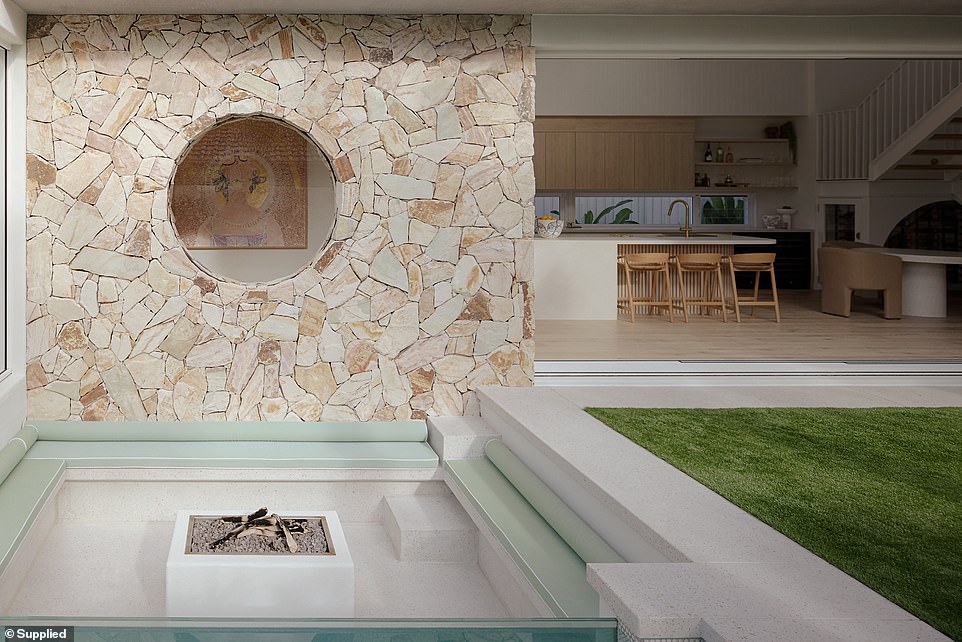 The construction of the mansion attracted a large audience on Instagram, as buyers and DIY enthusiasts followed its progress

Photos of the house have drawn stunned responses on social media, with many saying they would live there in a heartbeat.

‘Houses have certainly changed since I was hanging out in this area! Beautiful,’ one woman wrote.

‘Now that’s an exception to not wanting a flash place! I could live there,’ said another.