Inside the incredible ‘five-star hotel’ for HORSES, where the animals enjoy hypoallergenic bedding, marble stables, swims and hot tub sessions in a life of million-dollar luxury

These are some of the luxuries afforded to the horses at the incredible Al Shaqab ‘five-star hotel for horses’ in Doha, Qatar.

British travel photographer Simon Urwin, from Dorchester, was allowed inside the elite equestrian centre to photograph it – and he was bowled over by the facility, which is home to some 700 horses, from newborn foals to world champions.

He said: ‘[It has] incredibly high standards in terms of horse breeding and welfare. And it’s one of the most spectacular sporting venues anywhere in the world – and the horses live a life of million-dollar luxury.

‘The list of luxuries is endless – they get new shoes every six weeks, their food (hay) gets shipped in from Australia, and their hypoallergenic bedding gets sent all the way from the Netherlands.’

And how much does it cost to stable a horse there? It would be insulting to ask, apparently… Scroll down to see Simon’s beautiful photographs of the state-of-the-art ‘resort’.

This swimming pool, shaped like a lazy river, is used to help build muscle strength in the horses who are natural swimmers. On-site, the animals also have access to a state-of-the-art hospital and a team of vets 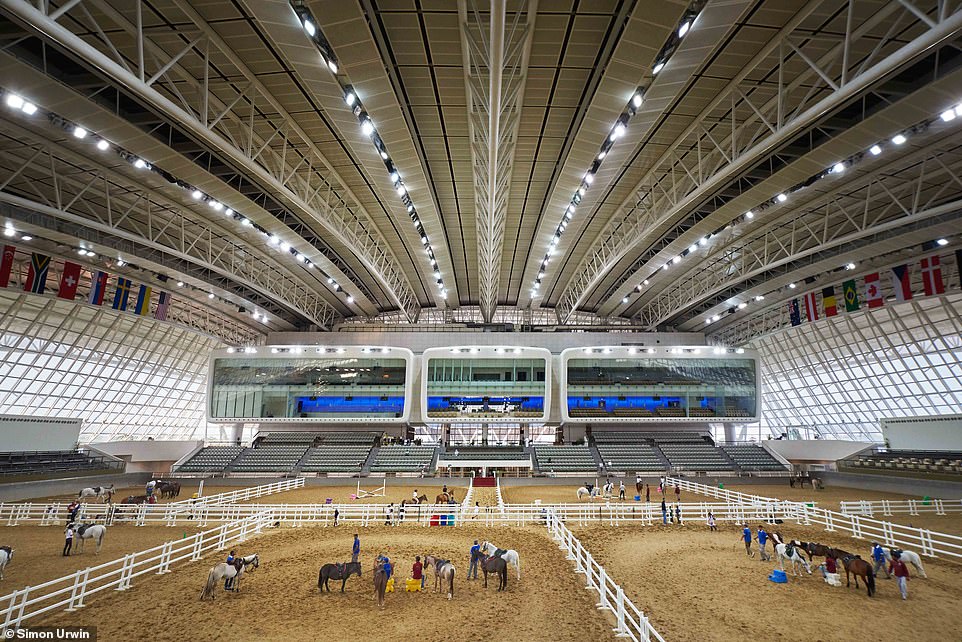 The indoor performance arena, which seats 6,000, is where some of the biggest competitions in the global equestrian calendar take place 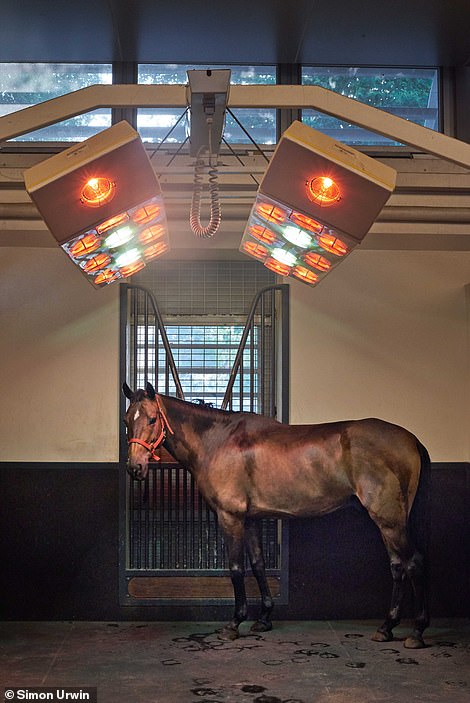 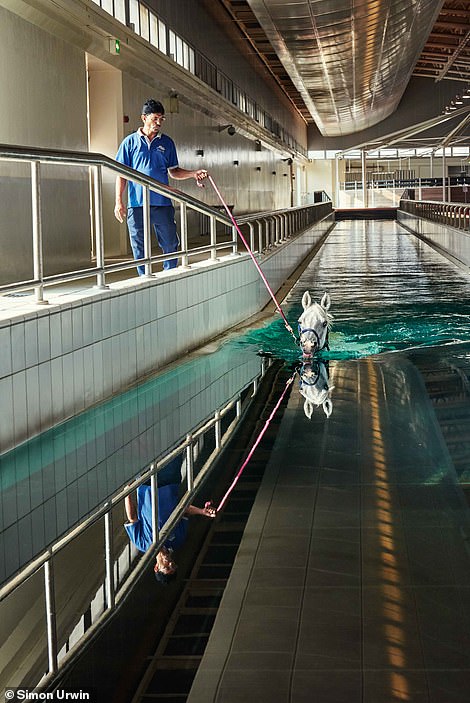 On the left is a horse drying off under a special heat lamp after a dip in one of the swimming pools. There are two swimming pools which are used for endurance and conditioning. The horses receive regular massages, an osteopath visits them once a month, and they are fitted with new shoes every six weeks 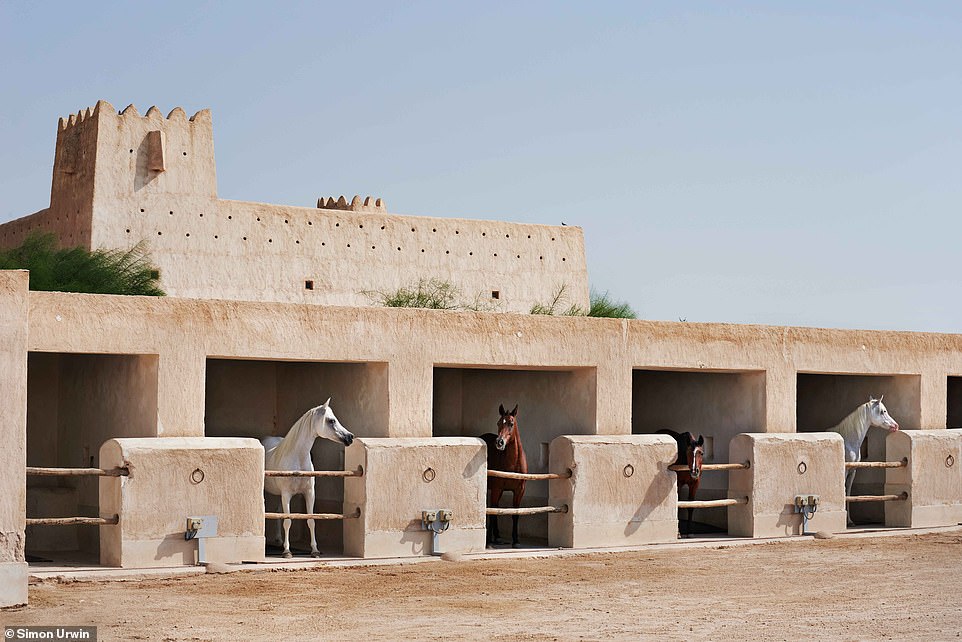 The old Ottoman stables are used during the cooler winter months. Horses sleep on hypoallergenic woodchip bedding that is shipped in from the Netherlands, and they are fed on hay that comes all the way from the USA and Australia 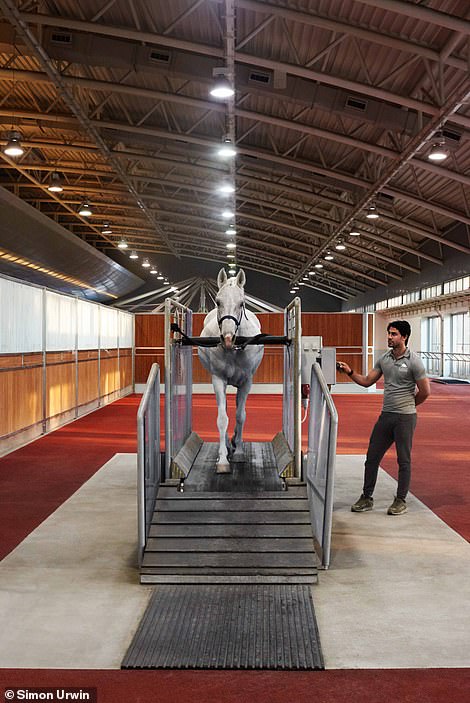 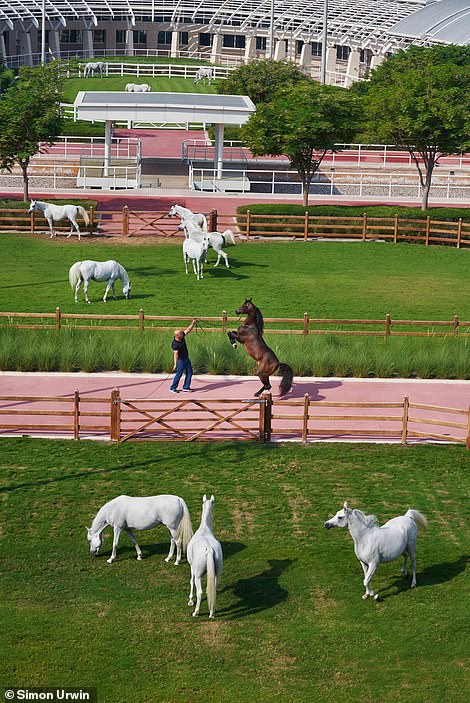 Al Shaqab’s horses are treated like Olympians. Each animal has its own training plan and they are exercised twice daily, including on special treadmills (left). Centuries before the discovery of oil and natural gas turned Qatar into one of the wealthiest countries on earth, the Gulf nation was known for its prized Arabian horses 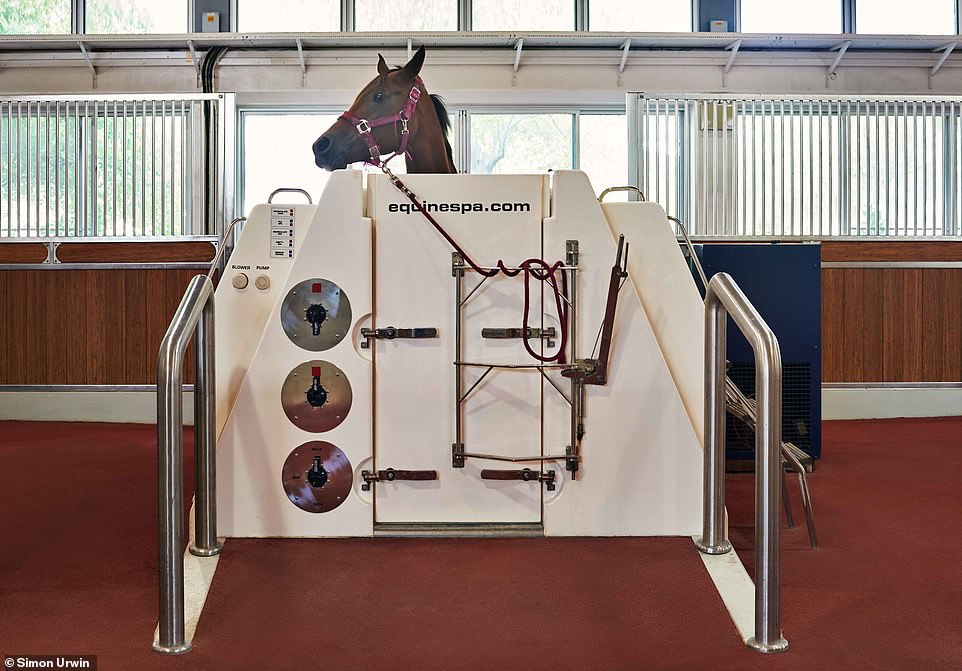 Soothing: A horse enjoys an equine hot tub after some exercise 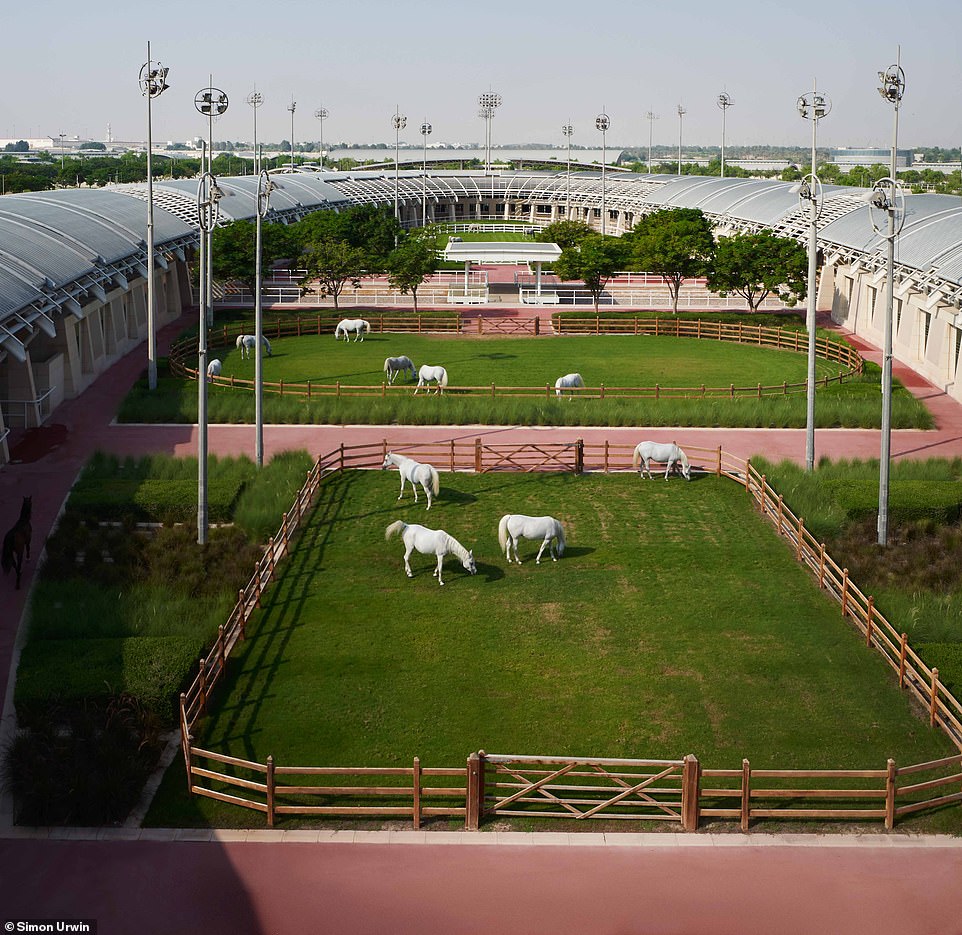 Horses in the paddocks inside His Highness the Emir’s Stables, which are made of marble and stainless steel, and are specially air-conditioned to cope with the fierce desert heat 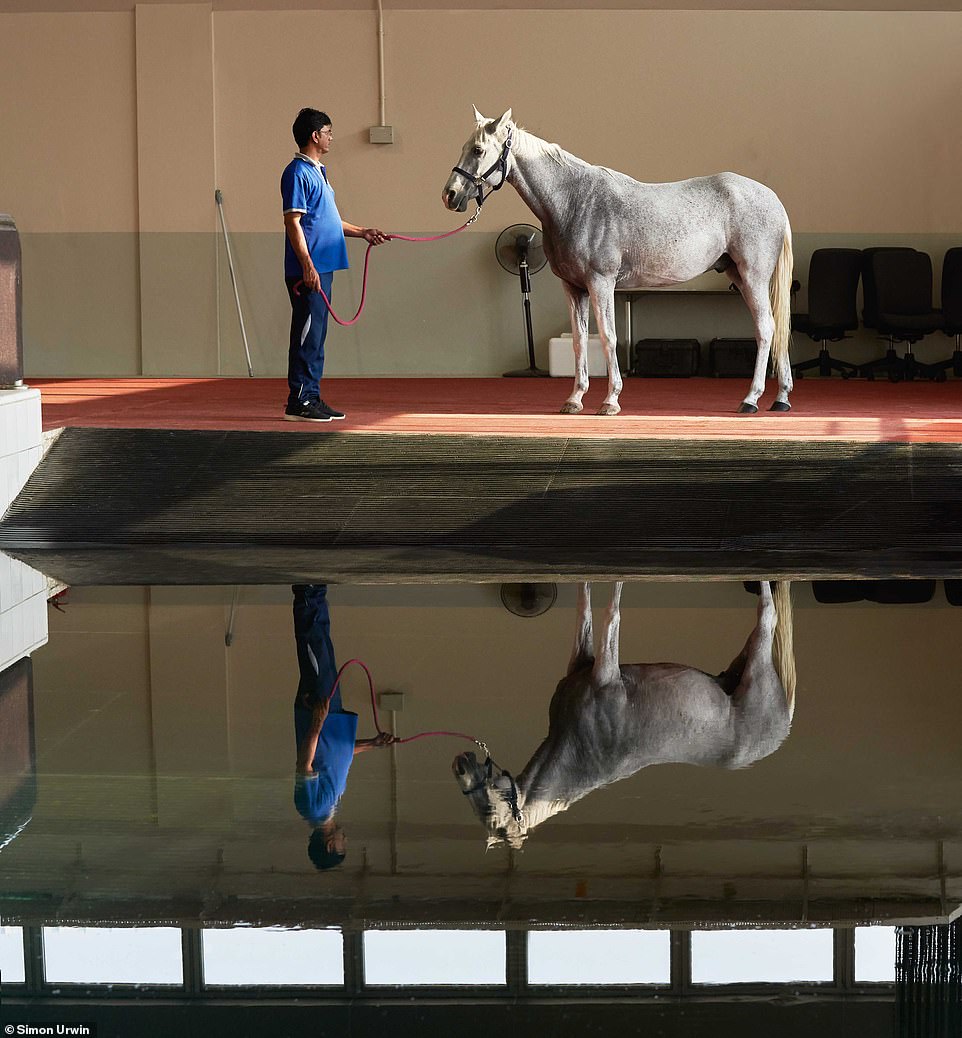 ‘You could say Al Shaqab is like a palace, and we attend to the horses as if they were kings and queens,’ says Jabir Ali (pictured), one of Al Shaqab’s groomsmen, who has worked at the facility for over 25 years 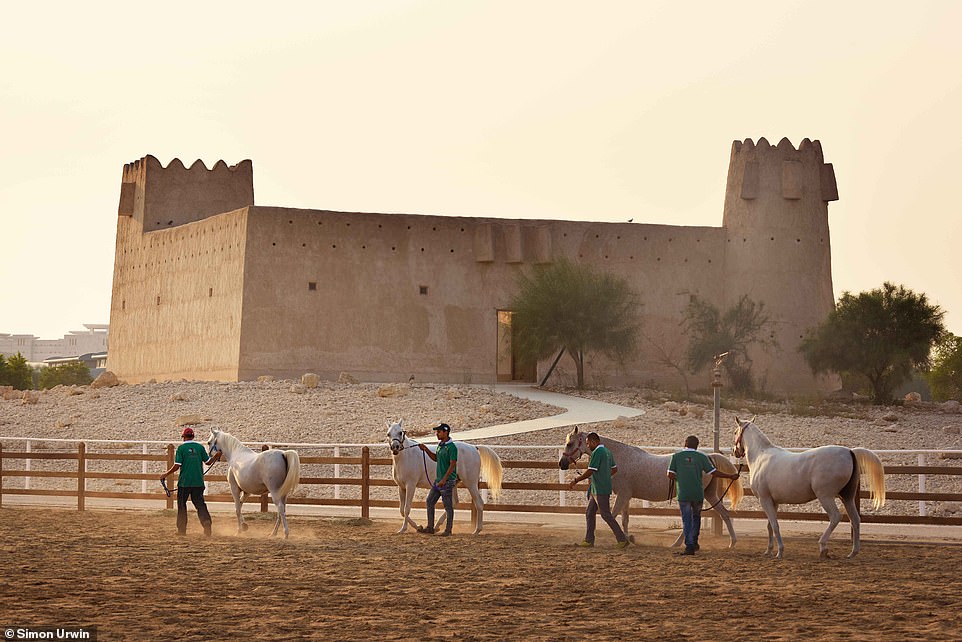 The five-star centre is built in the shape of a horseshoe around an old Ottoman stable and fort, and covers nearly a million square metres (10,763,910 square feet) 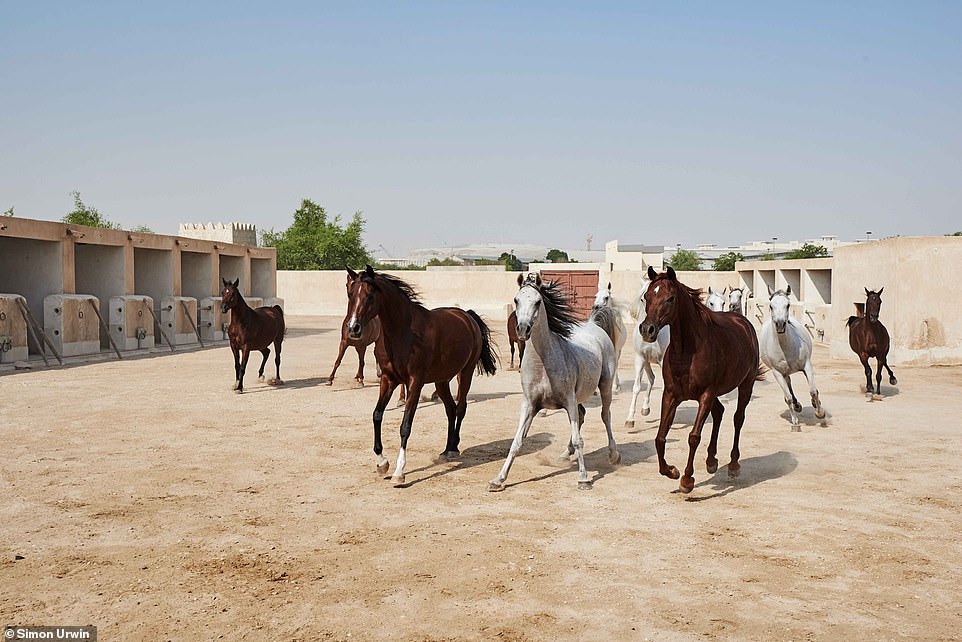 Al Shaqab’s horses are bred and raised for showing, eventing, and endurance racing 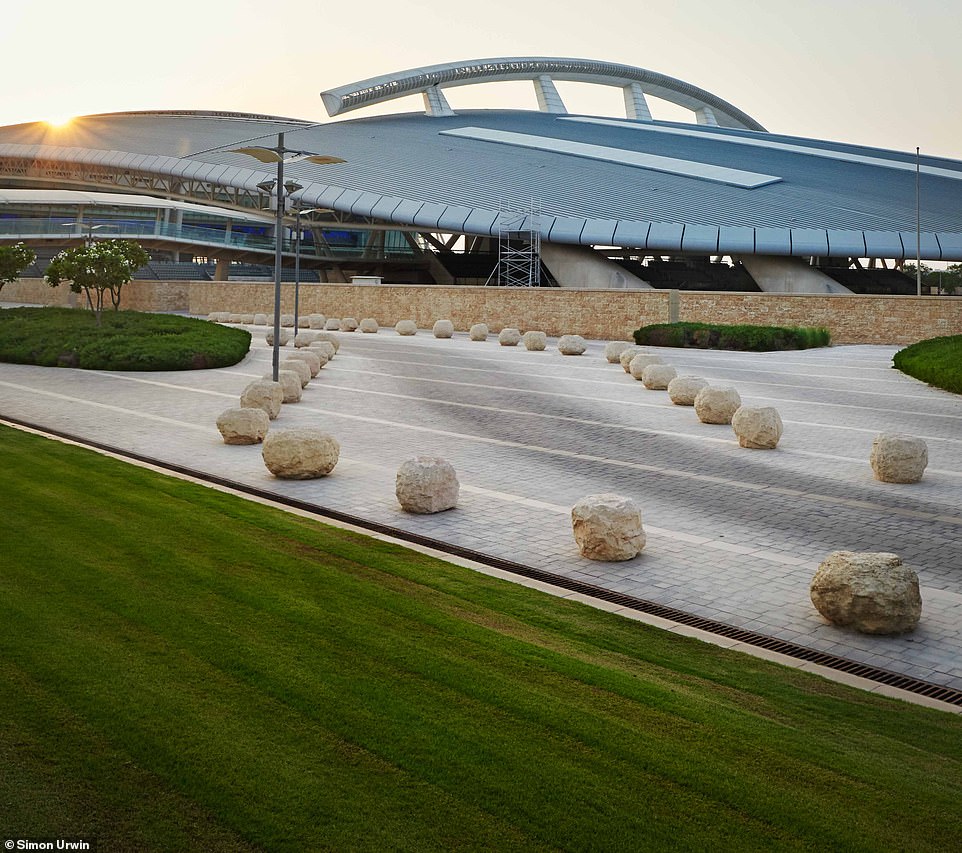 The grand public entrance to Al Shaqab. The centre has a riding school and instruction is available for all skill levels starting with students who are at least six years old. Visitors can book special guided tours of the facility for free