The Duchess of Sussex allowed royal fans an intimate glimpse inside their $14 million home in Montecito, California she shares with Prince Harry, three-year-old Archie and one-year-old Lilibet in a new interview.

Meghan Markle, 41, posed for a photoshoot in the garden of her home on the San Ysidro Ranch after sitting down to speak to Variety Magazine in her first interview since Queen Elizabeth II passed away.

She also spoke on camera to answer some of the questions, with footage also showing the Duchess posing in her lush green garden in front of bushes sprouting purple flowers.

The Duchess of Sussex, 41, chatted to Variety Magazine from the £12.2million home she shares with Prince Harry and gave royal fans a glimpse into their interior design style 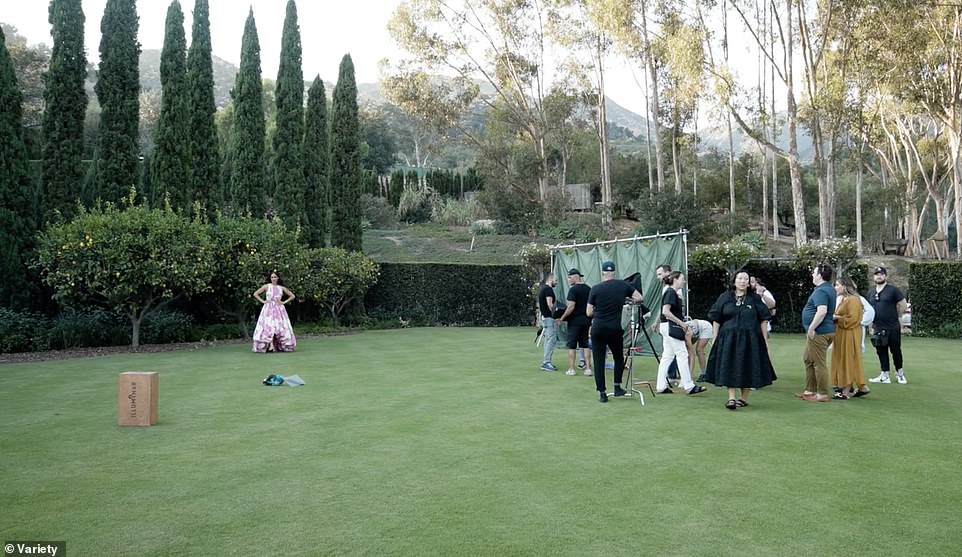 In a zoomed out shot of Meghan’s garden, royal fans could see the hedges that surround the land, with a stunning mountainous background, while the Duchess posed in front of lush Sicilian lemon trees

A zoomed out shot of Harry and Meghan’s garden showed the Duchess posing in front of two lush Sicilian lemon trees which were ripe with yellow citrus fruit, ready to be picked.

The trees stood in front of high, well-trimmed dark green hedges which surrounded the garden like a fortress, providing privacy for the couple and their young children.

Royal fans also got to see the view Harry and Meghan look out on every day – with lots of woodland and mountains on the horizon.

Inside the house, Meghan sat on a simple black chair and dressed in a chic black blouse as she chatted to the magazine.

With her thick, dark hair down and in curls and accessorising with a touch of gold jewellery, she looked relaxed as she talked about her loves – including the rom-com When Harry Met Sally – and how she hoped to make a difference in the world.

Meghan sat in front of traditional French doors which led out onto a patio with a table and chairs, which allowed the room to be flooded with natural light. 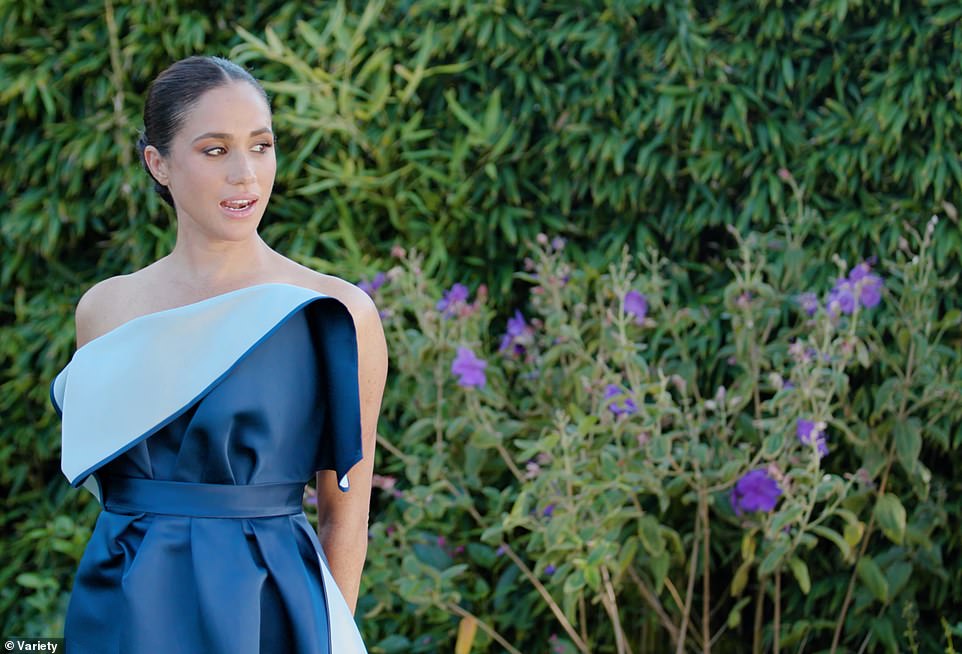 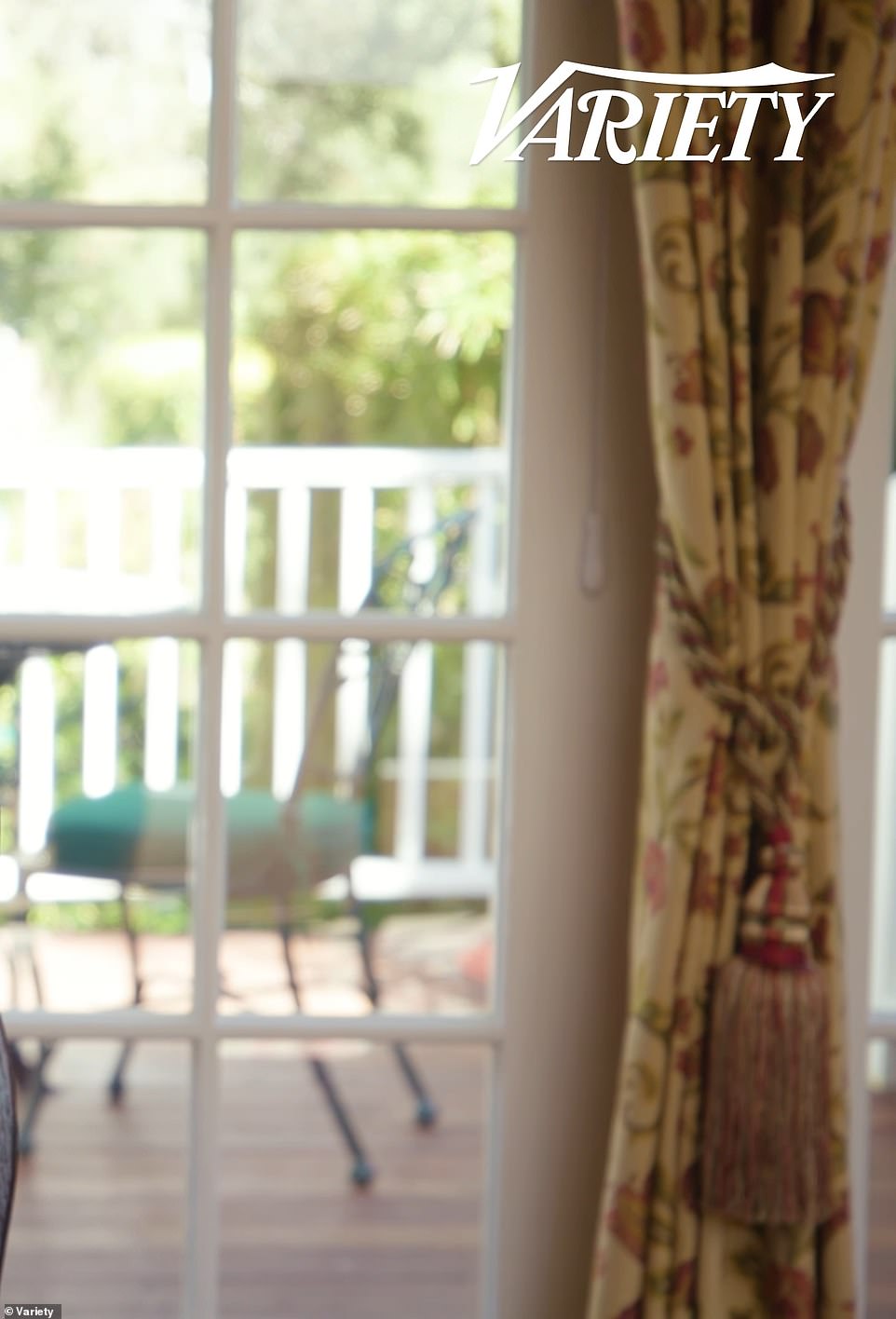 Royal fans were able to see the traditional French doors which opened out onto a decked patio are complete with a table and chairs. The windoes were dressed with plush gold curtains embroidered with a burgundy and green floral pattern 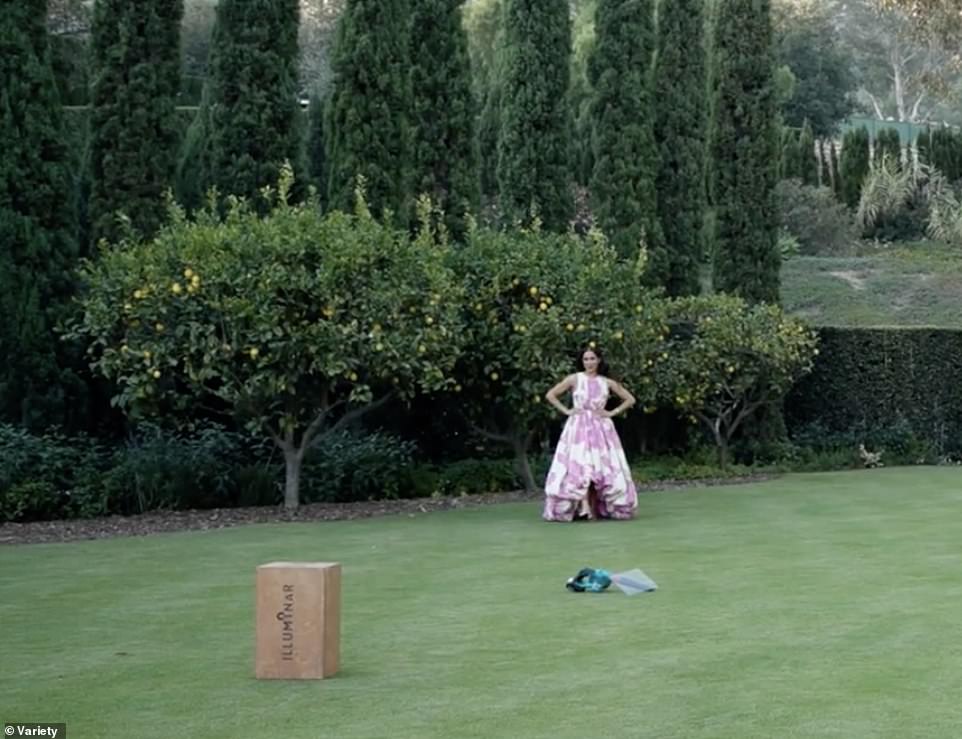 The Duchess posed in front of well-kept, lush Sicilian lemon trees which were dotted with yellow citrus fruit that looked just ready to be picked 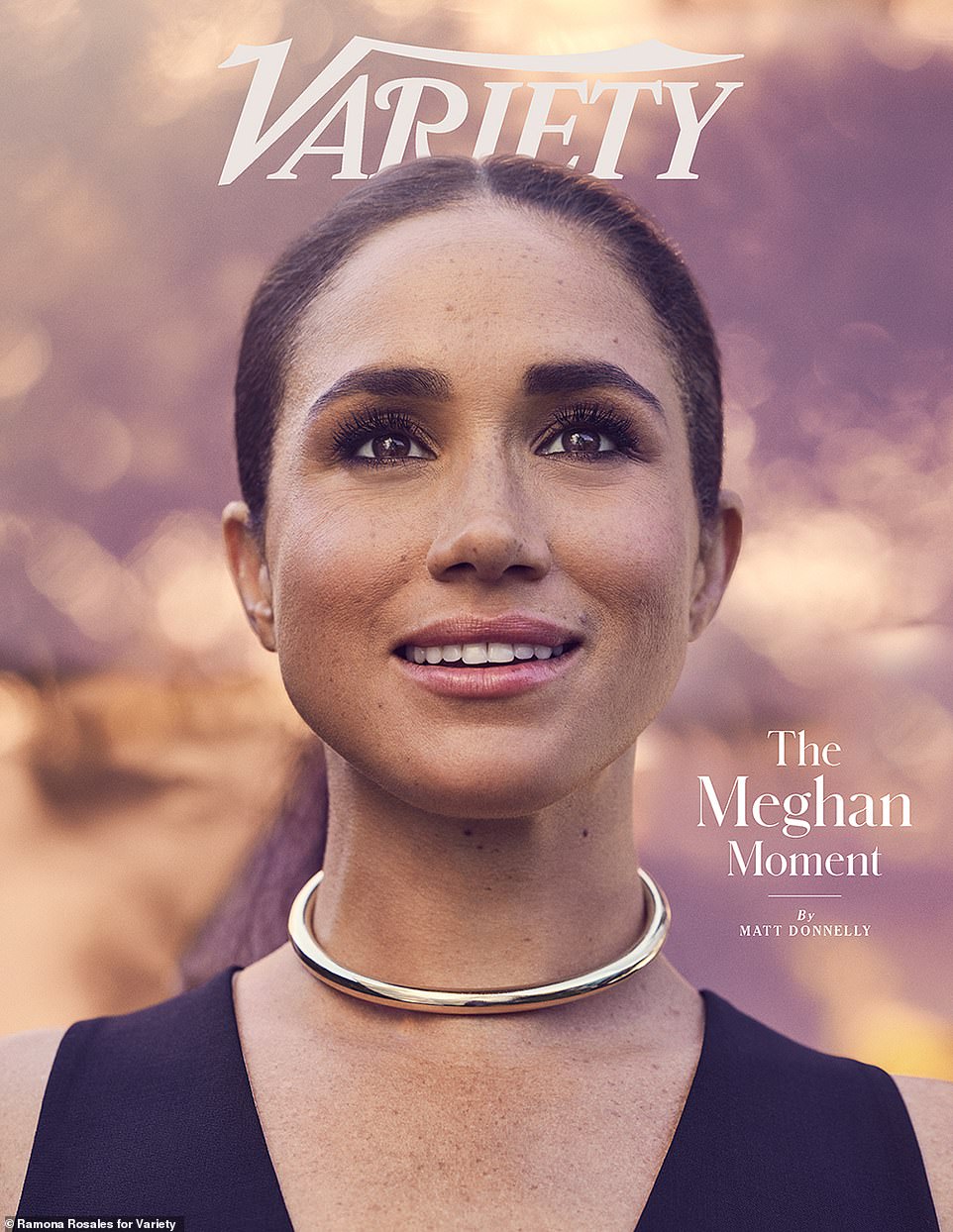 Meghan spoke to Variety magazine about her relationship with the Queen, as well as revealing her daily family life in Montecito, California

Eagle-eyed fans may also have been drawn to the plush curtains dressing the French doors, which were gold and intricately embroidered with burgundy and green floral patterns.

During the interview, the Duchess of Sussex revealed what family life is like in their Montecito home.

As had previously been shared by Harry and Meghan during her interview with The Cut in August, the Duchess mentioned that she shares an office with her husband while they work on projects as part of the Archewell Foundation – adding they were just like any other family post-pandemic, carrying out much of their work from home.

Meghan said: ‘It allows us to have significant time with our kids at this really special moment in their lives. We’ll never get this time back.’

She added a typical day will see her making breakast for Archie and Lilibet before she and Harry join Zoom calls together.

However, she added the couple try to divide their time as well, so they can get more work done.

The San Ysidro Ranch, where the house is located, is described as: ‘A low-key old luxury resort with simple bungalows tucked into a mountainside overlooking the Pacific coast.’

It is also described as ‘unpretentious’ despite largely being occupied by wealthy people.

The Duke and Duchess of Sussex first moved to the US in 2020, shortly before the Covid pandemic, after they stepped down as senior members of the royal family.

The move sparked rumours of a rift between the couple and the rest of The Firm, which has rumbled on for more than two years.

However, royal fans were hopeful of signs a reconciliation may be on the cards after the Queen’s death on 8 September, when the Duke and Duchess were in the UK on a royal visit.

Two days after Her Majesty passed away, Harry and Meghan joined the Prince and Princess of Wales in Windsor (they had been staying at Frogmore Cottage on the Estate) to meet well-wishers and read tributes that had been laid for the late monarch.

A few days before the Queen’s funeral, when she was lying in state at Westminster Hall, King Charles also granted his youngest son permission to wear his military uniform to take part in a Vigil of Princes with the Queen’s other grandchildren, where they stood guard over her coffin.

Meghan addressed the Queen’s death in her interview, and said she was ‘grateful’ to have known the monarch, with whom she shared a ‘warmth’.