A thrilling win to Pakistan in a T20 international against Afghanistan has been overshadowed by fans ripping up stadium seats and throwing them at opposition supporters in wild scenes.

Videos went viral after the match at the Asian Cup match at Sharjah Cricket Stadium in the United Arab Emirates; with furious Afghanistan fans seen ripping up seats and launching them through the air.

A fan could be seen hitting a man wearing a Pakistani shirt over the head with a seat he had wrenched from the grandstand in one of two astounding videos showing chairs flying into the crowd and open thuggery.

Pakistan great Shoaib Akhtar could not believe what he was seeing, and called on Afghanistan supporters and board members to stamp out the horrific behaviour.

‘This is what Afghan fans are doing. This is what they’ve done in the past multiple times,’ he wrote on Twitter.

‘This is a game, and it’s supposed to be played and taken in the right spirit.

‘Your crowd and your players both need to learn a few things if you guys want to grow in the sport.’

A prominent Pakistani fan echoed Akhtar’s sentiments, saying they needed to grow up.

‘Some of these Afghan kids really need to learn how to behave. This is an international match, not gully cricket. Never happens in any other matches. That’s the reason I really respect the other cricket teams,’ he wrote.

The crazy scenes followed an ugly exchange between Afghan bowler Fareed Ahmed and Pakistani batter Asif Ali in the penultimate over of the match. 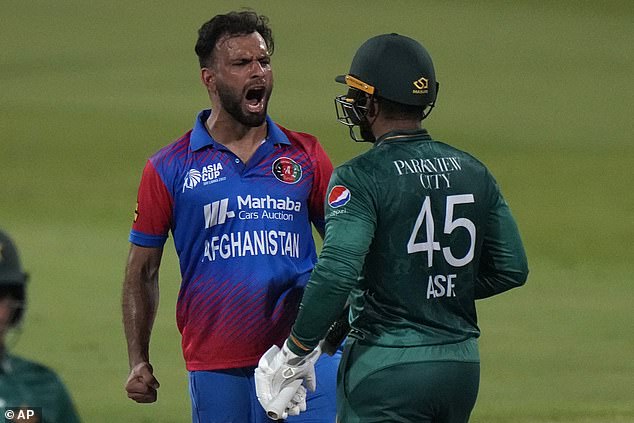 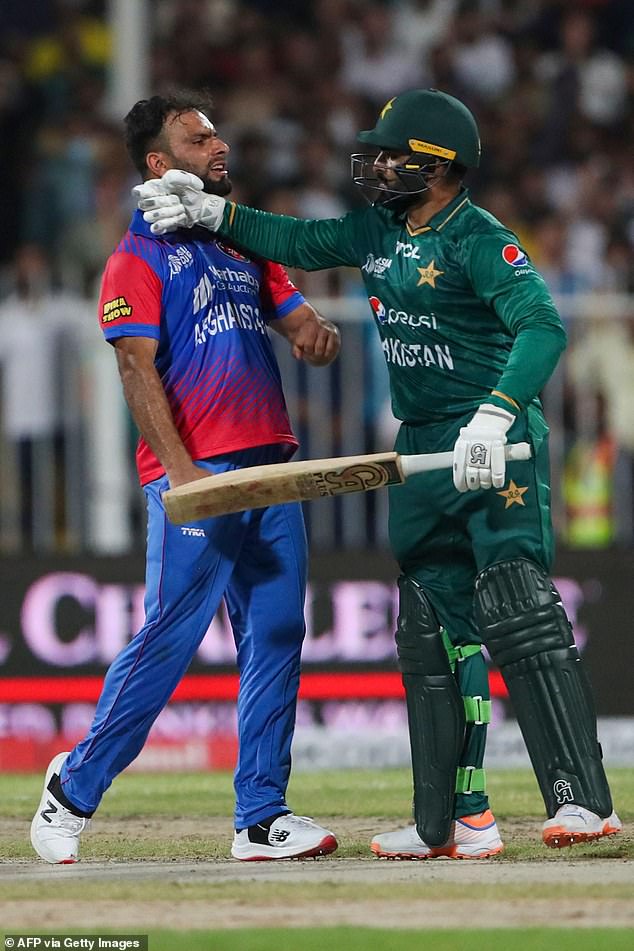 Ali confronted Ahmed after the Afghan bowler celebrated in his face, pushing him in the chest

Tempers flared toward the end when Ahmed reduced Pakistan to 118-9 in the 19th over by having Ali (16) dismissed.

Ahmed clearly celebrated a little too hard for Ali’s liking, with the Pakistani middle-order batter furiously pushing him hard in the chest as Ahmed got right up into his face.

The quick then followed Ali, who raised his bat and threatened to clobber Ahmed with it before Afghanistan players and umpires rushed in to separate the pair.

‘This is stupidity at (an) extreme level by Asif Ali and should be ban from the rest of the tournament, any bowler has the right to celebrate but being physical is not acceptable at all,’ he wrote on Twitter.

In fact, bowlers do not have the right to celebrate in a unsportsmanlike or disrespectful manner, according to the game’s laws. 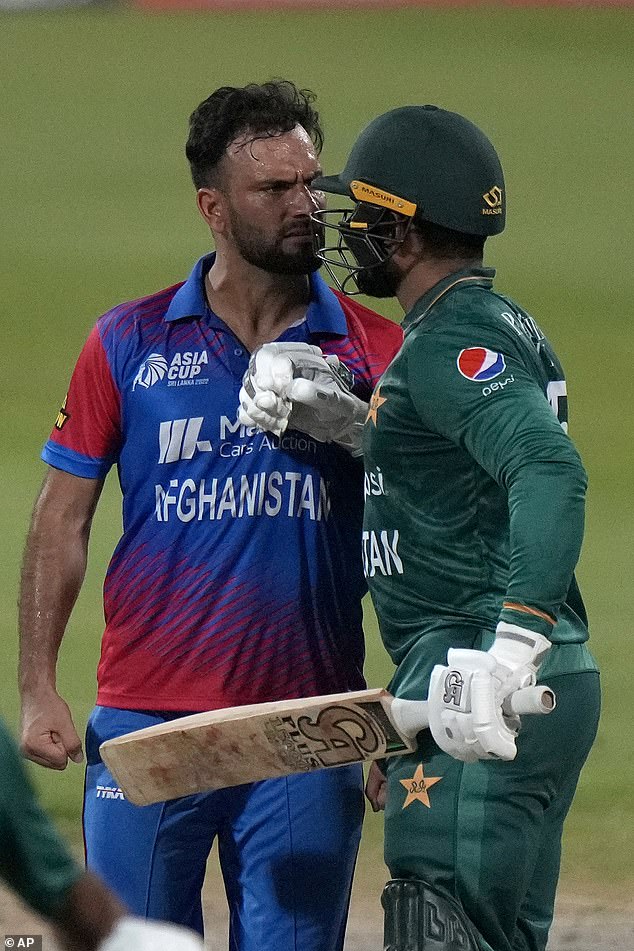 Afghanistan’s Fareed Ahmad, left, and Pakistan’s Asif Ali, right, come to blows before being separated by Afghan players and the two umpires

As such, both players are expected to draw Code of Conduct demerit points for the fiery encounter.

Stanikzai also defended the war-torn nation’s supporters after their violent ending to the game, claiming the team’s ‘motive (has) always been to spread love, that’s why our team earned respect worldwide’.

‘You can’t control the emotions of the crowd and such incidents (have) happened in the world of cricket multiple (times),’ he wrote in a separate Twitter post, before referencing times supporters had treated Pakistan players with respect.

This is stupidity at extreme level by Asif Ali and should be ban from the rest of the tournament, any bowler has the right to celebrate but being physical is not acceptable at all https://t.co/ebnqSaRRmD

The tense ending – both on and off the field – followed a superb match.

Needing 11 off the last over and with only one wicket in hand, the 19-year-old Shah clobbered consecutive sixes off fast bowler Fazalhaq Farooqi’s two low full tosses to take Pakistan to 131 in reply to Afghanistan’s 6-129.

A jubilant Shah threw away his helmet and batting gloves while sprinting toward the dressing room once his last hit sailed over long off, and his teammates also rushed onto the field to celebrate the breathtaking win. 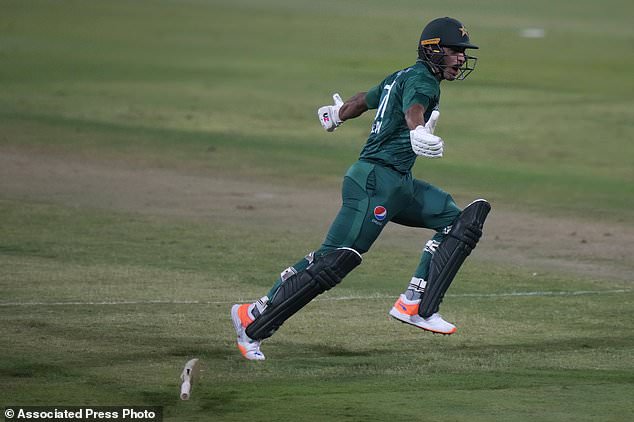 ‘To be honest, it was quite a tensed environment in the dressing room,’ Pakistan skipper Babar Azam said after Shah’s heroics.

‘I was in the dressing room … I thought it is cricket and I have seen Naseem bat like this, so I had a little bit of belief.’

Farooqi had put Pakistan on the backfoot when he trapped Babar leg before wicket for a golden duck and then struck twice in his penultimate over before bowling two full tosses to Shah in the last over to end up with 3-34. 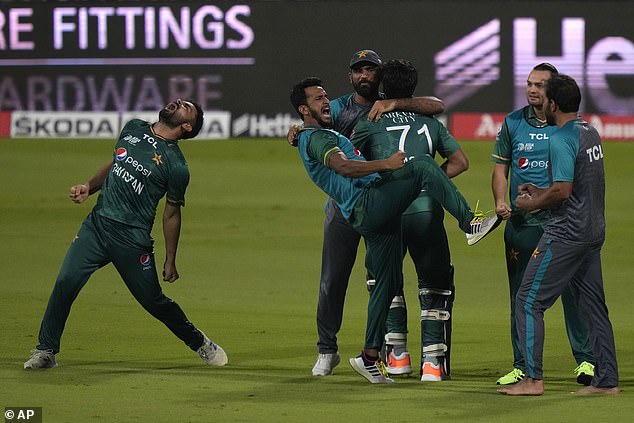 BBL cult hero Rashid Khan (2-25) had newly crowned No. 1 T20 batter in the world, Mohammad Rizwan, LBW before Shadab Khan (36) and Iftikhar Ahmed (30) steadied the chase with a 42-run partnership.

But Afghanistan didn’t give up in the death overs and claimed six quick wickets once Fareed Khan (3-31), playing his first game in the tournament, had Iftikhar caught deep midwicket in the 16th over. 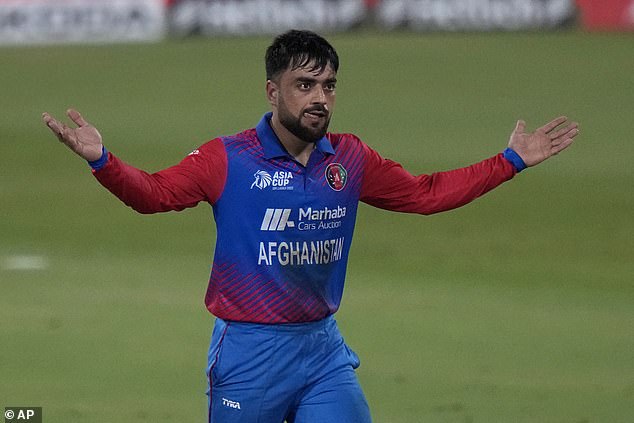 Shadab also went down in the next over as he top edged Rashid to backward point after hitting the leg-spinner for a six, but couldn´t resist going for another big hit – before Shah’s heroics secured the win.