Dutch bank ING has said a slower interest rate hiking cycle could lead to higher base rates for longer, after the Bank of England tempered expectations last week.

The BoE last week joined the Federal Reserve and European Central Bank in hiking its base rate by a hefty 75 basis points but, like its counterparts a week earlier, indicated that future hikes would be smaller and the base rate will likely peak lower than current market expectations.

ING said in a research note on Tuesday this change of approach could mean the base rate stays ‘higher for longer’, but that there would also be ‘less risk of an economic, or financial, accident’.

BoE chief economist Huw Pill: The bank has not ‘declared victory against second round effects’ of inflation

By lifting the base rate to 3 per cent last week the BoE’s Monetary Policy Committee eased expectations of future hikes, pulling market forecasts on the base rate peak to around 4.5 per cent from as high as 5.25 per cent previously.

Similarly, chairman Jerome Powell suggested at the time of the Fed’s latest hike that the pace of interest increases may slow in the face of a looming recession.

Meanwhile, markets interpreted ECB President Christine Lagarde’s comments that a ‘substantial’ part of policy tightening is already done as an indication European rates may not peak as high as expected.

But analysts at ING warned against expectations of lower overall rates, adding that a slower hiking cycle ‘could mean higher rates for longer’.

They said: ‘What was widely described as a ‘pivot’ was in fact a signal that what we would describe as the ‘catching up’ phase of this cycle is near its end. 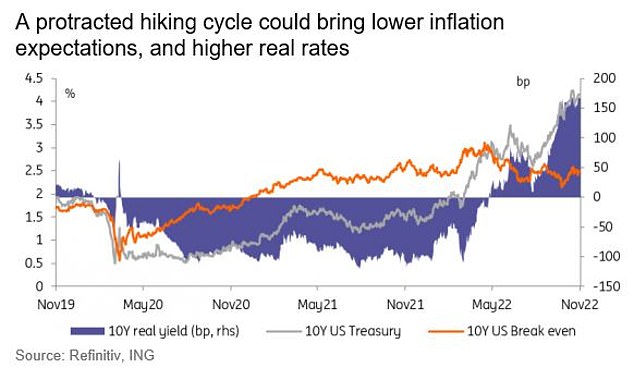 Analysts at ING warned against expectations of lower overall rates, adding that a slower base rate hiking cycle ‘could mean higher rates for longer’ 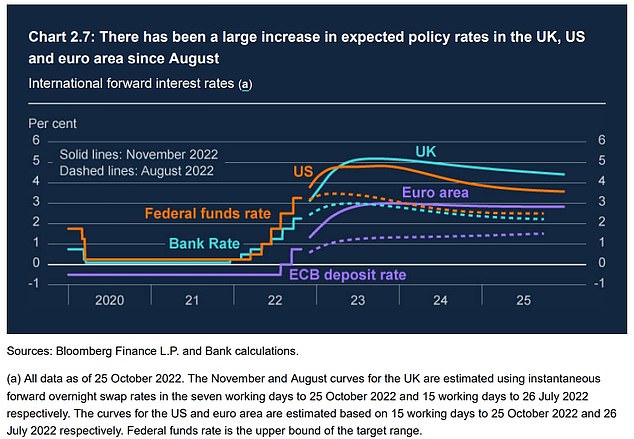 Tempered: The Bank of England report was based on market forecasts for rates on 25 October, but boss Andrew Bailey flagged last week that expectations had declined since then – base rate is now expected to peak below rather than above 5 per cent

‘During the ‘catching up’ phase, central banks were pretty much on autopilot, hiking in large (up to 75bps) increments as they exited years, or even decades in the case of the European Central Bank, of very loose policy.

‘The new phase promises slower hikes, and more attention being paid to the side effects of tightening. As Fed chair Powell was at pains to stress, this doesn’t necessarily mean a lower terminal rate.’

The BoE’s chief economist Huw Pill warned in a speech that the bank has not ‘declared victory against second round effects’ of inflation. 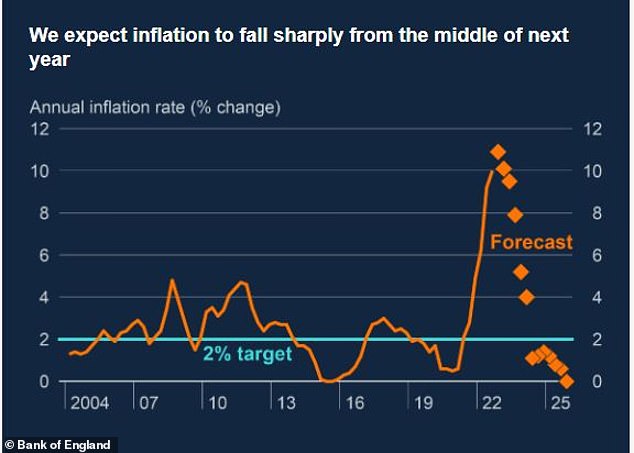 Going down? The BoE expects inflation to fall sharply from the middle of next year

He added: ‘In an environment where headline inflation is high and [companies] pricing power is also high, there is a danger of a self-fulfilling and self-sustaining dynamics in the wage prices and cost nexus.’

‘We have done some [tightening] and there is more to do. That doesn’t mean we’re going to move at a pre-defined pace until kingdom come. At some point you have to think about what level of rate is appropriate.’

But ING believes the slower hiking cycle will be a net gain for the fight against inflation, as well as being positive for the economic outlook.

It said: ‘The Fed, and other central banks, can remain hawkish for even longer in the new phase of this tightening cycle if data fails to fall quickly enough.

‘The result, compared to a counterfactual where hikes proceed at a faster 75bp pace, means less risk of an economic, or financial, accident, but it also implies a more protracted hiking cycle.

‘We would challenge the narrative that this should result in higher inflation expectations. In our view, this new phase also reduces the risk of a too early end to this cycle, and so of inflation resurgence.

‘The upshot is, higher real rates, and for longer. This needs not be negative for risk sentiment, if tail risks reduce as a result.’

Taking the opposing view, HSBC has revised down its forecasts for UK interest rates in the current tightening cycle, and now sees just two more increases.

It now forecasts a 50bps increase in December, followed by a 25bps hikes in February, taking the base rate to just 3.75 per cent.

‘Whether or not the BoE is ultimately proved right, less tightening is likely in the near term,’ HSBC analysts said in a note.