Hundreds of villagers broke Covid lockdown in India to attend a funeral for a horse as the country’s official death toll topped 300,000 today.

Police say villagers in southern Karnataka state gathered on Sunday to pay respects to the animal, which had belonged to a local religious organisation.

Video shows dozens of people gathered in a public square to lay floral tributes on the body of the horse, before a packed procession through the streets attended by hundreds – most of whom were not wearing masks.

Police say the village will now be cut off for 14 days with nobody allowed in or out while surge testing is carried out.

#WATCH Hundreds of people were seen at the funeral of a horse in the Maradimath area of Belagavi, yesterday, in violation of current COVID19 restrictions in force in Karnataka pic.twitter.com/O3tdIUNaBN 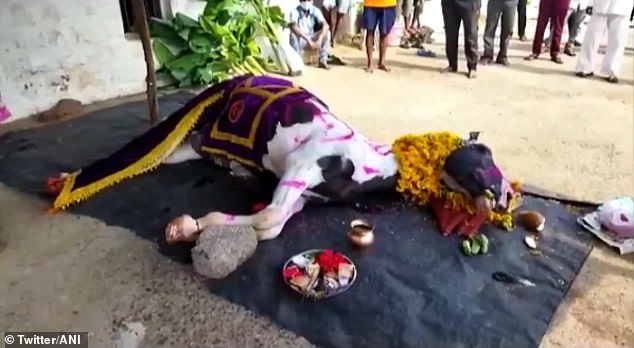 Dozens had gathered in a public square to lay floral tributes on the horse’s body, before it was paraded through the streets and then cremated

A case has also been opened against the organisers for breaking Karnataka’s lockdown rules, which ban any type of mass gathering until at least July 7.

India has been suffering through the world’s worst second wave of Covid, driven in part by a variant which is now widely thought to be more infectious than the original virus, and in part by lax lockdowns and social distancing.

The country’s vaccine programme is also lagging behind economically developed countries, with only around 10 per cent of people protected by at least one dose.

Daily case figures in the Asian nation – which for a time accounted for around 40 per cent of global totals – are now falling, but remain extremely high.

India is currently reporting around 250,000 cases per day according to seven-day average data, having peaked just shy of 400,000 earlier this month.

That is still far above second-place Brazil, which is reporting around 35,000. Both nations are thought to be under-counting the true total by several orders of magnitude.

While India’s cases have started to fall, deaths are still rising and recently topped 4,000 per day according to seven day averages.

However, deaths are rising much slower than they have been in recent months, and are expected to start falling in the coming weeks.

India’s death toll is the third-highest reported in the world, accounting for 8.6 per cent of the nearly 34.7 million coronavirus fatalities globally. 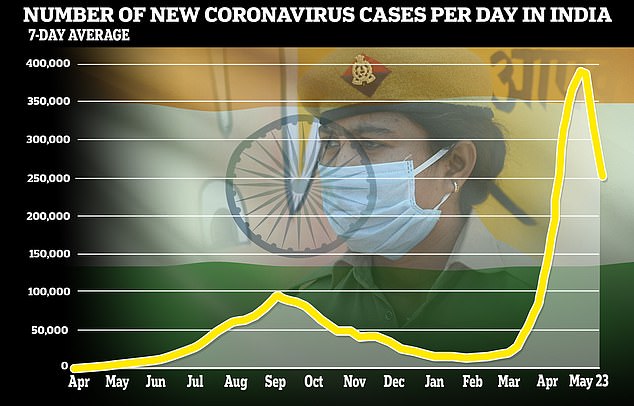 India’s second wave of Covid is beginning to slow down, but the country is still reporting the largest daily case totals of anywhere in the world 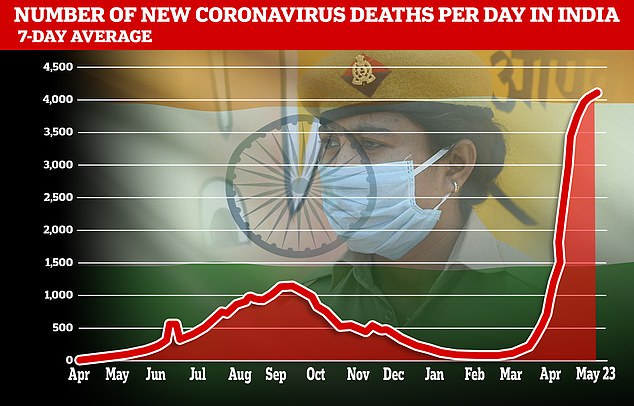 Deaths are continuing to rise in India though at a slower rate as the pace of infection lessens, with more than 4,000 fatalities reported each day on average (pictured) 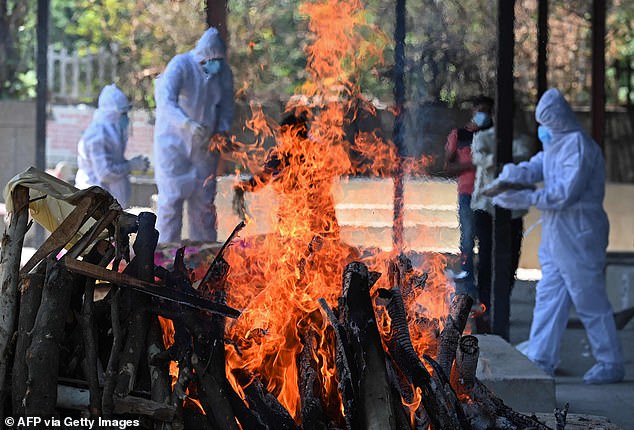 Crematorium staff, who have been working around the clock since the second wave began to rise in April, light a funeral pyre in New Delhi on Monday

Even so, the true number is thought to be significantly greater, with analysts estimating anything between twice and ten times as many people have died as on the official count.

It also reported 222,315 new infections, which raised the overall total to nearly 27 million.

From the remote Himalayan villages in the north, through the vast humid central plains and to the sandy beaches in the south, the pandemic has swamped India’s underfunded health care system after spreading fast across the country.

In the capital, New Delhi, residents have died at home with no oxygen as hospitals exhausted limited supplies.

In Mumbai, COVID-19 patients have died in crowded hospital corridors.

In rural villages, fever and breathlessness took people before they were even tested for coronavirus.

While the megacities have seen signs of improvement in recent days, the virus isn’t finished with India by any means. 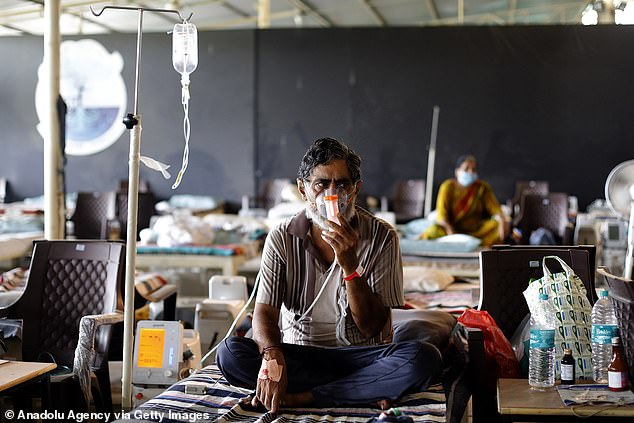 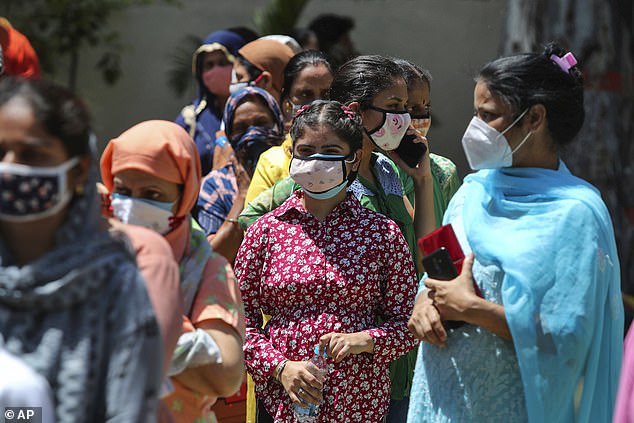 People line up to get a Covid test in Jammu, northern India, as the country continues to suffer through a potent second wave of the virus 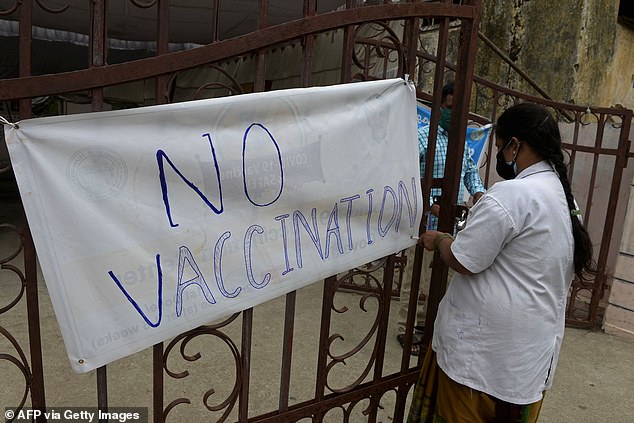 India has been trying to vaccinate its way out of the crisis, but jabs are in short supply and it will take months to ramp up production (pictured, a vaccine centre is closed in Hyderabad)

It appears to have already taken a ghastly toll in the country’s vast rural areas, where a majority of the people live and where health care is limited.

In recent weeks, hundreds of bodies have washed up on the banks of the Ganges River in Uttar Pradesh state.

Many others have been found buried in shallow graves along its sandy banks. It has prompted concerns that they’re the remains of COVID-19 victims.

India’s vaccination drive has also slowed recently, and many states say they don’t have enough vaccines to administer.

The world’s largest vaccine-producing nation has fully vaccinated just over 41.6 million people, or only 3.8% of its nearly 1.4 billion population.

The next 100,000 deaths were recorded in just 27 days after new infections tore through dense cities and rural areas alike and overwhelmed health care systems on the brink of collapse.

Average daily deaths and cases have slightly decreased in the past few weeks and the government on Sunday said it is conducting the highest number of COVID-19 tests, with more than 2.1 million samples tested in the previous 24 hours.