Astonishing new video appears to show a man flying with a jet pack at 3,000 feet over the coast of California.

The footage was captured by a member of the Sling Pilot Academy during a training flight on Monday, bolstering previous alleged sightings of a ‘jet pack guy’ in the skies above Los Angeles International Airport.

Both the FBI and the Federal Aviation Authority have opened investigations into those purported incidents, which occurred in August and October.

Sling Pilot Academy shared the vision on their Instagram page on Wednesday, which was captured over Palos Verdes, just 10 miles south of LAX.

The pilot who captured the remarkable footage subsequently confirmed its authenticity to The Drive.

They told the publication that there was ‘no communication from the object or about the object on the usually busy radio channel used for the training area.’

The sighting has now been reported to the FAA.

Astonishing new video appears to show a man with a jet pack flying at 3,000 feet over the coast of California. The footage was filmed Monday by a pilot at member of the Sling Pilot Academy 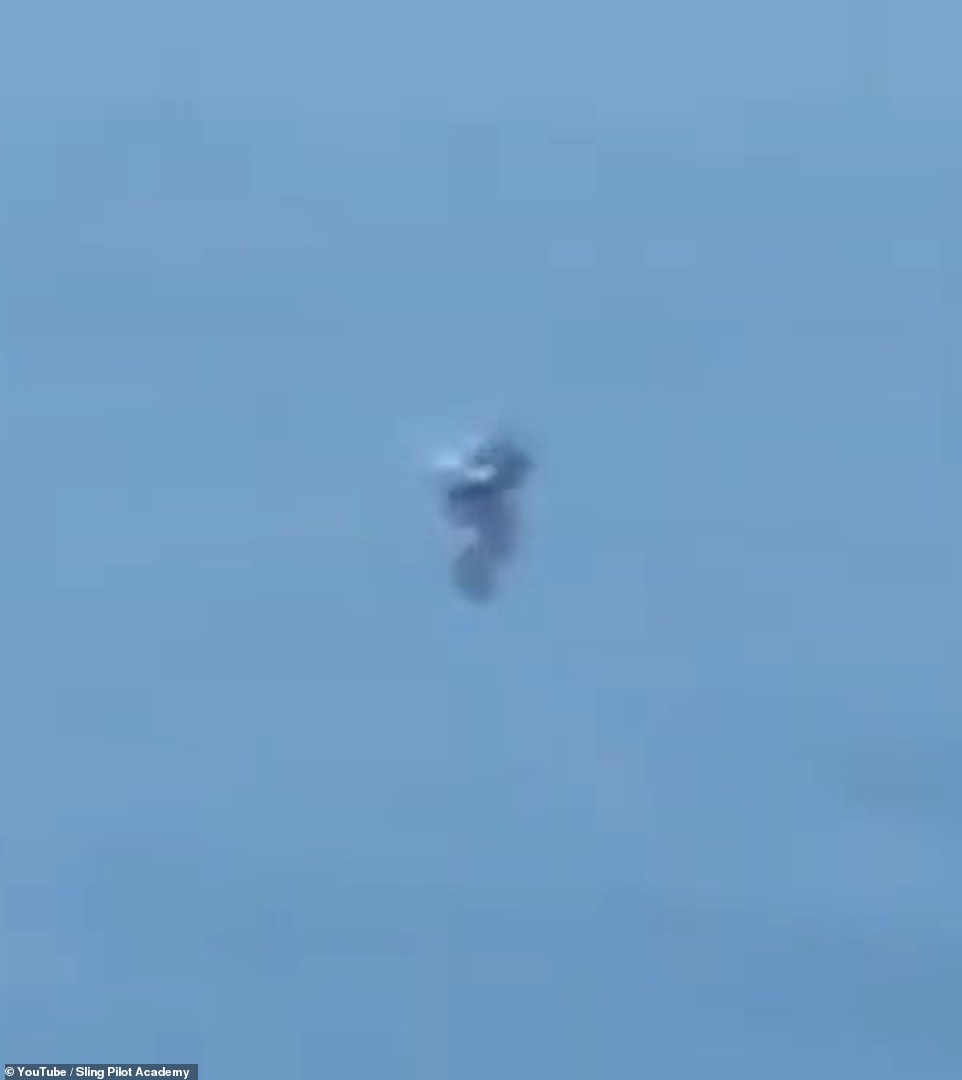 The incredible 30-second clip clearly shows a large human-like figure soaring over the water off the coast, high above a stationed cargo ship.

‘The video appears to show a jet pack, but it could also be a drone or some other object,’ pilots from the Academy wrote in a caption.

‘If it is a ‘guy in a jet pack’ then it remains to be seen whether it is a legal test flight (jet packs are real – there is a manufacturer near Los Angeles) or related to the jet pack sightings near LAX recently that caused disruptions to air traffic.’

However, The Drive reports that, in their current form, jet packs have ‘very short ranges and are not equipped to be flying in dense airspace, especially thousands of feet in the air’. 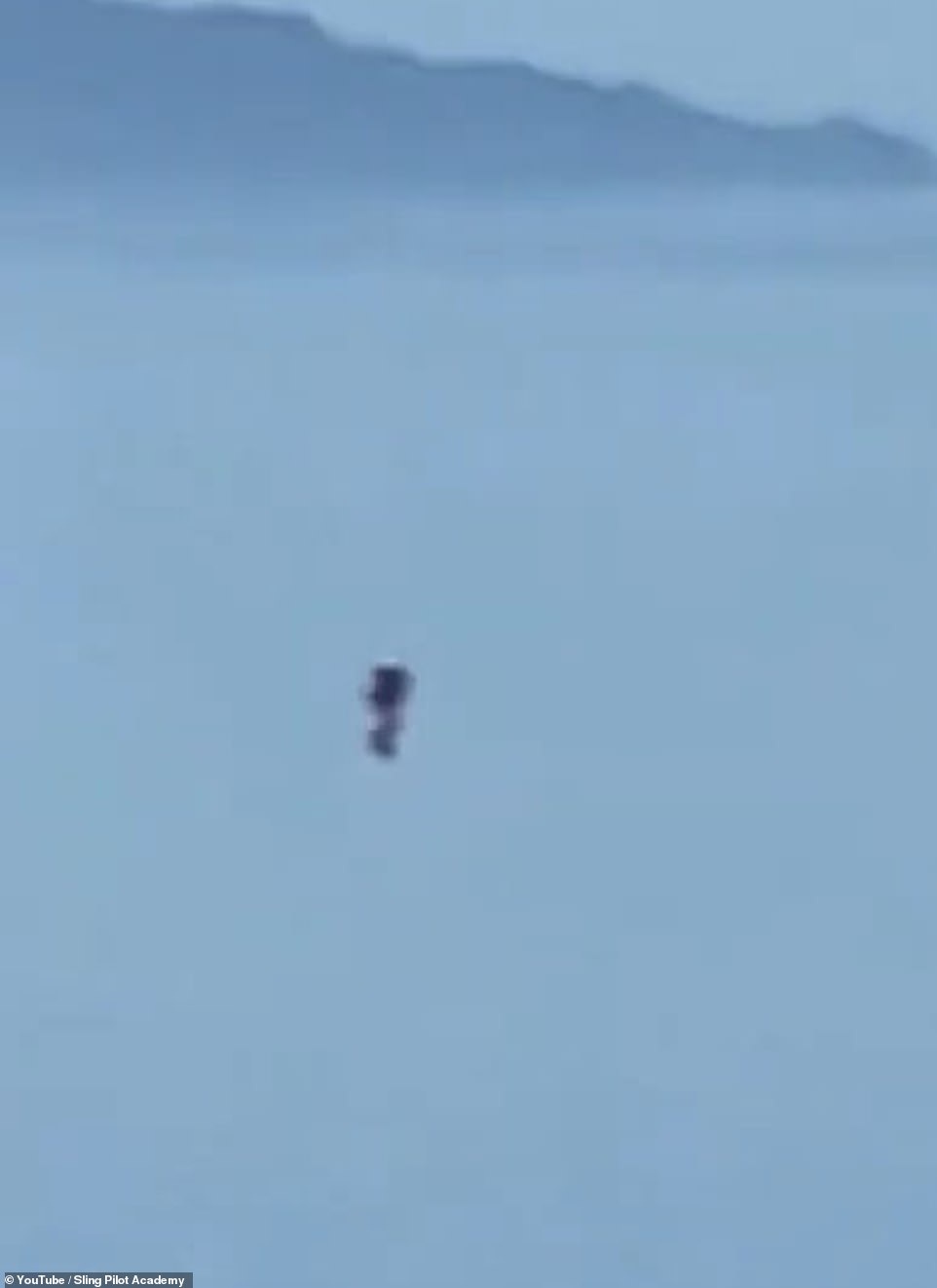 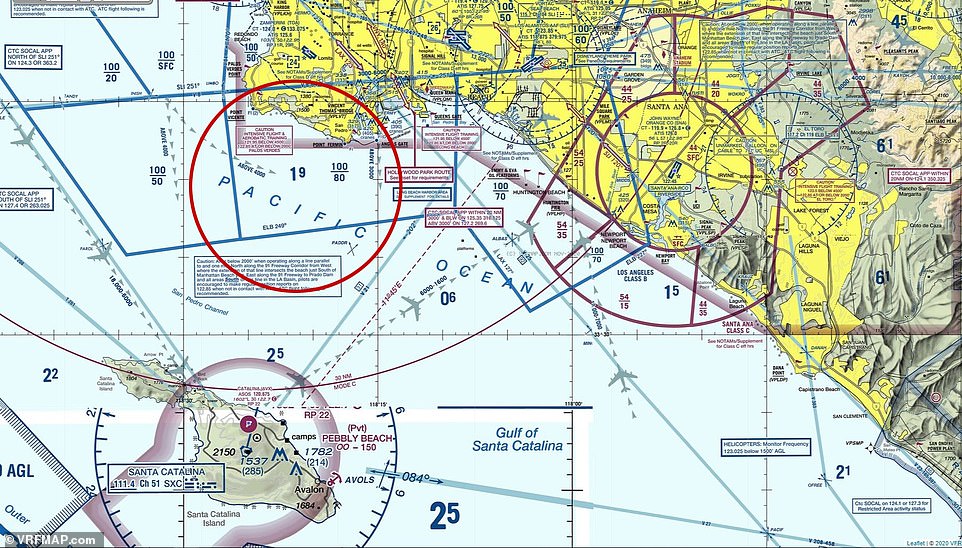 On August 30, two separate pilots descending their planes into LAX reported seeing a man flying above the air port with a jet back on his back. 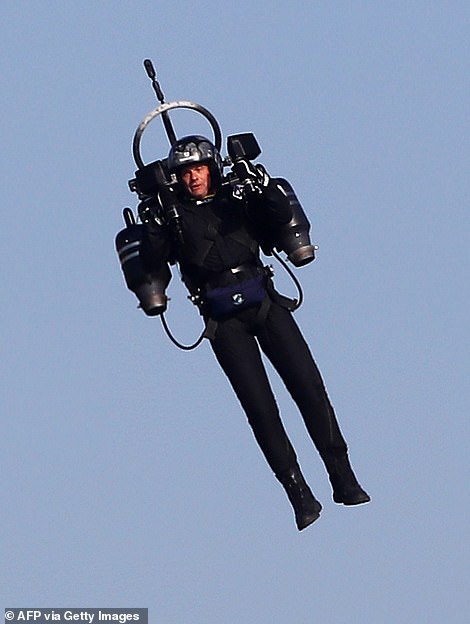 Fox 11 Los Angeles obtained recordings of communications between one the pilots and a control tower.

‘American 1997, OK, thank you, were they off to your left side or your right side?’ the controller asked.

‘Off the left side at maybe 300 yards or so at our altitude,’ the pilot responded.

Another pilot also reported seeing a person flying with a jet pack at the same time.

The sighting was not confirmed, and nobody was identified in regards to the incident.

At the time, the CEO of Jetpack Aviation, claimed current technology would make such sightings almost impossible.

‘They’d run out of fuel, they use fuel too quickly,’ Mayman continued.

‘If it’s a real jet pack, its noisy. People would have heard it take off and land.’

He believes that if the pilots did see a jet pack, it was likely that ‘whoever flew this probably built it themselves’. 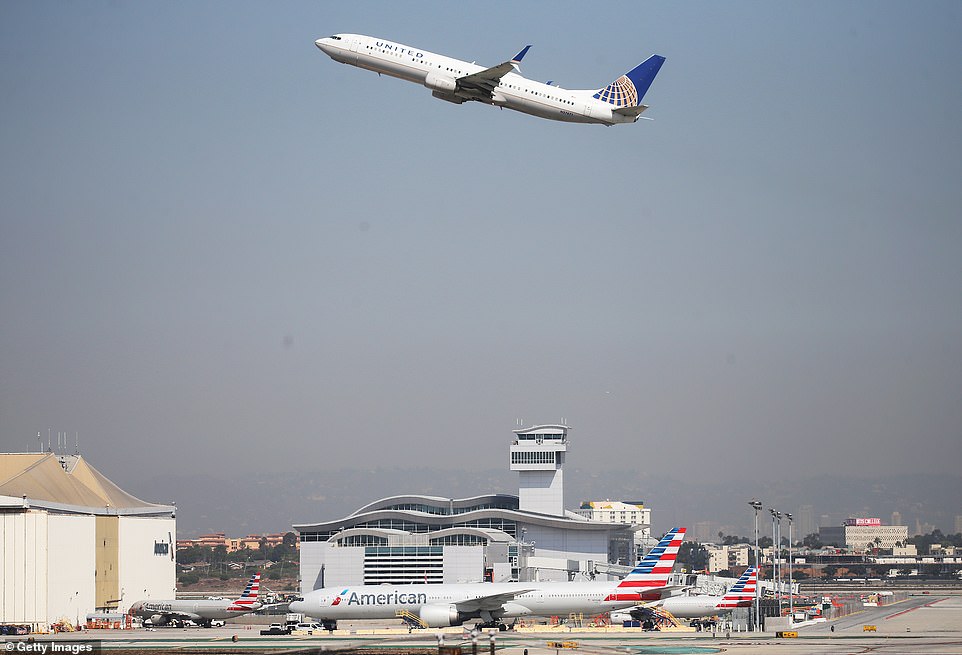 But just six weeks later, on October 14, the crew of China Airlines Flight 006 reported seeing a man flying through the skies in a jet pack as they descended into LAX in the early afternoon.

That sighting occurred 6,000 feet in the air.

A person at a ground control tower asked whether it could be some sort of UAV (Unmanned Aerial Vehicle), to which the pilot replied: ‘It’s like a jet pack. Too shiny’.

That incident was also reported to the FAA, who stated: ‘A China Airlines crew reported seeing what appeared to be someone in a jet pack at an approximate altitude of 6,000 feet, about seven miles northwest of Los Angeles International Airport.’

It is certainly possible for jet packs to reach that height, but they quickly run out of fuel and those who are flying with them usually parachute back to earth.

Back in February, the company Jetmen In Dubai conducted a test flight where a man flew with a jet pack 5,905 feet into the air before parachuting back down.

Meanwhile, Mayman, the CEO of Jetpack Aviation, says his company is working on new technology which could elevate fliers to 15,000 feet. 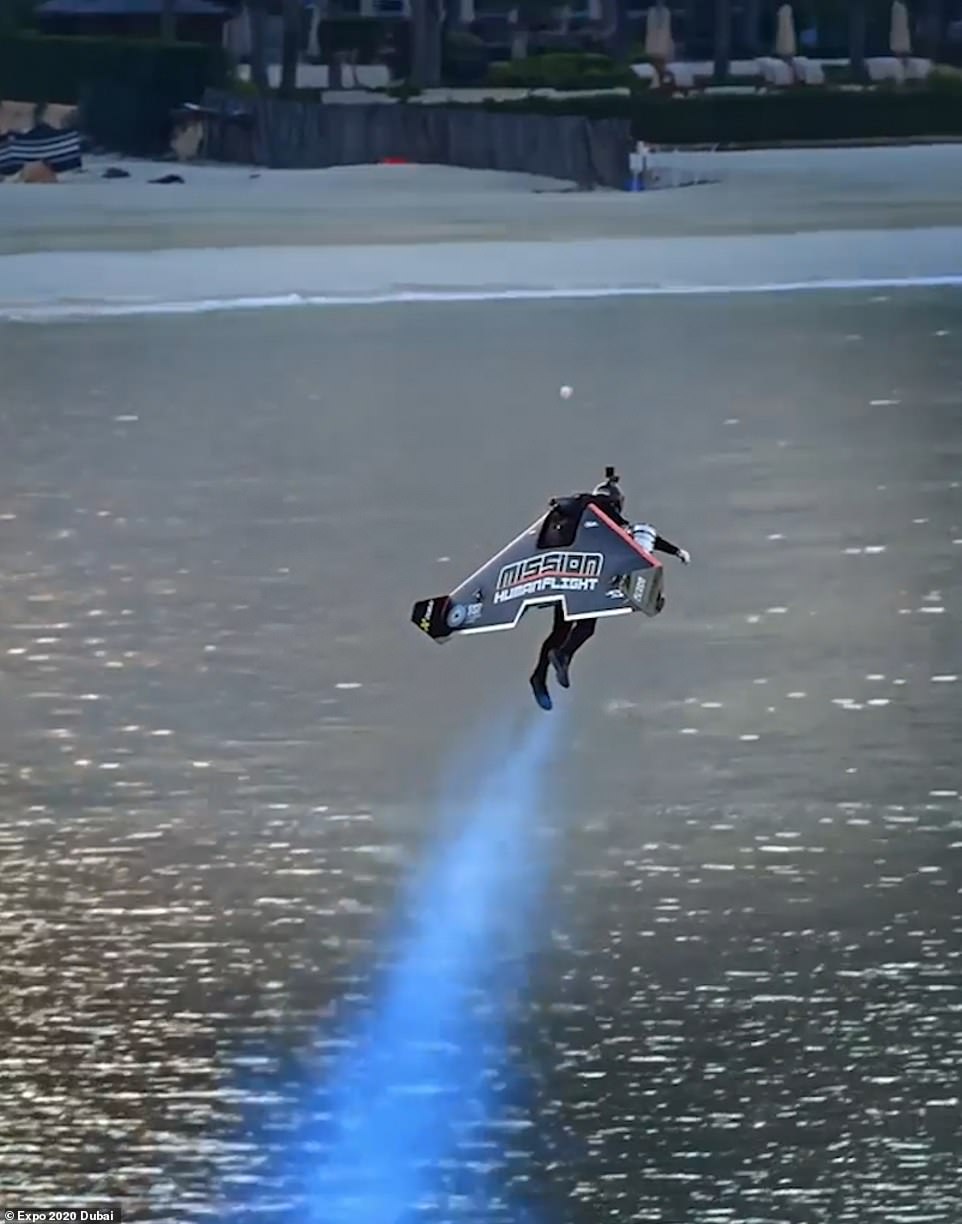 Back in February, the company Jetmen In Dubai conducted a test flight where a man flew with a jet pack 5,905 feet into the air

Jetpack Aviation, located in the San Fernando Valley north of Los Angeles, is now on its second research and development contract with the military, according to the Los Angeles Times.

It began its first contract in 2016 but says it did not sell any of the devices, despite working toward a prototype.

In 2019, Jetpack Aviation had expected to have an individual lift devices, or ILD, ready as a prototype for testing by the U.S. Special Operations Command (USSOC) by that summer.

The company told Stars & Stripes that is was the ‘first and only company’ to develop jet pack technology for USSOC.

‘The possible uses of this technology are still being evaluated. USSOCOM does not discuss specific details or potential applications of such technologies,’ they said.

‘We work together with their operators, with their team members, for exactly what our jet packs would need to be useful on a real mission — endurance, height, speed, payload, that sort of thing.’

The second contract is now looking to develop a Speeder aircraft that looks more like a motorbike.

It can be flown by a person or used like a drone and has been described by the company as the ‘world’s first flying motorcycle’ with the mission ‘to save lives’.

According to their website, the Speeder is jet-powered and can take off and land anywhere.

‘It is hands down the fastest way to get a person or cargo across town especially into or out of a high stakes environment be it military, emergency or disaster,’ they say.

The company believes it could be used to get a paramedic to their patient faster, moves patients to hospitals quicker, medevac wounded personnel from battlefield, or to move equipment or cargo into position where it would be inefficient or too risky to use a helicopter. 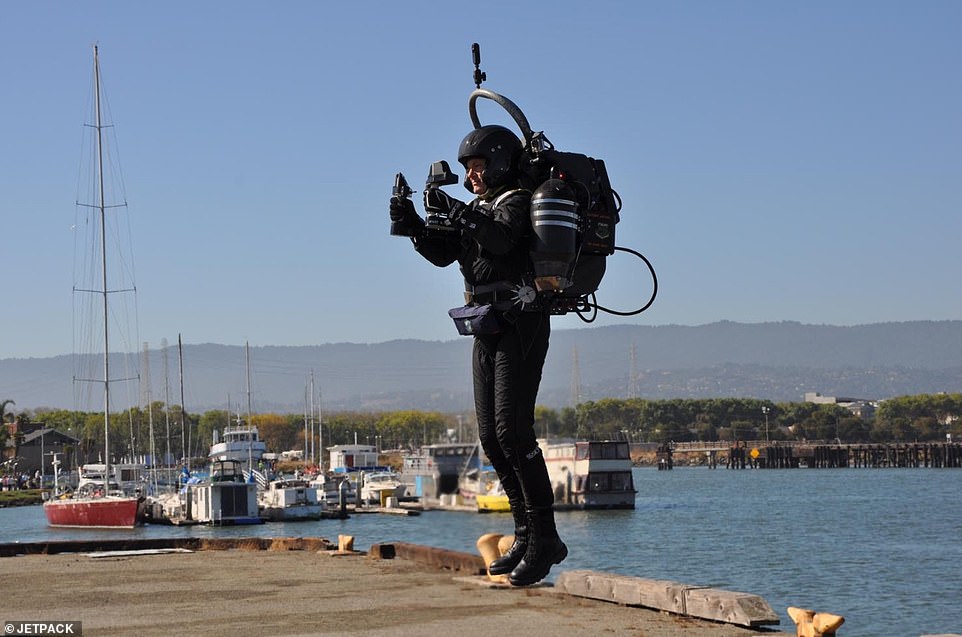 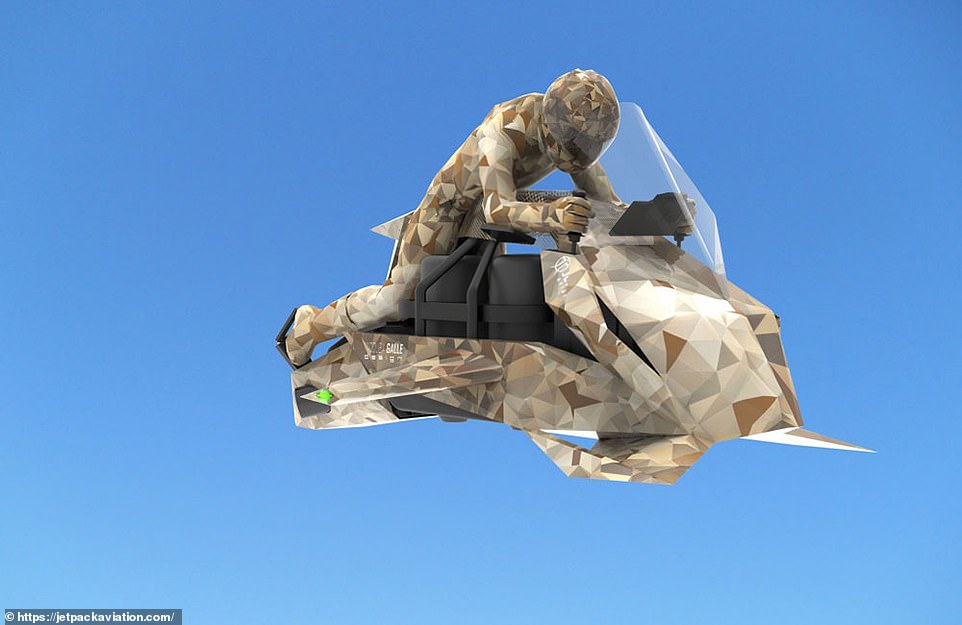 Jetpack Aviation is developing the Speeder, pictured above. It has been described by the company as the ‘world’s first flying motorcycle’ with the mission ‘to save lives’