Extraordinary scenes on the Gold Coast as the Magic Millions race day is POSTPONED after overnight deluge, leaving punters frustrated and furious

It followed a secret ballot of riders, where it was decided by majority it was unsafe to continue.

The track was deemed too hazardous following at least 22mm of downpour since Friday.

The heavy downfall was affecting visibility for the jockeys, with eight of the ten scheduled races then sensibly abandoned on the track rated as heavy. 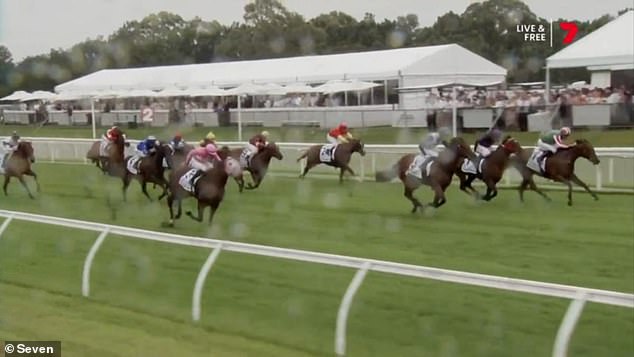 Before the postponement, a decision was made by competing hoops to continue on a race-by-race basis.

But when star jockey James McDonald reported his mount slipped in the second race on the card when on board Desperately, Queensland Racing Integrity Commission Chief Steward Josh Adams stepped in.

‘We asked the riding group (jockeys) to do a secret ballot to decide if they wanted to continue on with the race meeting,’ he said.

‘It was the decision of the riding group to withdraw their services.

‘The stewards also had a vote and we agreed the track is not (currently) safe to race on.’

🚨 Chief Steward, Josh Adams has confirmed that the Magic Millions card has been postponed with a rescheduled date yet to be determined pic.twitter.com/OS6LdlOBpf

Absolute joke that a meeting of this stature can be called off after 12mm of rain ..laughable! #magicmillions

When news filtered through trackside racing was going to be suspended, plenty were unhappy.

Keen punter Chris Ivkovic, who flew from Sydney to watch the Magic Millions in the flesh, was shattered at the outcome.

‘My wife and I were looking forward to a magical day,’ he told Daily Mail Australia.

‘Sadly, it turned into a nothing day.’

Fellow racing enthusiast ‘Nailor’ tweeted ‘Absolute joke that a meeting of this stature can be called off after 12mm of rain.. (it is) laughable.’