Police officers in Georgia discovered a newborn baby underneath the backseat of a car just moments after her mother gave birth to her there and lost track of her when the vehicle skidded off the wet roadway.

The incident took place just before dawn on Monday in Lilburn, a town that sits about 20 miles northeast of Atlanta.

Crystan Graham, who was in labor, was in the backseat of an SUV as she was being driven to the hospital by her mother, Krystal Jones.

Jones, eager to get her daughter to the Gwinnett Medical Center, drove her Chevy Tahoe at high speed down Lawrenceville Highway, which was wet at the time, according to Fox 5 TV.

Cepeda Huff, a police officer with the Lilburn Police Department in Georgia, holds newborn Cea Anderson before dawn on Monday 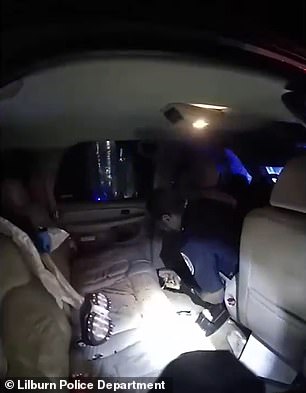 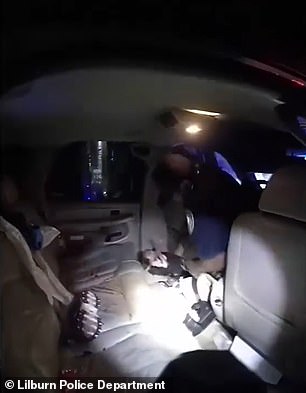 Young Cea, who weighed in at 3 pounds and 9 ounces, is doing fine in a neonatal intensive care unit near Atlanta 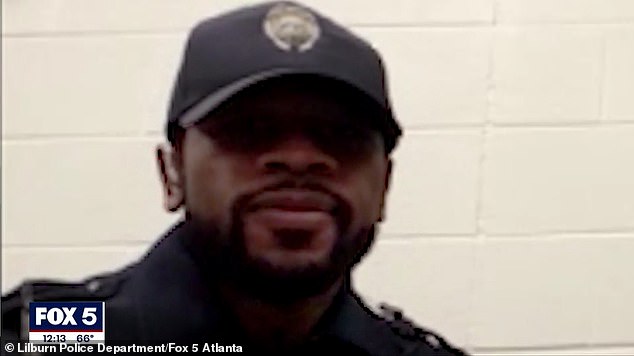 Huff (above) said that after she was born, Cea was lodged inside a pocket underneath a rear seat in the Chevy Tahoe 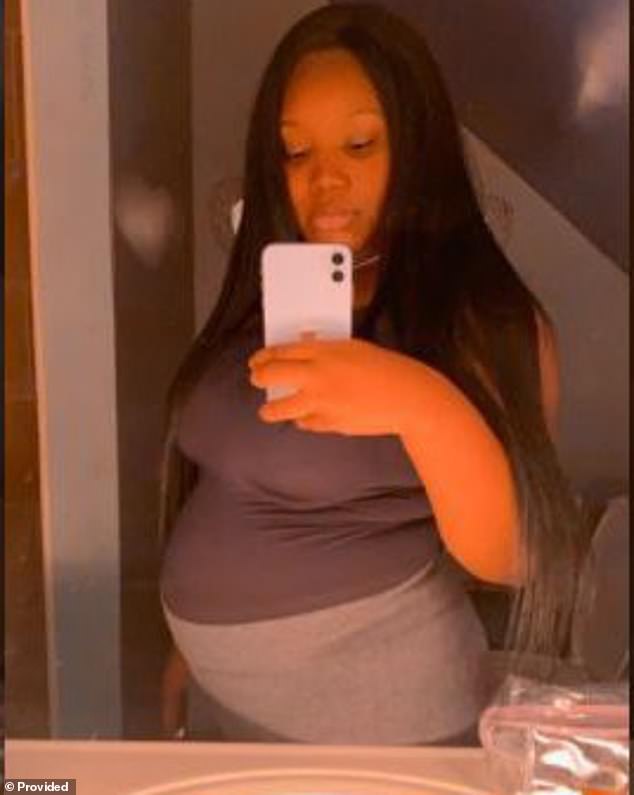 Crystan Graham, the mother, is now out of the hospital and doing well

The vehicle skidded off the slick roadway and crashed into the gate of the BAPS Hindu Temple.

While in the backseat, Graham gave birth to the infant girl as the vehicle skidded off the highway.

Amidst the chaos and the darkness, neither Graham or her mother were able to find the baby.

Three officers with the Lilburn Police Department arrived on the scene moments later.

One of the officers, Danny Bride, who just happened to be driving by the scene seconds before the accident, asked: ‘Where was the baby at?’

‘We don’t know!’ Jones said. ‘I was just trying to get to the hospital.’

Jones was holding a young child in her arms at the time the police arrived.

Bride was recording the entire encounter on his police body cam.

‘Where was the baby at?’ Bride asked.

‘In her womb!’ Jones said. ‘She was giving birth!’ 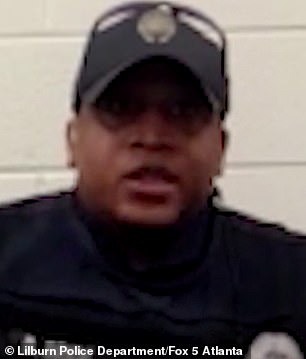 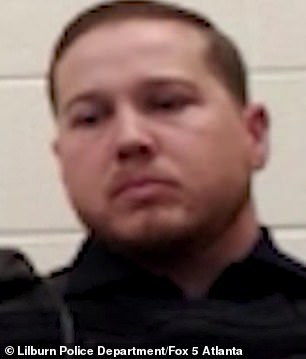 Officer Daniel Bride (left) just happened to be driving by the scene moments before the accident. He and Huff were joined moments later by Sergeant Matt Madden (right) 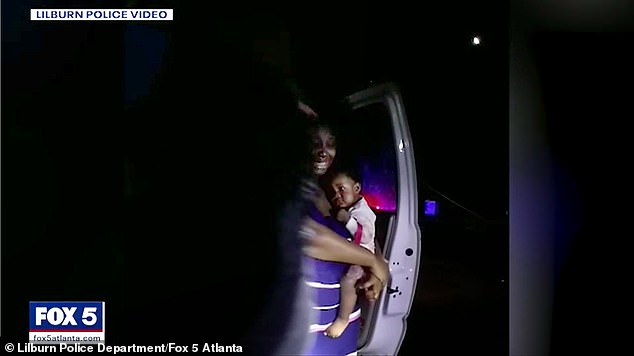 Krystal Jones, Graham’s mother, was driving the SUV while her daughter was in the backseat in labor 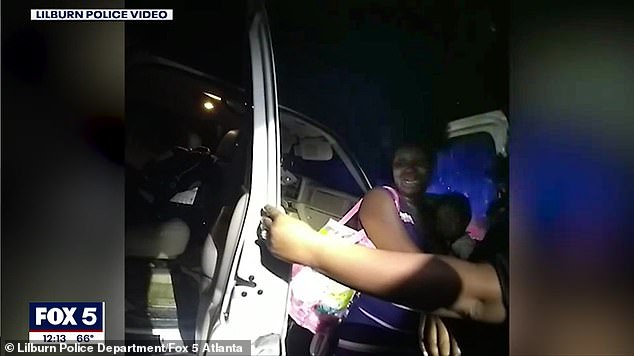 ‘We thought the baby might have gone out the window because there was so much debris in the back,’ Bride told Fox 5.

‘Our concern was whether the baby got tossed into the backseat or got tossed through the window.’

Another officer, Cepeda Huff, also arrived on the scene, as did Sergeant Matt Madden.

The officers struggled to see in the pitch-black darkness. They scanned the surrounding area with their flashlights and saw shards of glass and other debris left behind by the accident.

‘With the Georgia red clay and a newborn baby, I was thinking it was blending in with the mud,’ said Huff.

Bride is heard asking Huff to look under the middle row seat of the SUV.

Bride thought he may have seen a piece of the umbilical cord.

That is when Huff found the baby girl alive and well.

‘There is like a small little drop-off under the seat,’ Huff said. 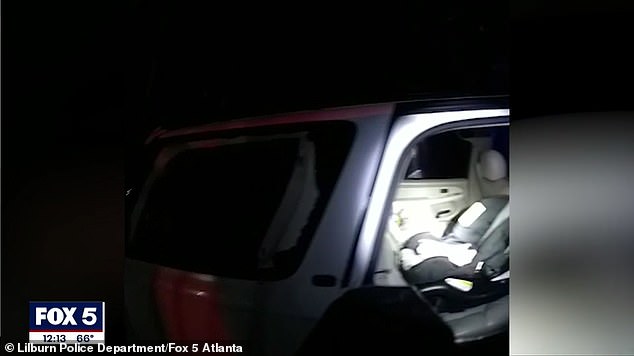 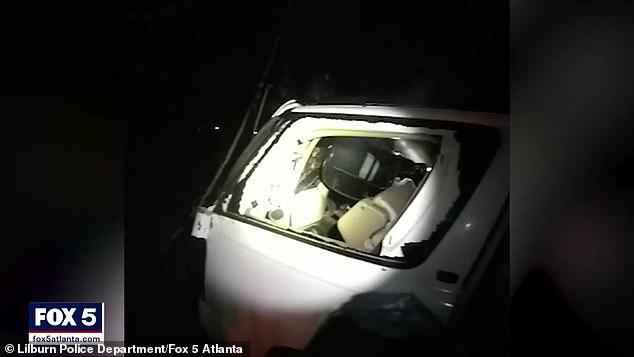 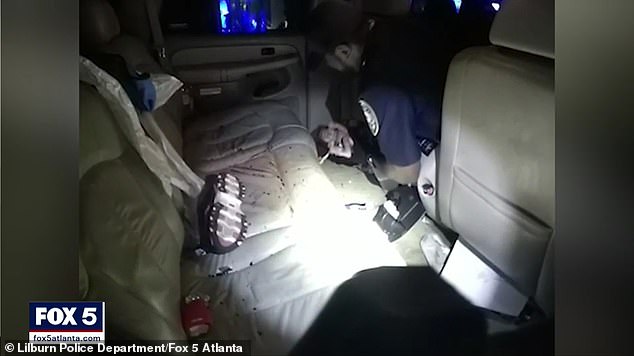 Huff cradled the infant in his arms and rushed her to an ambulance. He then went over to the panicked mother and grandmother to give them the good news.

‘We got your baby,’ Bride said. ‘Looks to be fine. She’s breathing and moving just fine.’

She was born 3 pounds 9 ounces.

Her mother, Graham, is out of the hospital.

Jones referred to the three officers who found the baby as her angels.

‘It’s a great way to end a shift and it’s just about being in the right place and the right time,’ said Bride.