A car enthusiast is set to put his collection of seven stunning classic Lotus Elans up for auction – and is expected to make in the region of £700,000 from the sale next month.

Adding to their value is the fact many of the collection’s British sportscars have famous former keepers, including one owned by Peter Sellers and another gifted to a Formula One champion weeks before his untimely death.

Silverstone Auctions will be responsible for selling the vehicles on 25 February and says there will ‘never again be an opportunity like this one’ for petrol heads to get their hands on classic Lotus models from a collection ‘put together with a master’s eye’.

One man’s Lotus haul: These are just four of the classic Elans from a single collection that are due to be sold at a UK auction next month If the cars sell around their higher estimate figures, they could bring in a total figure in the region of £700,000

All seven classics will go under the hammer at the auction house’s Race Retro sale at Stoneleigh Park in Warwickshire next month.

They are part of the ‘Piddington Collection’ and all are said to have a ‘wonderful history’ that should make them hugely appealing to well-heeled classic car connoisseurs.

The vendor who has amassed this stunning collection is Deryck Norville.

Mr Norville is a former motor engineer who worked for British engine specialist Cosworth, which is one of the top three race engine producers alongside Mercedes and Ferrari, having produced powertrains that have taken 176 F1 victories in total. 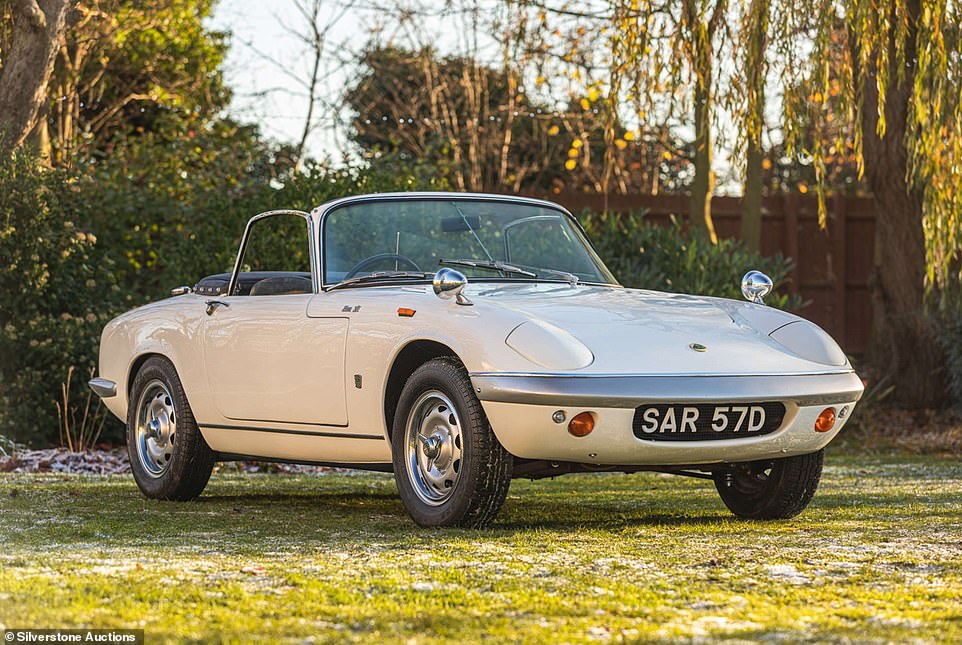 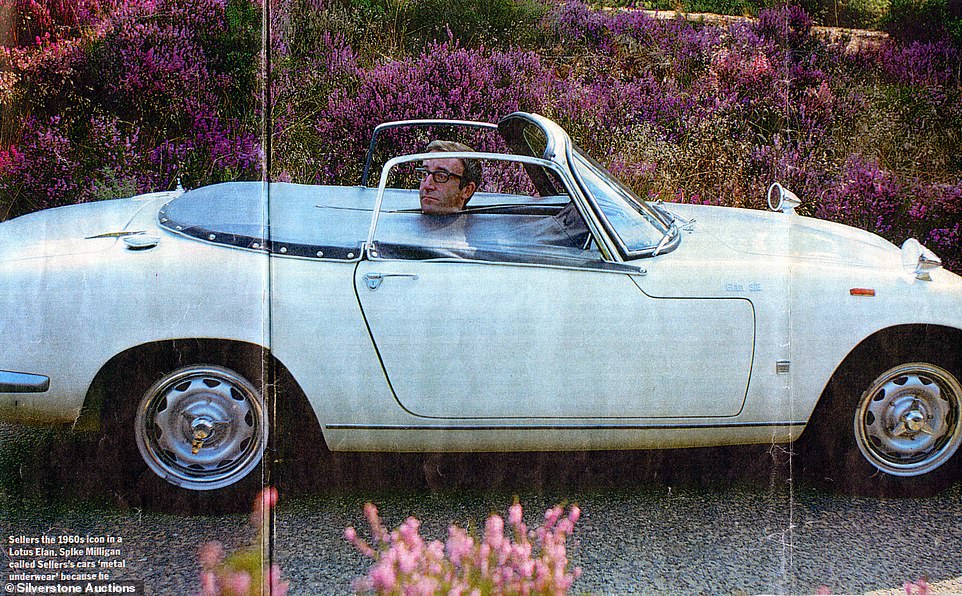 Sellers, who died in 1980, was well-known to be a big motor fanatic. Fellow actor and friend Spike Milligan described his cars as ‘metal underwear’ because he changed them so regularly. The actor is pictured here in the Elan being auctioned 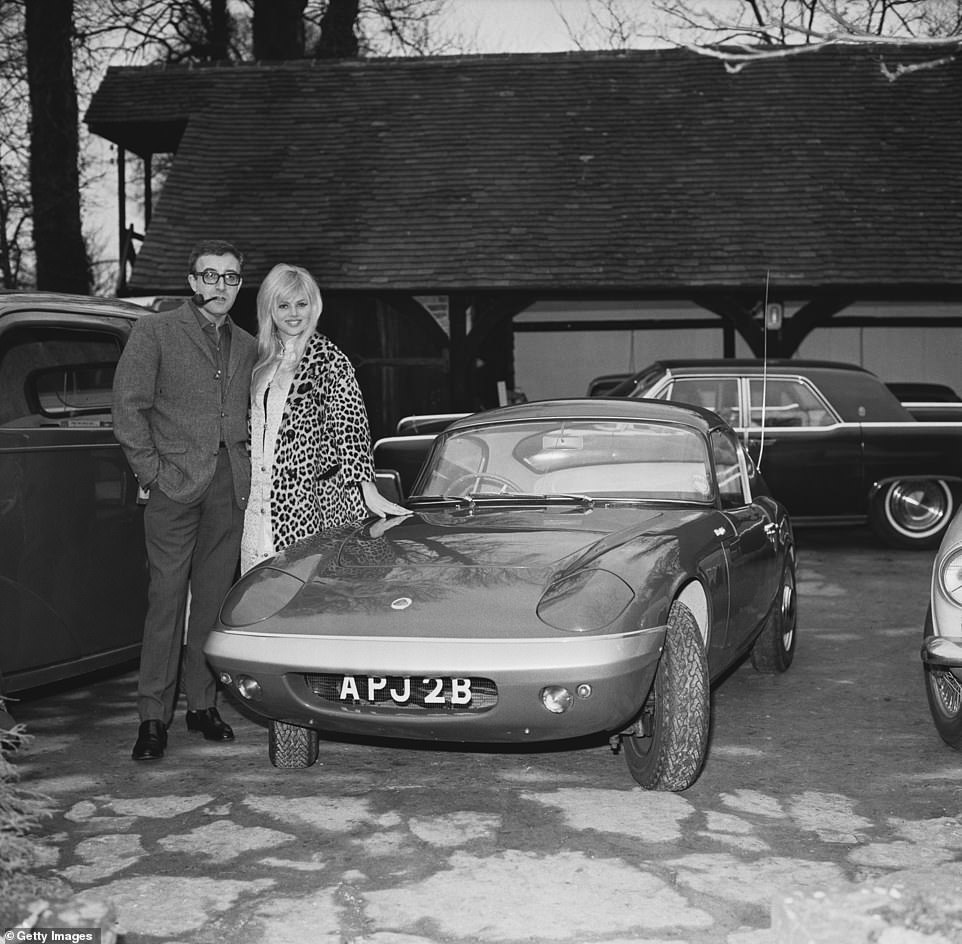 Pictured in 1964, Peter Sellers presented this Lotus Elan (not one of the cars for sale) to his then finance, actress Britt Ekland

REVEALED: The 10 biggest prices paid for classic cars at UK auction in 2022 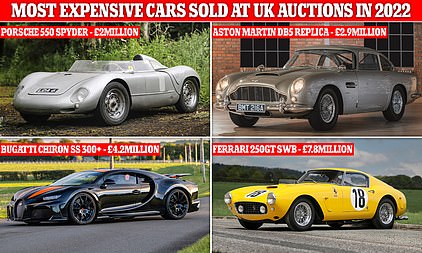 The UK might have be on the brink of a recession but it didn’t stopped petrol heads and motor enthusiasts from splashing out on mega-expensive cars last year.

We exclusively teamed up with classic car valuations experts at Hagerty UK at the end of the year to take a look at the priciest vehicles that went to the block at British sales in 2022.

Leading the selection of stunning Lotus sportscars is a 1966 Elan S3 formerly owned by the late British actor and comedian Peter Sellers, who famously appeared on BBC Radio comedy series The Goon Show and went on to play Chief Inspector Clouseau in The Pink Panther series.

Sellers, who died in 1980, was well-known to be a big motor fanatic.

Fellow actor and friend Spike Milligan once described Sellers’ cars as ‘metal underwear’ because he changed them so regularly.

The rare white Elan model being sold from the collection was originally delivered to Sellers’ Haymarket home on 22 June 1966 and, when in London, was driven by him – with wife Britt Ekland in the passenger seat – until 1969.

The car has recently been treated to a thorough restoration and hasn’t covered a mile since being completed.

Showing just 60,000 miles on the clock from new – that’s an average of just over 1,000 miles a year – the Lotus’ engine is barely run in by relative classic car standards.

Silverstone Auctions estimates it will go for between £80,000 and £120,000 when the hammer drops in just over a month’s time.

And it’s not the only 1966 Elan S3 predicted to sell for that amount of money.

The same guide price has been placed on a Drophead Coupe that has actress Diana Rigg among its former keepers.

It was gifted to Rigg – who played Emma Peel in 51 episodes of the long-running British TV hit The Avengers – after filming of series 5 and 6 concluded in 1969. 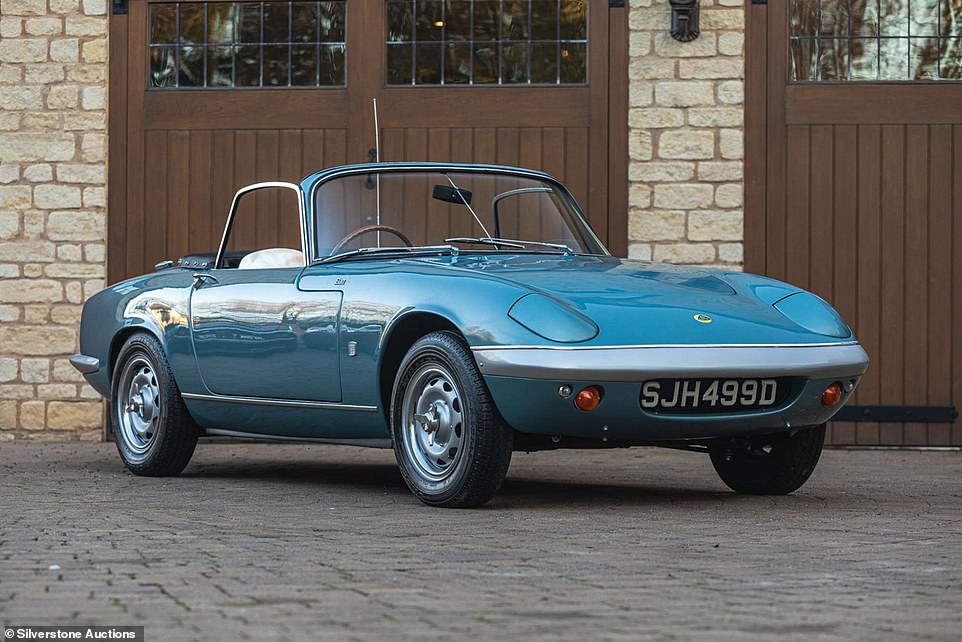 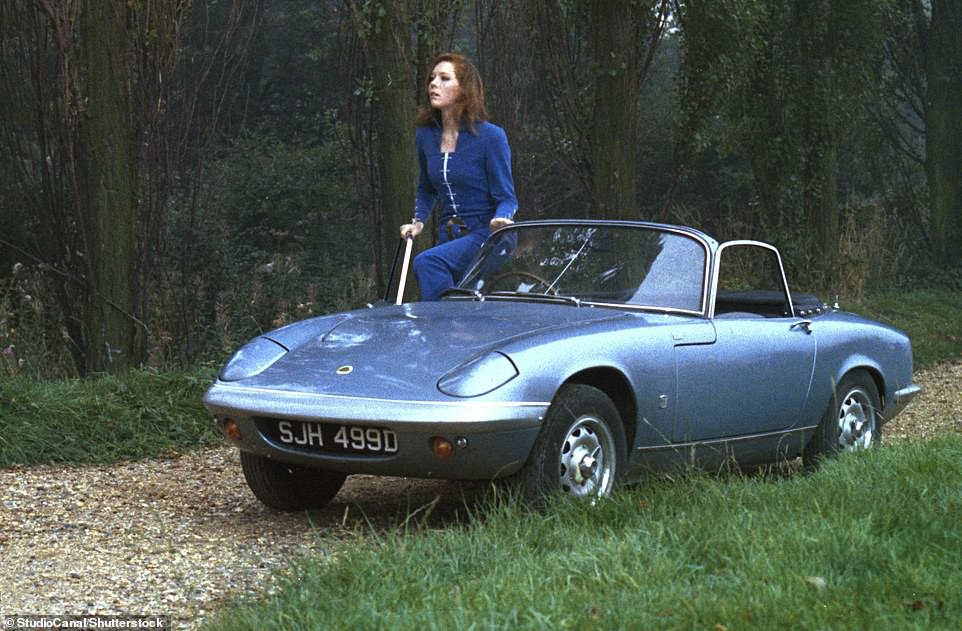 Diana Rigg, who played Emma Peel in the popular British TV series, is pictured with the car during filming of season 5 of The Avengers

Also given a top estimate of £120,000 is a 1969 Lotus Elan S4 Fixed Head Coupe, which has been owned and driven by a Formula One World Champion.

The royal blue Elan in question was presented to Jochen Rindt by Lotus founder, and car design and engineering icon, Colin Chapman.

It was gifted to the Austrian driver at Hockenheim in August 1970 after his victory in the Lotus 72 at that year’s German Grand Prix.

Sadly, it was to be his final win prior to his untimely death at Monza in Italy a few weeks later. Rindt remains today the only posthumous F1 champion, with his trophy handed to his widow Nina at the end of the season. 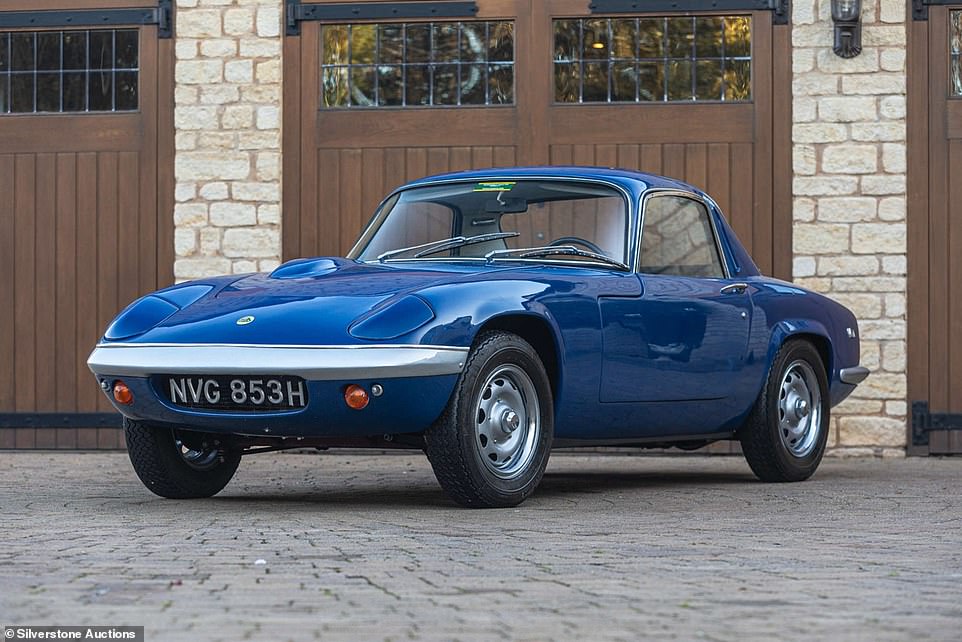 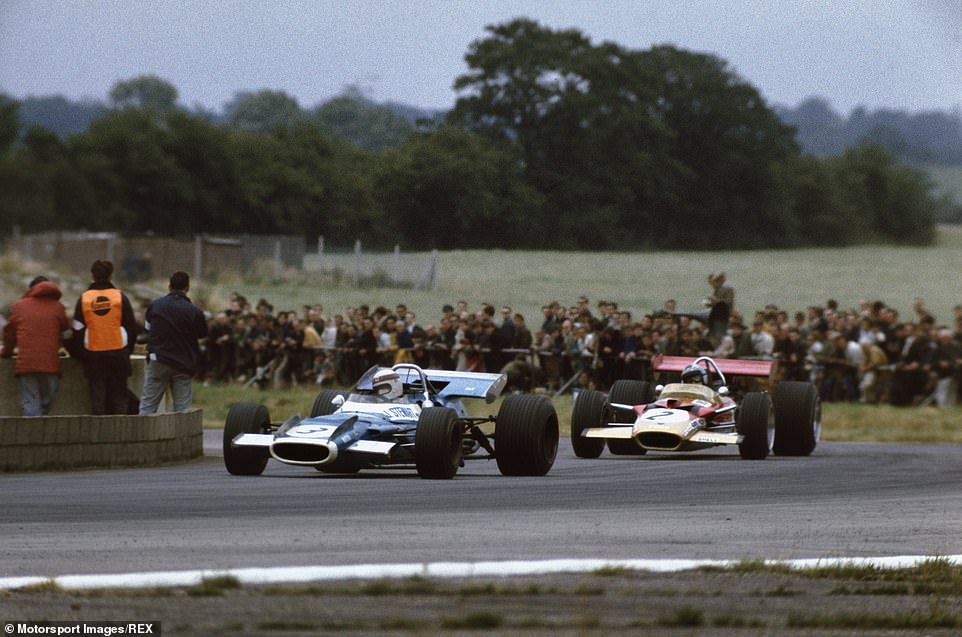 Jochen Rindt, pictured in his Lotus (second car) in 1969 chasing Sir Jackie Stewart, remains today the only posthumous F1 champion. He died in a crash at Monza in 1970, though secured enough points to take the crown

Commenting on the availability of the seven British classic machines, Rob Hubbard, sales director of Silverstone Auctions, said: ‘If ever you have wanted to purchase a Lotus Elan there will never again be an opportunity like this one, to choose your ideal car from this outstanding collection put together with a master’s eye by Deryck Norville.

‘Each one also comes with a provenance that just adds to their interest.

‘This Piddington Collection is one for the true Lotus afficionado.’ 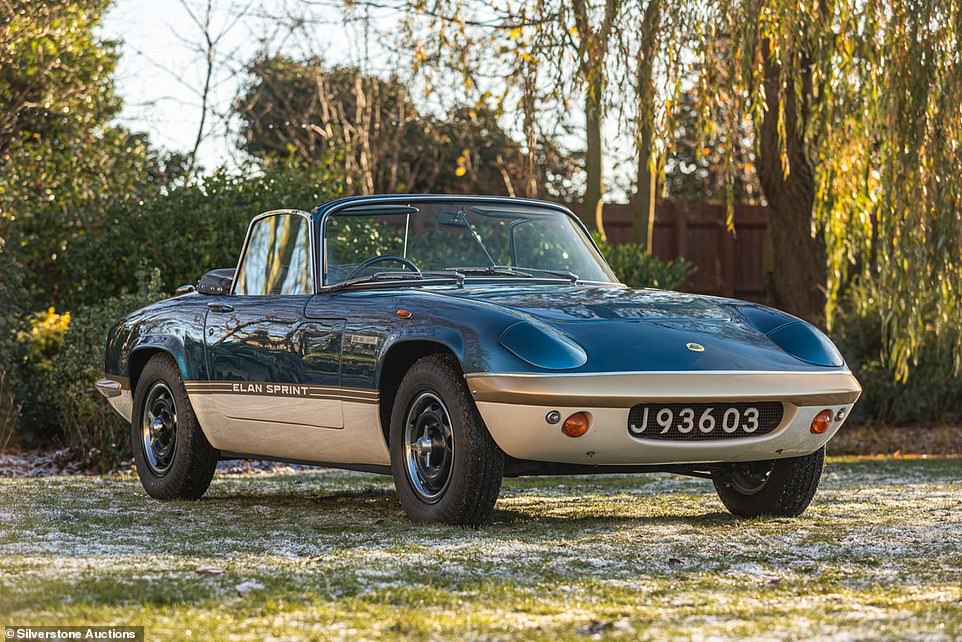 Another of the examples from Mr Norville’s collection is this 1971 Elan Sprint Drophead Coupe. It was first owned by vehicle designer Ron Hickman, who for years had worked alongside Lotus founder Colin Chapman. The car’s guide price is £70,000 – £90,000

The remaining four cars include a 1971 Elan Sprint Drophead Coupe, which was formerly the property of Ron Hickman – the South African-born, Jersey-based vehicle designer and inventor who worked with Colin Chapman for years.

Hickman headed up the design team at the British brand and was responsible for the original Elan, the +2 and the Europa. However, he is probably best known for creating the Black and Decker Workmate.

The car was purchased from the Hickman family by Mr Norville in 2020 and although it remained exactly as it was post-restoration, it was given a very light recommission upon its return to the UK prior to joining the Piddington Collection. 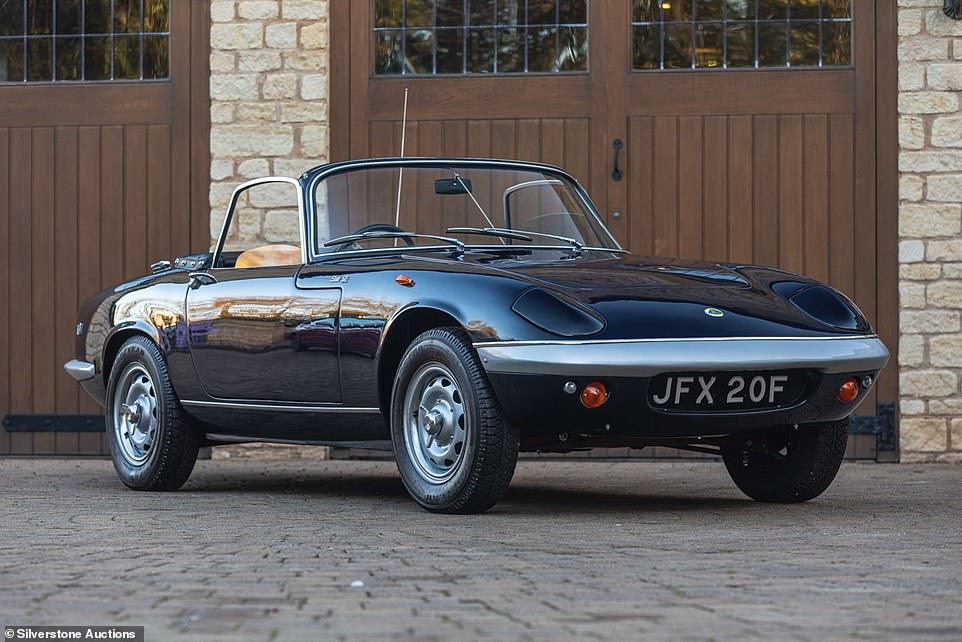 An S4 Coupe – also a 1968 car – that was given to Keith Duckworth, co-founder of Cosworth Engineering, by Lotus Cars to commemorate the first win by a DFV-engined Grand Prix car at the Dutch GP in 1967 is also available in the collection as well as a 1975 Elan Sprint – believed the be the best fixed-head coupe example in the country – that was in the same ownership for 39 years until Mr Norville bought it in 2014. 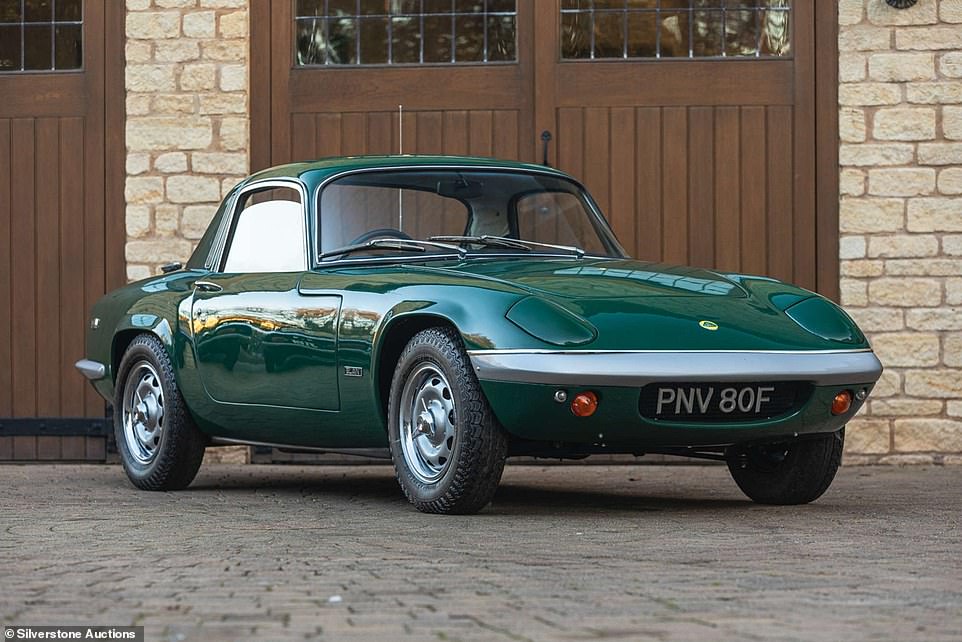 Keith Duckworth, the co-founder of Cosworth Engineering who worked with Colin Chapman’s Lotus Cars, was the original owner of this 1968 Elan S4 Coupe. Silverstone Auctions expects it to make between £50,000 – £80,000 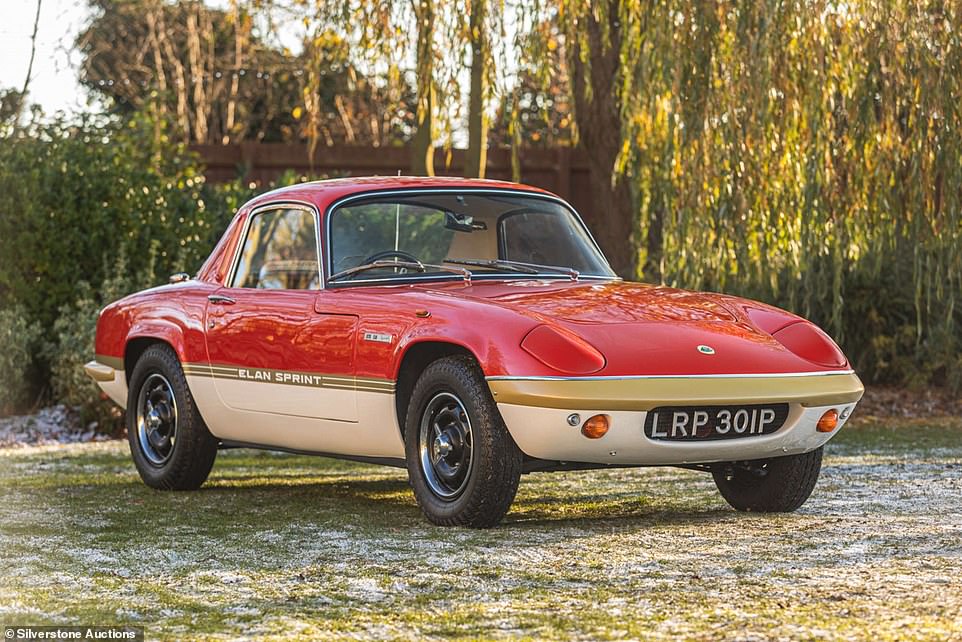 Finally, this 1975 Lotus Elan Sprint had been retained in one family’s ownership for almost four decades before Mr Norville purchased it in 2014. An impeccable example, it should sell for a winning bid of £50,000 – £80,000