Rolls-Royce’s incoming boss faces a long list of challenges as the aircraft engine maker tries to bounce back from its painful experience during the Covid-19 pandemic.

Tufan Erginbilgic, a former BP executive, is due to take over running of the FTSE 100 group in January with an initial pay packet worth almost £9million.

He will replace Warren East, who yesterday gave his final results announcement as boss of the jet-engine maker.

His stint at the top has been dominated by crisis-fighting, first with engine problems and then with the pandemic.

The half-year results were no different, missing analyst expectations, with the company reporting a profit of £125million, down from £307million a year ago.

Rolls has been hard hit by the slow recovery of the airline industry from the pandemic as international restrictions on travel have remained in some regions.

East, 60, said that in the first half of 2022 Rolls-Royce engines flew about 60 per cent of the hours they flew in 2019, the year before the pandemic, and were now at about 65 per cent of that level.

Covid-19 lockdowns in China had been the ‘key retardant for the Rolls-Royce fleet of engines,’ East said. The company expects flying hours to recover to pre-pandemic levels by 2024.

The only silver lining in the results was the group’s cash burn, which dropped to £68million in the first half from nearly £1.2billion last year.

East remained defiant saying he was ‘very pleased with the progress’ the company had made adding that he would leave Rolls-Royce ‘a leaner, agile organisation with a more modern culture’.

Perhaps most worryingly for his successor, Rolls also admitted it was having problems hiring experienced, highly-skilled engineers. 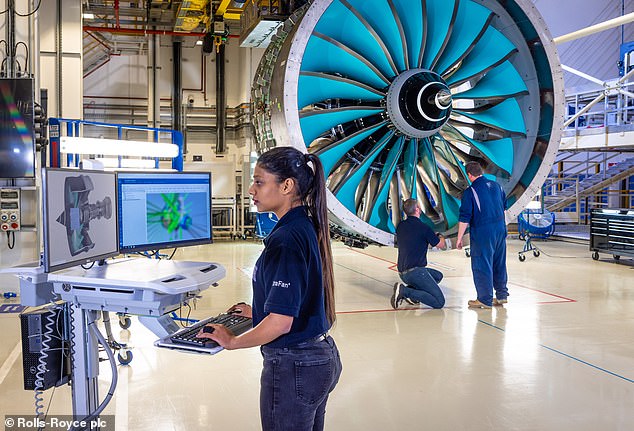 Andy Chambers, industrials analyst at research house Edison, said one factor behind Rolls’s struggles to recruit could be the pandemic-induced downturn in the airline industry, which may have made a long-term career in the sector ‘seem less attractive’ than other areas such as electric vehicles.

He added that Rolls was also dealing with international competition and ‘work permits and visas’ could turn off potential hires.

But these difficulties do not seem to be shared by rivals with BAE Systems reported last week to be planning to hire 1,000 engineers over the next 12 months in a push to help build the supersonic Tempest fighter jet.

In contrast to Rolls-Royce, aerospace group Meggitt reported a strong rise in first-half profits amid a recovery in demand from passenger airlines.

The FTSE 100 firm posted a profit of £78.6million for the six months to the end of June, up 27 per cent year-on-year. Revenues, meanwhile, climbed to £821million from £680million last year.

Meggitt flagged a 30 per cent rise in revenues from its civil aerospace business in the first half as the passenger aircraft market saw demand surge back from its pandemic lows.

Despite the strong results, chief executive Tony Wood said the firm was mindful of ‘challenges’ facing the industry including supply chain disruption and the rising cost of labour and materials which was hampering its ability to capitalise on the rebound in the airline industry.

The results came as Meggitt prepares to be taken over by US rival Parker-Hannifin later this year after a controversial £6.3billion deal was approved by investors despite opposition from politicians.