Car dealership chain Inchcape has announced a deal to offload its business in Russia following the country’s full-scale invasion of Ukraine.

The London-listed firm, which celebrates its 175th anniversary this year, said that local management in Russia had agreed to pay €76million (£63million) to take over the business.

Completion of the deal is anticipated to close next month, and will see payment of the acquisition price deferred and made in annual instalments over a five-year period.

Big Brands: Inchcape’s Russian business consists of retail-only operations for some of the world’s most famous car brands, such as Jaguar Land Rover, BMW and Toyota

However, it expects to record a pre-tax loss of around £240million from the transaction, with £140million deriving from foreign exchange translation losses.

Inchcape declared its intention to leave Russia on 15 March when it stated that owning business interests in the country was ‘no longer tenable’ given the conflict in Ukraine and the worsening humanitarian situation that has resulted.

Its Russian division consists of retail-only operations for some of the world’s most famous car brands, such as Jaguar Land Rover, BMW and Toyota, and was responsible for around £740million, or 10 per cent, of its total revenue last year.

The firm had previously run Toyota and Audi dealerships in St. Petersburg before selling those operations for £70million in April 2021 as part of a move towards boosting its automotive distribution operations and reducing its reliance on retail.

Yet while the departure from Russia will cause a financial hit for the business, Inchcape revealed an upgraded forecast today as high demand for vehicles in short supply boosted sale prices.

As a consequence, reported revenue in the first three months of 2022 grew by 6 per cent, with its distribution division experiencing 9 per cent growth, while total organic sales increased by 13 per cent. 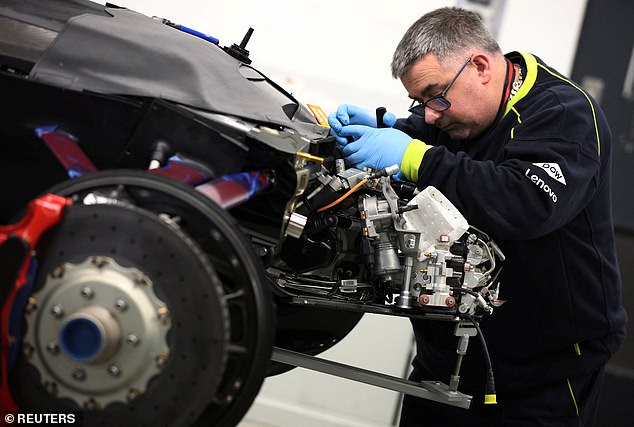 Quieter month: Industry trade body The Society of Motor Manufacturers and Traders (SMMT) revealed today that car production in the UK plummeted by a third in March

Pre-tax profits of ‘at least’ £300million are now expected for this financial year, compared to ‘around’ £300million previously, a jump of a quarter on last year.

Strong sales expansion was noted by the group in multiple markets, including the UK, despite the low supply of vehicles, the Americas, Africa, and Australasia, where there was a ‘robust’ performance in the aftermarket division.

‘So far in 2022, we have experienced a continuation of the trends from last year, with demand ahead of supply, and high margins. We expect this trend will continue for at least the remainder of the year,’ the company remarked.

Inchcape shares rose 6.4 per cent to 708.5p on Thursday, although their value has still fallen by more than 20 per cent in the past three months.

Inchcape’s trading update comes on the same day that car production in the UK was revealed to have plummeted by a third last month, according to industry trade body The Society of Motor Manufacturers and Traders (SMMT).

British factories only produced 76,000 automobiles in March, the worst figure for that month since the global financial crisis in 2009, which the SMMT blamed on a shortage of chips, the Ukraine war, and increasing energy costs.