Immigration from non-EU countries hit 404,000 in 2019 – the highest level since records began 45 years ago driven by a rise in foreign students

Immigration into the UK from outside the EU in 2019 rose to the highest level since records began almost half a century ago, new figures reveal today.

Net immigration in to Britain last year was 270,000, the Office for National Statistics said, posting a snapshot of the post-coronavirus world that no longer exists.

The surge in non-EU immigration was driven by an increase in Chinese and Indian students arriving in Britain, the ONS said.

It comes as the Government’s Immigration and Social Security Co-ordination Bill makes its way through Parliament.

It aims to introduce an ‘Australian-style’ points system from next year and end free movement for EU citizzens coming to Britain and visa versa.

Under the proposals, everyone coming to Britain to work or study will require a visa.

Matthew Fell, the CBI’s chief UK policy director, said: ‘Today’s figures feel like a glimpse of the past. They present a stark contrast to the situation today. 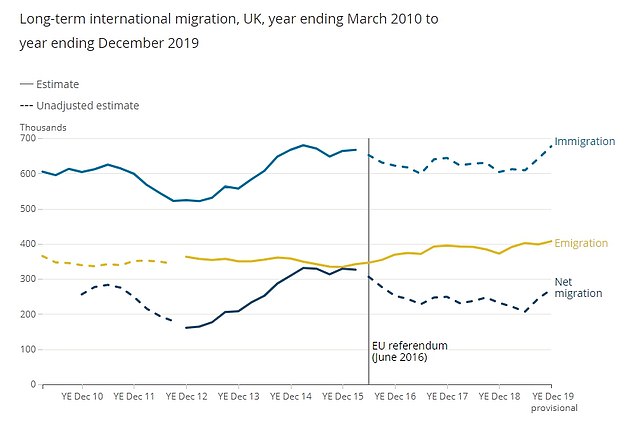 ‘The new immigration system will come into a changed world. All businesses are currently prioritising safety and protecting jobs during this period of unprecedented stress.

The number of international students granted visas to study in the UK has hit another record high but applications dipped as the coronavirus pandemic took hold.

In the year to March there were 299,023 sponsored study visas granted, including those for children of applicants.

Chinese nationals were the most common nationality granted the visas, accounting for 40 per cent of the total. This was up 18 per cent compared with the previous period to 118,530.

‘For now, some businesses are less likely to hire from overseas than before the crisis. But many others will need to access the new immigration system to help grow the UK economy and have little capacity to prepare for it.

‘Time is running out if government and business are to implement this well. The details of the new system must be published soon so that all stakeholders can have a pragmatic conversation about the time it will take to implement.’

Net migration from outside the EU, the balance between the number of people entering and leaving the country, is also at its highest level (282,000) since citizenship information was first collected in 1975, having gradually risen since 2013.

Jay Lindop, director of the Centre for International Migration at the ONS, said: ‘Overall migration levels have remained broadly stable in recent years, but new patterns have emerged for EU and non-EU migrants since 2016.

‘For the year ending December 2019, non-EU migration was at the highest level we have seen, driven by a rise in students from China and India, while the number of people arriving from EU countries for work has steadily fallen.

‘We know the coronavirus pandemic has had a significant impact on travel since December and new analysis today shows how international travel to and from the UK has decreased in recent months.’

The figures are classed as experimental estimates after the ONS admitted last year it had underestimated some EU net migration data in 2016/17.

Liberal Democrat Home Affairs spokeswoman Christine Jardine said: ‘Now more than ever, we should be celebrating the enormous contributions that workers from all over the world make to our NHS and social care.

‘We should welcome those who want to come here and be part of rebuilding Britain. But the nasty rhetoric from Priti Patel and her Conservative colleagues has made too many EU citizens feel unwelcome in the UK.

‘That is both shameful and hugely damaging to our economy, our society and our public services. With the NHS facing a shortage of 40,000 nurses and social care also badly understaffed, we desperately need to be able to recruit people from elsewhere in Europe.’