The International Monetary Fund has laid out the unprecedented economic devastation caused by the coronavirus pandemic, sharply lowering its forecast for global growth this year.

The IMF said on Wednesday that this ‘crisis like no other’ would send the global GDP plunging by 4.9 percent this year and wipe out an astonishing $12 trillion over two years.

That is significantly worse than the 3 percent drop it had estimated in its previous report in April.

The IMF said that the global economic damage from the recession will be worse than from any other downturn since the Great Depression of the 1930s. 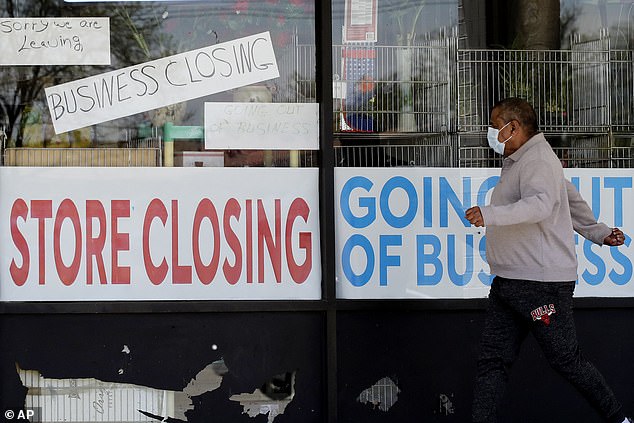 A man looks at signs of a closed store due to COVID-19 in Niles,Illinois last month. U.S. layoffs surged in April revealing the deep economic hole caused by the pandemic and lockdowns

The report says that the drop-off in economic activity ‘comes with a catastrophic hit to the global labor market,’ forecasting that the equivalent of 300 million jobs will be wiped out worldwide in the second quarter.

For the United States, it predicts that the nation´s gross domestic product – the value of all goods and services produced in the United States – will plummet 8 percent this year, even more than its April estimate of a 5.9 percent drop.

That would be the worst such annual decline since the U.S. economy demobilized in the aftermath of World War II.

China, however, is expected to fare much better, with the world’s second-largest economy projected to see growth of 1 percent this year. China is the only country the IMF forecasts growth for this year, after the country was able to emerge from lockdown quickly in the first quarter.

The IMF issued its bleaker forecasts Wednesday in an update to the World Economic Outlook it released in April. 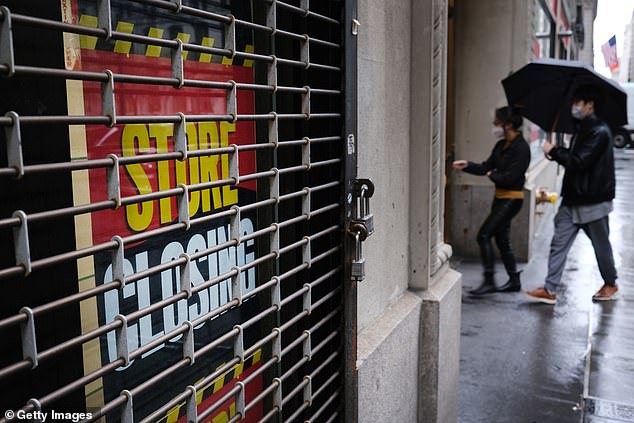 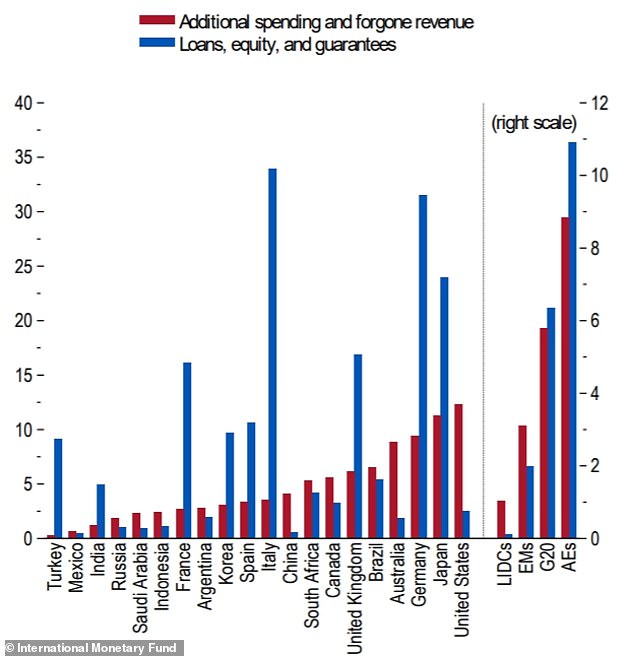 This chart shows fiscal measures by country to address the crisis, as a percent of GDP

The update is generally in line with other recent major forecasts. Earlier this month, for example, the World Bank projected that the global economy would shrink 5.2 percent this year.

‘This is the worst recession since the Great Depression,’ Gita Gopinath, the IMF’s chief economist, told reporters at a briefing. ‘No country has been spared.’

The IMF noted that the pandemic was disproportionately hurting low-income households, ‘imperiling the significant progress made in reducing extreme poverty in the world since 1990.’

In recent years, the proportion of the world´s population living in extreme poverty – equivalent to less than $1.90 a day – had fallen below 10 percent from more than 35 percent in 1990.

However, the IMF said the COVID-19 crisis threatens to reverse this progress. It forecast that more than 90 percent of developing and emerging market economies will suffer declines in per-capita income growth this year.

For 2021, the IMF envisions a rebound in growth, so long as the viral pandemic doesn’t erupt in a second major wave. It expects the global economy to expand 5.4 percent next year, 0.4 percentage point less than it did in April.

For the United States, the IMF predicts growth of 4.5 percent next year, 0.2 percentage point weaker than in its April forecast.

That gain wouldn’t be enough to restore the U.S. economy to its level before the pandemic struck.

The association of economists who officially date recessions in the United States determined that the economy entered a recession in February, with tens of millions of people thrown out of work from the shutdowns that were imposed to contain the virus. 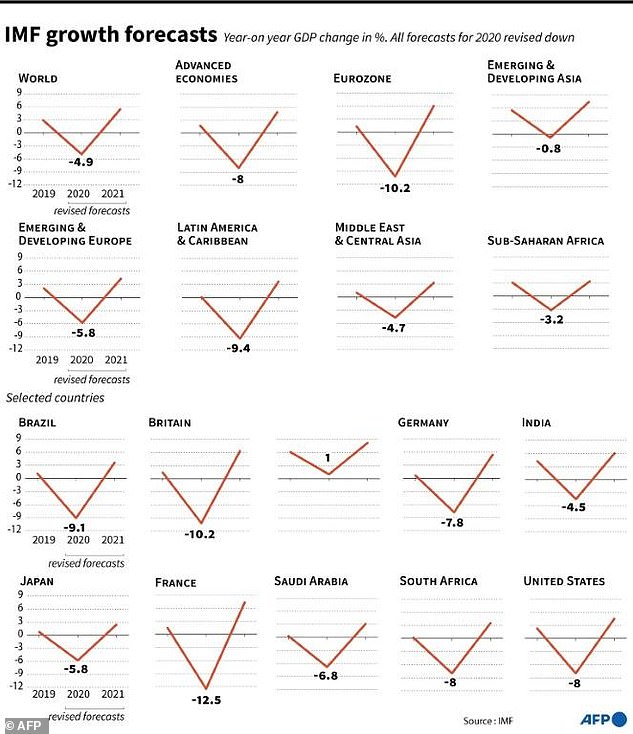 The U.S. government has estimated that the nation´s GDP shrank at a 5 percent annual rate in the January-March quarter, and it is widely expected to plunge at a 30 percent rate or worse in the current April-June period.

In its updated forecast, the IMF downgraded growth for all major countries. For the 19 European nations that use the euro currency, it envisions a decline in growth this year of 10.2 percent – more than the 8 percent drop it predicted in April – followed by a rebound to growth of 6 percent in 2021.

India´s economy is expected to shrink 4.5 percent after a longer period of lockdown and a slower recovery than was envisioned in April.

In Latin America, where most countries are still struggling to contain infections, the two largest economies, Brazil and Mexico, are projected to shrink 9.1 percent and 10.5 percent, respectively.

A steep fall in oil prices has triggered deep recessions in oil-producing countries, with the Russian economy expected to contract 6.6 percent this year and Saudi Arabia´s 6.8 percent.

The IMF cautioned that downside risks to the forecast remain significant. It said the virus could surge back, forcing renewed shutdowns and possibly renewed turmoil in financial markets similar to what occurred in January through March.

The IMF warned that such financial turbulence could tip vulnerable countries into debt crises that would further hamper efforts to recover.

It’s updated forecast included a downside scenario that envisions a second major outbreak occurring in early 2021. Under this scenario, the global economy would contract again next year by 4.9 percent, it estimates.