An imam who backed calls for cinemas to cancel a ‘blasphemous’ Islamic film has been sacked a Government advisor on anti-Islamophobia.

Qari Asim, the head imam at the Makkah mosque in Leeds, was let go from his roles as independent adviser on Islamophobia and deputy chairman of the Anti-Muslim Hatred Working Group on Saturday.

It comes after he endorsed a campaign for cinemas to pull screenings of The Lady of Heaven – a film about the daughter of the Prophet Muhammad.

The £12million movie was released in the UK over the Jubilee weekend, but was axed by Cineworld and, a day later, Showcase when staff faced crowds of protesters outside venues in Bradford, Bolton, Birmingham and Sheffield.

Mr Asim described The Lady of Heaven as a ‘disparaging movie’ that has ’caused much pain and hurt to Muslims’, The Telegraph reports.

But in a letter published on Saturday, the Department of Levelling Up wrote: ‘We have no option but to withdraw the appointment and end your roles with Government with immediate effect.

‘Your recent support for a campaign to limit free expression – a campaign which has itself encouraged communal tensions – means it is no longer appropriate for you to continue your work with Government in roles designed to promote community harmony.

Qari Asim, the head imam at the Makkah mosque in Leeds, has been let go from his official Government role 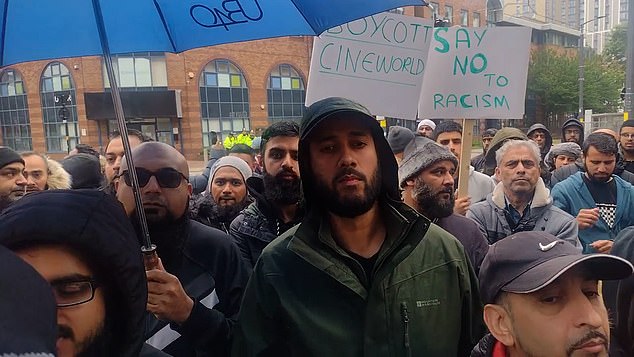 Protesters gathered at cinemas to voice opposition to the Lady of Heaven, which was officially released in the UK on June 3 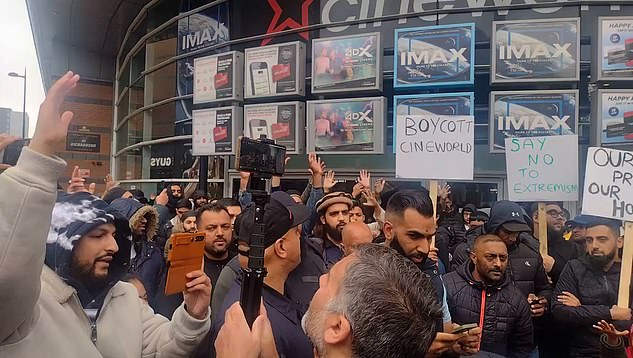 Cineworld cancelled all showings of the film nationwide ‘to ensure the safety of our staff and customers’. Pictured: A crowd of protesters gathered outside the Cineworld in Birmingham on Sunday, June 5, to protest the film’s release 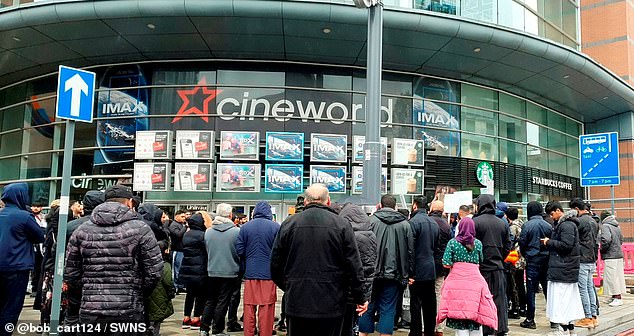 Cinemas have seen protests from Muslims claiming the film The Lady of Heaven is ‘blasphemous’. Pictured: Birmingham 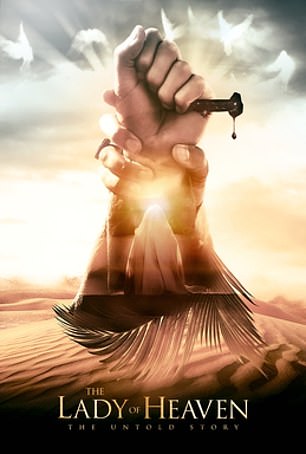 Why The Lady Of Heaven so controversial? How film touches on tensions between Sunnis and Shias

Controversial film Lady of Heaven has been banned from some cinemas in the UK after hundreds of Muslims protested against it. Large crowds appeared outside cinemas in Bradford, Bolton, Birmingham and Sheffield in recent days to call for the film to be pulled from theatres.

The film and its creators have been accused of blasphemy for depicting Prophet Muhammad and his daughter Fatima. Most schools of Islam ban any depiction of the prophet as they believe it to be against the spirit of the religion, disrespectful and encouraging of the worship of idols.

The film has also been accused of inciting hatred between different sects in Islam. Created by Shias, it was nonetheless banned in Shia-majority Iran with the government saying it was aimed at dividing Muslims. The Sunni sect, which makes up 90 per cent of the global Muslim population, have accused the film’s creators of deliberately depicting an extremist Shia perspective of Islamic history to create tension.

Sunni Muslims are unhappy at the way that some of Islam’s holiest figures are portrayed in the film, including the prophet’s third wife Aisha and two of his closest companions. Abu Bakr and Omar, who were the first two caliphs and are seen as two of the holiest figures among Sunnis, are depicted as deceitful, conniving and dishonest – characterisation that has caused significant anger among Sunnis.

Another complaint has been about how the companions, and Aisha, were portrayed by black actors, leading to accusations of racism. 5Pillars, an Islamic Media organisation, said: ‘Most Muslims will find the invective against three of the most beloved companions of the Prophet Muhammad (pbuh) shocking and disgusting. But it is also a deeply racist film with all the main negative characters being portrayed by black actors. What’s more, the film directly disrespects the Prophet (pbuh) by showing his face.’

There is also anger at the writer of the film, Sheikh Yasser al-Habib, who is a controversial figure in the Muslim world. A Kuwaiti Shia scholar based in London, he has previously angered Sunni Muslims by calling Aisha, the third wife of the Prophet Muhammad, ‘an enemy of God’. The cleric was previously jailed in Kuwait and had his citizenship stripped. Senior Iranian clerics have described him as a ‘mad man’ and accused him of inflaming tensions between Sunnis and Shia.

Executive producer Malik Shlibak said the film had gone to great lengths not to offend Muslims, adding that he was aware the movie was including characters that are ‘very holy for close to two billion people’.

It continued: ‘You will have no doubt seen reports of the scenes outside different cinema venues. These included deeply disturbing videos of sectarian chanting and anti-Shia hatred… which must be challenged at every opportunity as part of a wider effort to combat anti-Muslim hatred.

‘We were disappointed to see that you failed to condemn some of the protests complicit in these behaviours.’

The film has been at the centre of a debate over freedom of speech, with Health Secretary Sajid Javid this week describing the cancellations were ‘an incredibly dangerous road to go down’.

And Mr Asim’s statement also conflicted with the views of the Government’s independent adviser on social cohesion and resilience, Dame Sara Khan.

She criticised the failure of authorities to stand up to the protests after Cineworld became the first chain to cancel screenings over staff safety fears.

Mr Asim added: ‘We have been working with many brothers and imams across the country to liaise with the cinemas.

‘As a community, in some places we have been successful and those cinemas will no longer be showing the movie, in other places negotiations are still ongoing.

‘Some imams have taken a view to protest and others are in dialogue with the cinemas trying to resolve the situation. Different approaches, rooted in our universal values, are necessary, as always.’

Mr Asim was appointed to his advisory role a day before Boris Johnson became Prime Minister in 2019.

In January, he said he had been ignored by Mr Johnson and Levelling Up Secretary Michael Gove since starting the role.

The film and its creators have been accused of blasphemy for depicting Prophet Muhammad and his daughter Fatima.

Most schools of Islam ban any depiction of the prophet as they believe it to be against the spirit of the religion, disrespectful and encouraging of the worship of idols.

Made in Britain, the film opens with the invasion of Iraq by ISIS and features a graphic jihadist murder, before telling the story of Lady Fatima, one of the daughters of the founder of Islam.

But protesters have accused the filmmakers of inaccurately depicting religious history and negatively portraying three of Islam’s most important figures.

However, speaking to TalkTV, Mr Javid said: ‘I am very concerned about the growing cancel culture in this country. There’s people out there who think they have a right not to be offended and of course, no-one has that right.

‘You might not like what someone’s got to say, but they have a right to say it.’

He also highlighted that there is no blasphemy law in the UK, saying: ‘What we have in this country is freedom of speech and expression and that is a fundamental value.’

Vue is defiantly continuing to show the film, saying it ‘takes seriously the responsibilities that come with providing a platform for a wide variety of content’ and believes in showcasing films of interest to diverse communities’.

The movie’s executive producer, Malik Shlibak, called the decision of Cineworld and Showcase to pull it ‘unacceptable’ and accused the chains of ‘bowing down to radical extremists’.

He revealed he had received messages from activists telling him ‘I’m going to kill you’ on Twitter.

But he said he wasn’t scared by the threats, which included him being called an ‘infidel’, an offensive term relating to someone who is unfaithful to their own religion.

And he added the massive controversy surrounding its screenings had been ‘brilliant’ for the film and had brought in ‘huge audiences’.

‘It’s nothing new because I’m involved in this type of work where these radicals don’t what you to speak about anything they don’t agree with. I don’t worry about it – it’s just empty threats.

‘But I have had threats on Twitter now, being called an ‘infidel’ and with people saying, ‘I’m going to kill you’ and all this sort of thing.’