These innocent victims were among around 1.1million people murdered by the Nazis at Auschwitz-Birkenau, near the town of Oswiecim, in what was then occupied Poland.

The victims at Auschwitz were among 6million Jews who were murdered by Adolf Hitler’s forces between 1941 and 1945. Their lives are commemorated today on Holocaust Memorial Day.

The rare photos taken at Auschwitz by Hitler’s SS guards show not only the arrival of Hungarian Jews at the camp – on rail tracks built specifically in 1944 for the extermination operation – but the long queues as they waited to walk to gas chambers.

In less than three months in the summer of 1944, nearly 400,000 Hungarian Jews were murdered in a ruthless production line system of horror.

The images of are revealed in upcoming book Hitler’s Death Camps in Occupied Poland – Rare Photographs from Wartime Archives, written by military historian Ian Baxter and published by Pen & Sword.

Speaking to MailOnline on what is also the 76th anniversary of the liberation of the camp by Soviet forces in 1945, Mr Baxter branded Auschwitz a ‘factory of death’ and said the camp is a ‘monument and a testimony to the tragedy of what happened.

‘It is a foundation to the future to warn others of what can happen,’ he added.

Their faces etched with fear, Jewish children and mothers from carrying toddlers walk unknowingly to their horrendous fate. The above victims, from Hungary, were among 1.1million people murdered by the Nazis at the Auschwitz-Birkenau camp between 1942 and late 1944. Of those, 400,000 Hungarian Jews were murdered in the space of less than three months in the summer of 1944, the above women and children among them. They are pictured walking to the gas chambers 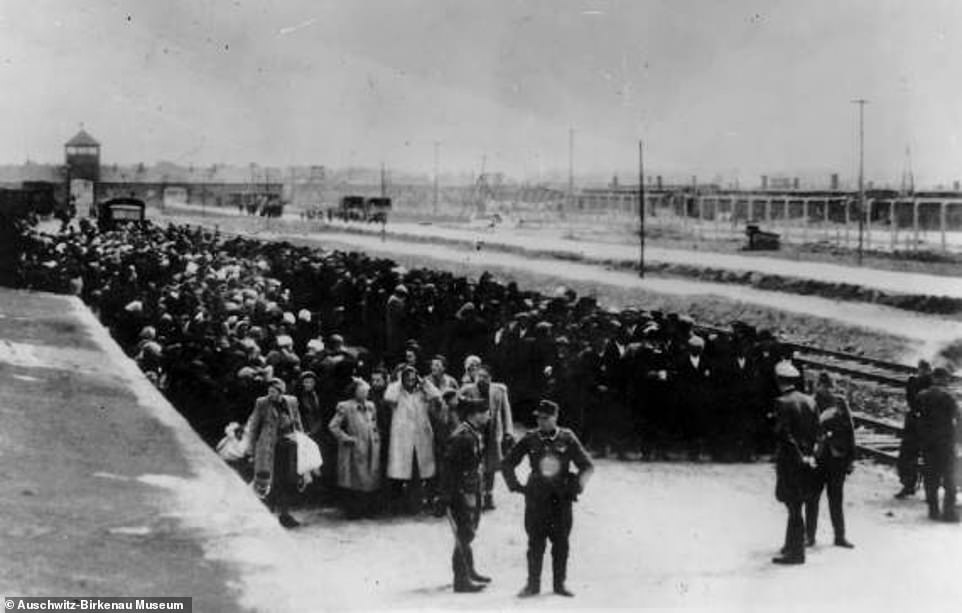 The rare photos taken at Auschwitz by Hitler’s SS guards show not only the arrival of Hungarian Jews at the camp – on rail tracks built specifically in 1944 for the extermination operation – but the long queues as they waited to walk to gas chambers. The above photo shows SS guards standing in front of a long queue of people who had been selected for death, rather than work. 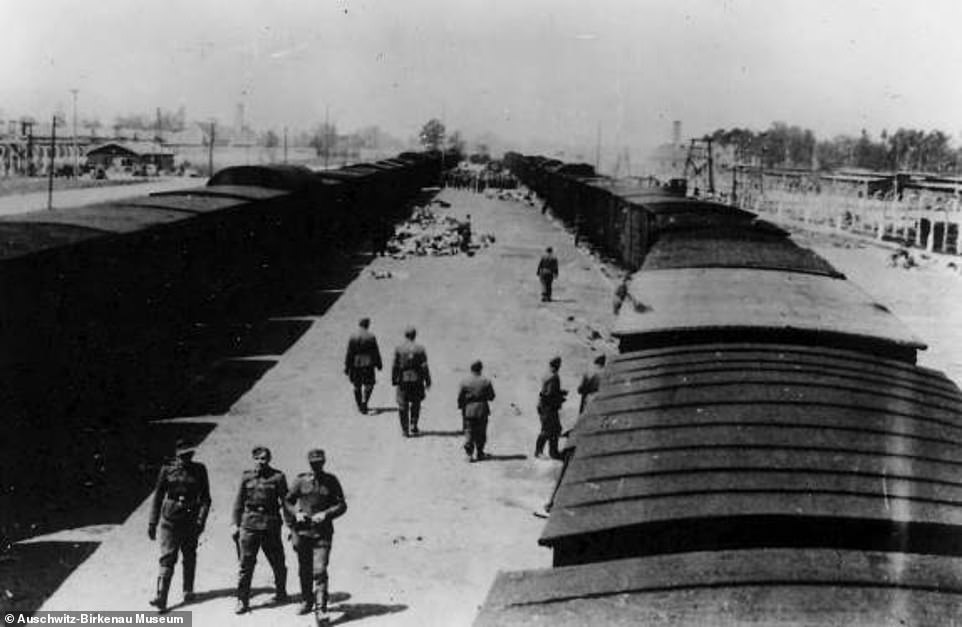 In less than three months in the summer of 1944, nearly 400,000 Hungarian Jews were murdered in a ruthless production line system of horror. The above photo shows stationary trains which transported the Jews to the camp. In the foreground are SS guards. Behind them are piles of belongings. In the distance – to the left and right of the two trains – are the chimneys of the crematoria where the bodies of murdered victims were incinerated 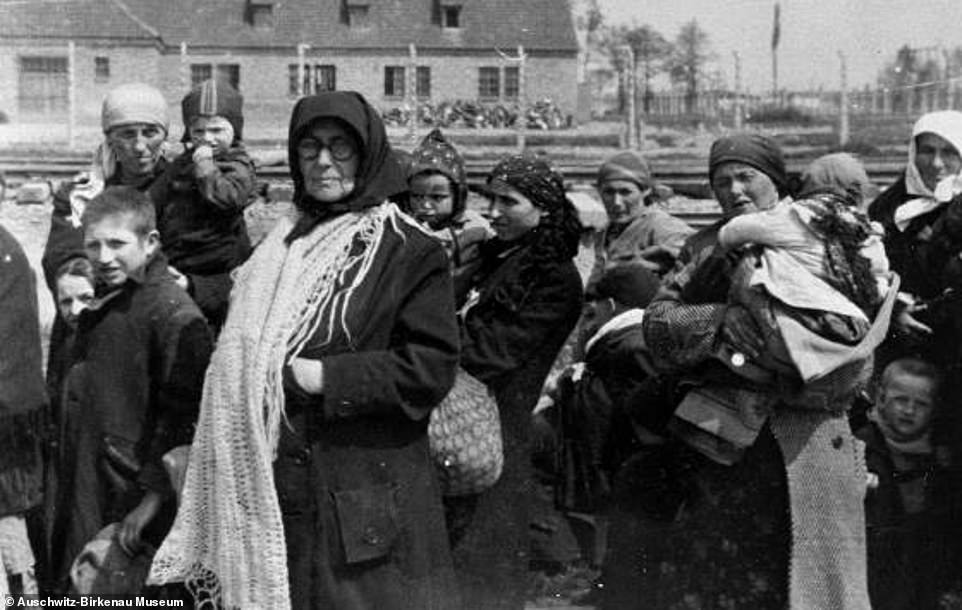 Jewish women and children who have been selected for death at Auschwitz-Birkenau stare at the camera as they walk towards the gas chambers in 1944. The building behind them is one of the crematoriums at the camp. The building in the background is Crematorium III. In May of that year, an average of 3,300 Hungarian Jews arrived each day 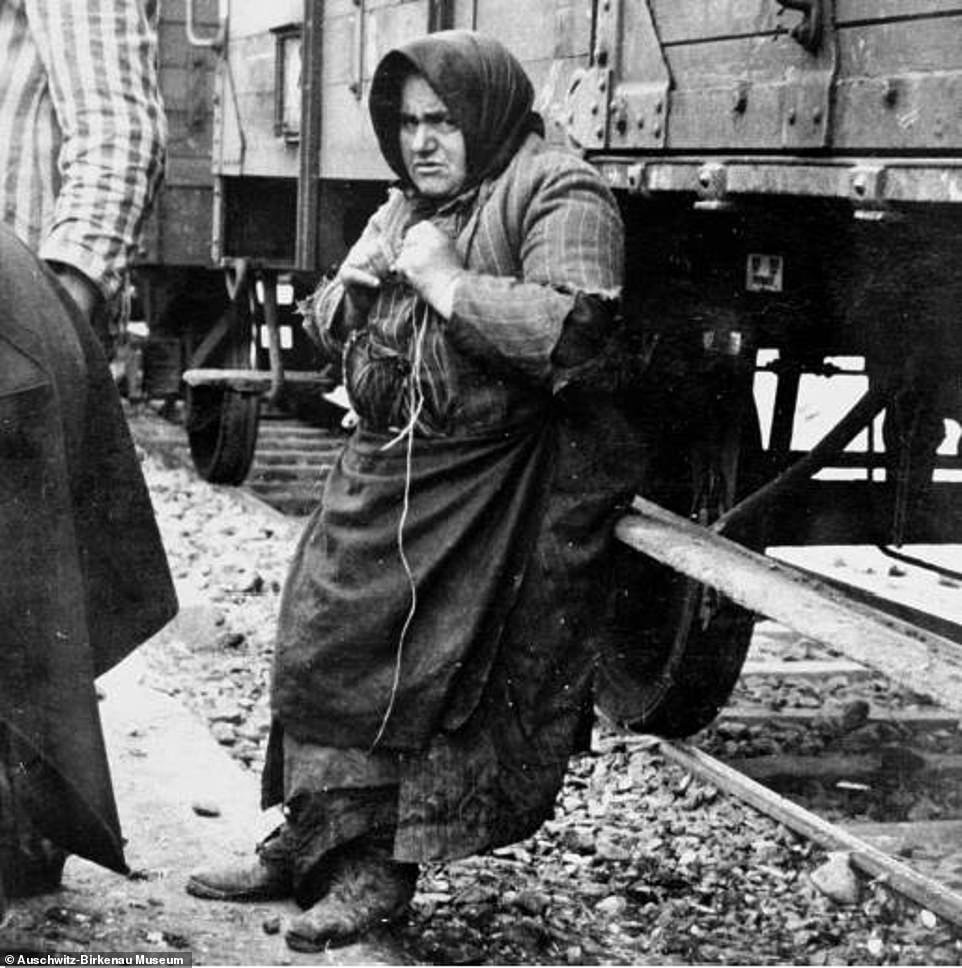 Babo Batren, an elderly Jewish woman from Tecso labour camp, leans against the train which brought her to Auschwitz. She is waiting to be taken to the gas chambers 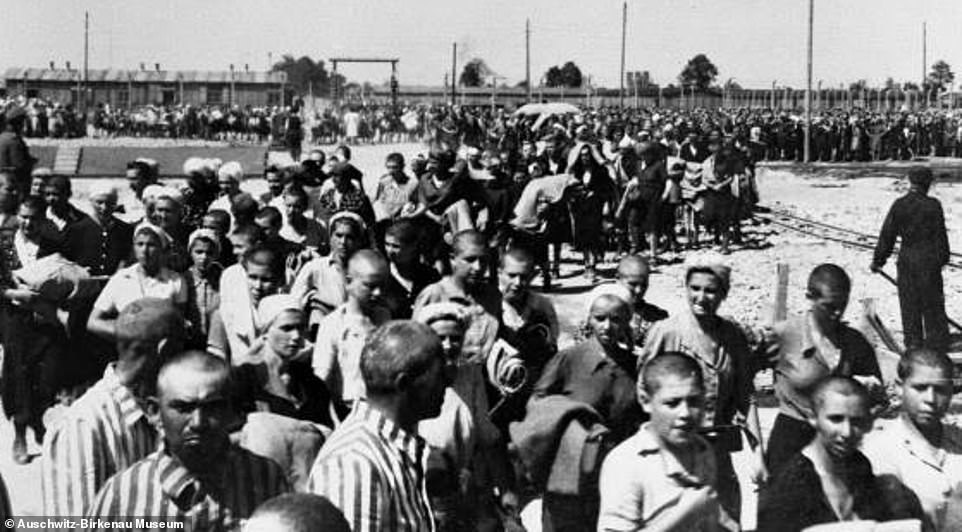 On arrival in the camp, prisoners who were not immediately selected for death were taken to be processed. This involved having their heads shaved, being disinfected and showered and having to wear striped uniforms. The above photo shows female prisoners after leaving the camp sauna 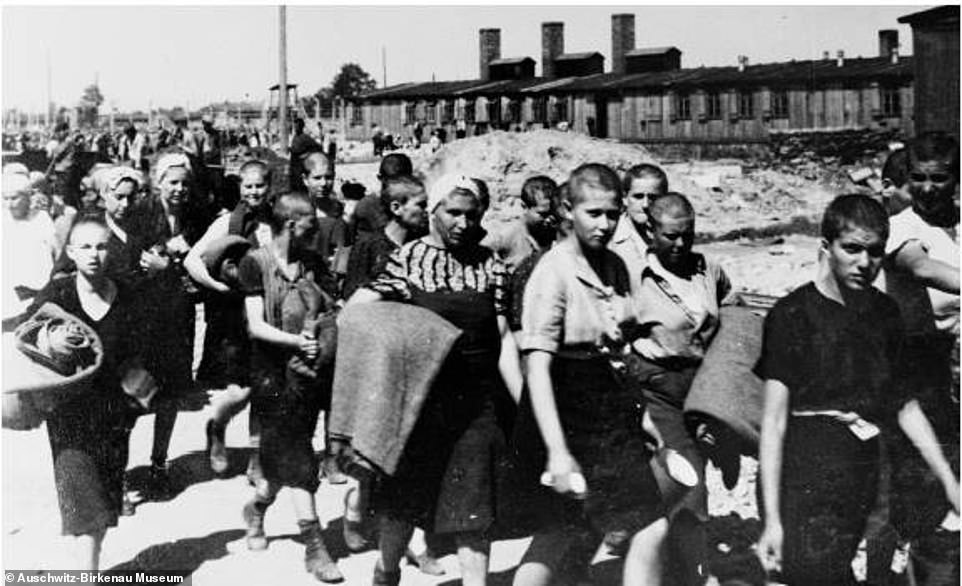 After their showers, the prisoners were taken to their designated barracks with a blanket for their bunk. The women had lost the last symbols of their individuality. They now all looked alike 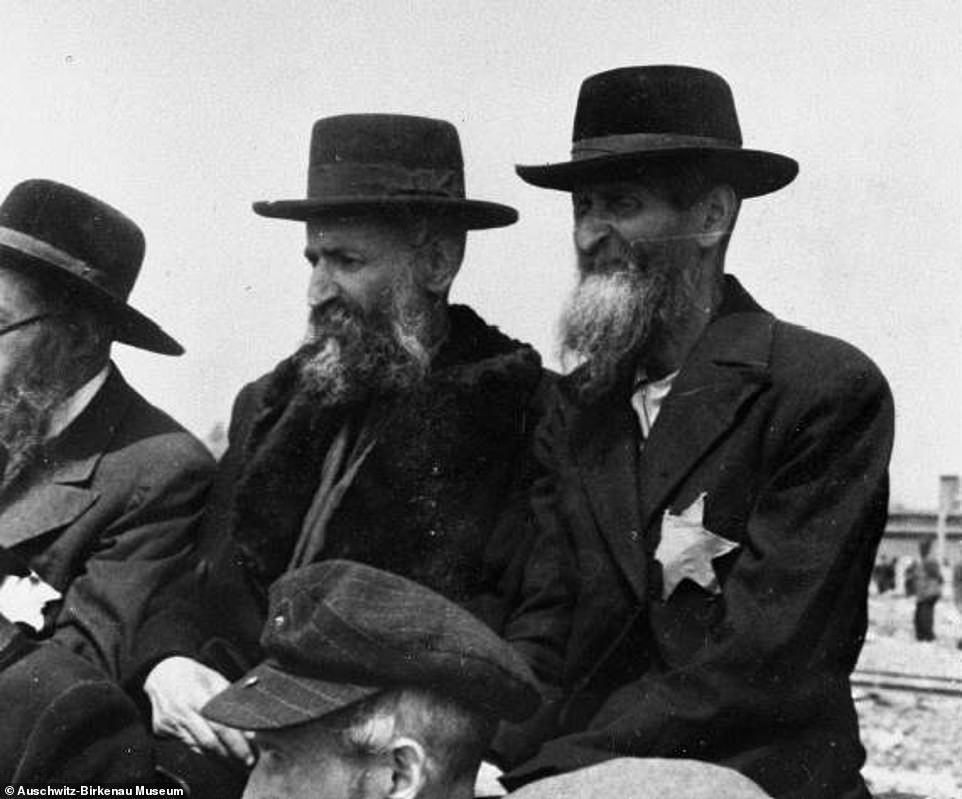 A group of Orthodox Jewish men – one of whom is wearing the makeshift star of David which Jews were forced to wear to distinguish them from other citizens – after arriving at Auschwitz-Birkenau in 1944. Soon after this picture was taken, the men would have been forced to give up their clothes, beards and hats 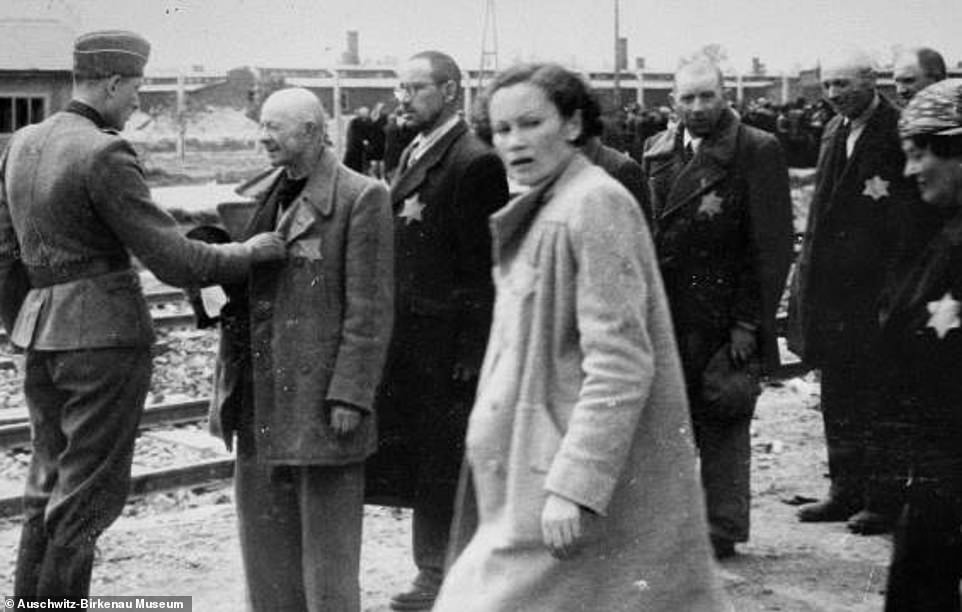 A Jewish woman wearing a long coat looks over her shoulder as Jewish men await selection after arriving at Auschwitz-Birkenau. One man is seen standing as an SS guard holds the lapel of his coat. Behind him, four other men wait to be inspected by the guard 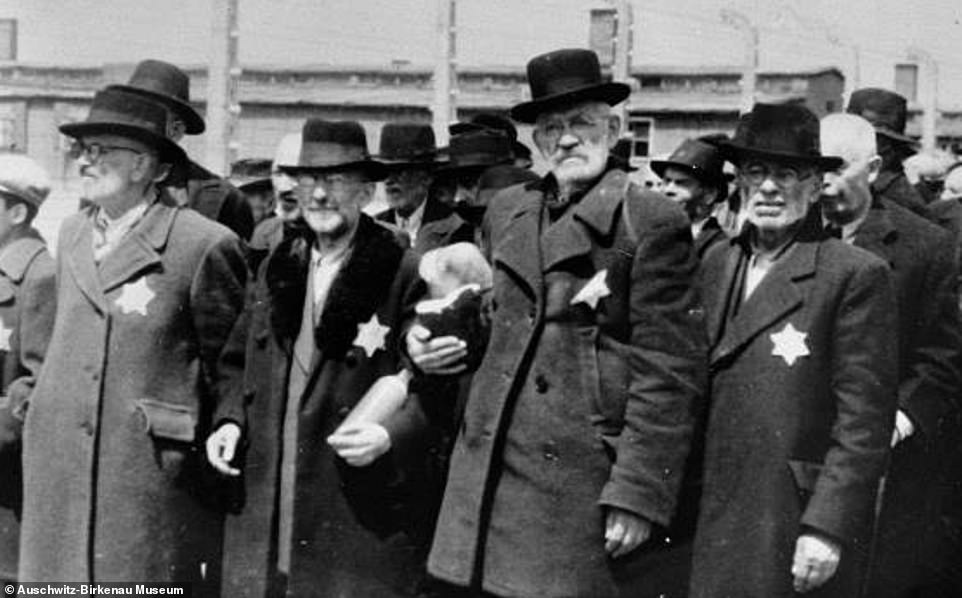 The images of are revealed in upcoming book Hitler’s Death Camps in Occupied Poland – Rare Photographs from Wartime Archives, written by military historian Ian Baxter and published by Pen & Sword. Pictured: Four Jewish men stand side by side shortly after arriving at Auschwitz-Birkenau 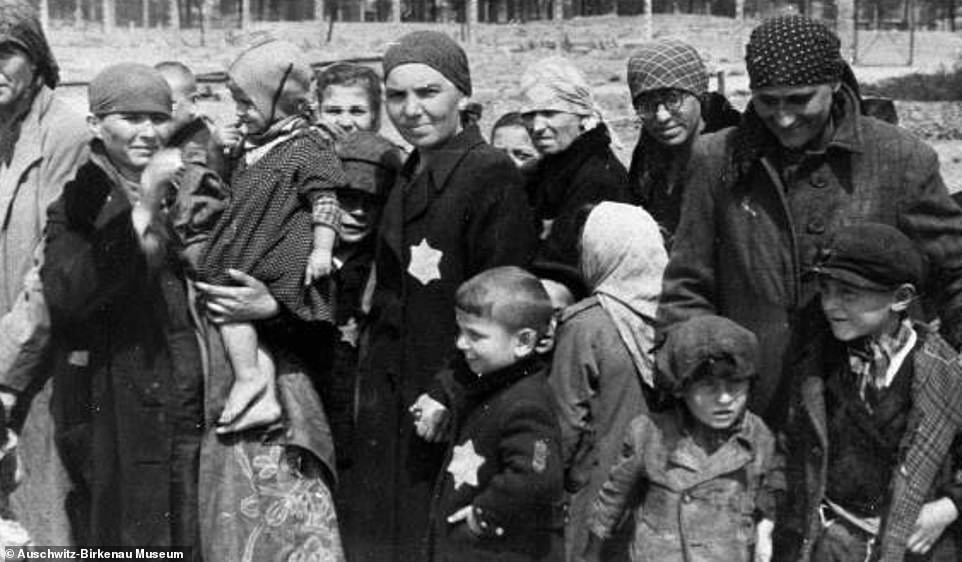 These Hungarian Jewish women and children are seen looking at the camera as their picture is taken. To the right, a mother can be seen smiling down at her children. In the centre of the image, a mother clutches her child’s hand. These people had been selected for death, rather than work, after arriving at Auschwitz-Birkenau 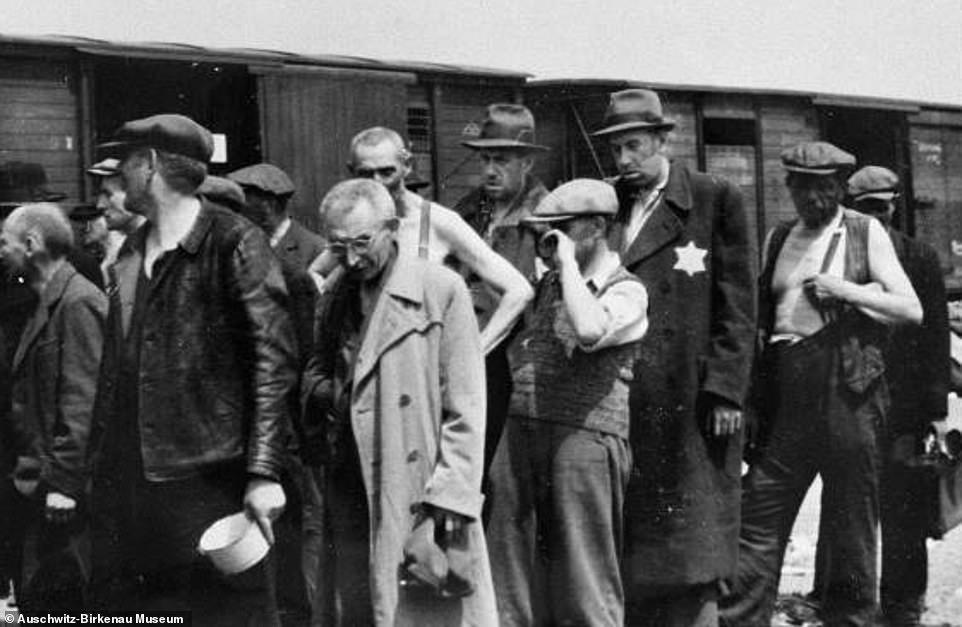 Jewish men from Hungary await selection on the ramp at Auschwitz-Birkenau shortly after arriving in 1944. Those who were too old or too ill to work would have been directed towards the gas chambers. Auschwitz-Birkenau was originally used to house political prisoners but was later handed over to the infamous SS 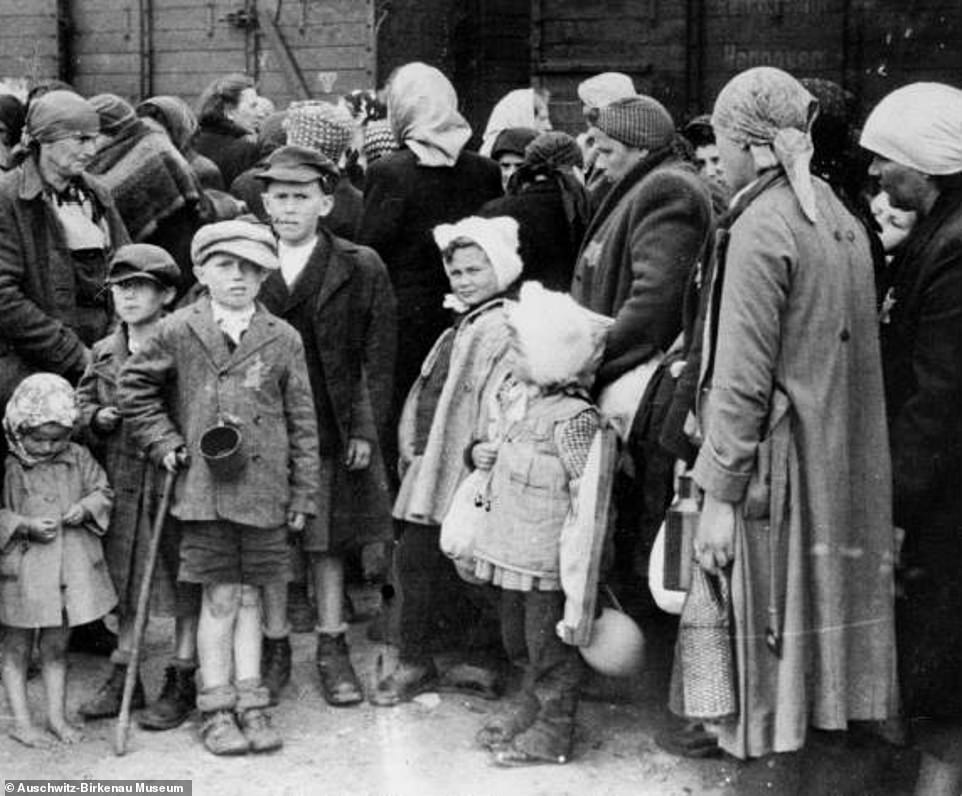 Jewish women and children from Hungary await selection after arriving at Auschwitz-Birkenau on freight trains. To the left, a little girl can be seen in bare feet as she stares nervously at the floor. At the front, a little boy wearing a cap is seen leaning on a wooden crutch 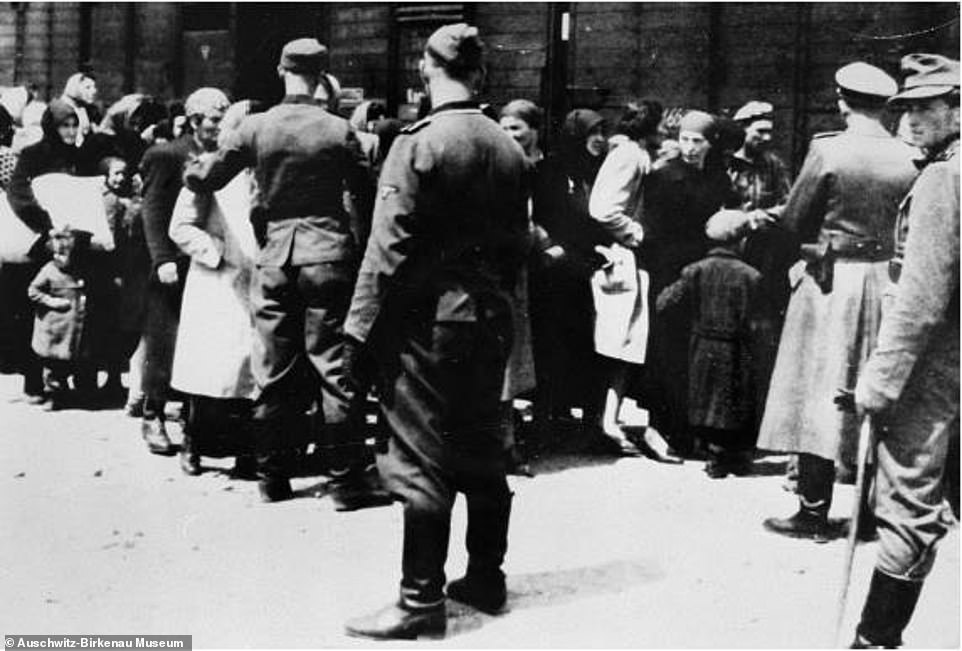 SS guards are seen supervising the arrival of a transport of Hungarian Jews shortly after their arrival at Auschwitz-Birkenau. Pictured far right is SS member Stefan Baretzki. He was conscripted into the SS and stationed at Auschwitz between 1942 and 1945. Author Mr Baxter said Baretzki ‘participated in mass murder by making selections, and was unrestrained in his beating of prisoners’ 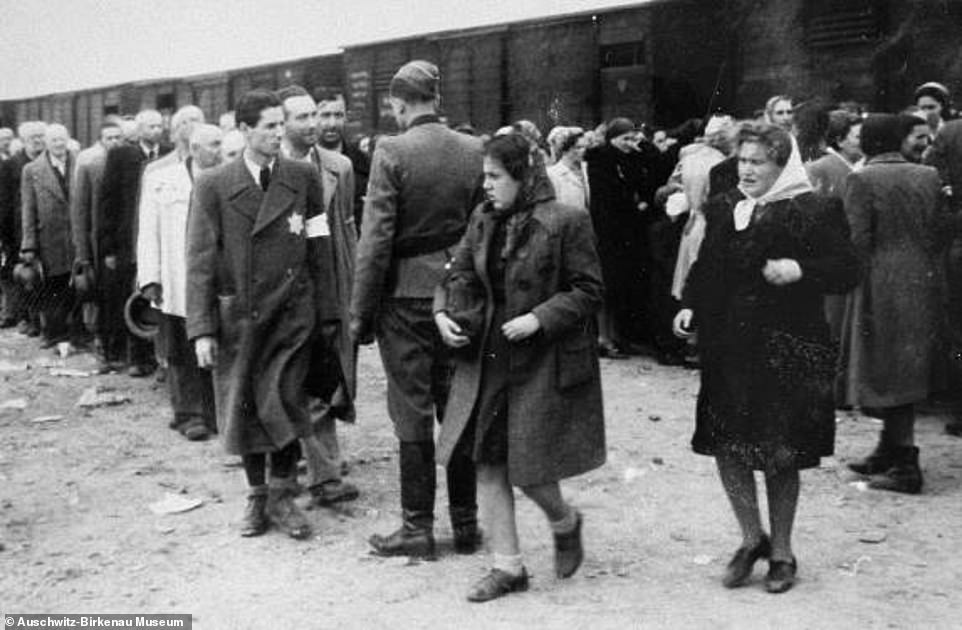 Two Jewish women wearing headscarves and coats walk gingerly in front of an SS guard shortly after arriving at Auschwitz-Birkenau. Behind them, an SS guard is seen standing at the head of a queue of Jewish men who are waiting to be inspected Those deemed fit to work were taken to be admitted into the camp, the rest were sent to be gassed 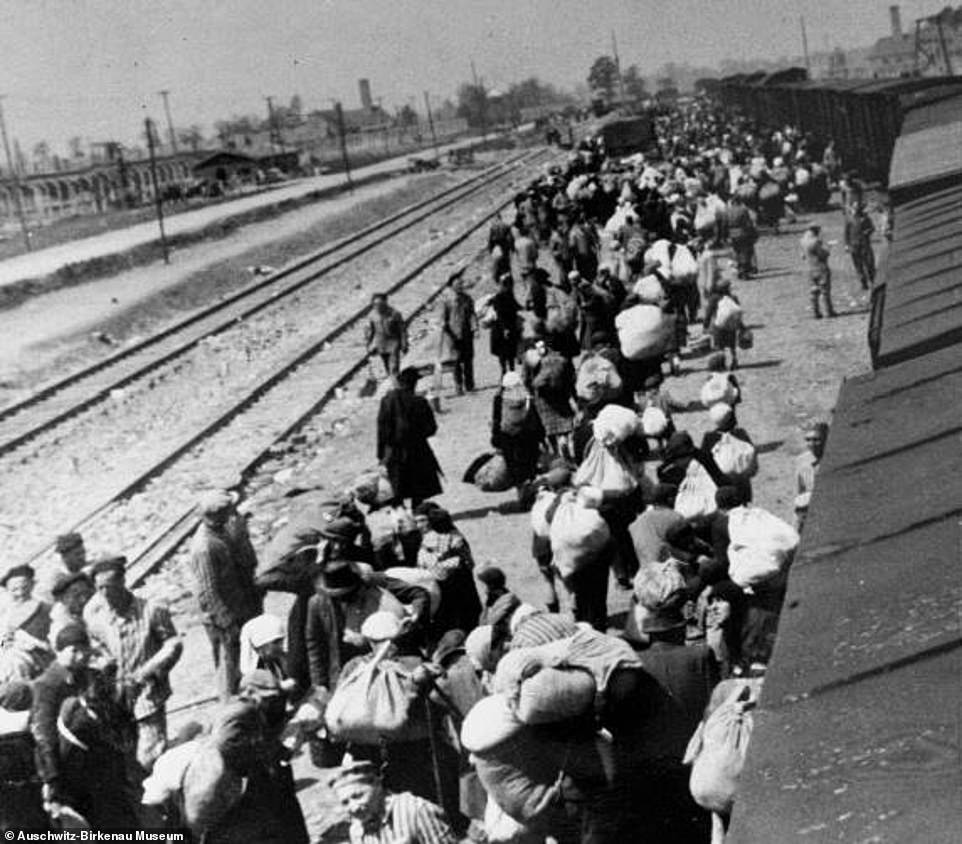 A transport of Jews hold their belongings shortly after arriving at Auschwitz-Birkenau. Many of these Jews were deported from Berehovo, near Hungary’s border with what is now Ukraine. This photograph was taken from the album belonging to SS officer Bernhardt Walter, who was head of the Auschwitz photographic laboratory known as Erkennungsdienst (identification Service). The album was made to be presented to camp commandant Rudolf Hoss 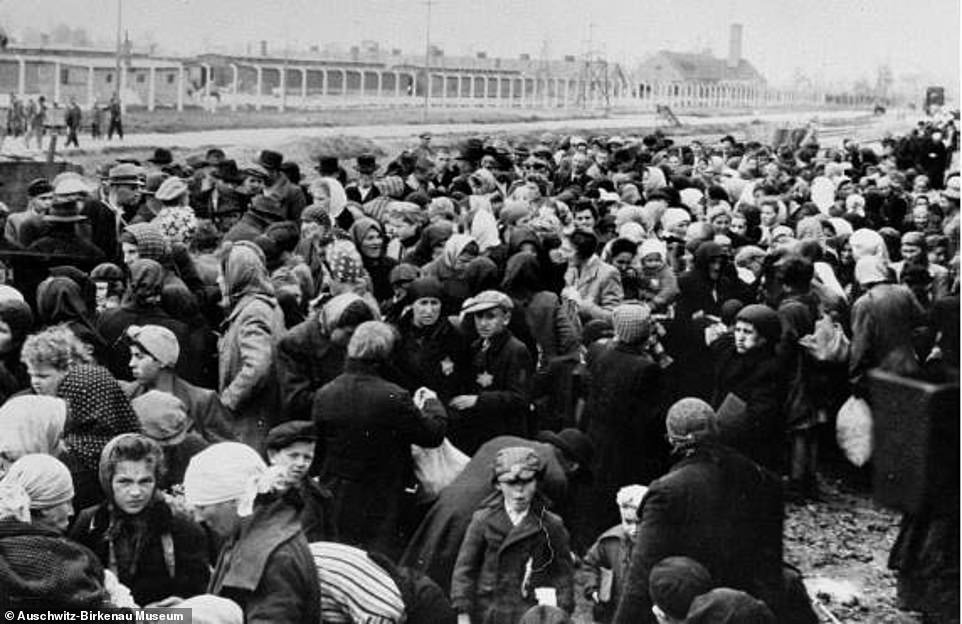 Those selected to die at Auschwitz-Birkenau included almost all children, women with small children, the elderly and others who were deemed not to be fit for work after a brief inspection by an SS doctor. Pictured above: Hungarian Jews crowd together while awaiting selection shortly after arrival at the camp 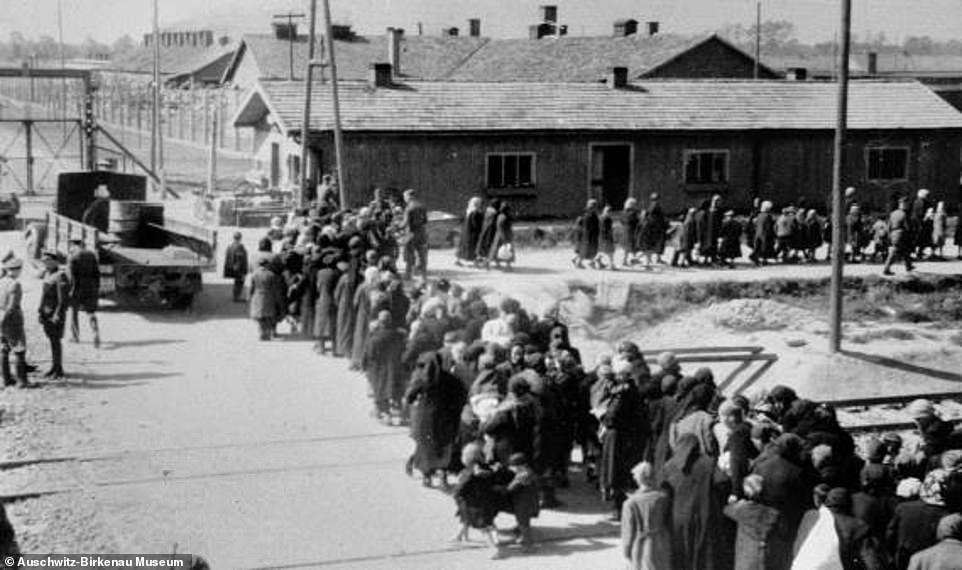 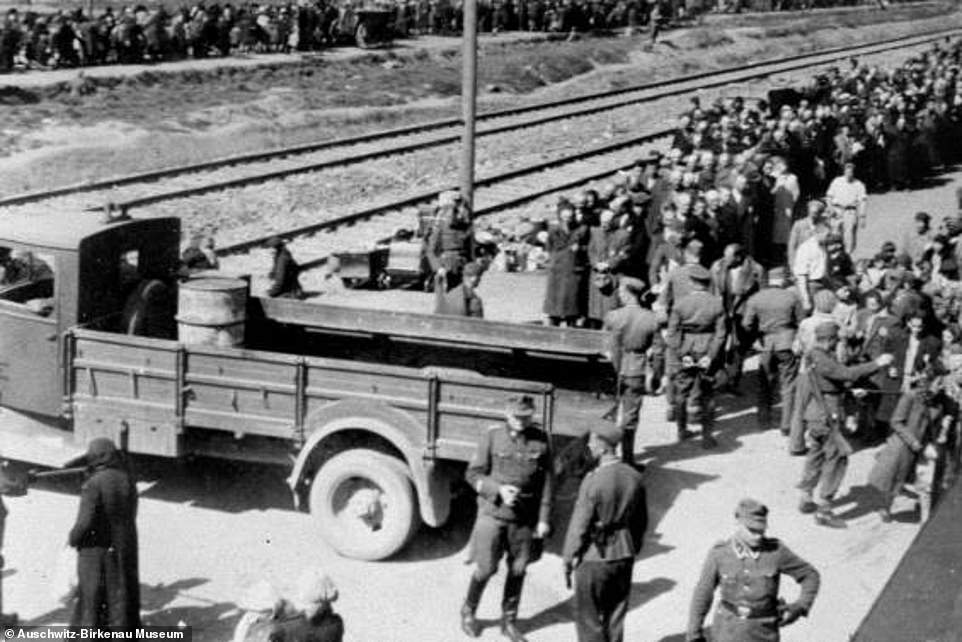 SS members stand guard as Hungarian Jews queue following their arrival at Auschwitz Birkenau. Mr Baxter said members of the SS had specifically chosen to work in concentration camps, rather than being posted to fight in the War. ‘They thought they could be really harsh and nasty and cruel, knowing they could get away with it,’ he said 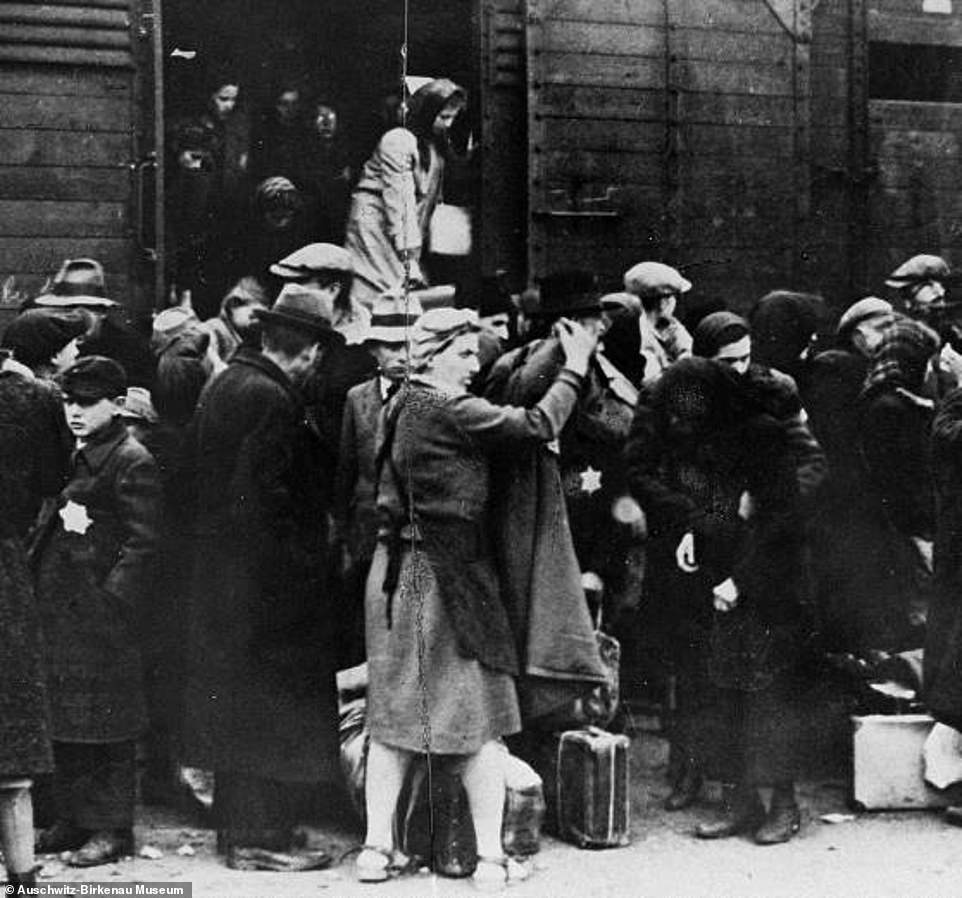 Hungarian Jews are seen getting off a freight train after a gruelling journey to Auschwitz-Birkenau in which they were packed tightly together. The women, children and old people in the above group will most likely have been condemned to death shortly after their arrival 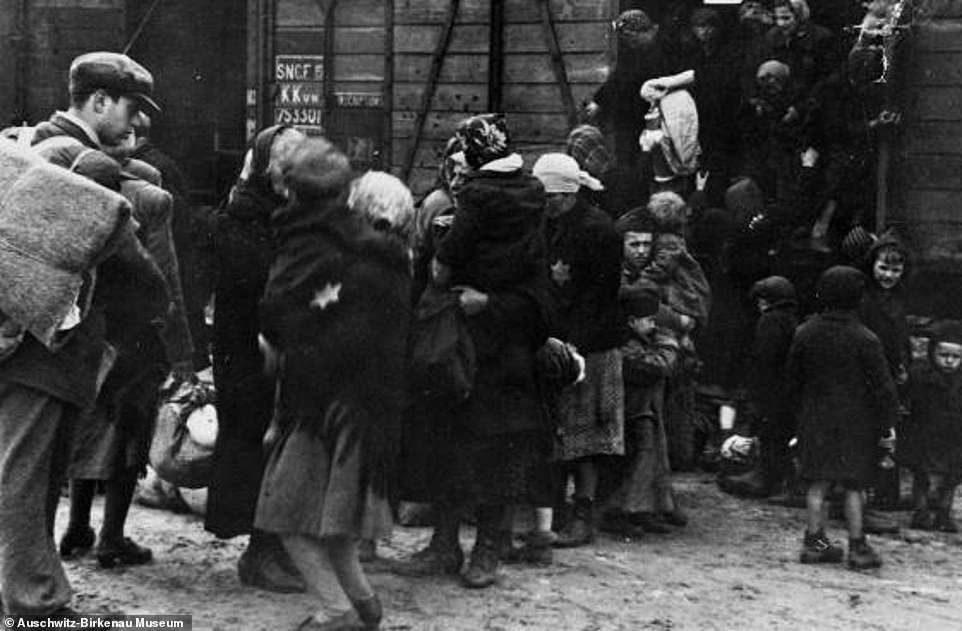 Women and children are seen above jumping from the freight trains shortly after their arrival at Auschwitz. Among them is a boy seen holding a younger child in his arms. In the foreground, a young man wearing a hat looks at a woman who is also holding a child 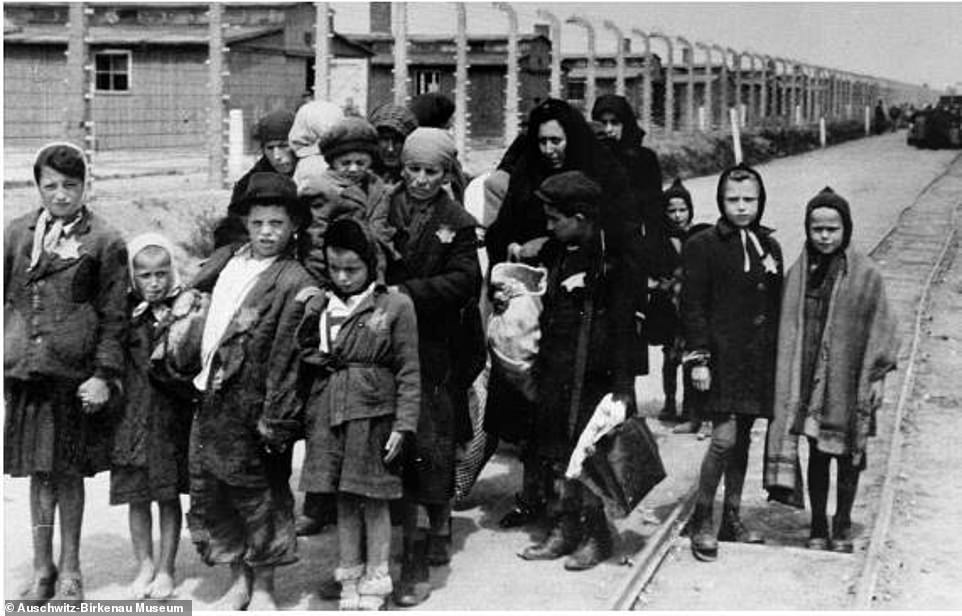 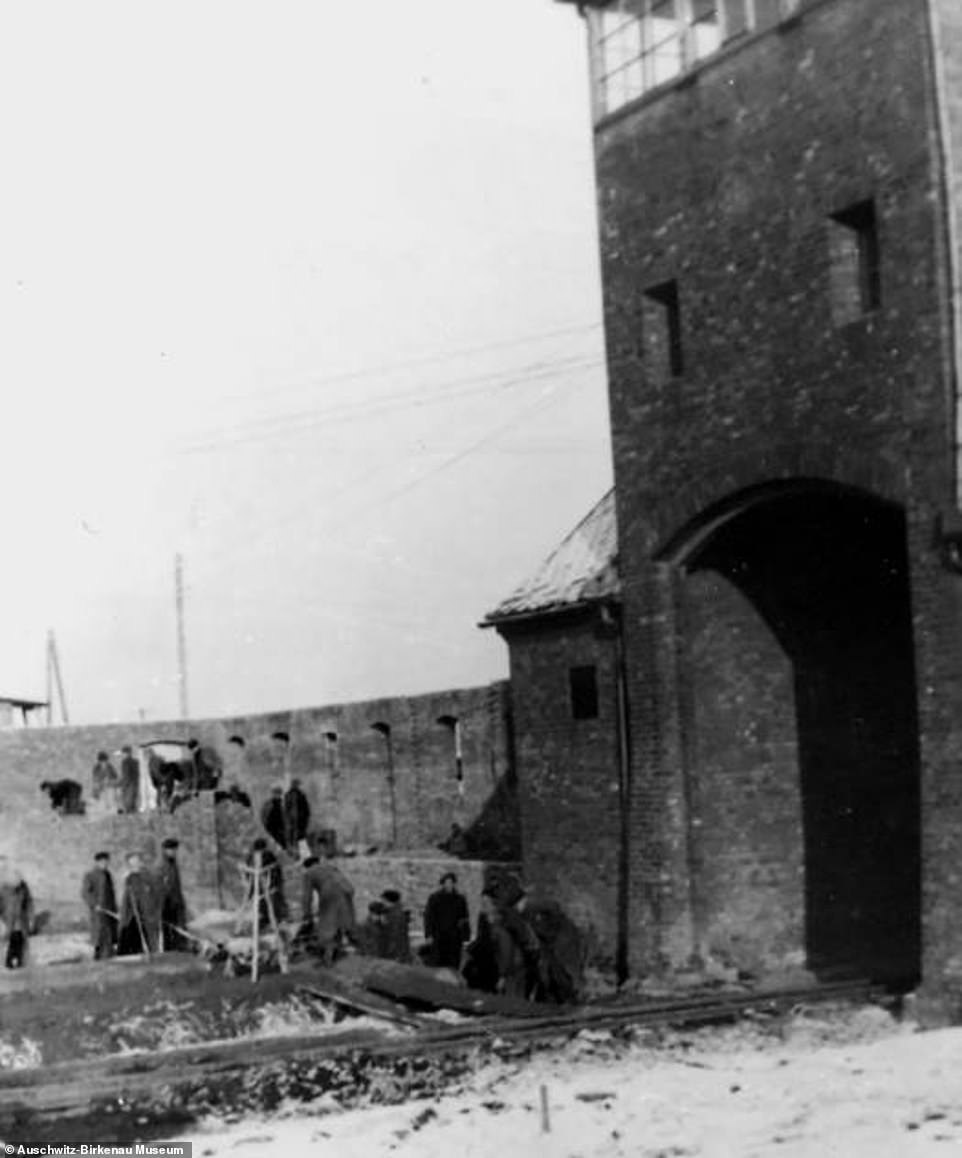 Construction works are seen taking place near the main entrance to Birkenau, which was built next to Auschwitz. The image is believed to have been taken in the spring or summer of 1943. In May 1944, commandant Hoss supervised the laying of a railway line through the main entrance. It was built specifically to transport Hungarian Jews to the camp 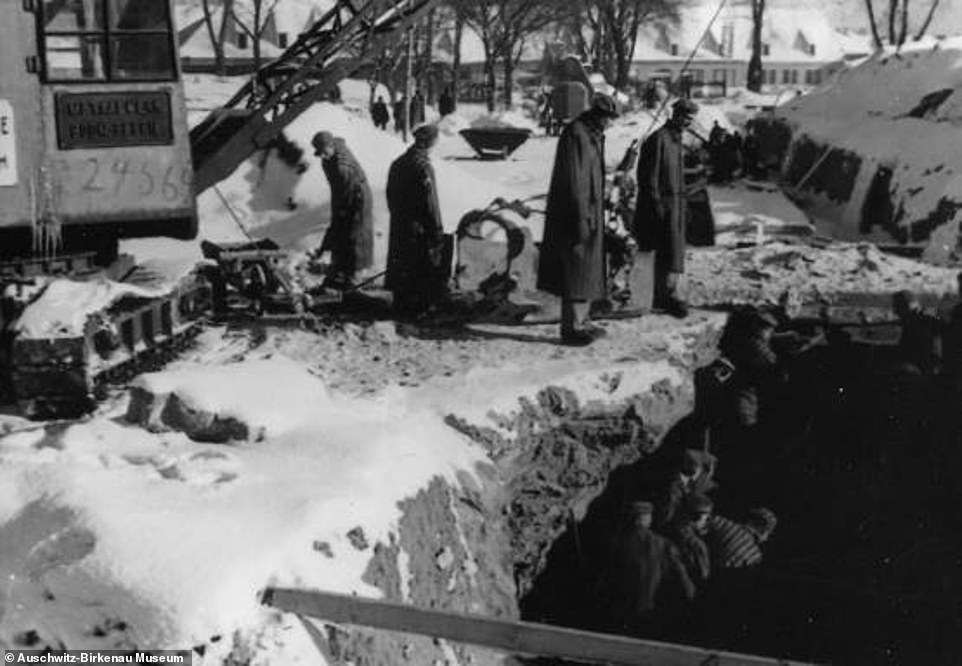 This photograph shows prisoners digging drainage ditches at Birkenau. Those who were selected to work had to endure horrific conditions in the freezing cold and were given very little food

WHAT WAS THE AUSCHWITZ CONCENTRATION CAMP?

Auschwitz was a concentration and extermination camp used by the Nazis during World War Two.

The camp, which was located in Nazi-occupied Poland, was made up of three main sites.

Auschwitz was an extermination camp used by the Nazis in Poland to murder more than 1.1 million Jews

Birkenau became a major part of the Nazis’ ‘Final Solution’, where they sought to rid Europe of Jews.

An estimated 1.3 million people were sent to Auschwitz-Birkenau, of whom at least 1.1 million died – around 90 percent of which were Jews.

Since 1947, it has operated as Auschwitz-Birkenau State Museum, which in 1979 was named a World Heritage Site by Unesco.

Since 1947, it has operated as Auschwitz-Birkenau State Museum, which in 1979 was named a World Heritage Site by Unesco