Met police serve up one London’s first Covid curfew fines of £1,000 to fast food restaurant who handed a burger to a hungry customer FOUR MINUTES after deadline

The Met Police have served up one of London’s first Covid curfew fines to a fast food restaurant which handed a burger to a customer at 10.04pm.

Three businesses were fined £1000 in East London as a ‘multi-agency team’ scanned the Ilford area for coronavirus rule breached on Thursday.

Bim’s Burgers on Ilford Lane was slapped with a fine when a customer was served their food four minutes after the deadline, according to Rebridge MPS.

Bim’s Burgers (pictured) on Ilford Lane was slapped with a fine when a customer was served their food four minutes after the deadline, according to Rebridge MPS

Police said that rules were breached by the business having one customer in its store waiting for his takeaway meal.

When the customer’s receipt was inspected it showed the customer was served at 10pm ‘on the dot’ and ‘staff were not handing the customer his food until 10.04pm.’

The owner’s of Bim’s burgers said that the incident ‘was made in good faith’ and with new rules regarding Covid-19 being ‘made thick and fast’ it sometimes it isn’t ‘clear exactly how they should be interpreted.’

In a statement from Bim’s Burgers, a spokesperson said: ‘We very much regret that our staff unknowingly breached the Government’s 10pm curfew. A customer entered the restaurant a few minutes before 10pm, just as we were shutting up for the night. He was the only customer on the premises at that time.

‘We began processing his food order before the curfew and his final receipt was printed at 10pm. Our staff were under the impression that if an order was placed by 10pm it could still be served. The food took less than four minutes to arrive and he left at 10.04 pm.

‘Our staff were then shocked to be informed that they had breached the new laws by a matter of four minutes. New rules regarding Covid-19 are being made thick and fast and sometimes it isn’t clear exactly how they should be interpreted.’

The takeaway company defended its actions by stating that staff had not let anyone in after 10pm and the customer was on the premises prior to that time.

The business argues that it would have been insulting to the customer if he had been asked to leave.

The spokesperson added: ‘This was a very minor mistake, but it was made in good faith. Under the circumstances we think it would have been reasonable for us to receive a verbal warning as opposed to a £1000 fine.

‘Had we served a customer at 10.15pm or even later then without doubt this fine would have been fully justified. However, we will not be complaining about the police operation and our staff will obviously take greater care in future to abide by the law.’

The supervisor on was issued with the fine on behalf of the owner. 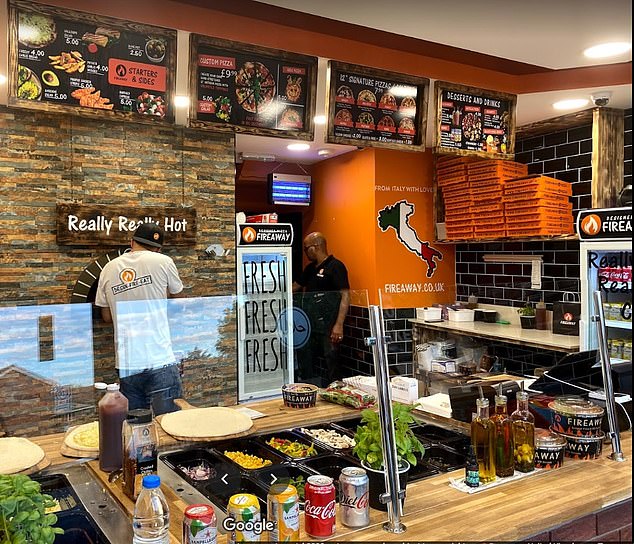 According to police two people were inside the premises at 10.20pm having just placed an order with the company.

The two customers were then both sat waiting for their food on stools inside the store and not wearing face masks.

The multi-task agency issued the manager with a fine. The third takeaway that broke curfew rules was Spice on High Street, Ilford.

Police said the store ‘breached Covid-19’ and was issued a ‘£1,000 fine for subsequent breaches.’

Government rules introduced on September 24 set out that businesses selling food or drink must be closed between 10pm and 5am, including takeaways, however delivery services can continue after 10pm.

Spice and Fireaway Pizza were contacted for comment on the fines issued but did not respond.