Schoolgirl, 14, is stabbed in the neck by woman on east London street as police arrest female suspect

A female suspect has been arrested after a teenage girl was stabbed in the neck on a street in east London yesterday afternoon.

The 14-year-old was knifed in Ilford at around 3pm on Monday with a woman, whose age has not been released, arrested over the attack on suspicion of GBH with intent.

Ambulances rushed to the scene and the victim was treated by paramedics before being taken to hospital.

She is not thought to be in a life-threatening condition.

A female suspect has been arrested after a girl, 14, was stabbed in the neck on the junction between Eynsford Road and New Road in Ilford, London, at 3pm this afternoon 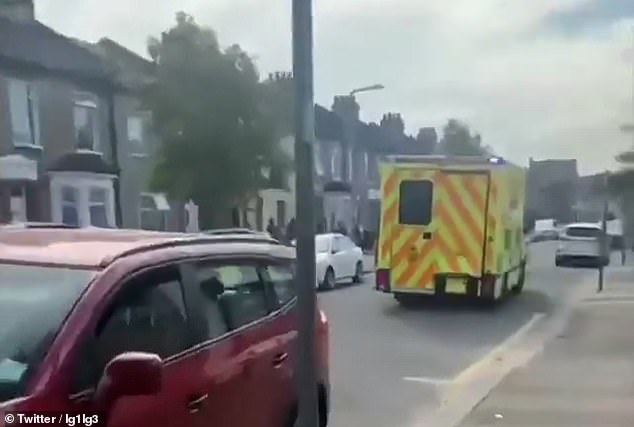 London Metropolitan Police said: ‘Police were called at 3pm on Monday, September 6, to Eynsford Road, junction with Green Lane, Ilford, to reports of a stabbing.

‘Officers attended with LAS and found a 14-year-old suffering from a laceration to her neck.

‘Her condition at this time is not thought to be life-threatening.

‘Officers arrested another female on suspicion of GBH with intent and have taken her into custody.

‘A crime scene is in place and enquiries are ongoing.’

A London Ambulance Service spokesperson said: ‘We were called at 3.01pm today to reports of a stabbing on Eynsford Road, Ilford.

‘We sent a number of resources to the scene including an ambulance crew, a medic in a car, an incident response officer and London’s Air Ambulance.

‘We treated a teenage girl at the scene and took her to a major trauma centre.’