The firm said it was sorry for sharing a string of photos on social media using the clifftop in east Sussex to promote a ‘staycation accessory’.

The photoshopped images, showing a man called Sven wearing the ‘must-have’ quilt come despite a campaign encouraging people to stay away from crumbling cliffs.

Ikea said it had not meant to cause offence and Instagram posts, which urged people to ‘staycation like Sven,’ have been removed.

In the past year there has been almost 50 cliff falls in east Sussex, as well as 13 incidents of people being stranded on the beach after being cut off by the tide. 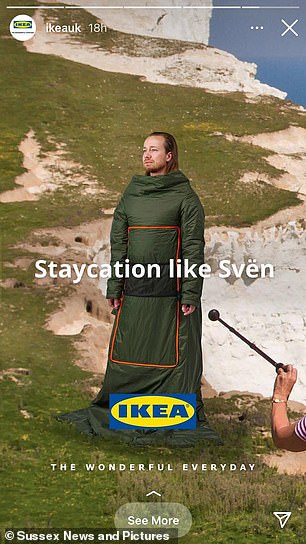 The photoshopped images, showing a man called Sven wearing the ‘must-have’ quilt come despite a campaign encouraging people to stay away from crumbling cliffs

On Instagram the images were accompanied by a caption which read: ‘Our must-have Faltmal is flying off the shelves, but this is your chance to win one.’

According to the Ikea website, the Faltmal is a cushion which folds out into a quilt ‘that keeps your warm and comfy when travelling’.

The £25 piece has ‘genius button fastening’, that keeps it from sliding off when ‘you reach for your coffee’.

In the images, a pair of walkers can be seen looking towards Sven, as if admiring his bizarre fashion choices.

The blunder comes amid a campaign to remind walkers of the dangers on the chalk cliffs, with many unseen overhangs and cracks.

Last month, a huge cliff fall at Seaford Head left an enormous mound of rock piled up at the foot of the cliffs.

Karl Taylor, head of operations at East Sussex County Council, recently said: ‘We want people to come to East Sussex and enjoy its beautiful coastline, but to do so safely and be aware of the dangers that the chalk cliffs and the sea can present.

‘Visitors should not underestimate the risks they are taking when they stand on top of the cliffs or at the cliff base, and should remember that it is very easy to be caught out by the incoming tide when walking on the beach.

‘Our message to anyone visiting the area is enjoy the amazing views safely by keeping well away from the edge and base of the cliffs, and to be aware of the tide.’

Anyone who sees see someone in danger on a cliff is urged to call 999 immediately and ask for the coastguard.

In June 2017, a Korean student plunged 200ft to her death as she was having her picture taken at the top of the cliffs just east of Cuckmere Haven, not far from Birling Gap.

The 23-year-old had asked fellow visitors to the site to take her picture near the precipice and jumped upwards as she posed, hoping the camera would catch her in mid-air.

When she came back down to earth, only one of her feet landed on solid ground with the other going beyond the cliff’s edge.

She lost her balance and stumbled backwards, falling over the edge. 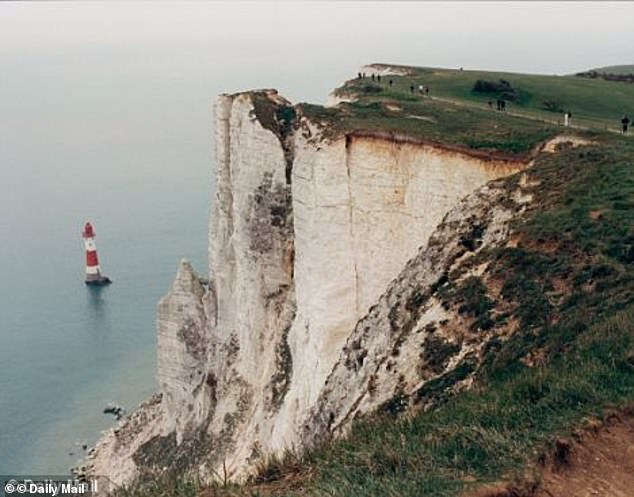 In the past year there has been almost 50 cliff falls in east Sussex, as well as 13 incidents of people being stranded on the beach after being cut off by the tide

At her inquest, held four months later, coroner Alan Craze recorded her cause of death as misadventure.

A spokesman for the Maritime and Coastguard Agency said: ‘Cliff edges are very dangerous places to be, as they are subject to erosion and can give way without warning.

‘We strongly advise everyone to keep well back from the edge.’

More than 350,000 people visit the cliffs at Birling Gap and Seven Sisters each year.