With IFA 2022 set to kick off in Berlin this week, MailOnline has taken a look at some of the weird and wonderful gadgets that we expect to see.

Held annually, IFA, or Internationale Funkausstellung, is one of world’s leading trade shows for consumer electronics and home appliances, held annually in Berlin.

This year’s IFA runs from September 2-6 and is the first full-scale in-person event for three years, due to disruption by the Covid pandemic in 2020 and 2021.

More than 1,000 exhibitors from over 30 countries will present their products to retailers, buyers and industry experts, including Samsung, LG, Huawei and Nokia.

MailOnline will also be attending the show, bringing you all the latest news as it happens from Berlin.

WHAT IS IFA BERLIN?

IFA, or Internationale Funkausstellung, is one of world’s leading trade shows for consumer electronics and home appliances.

The first IFA event in December 1924 focused on innovations in the radio sector, but it since has encompassed a wide range of technology demos.

In 2020, IFA took place a three-day event with a limited number of participants due to the Covid pandemic.

It was due to take place at full capacity in 2021 before being cancelled, due to ‘uncertainty’ regarding Covid vaccine rollouts.

A notable absentee is Apple, which doesn’t attend IFA and instead likes to reveal its products on its own terms. The US tech firm is set to reveal its new iPhone in September.

Japanese giant Sony has also made the decision not to exhibit at IFA 2022.

It said in a statement: ‘As the world has greatly shifted towards digital and online opportunities, Sony will communicate in ways that can deliver our exciting product news to a wider audience.’

Nevertheless, here’s some of the rumoured and confirmed products from those who will be exhibiting in Berlin this week.

Samsung is expected to showcase a new prototype for a smart toilet, developed in partnership with the Bill & Melinda Gates Foundation.

Designed for household use, the toilet features heat-treatment and bioprocessing technologies that kill the pathogens in human waste, which then makes the waste safe for release into the environment.

The solid waste is dehydrated, dried and combusted into ashes, while liquid waste is treated through a biological purification process.

Samsung hasn’t confirmed that it will be displaying the smart toilet at IFA Berlin, although it would fit in with the firm’s eco-friendly focus for the event. 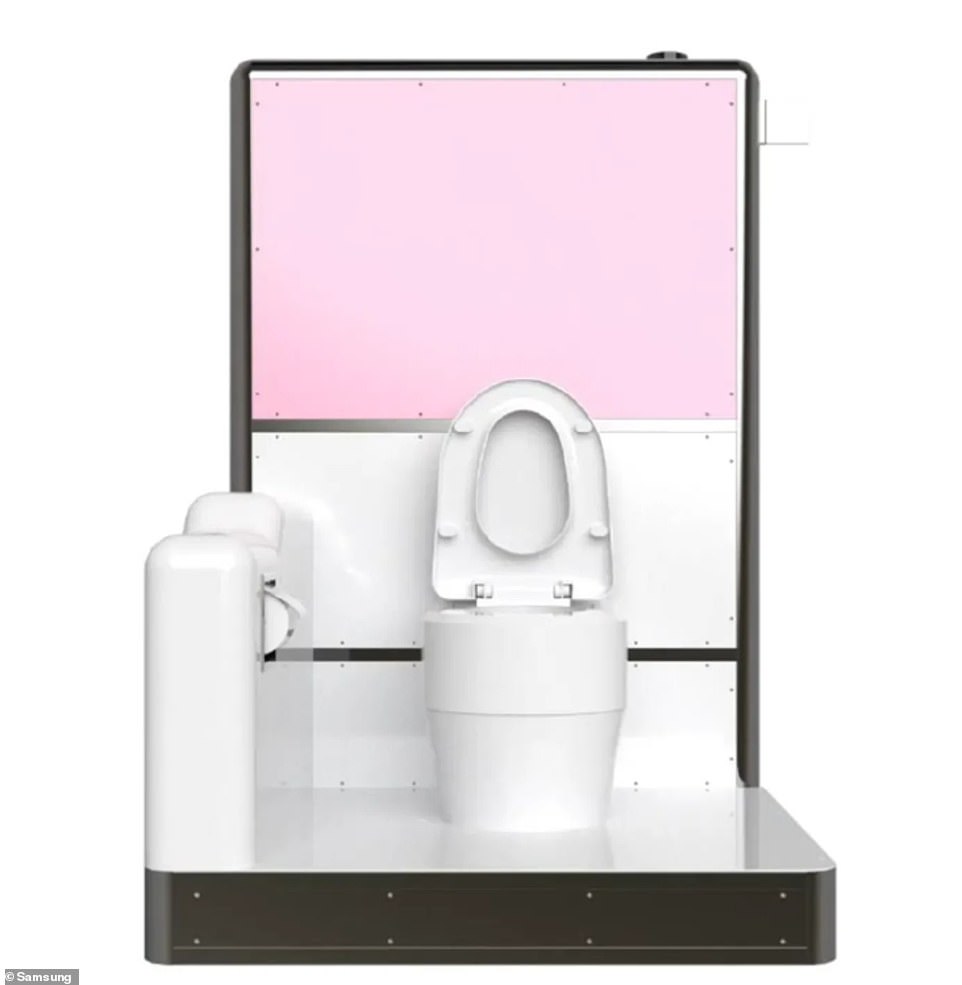 It is the only TV technology to create colour like this. LCDs, for instance, use colour filters and liquid crystals that block light to create an image.

This means that OLEDs can be thinner and more flexible than any other television technology currently on the market.

Jae Seung Lee, head of digital appliances at Samsung Electronics, said in a blog post that it will showcase smarter and more efficient appliances that will ‘bring to reality our vision for a sustainable future’.

LG has already revealed the LG OLED evo Gallery Edition TV (Model 97G2), the world’s largest OLED TV, and will show it off at IFA 2022.

It has a whopping 97-inch screen, which LG said will ‘deliver immersive viewing experiences on a grand scale’.

OLED TVs use self-lit pixels that can be turned on and off individually to reproduce ‘perfect blacks and incredibly natural colours’.

Leo Gebbie, analyst for connected devices at CCS Insight, said he expects a focus on TVs and audio systems at IFA 2022, ahead of the men’s FIFA World Cup in Qatar this year.

It’s not known when LG’s massive new model will become available, although it will likely be before the World Cup kicks off on November 20.

‘World Cup fever has always proven a handy boost for TV sales and the timing of a winter tournament so near to the holiday season should help to boost interest here,’ Gebbie said.

‘We aren’t expecting much in the way of major VR or AR announcements, but it would be no surprise to see some headsets on the show floor, especially if they choose to leverage football frenzy by showcasing immersive sports experiences.’ 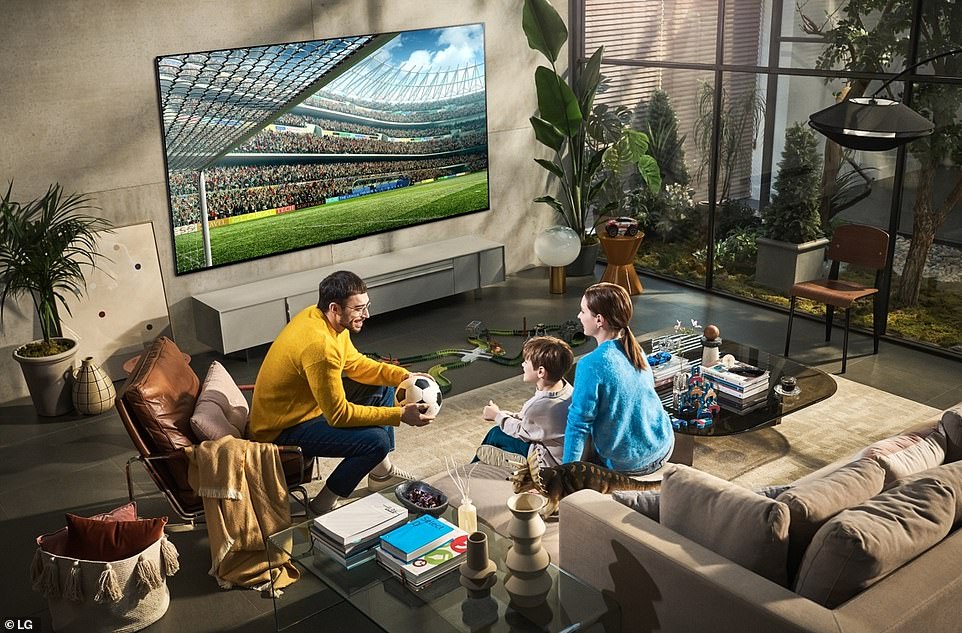 LG has teased that the new TV is part of an ‘expanded lineup of premium TVs’ that include ‘a growing number of ultra-large screen sizes designed for memorable home viewing experiences’.

QLED, or quantum dot display, is a new type of technology used in screens. It’s made of quantum dots, or tiny particles, that emit sharp colours based on their size.

LG is also set to show off a curved gaming monitor for ‘immersive gaming experiences’ and a new air purifier designed for table tops that offers 360-degree air purification.

Ahead of the event, LG has also already announced two new products for shoe obsessives with an expansive collection – ‘ShoeCase’ and ‘ShoeCare’.

ShoeCase is a ‘space-friendly’ storage solution that’s made up of several modules with transparent covers, each designed to house a pair of shoes.

It provides shoe enthusiasts with a way for to show-off their favourite pairs, offering interior features such as a 360-degree rotating turntable. 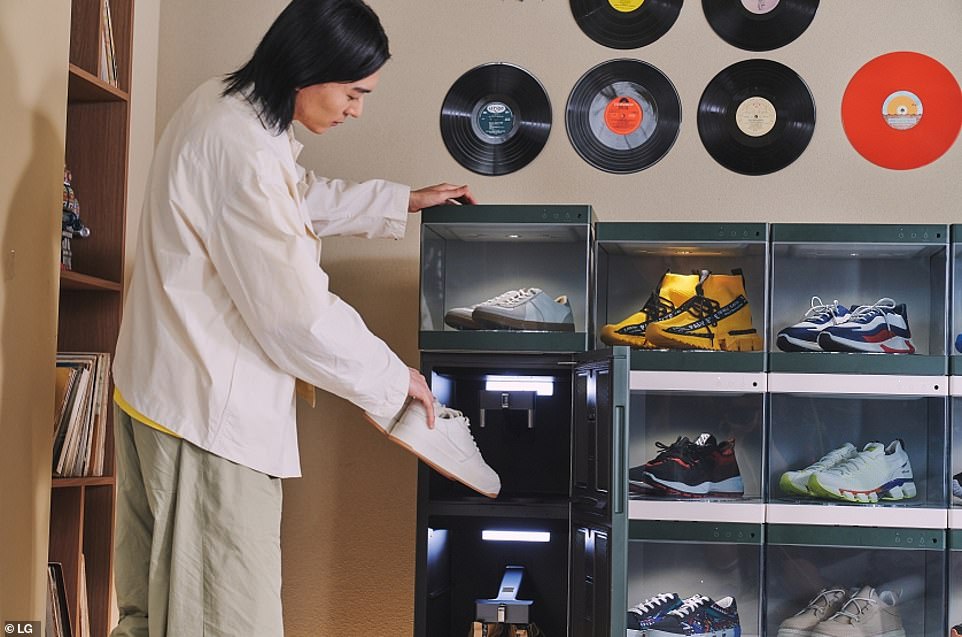 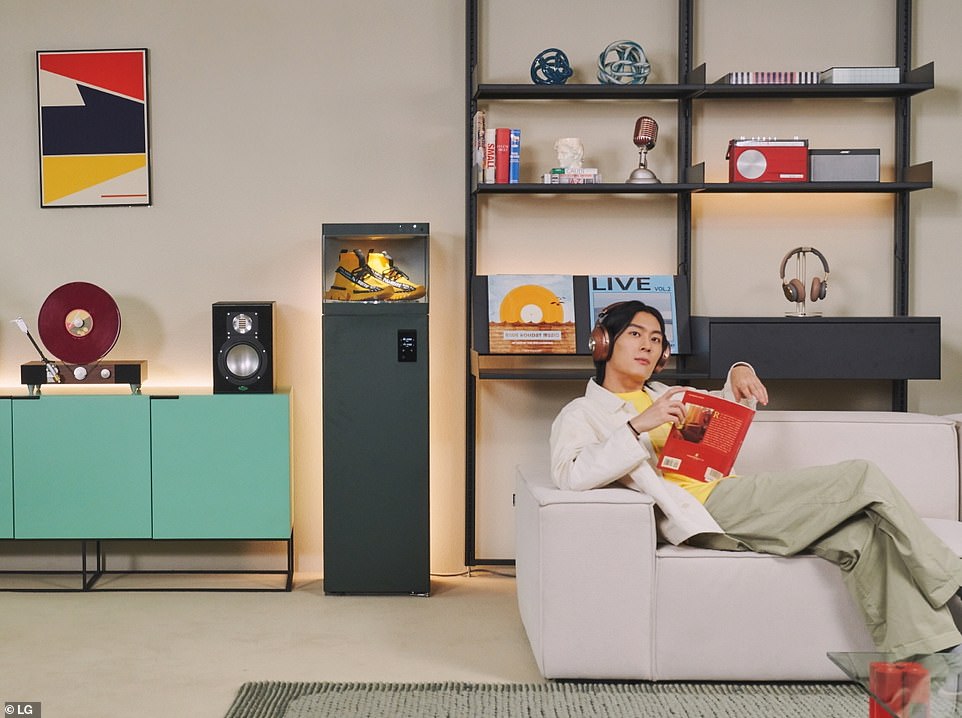 ShoeCare operates at 35 decibels, so home users  aren’t disturbed when they’re trying to listen to records or concentrate on their work

Meanwhile, ShoeCare uses steam to soak up moisture and help remove smells from footwear, whether they’re made of leather, suede or nylon.

Users will be able to put up to four pairs of shoes into ShoeCare and leave them to refresh in a 37-minute-long cycle.

ShoeCare operates at 35 decibels, somewhere between the level of a whisper and a quiet library, which makes sure users aren’t disturbed when they’re trying to listen to records or concentrate on work.

Taiwanese company Asus is expected to show off the Zenbook 17 Fold OLED, a laptop with a 17.3-inch touchscreen display that folds in half.

The firm says the OLED touchscreen folds down to a compact 12.5-inch size, making it smaller than a sheet of photocopier paper for easy carrying.

Zenbook 17 Fold OLED was first unveiled in January at CES 2022 in Las Vegas, but IFA 2022 coincides with the device’s launch date – August 31. 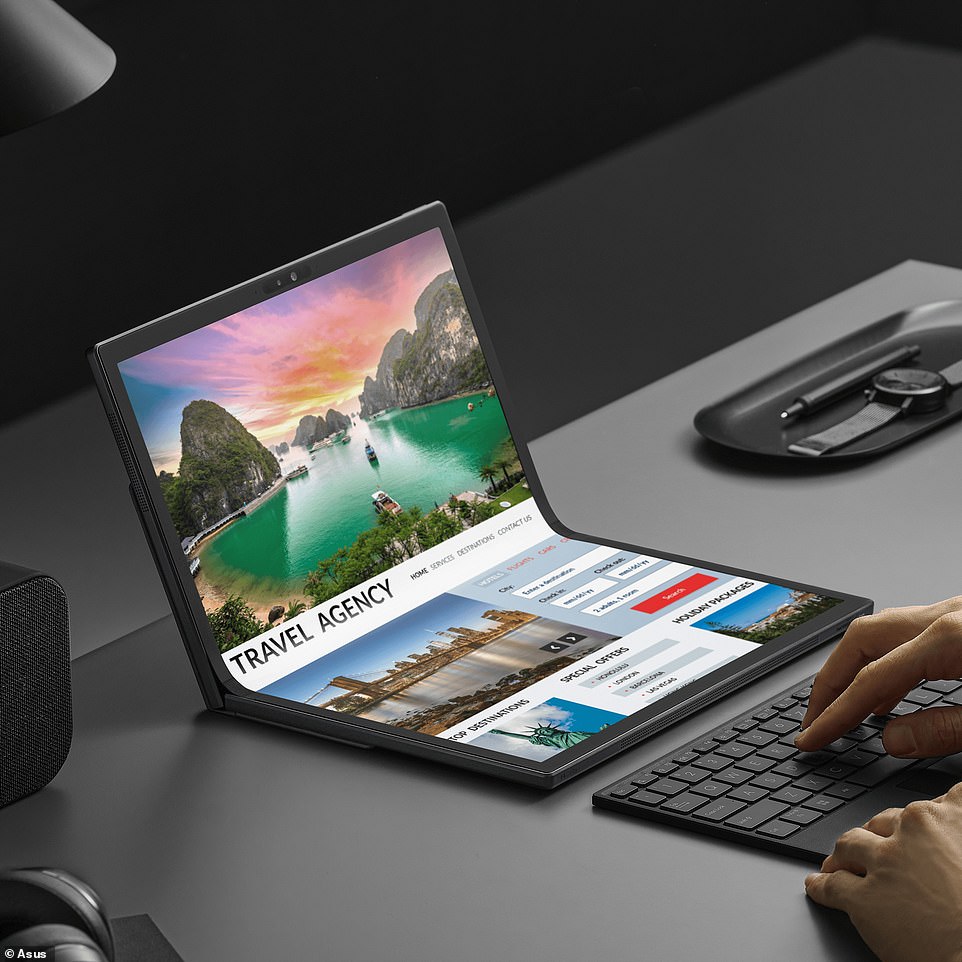 Taiwanese firm Asus is expected to show off the Zenbook 17 Fold OLED (pictured), described as the ‘world’s first foldable laptop’

The Asus website features a countdown timer to the launch on Wednesday, which should reveal availability, price and other details.

Samsung should use IFA as a chance to showcase its new foldable smartphones, the Galaxy Z Fold 4 and Galaxy Z Flip 4, although it will also lift the lid on other devices that so far remain a secret.

MailOnline contacted Samsung about what it would be revealing at IFA Berlin, but the Korean tech giant wouldn’t share any details.

It’s set to hold its own press conference, entitled ‘A Smarter Life, A Sustainable Future’, at 11am local time (10am BST) on Thursday where it will reveal more.

Gebbie at CCS Insight said he expects Samsung’s latest foldables, which were released on August 26, to be prominently displayed at IFA, but it could be joined by other new arrivals in the foldable display market.

‘Foldable displays and flexible display technology could be a theme that wraps around the whole show,’ Gebbie told MailOnline.

HMD Global, which makes Nokia phones, is also expected to reveal multiple new handsets and some extra products too, although they’re not thought to be foldable.

Other Chinese smartphone players such as Honor are expected to use IFA as a launch pad for major European expansion, according to Gebbie 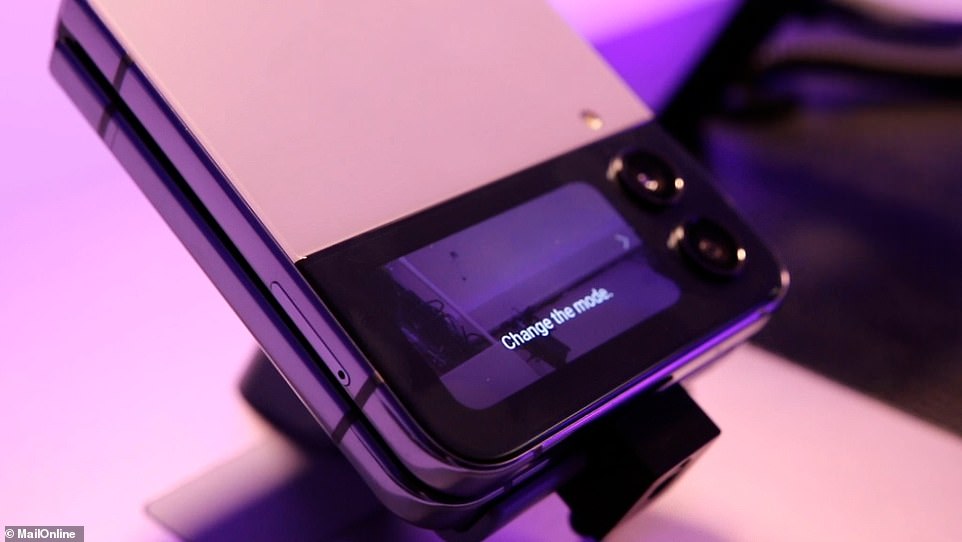 Samsung could use IFA as a chance to showcase its foldable smartphones, the Galaxy Z Fold 4 and Galaxy Z Flip 4 – although it will reveal new products too

‘Smartphones don’t usually dominate at IFA, but this year a slate of Chinese players look set to use the show as a springboard for their European ambitions,’ he said.

‘Notably, Honor is expected to use the show for a major European launch, while Huawei has a keynote slot and is likely to discuss a wide range of devices and services.’

According to GSM Arena, Chinese firm Honor will also showcase some earbuds which it’s been testing with a dummy head and torso.

A teaser promo image from Honor shows icons of phones, laptops, wireless earbuds and emojis with the tagline, ’embracing the connected future’, suggesting we could see a family of new products.

LG will be at IFA Berlin too, although it announced last year that it would no longer be making phones, so its focus will be on TVs and home appliances. 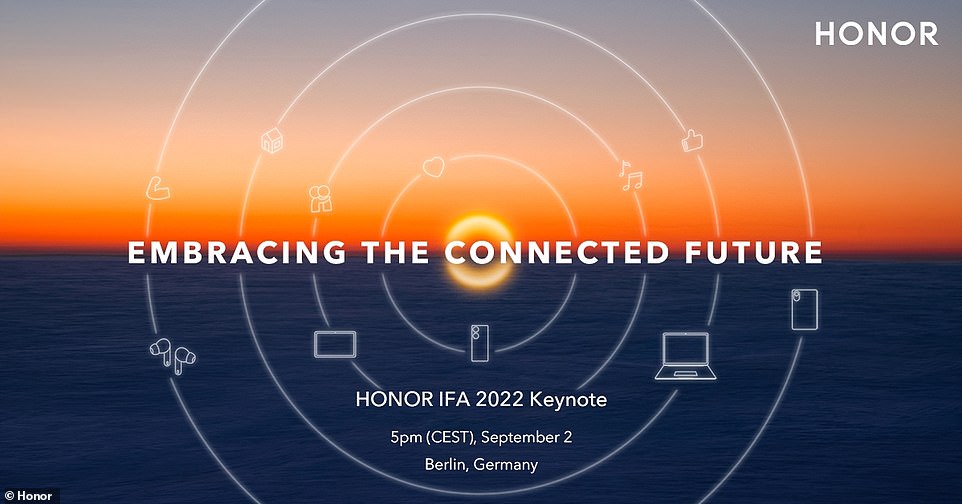 A teaser promo image from Honor shows icons of phones, laptops, wireless earbuds and emojis with the tagline, ’embracing the connected future’

Also at IFA will be smart home device makers Ring, which was bought by Amazon in 2018, as well as Arlo, Philips Hue, Tado and Yale.

According to Gebbie, the event will take place against amid the threat of recession and ‘darkening economic clouds’.

‘As companies unveil new products ahead of the critical holiday quarter, the looming threat of recession will only intensify the competition for available consumer spending,’ he said.

‘Darkening economic clouds are denting customer confidence and we expect that this will be a prominent topic of conversation at IFA.’