Twitter sleuths think they’ve found someone who looks like Bryan Kohberger, accused of slaying four Idaho college students, at a vigil for the victims after an ex-FBI investigator suggested he had joined online groups to discuss the killings.

A video posted earlier this week shows someone who they believe resembles Kohbeger, who was extradited back to Idaho Wednesday, walking into the hall filled with mourners.

The clip was taken from a vigil held for the four students killed at the University of Idaho’s William H. Kibbie-ASUI Activity Center, a venue that hosts the school’s football and basketball teams.

A Twitter user wrote: ‘Blue coat guy many think is Bryan Kohberger walking into the vigil.’

Watch the video below:

Twitter sleuths think they’ve found someone who looks like Bryan Kohberger (in the blue jacket at the bottom center), accused of slaying four Idaho college students, at a vigil for the victims 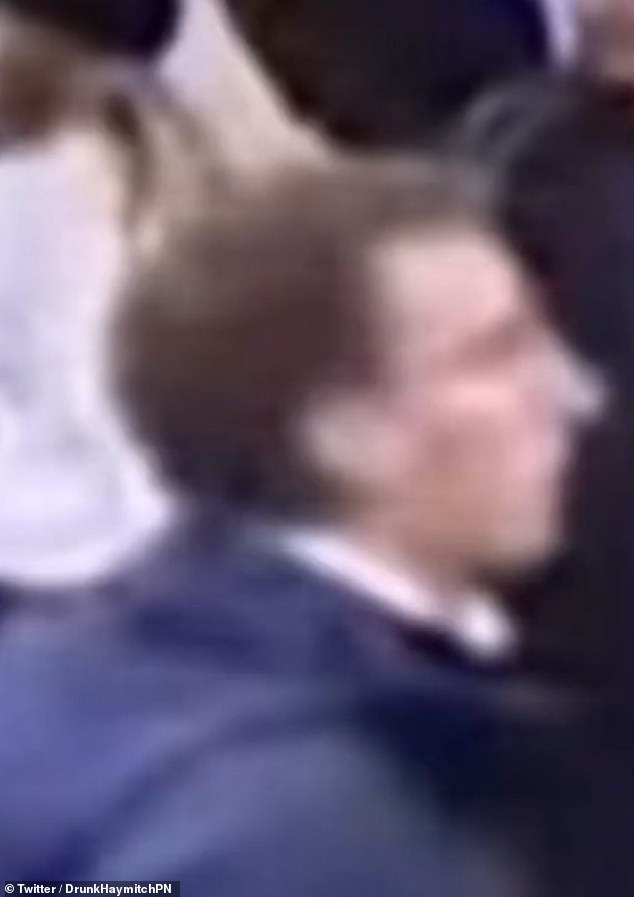 A video posted earlier this week shows someone who they believe resembles Kohberger, who was extradited back to Idaho Wednesday

The short clip, which has been viewed over 69,000 times, shows a man in a blue jacket innocuously walking into view at around midfield of the football stadium.

The same Twitter user posted a video comparing the man on the field with recent shots of Kohberger since the indictment.

Jennifer Coffindaffer said she had been following the comments of a Facebook user with the handle Pappa Rodgers, who along with a Redditor with the handle InsideLooking, made chilling speculations about the murders that turned out to be true.

In an archive about the two online personas who frequented discussions about the brutal slayings, both users accurately pointed out the timeline of the killings and the fact that police found a knife sheath, all before the details were publicly revealed.

Both users also appeared to repeatedly insist that their speculations were accurate, and were both accused of being the real killer in their respective groups.

Coffindaffer appeared to side with those who believed that at least one of the accounts belonged to Kohberger, 28 – who has maintained he’s innocent.

‘He drove his own car, carried his phone, and didn’t Clip in his sheath tight enough, so I do believe he could leave a digital trail,’ she wrote in a Tweet. ‘He was a hot mess. Intelligence w/no common sense equals a criminal bound to be caught.’

The scrutiny into the online discussion groups comes as Kohberger was denied bail while prosecutors revealed his DNA was found on the knife sheath lying next to one of the victims’ bodies. 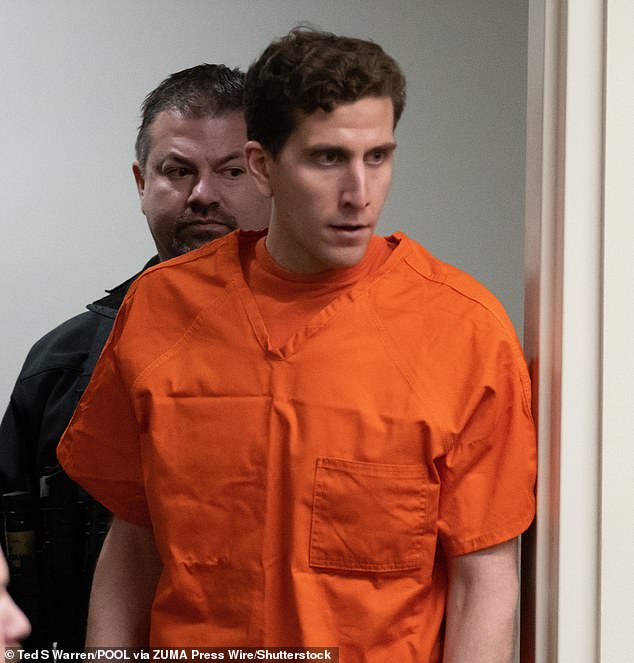 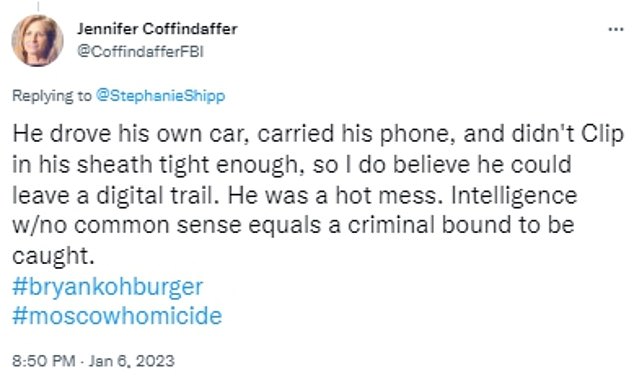 Coffindaffer believed that given the evidence against Kohberger, it was not far fetched to believe the criminology student left behind a digital trial 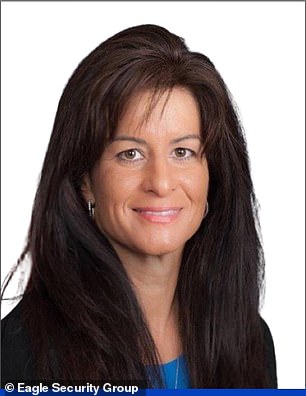 In the popular r/MoscowMurders Reddit group, the user InsideLooking made several speculations about the murder as police remained quiet about the full details of the murders.

One of the posts read: ‘Killer parked behind the house. Approached property through tree line. Entered sliding door and left it open.

InsideLooking also accurately pointed out that the pictures of a shoe print police were investigating belonged to the suspect.

The prints did not match those of the victims or anyone in the house, leading investigators to believe they were left by the murderer.

The user also insisted that the white Hyundai Elantra would be the key to cracking the case, predicting that it would lead police to the suspect.

Amid their speculations, InsideLooking appeared to draw attention to themselves, with many remarking about their detailed posts.

One sure commented: ‘Dude is solving his own crime… Psycho.’

Some have also pointed out that a profile picture for InsideLooking features a person dressed in all black, wearing gloves and a headlamp. 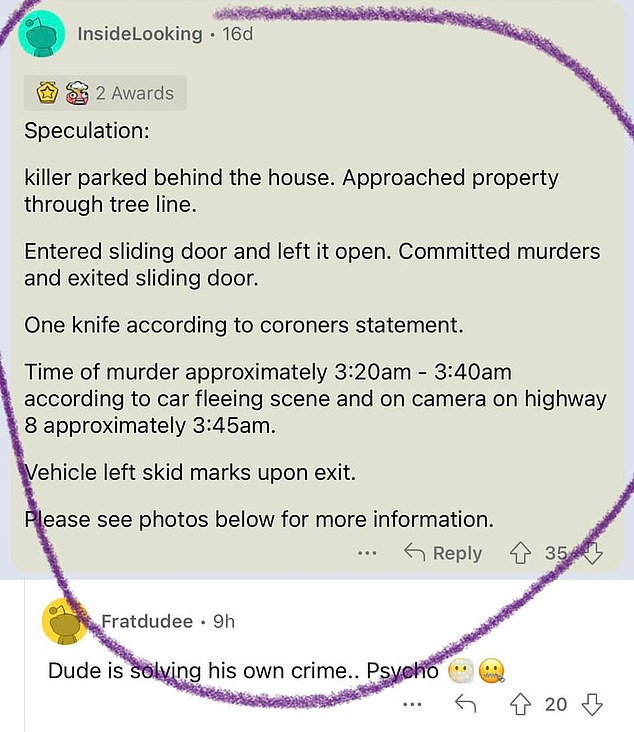 On Reddit, a user with the handle InsideLooking made chillingly accurate predictions about the case reportedly before the information was released publicly 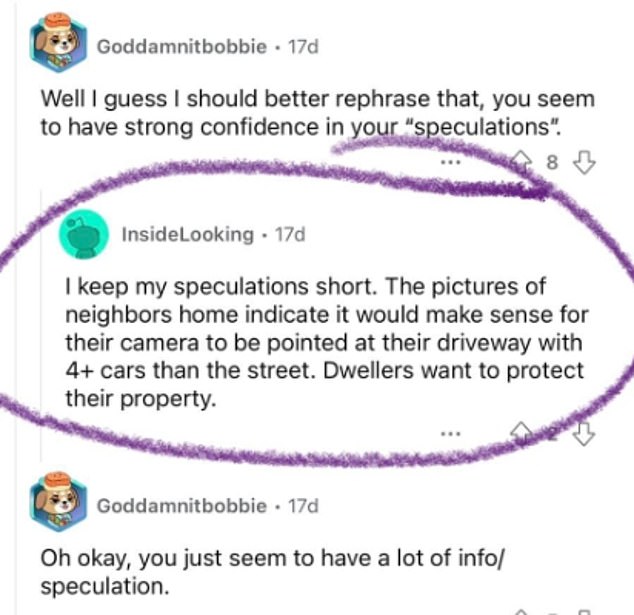 It led to many questioning why the speculations were so detailed 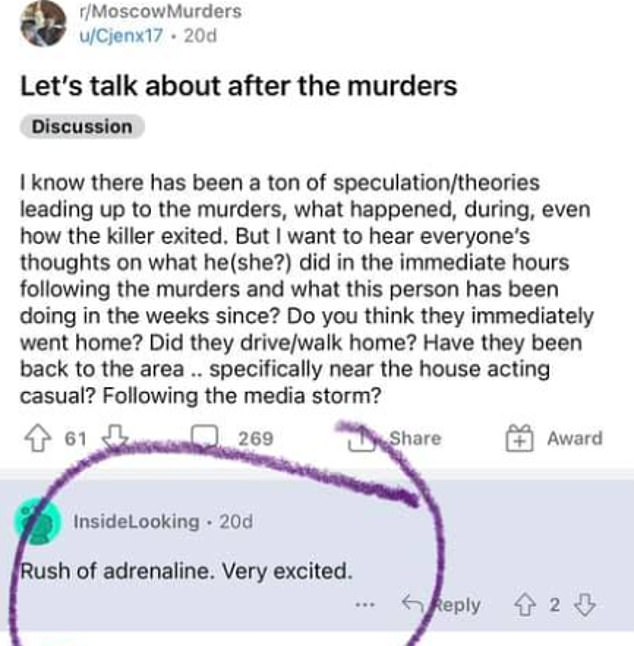 In one post, InsideLooking said the killer must have felt ‘very excited’ after the murders

The Redditor also pointed out the importance of the Hyundai Elantra 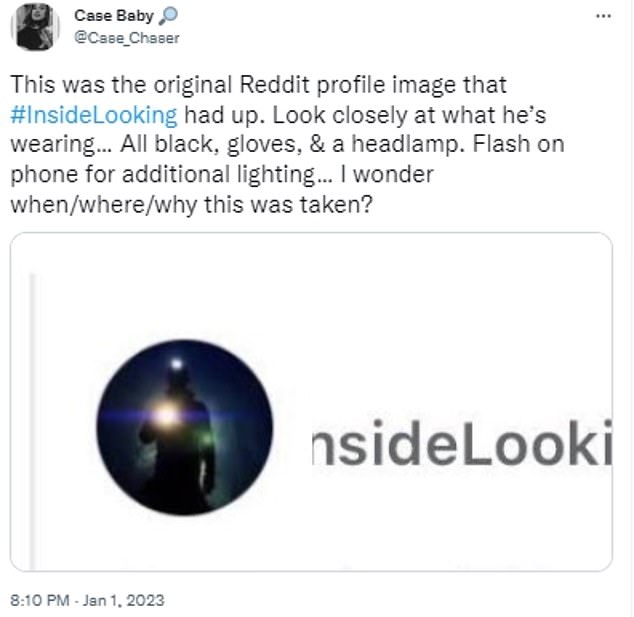 Some also pointed to the eerie profile InsideLooking used

A similar incident occurred with the Facebook user Pappa Rodgers, a member of the University of Idaho Murders-Case Discussion group.

In one post to the group flagged by Coffinadaffer, Rodgers wrote: ‘Of the evidence released, the murder weapon has been consistent as a large fixed blade knife. This leads me to believe they found the sheath.’

Rodgers appeared to insist that the sheath was real and even butted heads with other members about it, who accused him of communicating ‘like a serial killer.’

An admin of the group later clarified that despite Rodgers’ apparent authority in the group, he was never an admin or moderator.

Kristine Cameron, wrote: ‘He was on her and argued incessantly with people and said some really creepy stuff and posted similar questions to Bryan’s crime questions.

‘We removed Pappa Rodgers at 7:10 the evening before Bryan’s arrest. He created a group page and had 6 people in it.

‘No one has heard from Pappa Rodger since the arrest.’ 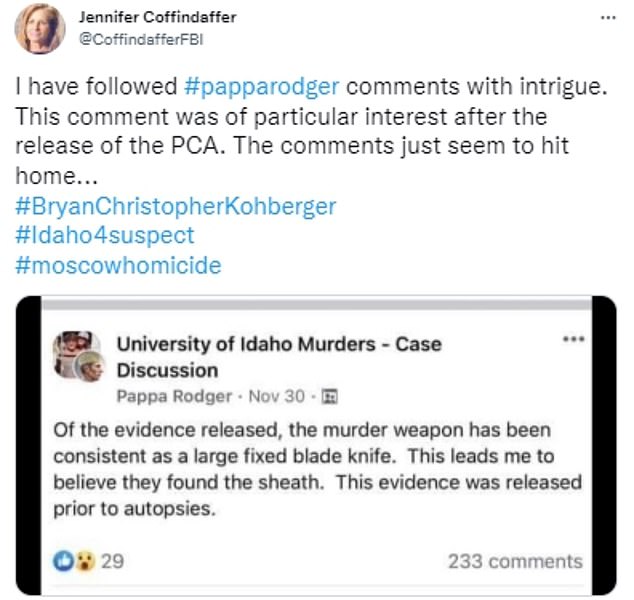 Over on Facebook, Papa Rodgers was a prominent figure in a discussion group who adamantly believed police had found a knife sheath 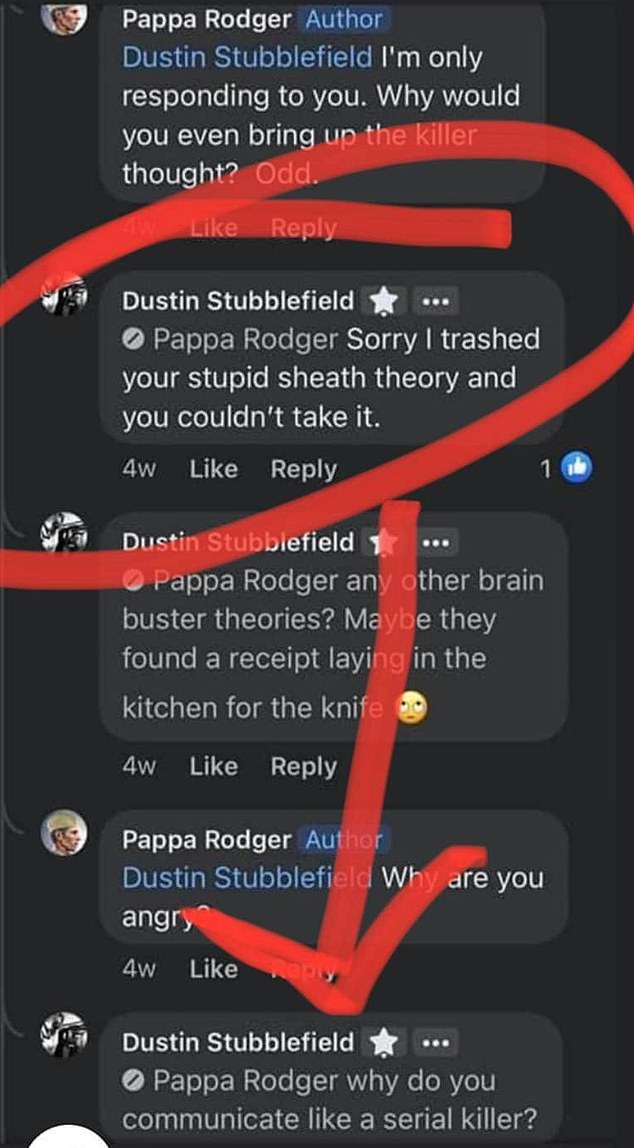 Rodgers argued with people about the sheath, with one saying he talked like a ‘serial killer’ 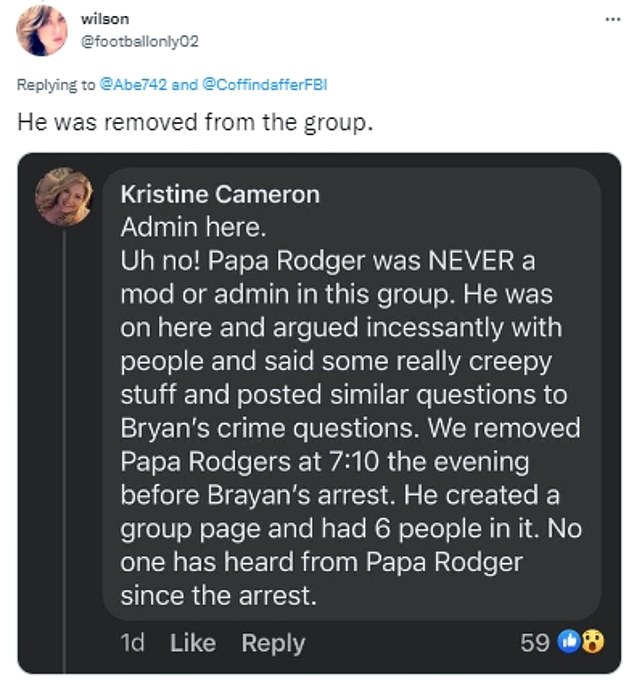 Kohberger, 28, was charged with the murder of Ethan Chapin, 20, Kaylee Goncalves, 21, Xana Kernodle, 20, and Madison Mogen, 21, and is being flown to Moscow, where the students were found dead in their off-campus home.

Kohberger was seen smiling during a brief court appearance on Thursday, that came as police and prosecutors revealed their bombshell case against him, including how his DNA was found on a knife sheath at the scene.

He was denied bail Thursday during a brief court appearance in Moscow shortly after an affidavit detailing prosecutors’ case against him was shared online.

Kohberger spent most of the 10-minute hearing looking directly at Judge Megan Marshall as she read him his rights and the five counts and answered ‘yes’ when asked if he understood each count.

At one point, Kohberger was pictured smiling at his lawyer Anne Taylor. It is unclear what prompted the grin, which comes six days after he shot to notoriety as America’s most infamous alleged mass murderer.

Kohberger remained impassive throughout but briefly began rocking back and forth as the judge told him he was facing the death penalty. He will return to court on January 12 for a status hearing. 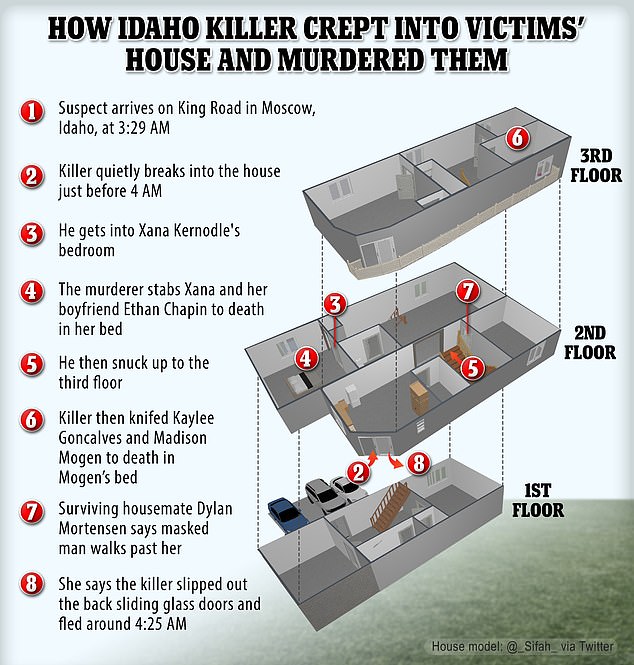 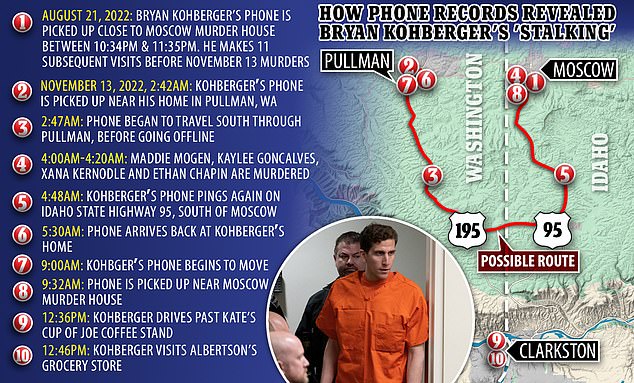 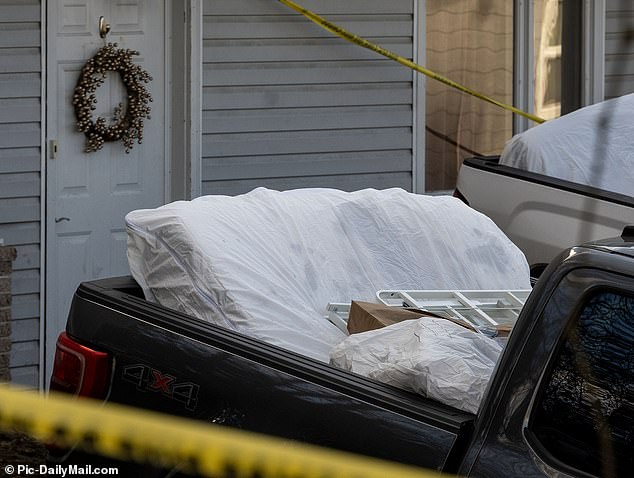 The court papers included details on how Kohberger’s DNA was found on a knife sheath close to the bodies of Maddie Mogen and Kaylee Goncalves.

The documents also detailed how a surviving roommate, Dylan Mortensen, came face-to-face with a masked man believed to be Kohbegrer in the hallway of their shared home around the time of the killings, shortly after 4am on November 13.

Mortensen heard what she believed to be her roommate’s cries, left her room and saw a man in a black mask with bushy eyebrows. She froze with fear, and watched as he walked past, then waited six hours before calling cops.

Further details on Kohberger’s alleged stalking of his victims were shared. His phone was found to have been in the vicinity of their Moscow home 12 times before the November murders, starting in mid-August.

The family of Kaylee Goncalves was also in court, with her mother shaking her head and sobbing as the homicide charge related to her daughter was read out.