It’s best known for appearing in the 1985 American sci-fi classic ‘Back to the Future’.

Now, the DeLorean motor car is set to make a comeback, as an environmentally-friendly all-electric vehicle.

A slatted rear window and futuristic red tail lights also provide a fitting tribute to the original, which was memorably modified to work as a time machine in ‘Back to the Future’.

It can reach 88 miles per hour in just 4.35 seconds – but sadly won’t allow you to traverse the space-time continuum.

DeLorean Motor Company has revealed the first images of the Alpha 5 electric vehicle, which is set to be officially revealed this summer 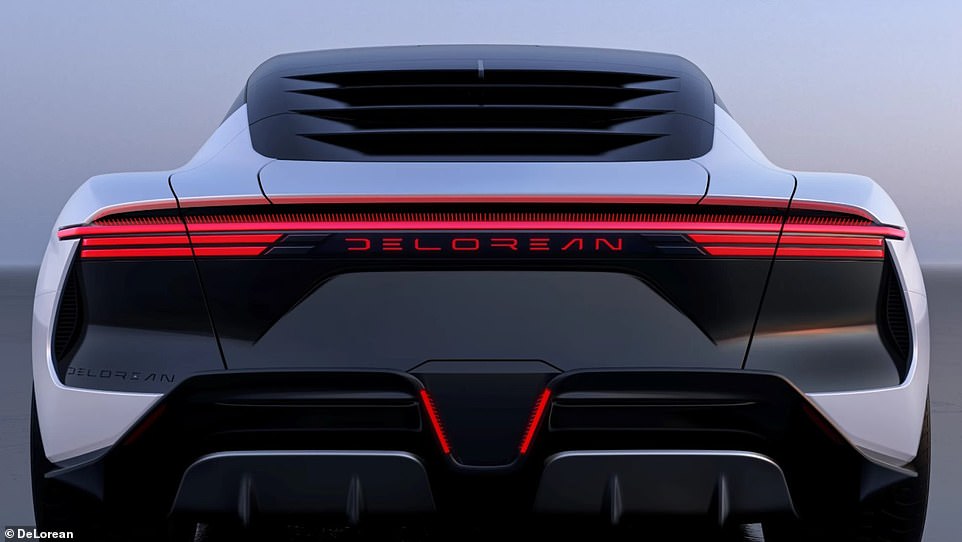 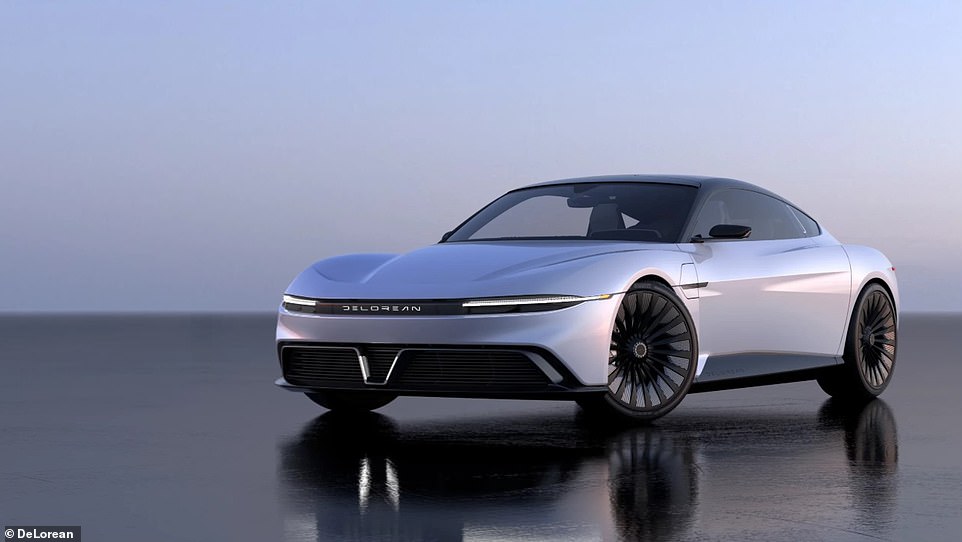 The new vehicle will be able to reach 60mph in about 2.99 seconds or 88mph in 4.35 seconds. 88mph is the speed the modified car in ‘Back to the Future’ had to reach to activate time travel 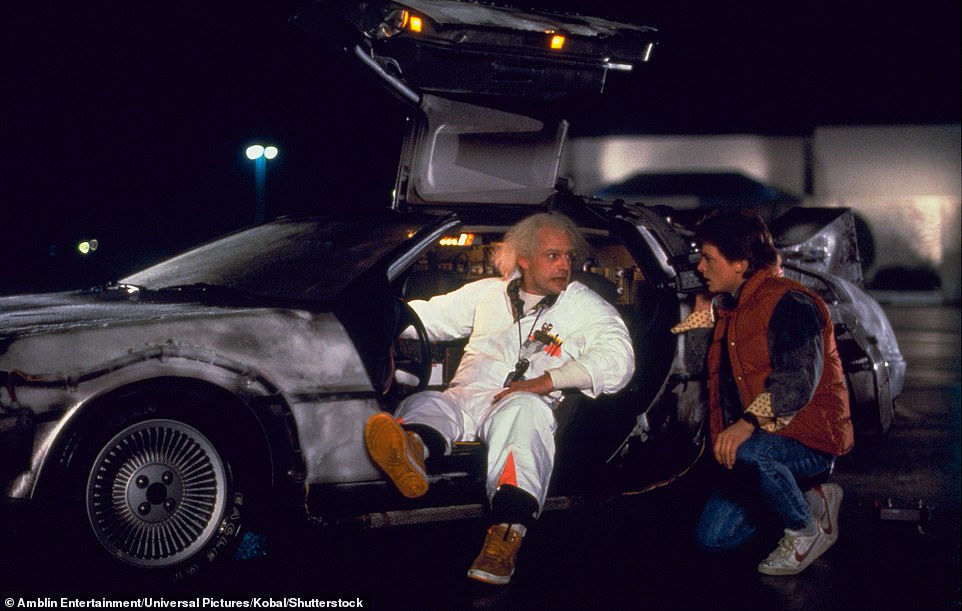 The DeLorean car is probably best known for appearing in the 1985 American sci-fi classic ‘Back to the Future’. Pictured are actors Michael J. Fox as Marty McFly and Christopher Lloyd as Emmett ‘Doc’ Brown with the car 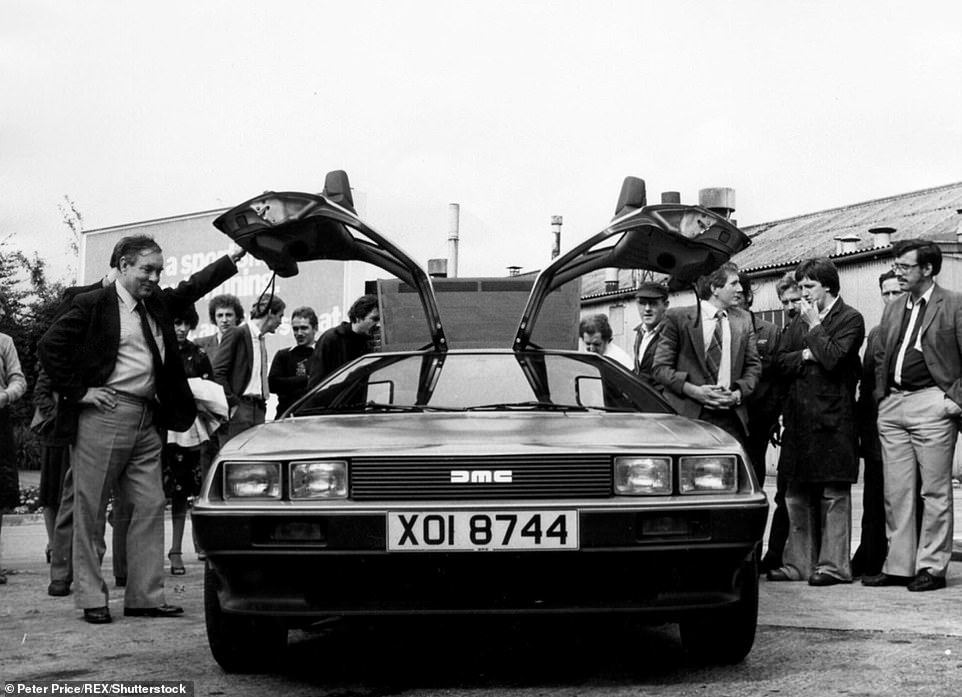 Photo of the original DeLorean motor car back in 1981. The company that developed the original went bankrupt in 1982, only seven years after it was established

The company that developed the original DeLorean car – DeLorean Motor Company, or DMC – went bankrupt in 1982.

But the rights to the DeLorean brand were purchased back in the 1990s by a new company that adopted the same name.

After focusing on services and restoration for nearly 30 years, the new DeLorean Motor Company is preparing the release of the new all-electric vehicle.

‘There was this enormous responsibility to make sure we honoured the history of the DeLorean brand, but an even greater responsibility in curating its future,’ said Troy Beetz, chief marketing officer for the new Delorean.

‘I think we did both with the Alpha5.’

The firm refers to the beloved original as ‘DMC-12’, which was the name given internally during development over 40 years ago, even though it was never used in sales or marketing.

‘The DMC-12 was never meant to be a static interpretation of the brand, the brand would constantly evolve,’ it says on its website.

‘DMC is and always was in constant evolution. An icon is validated over time but to constantly reimagine mobility allows new icons to come into existence.’

The new renders show that the car seats four people, including the driver, with comfy-looking arm rests between the seats in both the front and back.

There are also two interactive displays to show the driver information such as speed and battery level, but otherwise the dashboard is clean and minimalist. 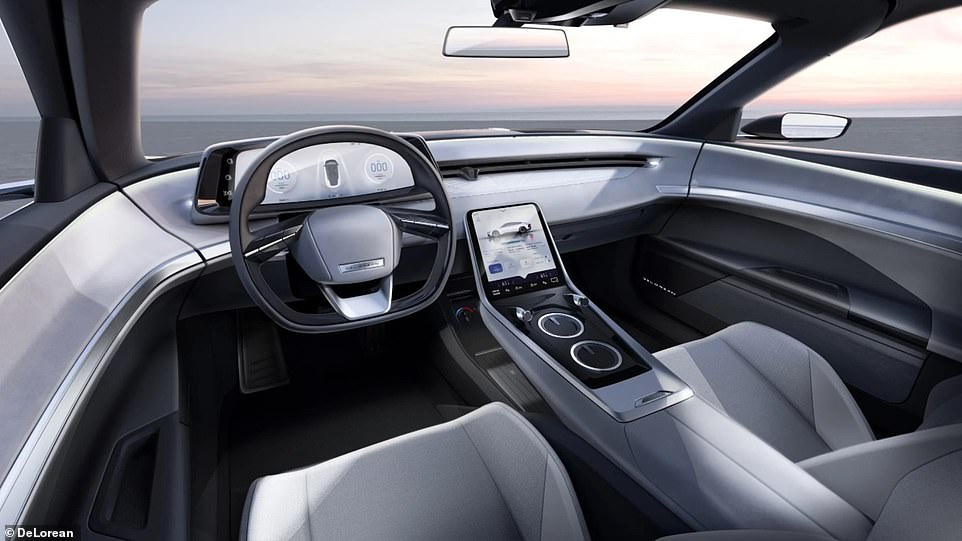 There are also two interactive displays to show the driver information such as speed and battery level, but otherwise the dashboard is clean and minimalist 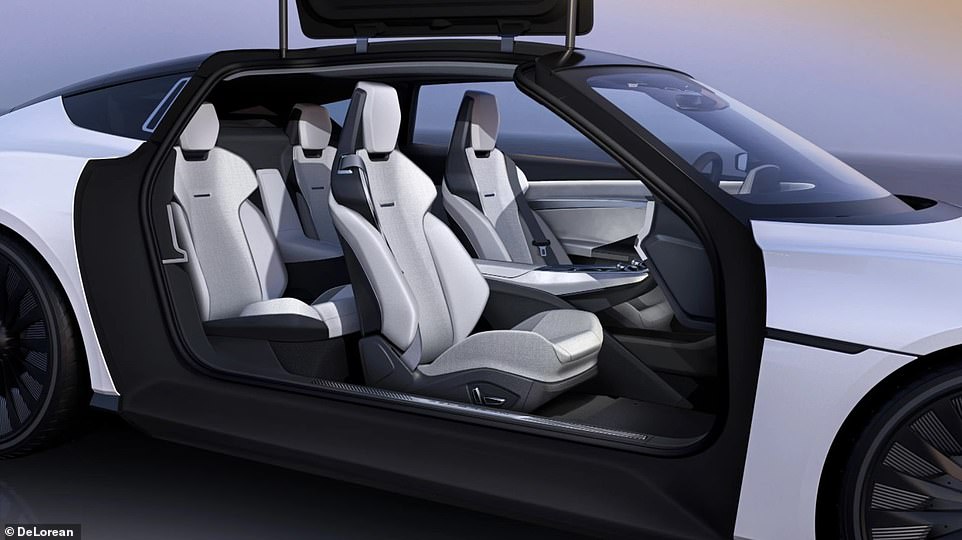 The upcoming car seats four people, including the driver, with comfy-looking arm rests between the seats in both the front and back 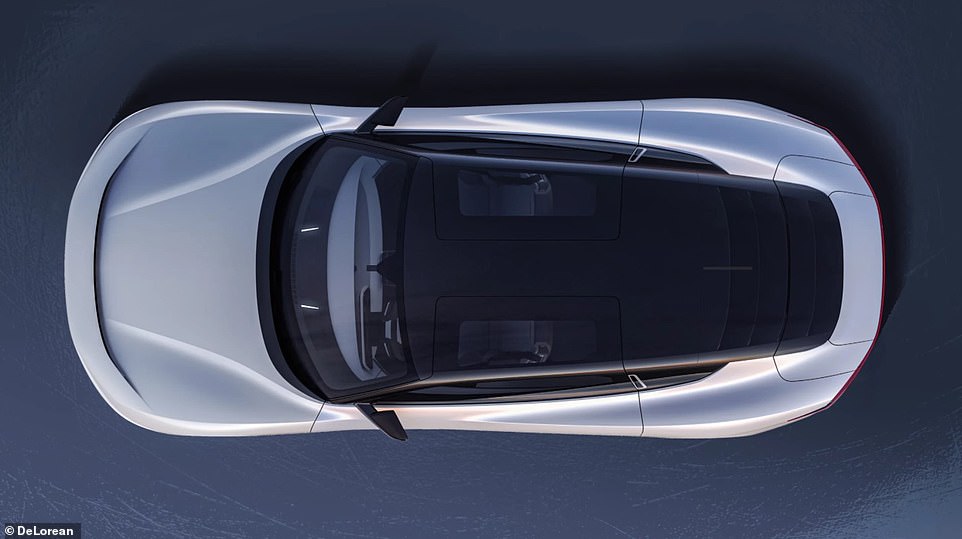 Bird’s eye view of the car, which will be officially revealed at the 71st Pebble Beach Concours d’Elegance in Pebble Beach, California, on August 18

Additionally, Alpha 5 will come with a 100kWh battery, which will cover a range of more than 300 miles on a full charge.

The car’s official reveal will be at the 71st Pebble Beach Concours d’Elegance in Pebble Beach, California, on August 18, but it might not be available to consumers until next year or later.

The original DeLorean Motor Company only manufactured the one car during its brief existence, from 1975 to 1982.

The company went bankrupt three years before the vehicle made a memorable appearance on the big screen, playing a key part in ‘Back to the Future’.

In the film, the eccentric scientist Emmett ‘Doc’ Brown creates a time machine built from a modified DeLorean, which uses plutonium to power a fictional device called a ‘flux capacitor’ to travel back to 1955.

The modified car needs to travel at exactly 88 miles per hour (142 km/h) to initiate time travel, which is the speed Alpha 5 can reach in just 4.35 seconds. 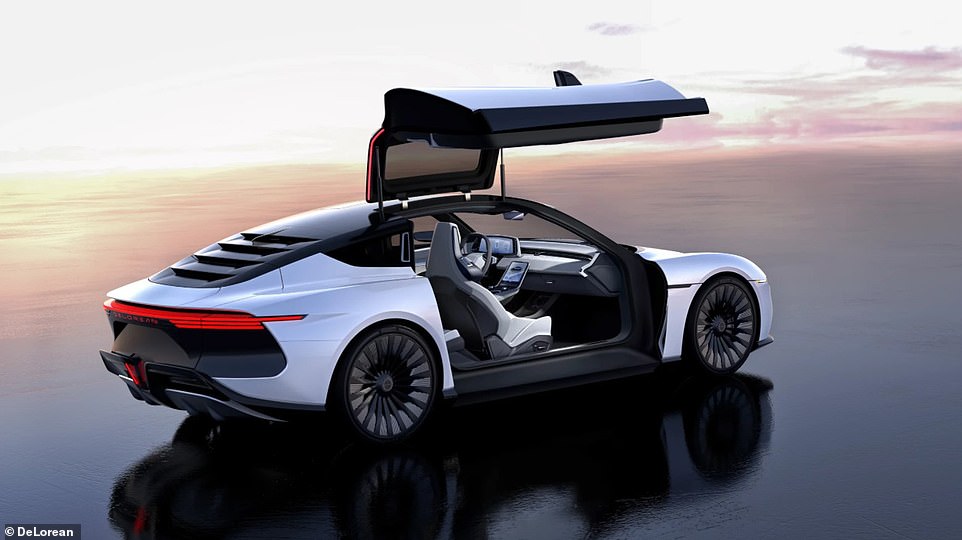 Gull-wing doors are hinged at the roof rather than the side, which can make entry and exit easier and allow it to open in tight spaces 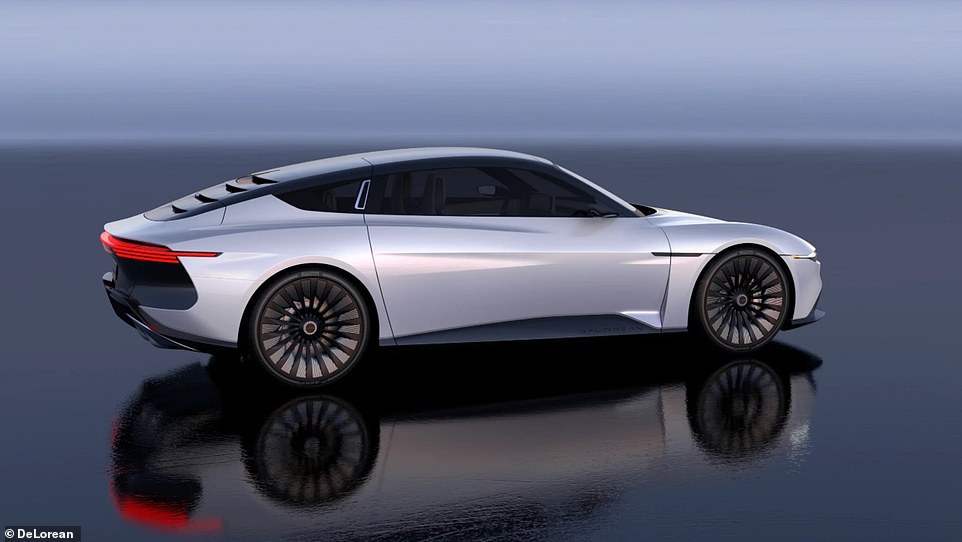 Alpha 5 will come with a 100kWh battery, which will cover a range of more than 300 miles on a full charge, according to the company 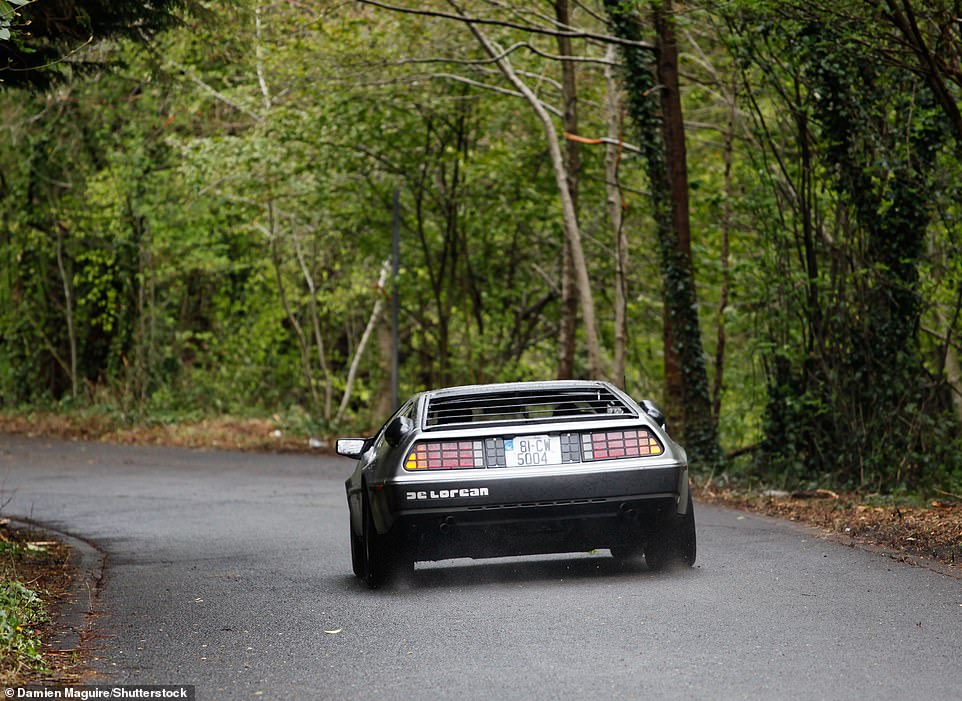 The original DeLorean Motor Company only manufactured the one car during its brief existence, from 1975 to 1982 – a stainless steel DeLorean sports car featuring gull-wing doors (pictured) 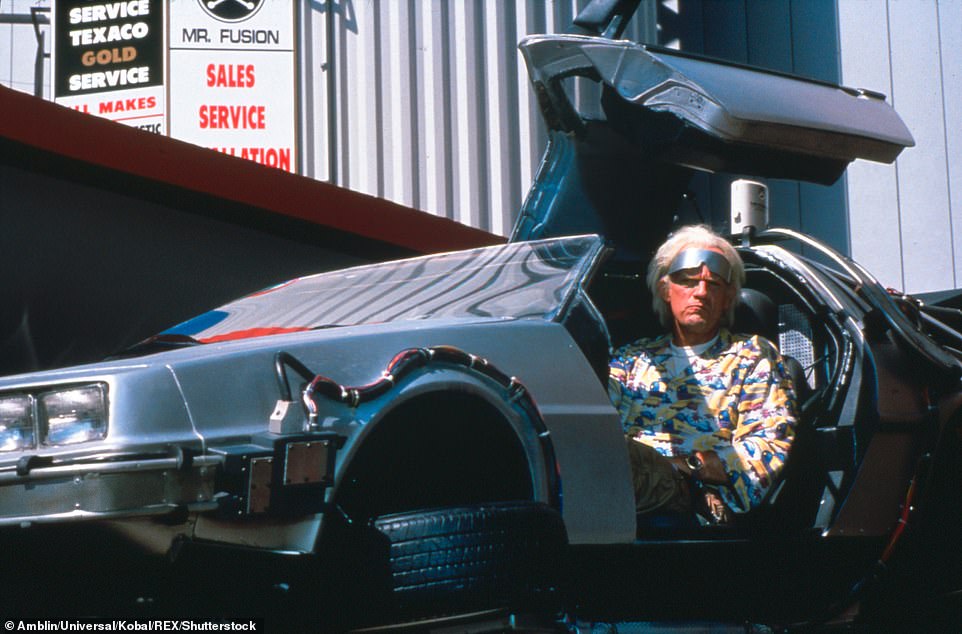 Christopher Lloyd appears as Emmett ‘Doc’ Brown with the car in the 1989 sequel ‘Back To The Future II’. In this film, the DeLorean is used to travel to the future – October 21, 2015

German carmaker Volkswagen has unveiled its all-electric ID Buzz vehicle, a modern take on the iconic ‘hippy’ camper van from the 1960s, which is set for release later in 2022.

Unveiled in Hamburg in March, the ID Buzz can seat five passengers including the driver and has additional room for 1,121 litres of luggage for retro holiday trips.

The eco-friendly car is made with recycled synthetic materials and the interior is completely free of any real leather – making it totally ‘animal-free’ but still giving a luxury, ‘lounge-like’ feel.

Autonomous features include the ‘Car2X’, which uses signals from other vehicles and the transport infrastructure to spot hazards in real time, and ‘Memory Function’ for automated parking on a previously saved route.

Volkswagen believes the five-seater van will be part of ‘the future of inner-city transport’, where trips are shared by multiple passengers in vehicles hailed by apps.