Ian McKellen, pictured, as butler Firs in The Cherry Orchard play, taking a more age-appropriate (and much less challenging) role

After the rigours of playing the whippersnapper Hamlet — a character some 60 years his junior — Ian McKellen steps into The Cherry Orchard like a pair of old slippers.

He takes the more age-appropriate (and much less challenging) role of the doddery old butler in a Russian country house — a tiny part for the 82-year-old theatrical knight in comparison to Shakespeare’s Prince of Denmark. Yet even here, McKellen weaves his Gandalfian magic.

Annis is Ranyevskaya, queen of a highly-strung cast of characters. Sweeping in from Paris at the start wearing fur and velvet, she swears she might die of joy — and warmly embraces a big old bookcase, to demonstrate just how happy she is to be back in the family home.

McKellen’s Firs fusses about her, chuckling quietly to himself and muttering non-sequiturs. When we first see him, sporting a big hat, he looks like a Russian Orthodox patriarch.

But once the hat’s off, we see a shaven head — which with his grey hipster beard gives him the air of an antique barista.

Shaw, meanwhile, plays Ranyevskaya’s nemesis, Lopakhin: a self-made former peasant who promises to pay her debts by buying her beloved home, including the picturesque cherry orchard. 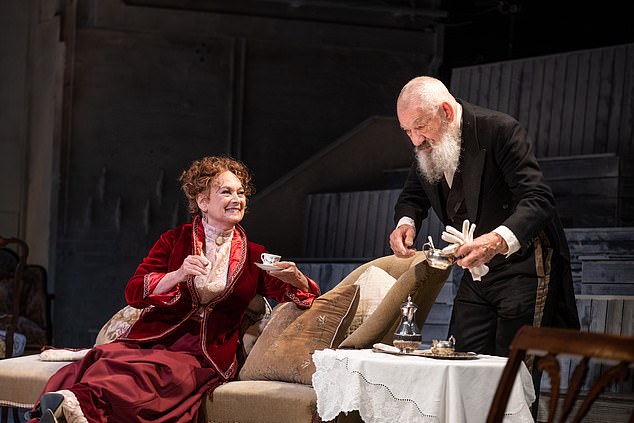 Francesca Annis, left, plays Ranyevskaya, the queen of a highly-strung cast of characters. McKellen, right, as butler Firs, fussing about her, chuckles quietly to himself and mutters non-sequiturs

She cannot bear his plain Yorkshire ways; and his bluff pride is eventually revealed to be just a cover, hiding the simmering rage he feels at her family’s treatment of his ancestors.

Shaw’s age though does complicate (for us viewers) his chemistry with Kezrena James, who plays his much younger, lovelorn admirer.

Still, The Cherry Orchard is a play that’s less about the story; and more a set of character sketches.

These characters are given to rambling philosophising, emotional speculations and psychological inventories of themselves.

The result is a melancholy soap opera or comedy of manners, following the Scheherazade principle that if you can only keep talking, bad things may never happen.

Daws gives a beautifully dotty turn as a Ken Dodd-ish eccentric neighbour who lives by his luck; while Seagrove plays Annis’s gasbag of a brother Gaev, not so much clinging to his youth as dodging his old age. 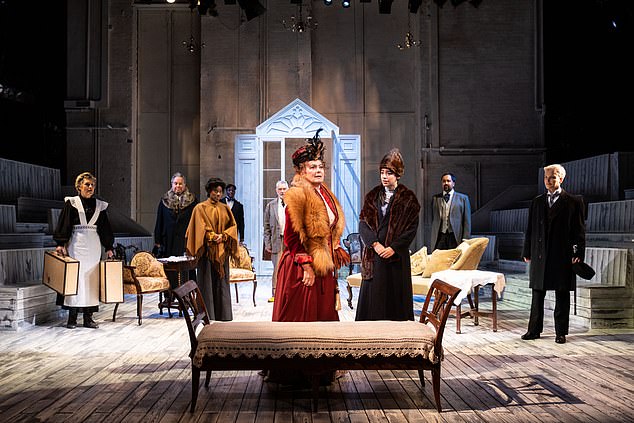 Cast of The Cherry Orchard, pictured, performing at Theatre Royal in Windsor, with the audience sat on the stage as well as in the auditorium allows you to feel part of the action

With the other, younger characters threatening to make the same mistakes — including Alis Wyn Davies as a sybaritic servant and Ben Allen as her lofty, student admirer — Sean Matthias’s production strikes an amiably tragic tone.

Having the audience seated on the stage as well as in the auditorium allows us to feel part of the action, and to imagine these rambling, incomplete, long-gone lives to be so much like our own.

But the real feat, in a play with 15 characters vying for attention, is the directorial juggling required to keep all the balls in the air. Matthias drops none of them, and rounds off what has surely been a very happy and hugely enjoyable stay for McKellen and co in Windsor.

A lifeless nod to 1970s nostalgia

Drawn by the promise of intravenous 70s nostalgia, Covid vaccination groups one through three congregated in Bath’s Theatre Royal for a sitcom seance.

‘The classic comedy, live on stage!’ posters promised — albeit with a tenth of the jokes and none of the original cast. Still — good title.

Tom, Barbara, Margo and Jerry are reincarnated, starting at the beginning with Tom (Rufus Hound) jacking in his job to live a life of self-sufficiency. 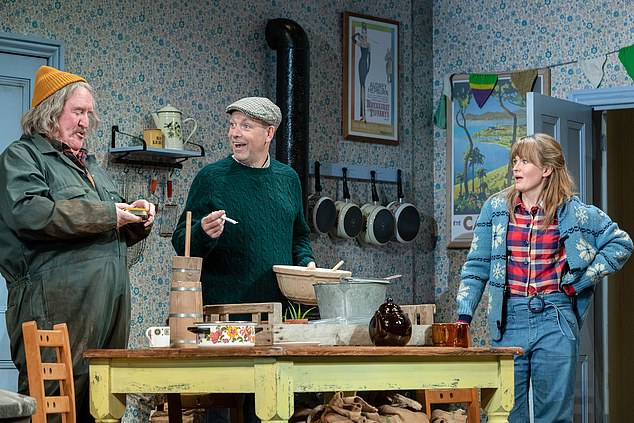 We then plod into the night with a dinner party, a long scene about a dying piglet and discussion of Margo’s amateur stint in The Sound Of Music.

I was practically raised on Good Life TV re-runs with nanny UK Gold, but my excitement quickly bled out.

If Surbiton’s actual am-dram society had been responsible for this evening, I’d have wished them well.

But on a professional stage, with fat ticket prices, this is desperate stuff.

Jeremy Sams’s adaptation is intensely dull. As a tribute to the sitcom, it lacks the satisfying situations and wisecrack comedy.

As a piece of theatre, it’s as if a writer had Alan Ayckbourn’s style described to them. 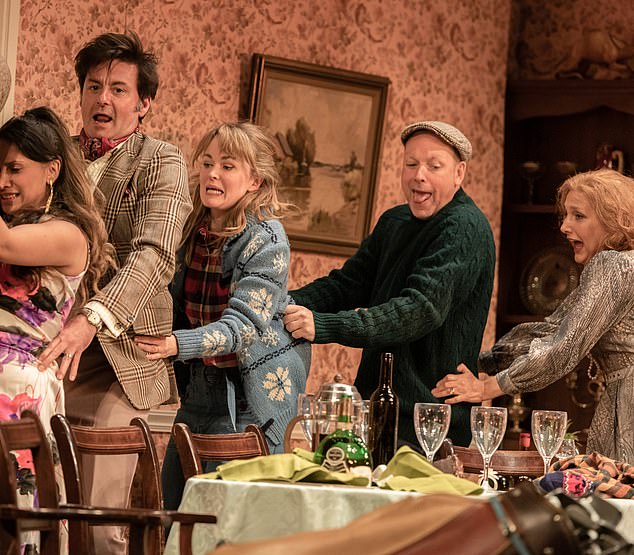 Cast of The Good Life at the Royal Theatre in Bath, adapting the BBC sitcom that ran from 1975 to 1978

So there’s gentle amusement, without any of Ayckbourn’s dark wit and rich characterisation.

The cast are hammy and largely just attempt impressions, with Dominic Rowan’s Jerry the best. But even then, Jerry’s depth and frustration are missing.

All this makes me wonder: what’s the point? Who asked for this, aside from producers hoping to cash in on fond memories? It is surely breaking some theatre critic code of honour to advise you to stay home and watch TV re-runs. But do.

Verdict: Prepare to be riled

Here’s a millennial’s howl of frustration at the emotional legacy of long-ago slavery.

A long stage thrusts defiantly into the audience: eventually it’s a shooting range, but first it rolls us into the bedroom and kitchen of two interracial American couples as their old college friendship disintegrates.

Suzan-Lori Parks (a Pulitzer winner) in 2016 called it her ‘angry play’; reworked for this European premiere directed by Polly Findlay it is angrier still, after George Floyd’s murder.

The young people’s hidden attitudes glide like monsters under a smooth veneer of well-meaning wokery. 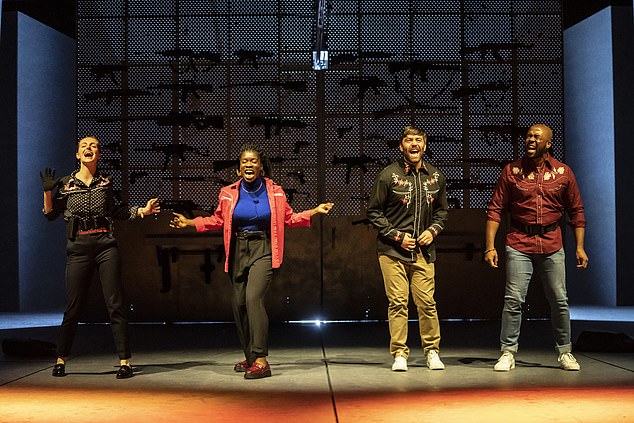 Directed by Polly Findlay and written by Suzan Lori-Parks, White Noise takes an ‘unflinching look at race in the 21st century from both a black and white perspective’

Showily supportive, Ralph is actually seething at losing a promotion to a Sri Lankan.

Meanwhile, Leo has been abused by police. Dawn wants him to sue, but he doesn’t trust the system and instead demands that Ralph buys him as a slave.

‘Back in the day,’ he reckons, a powerful man’s slave would have protection as a chattel. It is mad and tasteless, even for the 40 days Ralph unwillingly agrees to do it.

It plays on, sometimes for laughs but increasingly frighteningly as Ralph gets a taste for being Master. One scene has the whole audience gasping.

It is peppered with monologues, sometimes too long but rich in ideas about racial misunderstanding and the hostility that gets a friendly gesture condemned as ‘white saviour!’. 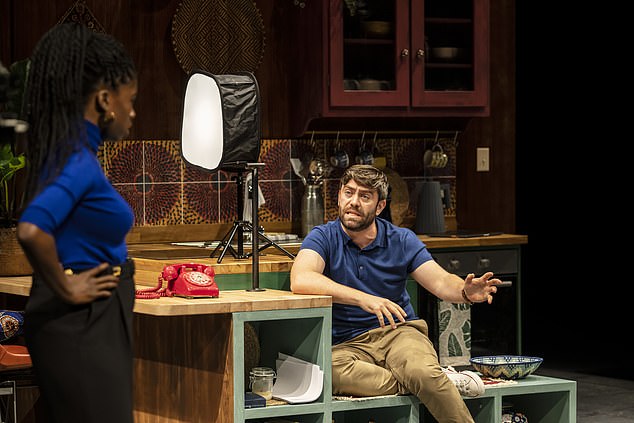 It tangles with other human discomforts: unequal relationships, money and class.

Ken Nwosu is amazing as Leo, Helena Wilson every inch the liberal lawyer in a permanent bind of guilt, and Faith Omole beautifully evokes the irritation of a sophisticated black woman who, to get attention for her show, has to play the cartoonish bouncy diva her audience expect.

It is a stretch to believe how rapidly the slavemaster experience turns Ralph (James Corrigan) into an utter fascist, but that’s the only cavil.

If the message is that none of us can escape our slaver-or-saviour mentality, it’s a grim one.

On the other hand — irrespective of race — you notice that it’s the men who go nuts, and the women who don’t. Make of that what you will.

AYUB Khan-Din’s East Is East is a very different, but no less painful family drama than Chekhov’s Cherry Orchard. This 25th anniversary production is staged in a full spectrum of 1970s’ colours — from beige to brown — and remains a brilliantly funny, thought-provoking insight into the dark ages of racial integration in Salford.

Tony Jayawardena is the warm but overbearing father and chip shop owner George, who insists on imposing his Pakistani values on his insubordinate family.

He denounces Britain as ‘no fit country to bring up girls’, but Sophie Stanton, as his loving but long-suffering wife and mother of his seven children, returns his anti-British barbs with interest — scoffing at George’s other wife in Pakistan.

I particularly loved Noah Manzoor as the youngest boy with the nervous twitch who hides in a coal shed and refuses to take off his filthy parka. His story amplifies the agonies of any child facing puberty — as well as the play’s conflicts between East and West.

There is strong racist language, and very dark themes (touching on domestic violence), but Amy-Leigh Hickman is a hoot as the fireball teenage daughter Meenah, who is the unofficial boss of her older brothers, caught in their father’s plan to marry them off.

And the always terrific Rachel Lumberg is fabulously uninhibited as the kids’ Auntie Annie, who sits on the sofa puffing fags and dispensing wisdom. Not just Salford in the 1970s, it could be any family, any time, anywhere.

THE warmly intimate setting of the Globe’s indoor stage is a deceptively charming setting for a new adaptation of some old tales, from Ovid. The Biblical commandment ‘let there be light’ at the start cues the illumination of the candlelit stage for the Roman poet’s creation story, told by a cast of four all dressed in white — like ministering angels, or beauty therapists.

But the material that follows is pretty dark, including the myth of the Roman god of wine and disorder, Bacchus, who drives the women of Thebes to dismember their King Pentheus when he refuses to recognise him as a deity. Or the one about the goddess Diana, who turns the hunter Actaeon into a stag, so he can be torn apart by his dogs, after he chances on Diana bathing with her nymphs.

Elsewhere, Ovid’s themes of incest and rape are X-rated, yet the tales are oddly sanitised by the flippant tone of Sean Holmes and Holly Race Roughan’s production.

There’s even an implicit tut-tut for antiquity’s sexual politics, which are a serious misfit with today’s notions of equality. When a ghost demands the sacrifice of Hecuba’s daughter to atone for the death of Achilles, actor-narrator Charlie Josephine quips: ‘And no one questions this!?’

Writers Sami Ibrahim, Laura Lomas and Sabrina Mahfouz were presumably commissioned to adapt these stories because of Ovid’s influence on Shakespeare. But the Bard had a much better feel for Ovid’s ability to charm, not chide.

Although the young cast perform with gusto, Ovid was no moralist. His tales of transformation or ‘metamorphosis’, are about how one thing grows out of another — for good or evil. They don’t work nearly so well as cautionary tales.