Top jockey Luke Nolen has produced ‘a gun run’ on I Wish I Win, taking out the $10million Golden Eagle at Rosehill Racecourse on Saturday afternoon.

The iconic Black Caviar pairing of Nolen and trainer Peter Moody got the four-year-old gelding over the line, clinging on to hold off Hugh Bowman and the fast-finishing Fangirl, with Gypsy Goddess nabbing third.

It was a fairytale win for Nolen in particular, who has spent significant chunks of time out due to injury, while Moody’s return to racing has shown despite the smaller operation, he can win the biggest of big races.

The fourth richest race on turf in the world, the Golden Eagle was the brainchild of Racing NSW supremo Peter V’landys, and punters, bathed in glorious Sydney sunshine, flocked to the track for the fourth edition of the race – and a jubilant Moody was one of those in attendance. 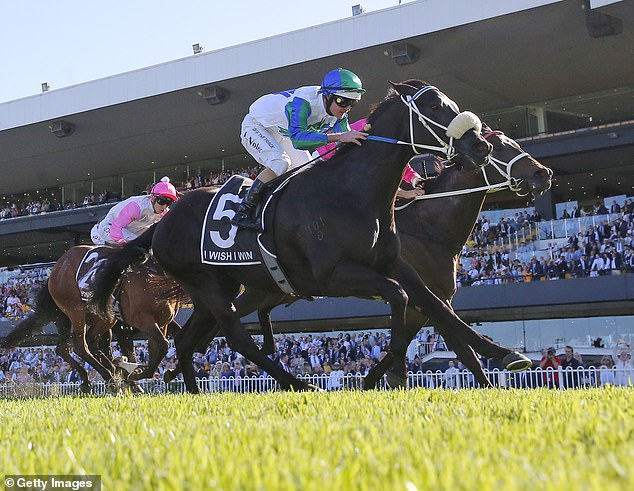 ‘It is a great thrill. Congratulations to the team. We had faith in this horse … Luke gave him a gun run today, presented him at the right time and got the job done, God bless him,’ an emotional Moody said after the race on Channel 7’s broadcast.

Nolen’s happiness, and relief, was plain to see after the race, with the 42-year-old Black Caviar jockey thrilled to be back in the winners stall after a difficult few years.