A woman whose breast implant fell out of her chest weeks after botched surgery in Turkey, has told how she was left ‘depressed’ by the complications.

Kelly Young, from New Malden, Greater London splashed out £3,700 for her second boob job in September at a cut-price clinic she found quickly, so she could fly out with a friend who was also having work done to her teeth.

The 48-year-old had undergone surgery to boost her cup size to a double-D in the UK 24 years ago, but her right implant ruptured in 2018.

Desperate to get her body back in shape, after ‘waiting years to have it done’, she decided to have her implants replaced as well as an uplift.

Kelly Young (pictured pre-surgery in September), from New Malden, Greater London splashed out £3,700 for her second boob job in September at a cut-price clinic she found quickly, so she could fly out with a friend who was also having work done to her teeth 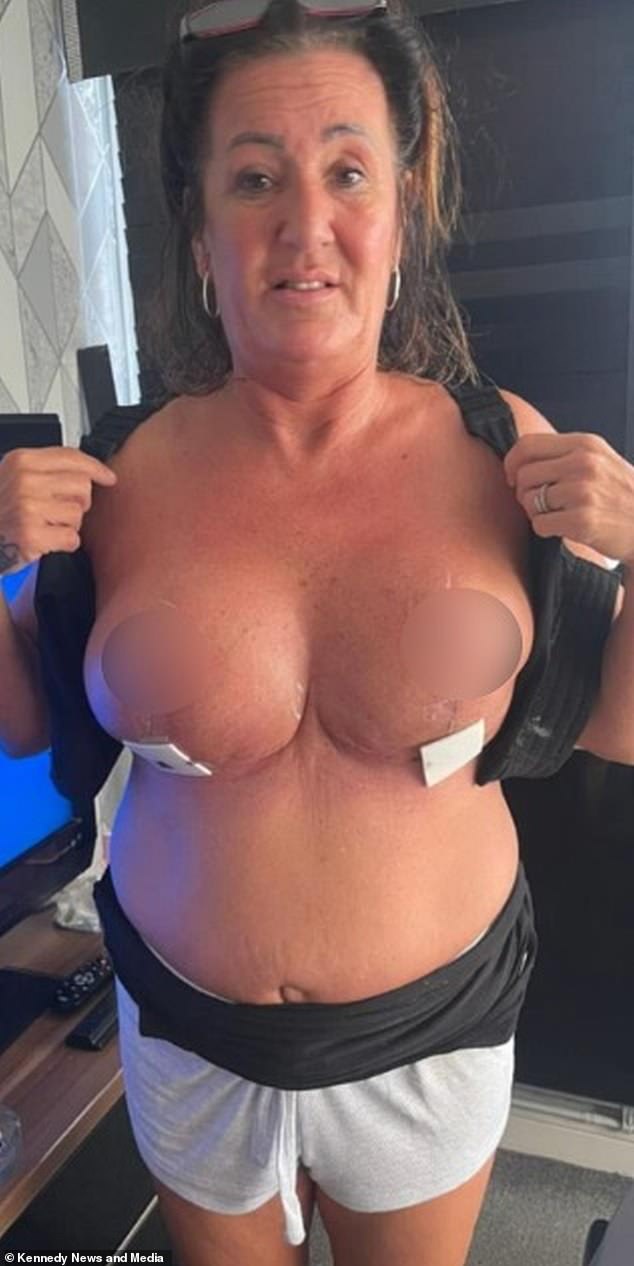 The 48-year-old had undergone surgery to boost her cup size to a double-D in the UK 24 years ago, but her right implant ruptured in 2018

Admitting to not doing much research beforehand, Ms Young (pictured post-surgery in December) chose the clinic because ‘Turkey was the cheapest place to go to get it done’

What are the dangers of getting surgery abroad?

Thousands of Britons flock to destinations like Turkey every year for bargain tummy tucks, boob jobs and butt lifts.

But patients or the NHS often end up footing the bill for surgical corrections.

This can include removing dead tissue from improperly cleaned wounds, correcting poor stitching and taking out surgical objects like latex gloves.

And at least 20 Brits have died in Turkey alone following surgery, including mother-of-three Leah Cambridge who had a botched Brazilian Bum Lift in 2018.

Some surgeons in the country will perform procedures deemed too dangerous or unethical in Britain.

Others will skimp on aftercare, according to campaigners, which can leave patients vulnerable to dangerous complications.

Yet despite all the warnings, the industry has continued to boom, with hundreds of medical tourism agencies now promising boob jobs and liposuctions thousands of pounds cheaper than UK providers.

Turkey is not inherently more dangerous than other surgical tourism hotspots.

But cheap flights between it and the UK — as well as the rise of the trend combining cosmetic surgery with a holiday — have made it one of the leading destinations for Britons looking to go under the knife.

In 2016 alone, almost 12,000 Britons flew to out to Turkey for medical care, making it one of the most popular destinations.

Admitting to not doing much research beforehand, Ms Young chose the clinic because ‘Turkey was the cheapest place to go to get it done’.

Typically, breast implant surgery costs around £3,500 to £8,000 in the UK. This does not usually include the cost of consultations or follow-up care.

Discussing her ordeal, she said: ‘I didn’t think there would be complications and I didn’t think that if there was, seven weeks later they would just tell me I couldn’t have any more surgery.’

Within days of returning home in September, the scar underneath her right breast had began to open up and the implant – covered in pus – was poking out of it.

Ms Young, a mother-of-two added: ‘When I got back, my daughter went to change my dressing and said the stitches had come undone and it was weeping.

‘My doctor said it was infected and put me on antibiotics. I was seeing the district nurses every day to keep an eye on it and dress it. It started oozing more and getting bigger.

‘They had to pack wadding inside the hole daily to stop it getting bigger then they couldn’t do anymore.

It was too big and getting worse everyday so I had to go to A&E.’

Despite being advised by an NHS breast surgeon not to fly back to Turkey, she jetted back in November for revision surgery.

‘I had to get on the plane with my implant hanging out, I was frightened’, she added.

But her surgeon advised her ‘it was normal’ and would remain this way ‘for a few more days’, so chose to fly home, she claimed.

But when she found a second hole in December that expanded day-by-day, she was told by a UK breast surgeon that her second implant had become infected and she should wait at least six months before undergoing further implant treatment.

‘I was sick of having holes in my boobs and having them dressed every day,’ she said.

‘So I went back to Turkey. They said there was nothing they could do, they’d take it out and I shouldn’t have any more treatment, no uplift or anything.’

‘He said I had very little breast and some sagging skin and that was it. I went home because I was depressed out there.’

After having the implants removed, Ms Young revealed she has now been prescribed antidepressants and is looking for another surgeon to fix the damage as her confidence has been shattered.

While she was not charged for the two revision operations, Ms Young forked out £6,200 altogether on the initial surgery, flights and accommodation.

‘I’m very unhappy with them, I feel like a 12-year-old again. I don’t let my boyfriend see me, everyone knows me with my boobs,’ she said.

‘I’ve got three lots of scarring with a flat chest. I feel like a different person.

‘I have to get them done, I wouldn’t be able to wear a bikini – summer would be a nightmare.’

She added: ‘People need to do research, look at all the complications that can occur and make sure they don’t pay in cash because if you pay by card you have more rights.’

Why your mocktail is NOT the health kick you think it is this January: Diet experts reveal how fake margaritas and espresso martinis can be more sugary than a can of Coca Cola

Would YOU get a ‘vampire facial’ for your vagina? Four of the strangest intimate treatments available to women in 2023

Exercise WON’T help you lose weight, says top diet expert… who says you should follow this advice to beat the bulge