EXPRESS INFORMER > Business & Finances > I paid £255 for unwanted Christmas gifts, then sold them on eBay for £1,000

Shoppers can get discounts of up to 80 per cent on everything from brand new sofas and washing machines to trainers and clothes by taking advantage of a deluge in returned stock. However, the best deals are often not on retailers’ own websites but can be found on lesser-known outlets that specialise in returned goods.

Retailers are currently being inundated with stock, with shoppers sending back millions of pounds worth of unwanted Christmas presents and purchases they have decided against.

The volume of returns is particularly high this year – up 57 per cent on Christmas 2021, according to courier experts parcelLab. Stretched household finances mean that people are more likely to decide they cannot afford to hold on to items they have purchased – and to return or exchange unwanted Christmas gifts for something they really need or like.

Profits: Holly Smith buys pallets of goods and then sells them on eBay

It’s also increasingly common for shoppers to order several items of clothes online to try on at home before sending back all but one or two.

As a result, retailers are sitting on mounds of last season’s stock that is hard to sell at a time when new ranges come in. So instead of battling to resell items through their own shops and websites, they flog them via resale channels at knockdown prices. This means there is a bumper haul this year for those who know where to look.

Boxes may have been opened, or the packaging may be slightly scuffed, but goods are often in perfect condition. Crucially, buyers also have some consumer protections if something is wrong with their purchase.

Here are some of the ‘secret’ locations you can find an unwanted Christmas present bargain.

Returned Amazon goods – at half the normal price

When goods are returned to online retail giant Amazon, they often end up on its Amazon Warehouse webpage to be sold on at up to half the usual cost.

Amazon is upfront about the condition of these items and will state whether the packaging is intact and if there are any imperfections. It also says it checks the quality of all items before selling them on and tests and repairs them if necessary.

We have found an ASUS Vivobook 15 laptop for £340 – it normally sells for £499. It has a couple of small cosmetic scratches and the packaging is a bit scuffed. A Tower Xpress Pro Combo air fryer with some minor scuffs is on sale for £116 – its normal retail price is £139.

Cheap bulk buys – but prepare for a lucky dip

Sometimes retailers have so much stock to clear that they sell it in bulk as pallets. Shoppers can pick up a number of items in one go for a fraction of their normal retail price. Gem Wholesale, Marthill International and BStock are three such pallet sellers.

However, the process can be a bit of a lucky dip because you don’t always know the full details of the items you are buying in advance.

Brief descriptions of the types of items and some images are often provided. We found a pallet of four children’s bikes with a retail value of £590 on offer for £165 on Marthill International. The four bike models are listed.

Similarly, there was a pallet of high street furniture, including chests of drawers, desks and chairs, with a retail value of £1,365 for £327.

Shopping expert Holly Smith, of Great Yarmouth in Norfolk, has purchased a dozen pallets in the past couple of years through Gem Wholesale and sold the contents on the auction website eBay for profit. ‘I’m excited because the next few weeks will be when all the Christmas rejects that were returned are sold off,’ she says. 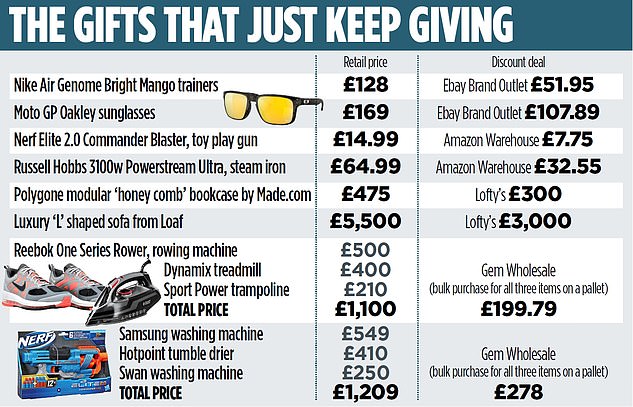 The 37-year-old mum of four says that some electrical items she has bought have had faults but that she is lucky to have a handyman father who can fix things.

She adds: ‘Returns from online clothes retailers such as Very are most likely to be gems. Customers tend to buy and return lots of goods, and there is rarely anything wrong with them.’

Holly spent £255 on a pallet described as ‘Christmas toys and more’. It contained two dozen items, including several Lego sets – one of which was a Star Wars Millennium Falcon battleship – a ‘Stormbreaker’ Avengers toy weapon, a child’s scooter, dolls and cuddly toys. She sold the items separately for around £1,000 on eBay.

Cut-price clothes that are no longer in stores

Online marketplace eBay has a ‘brand outlet’ arm where major retailers shift old stock that they can no longer sell in store. You can get up to 70 per cent off new clothes from popular brands such as Superdry, Adidas, Dorothy Perkins and Marks & Spencer.

…and you can even find bargains in person

A number of bricks-and-mortar retailers also specialise in returned goods. These include Enlightenments in Kirkcaldy, Fife, as well as Trade Secret, which has warehouses in Northwich, Cheshire, and Adderbury, Oxfordshire. 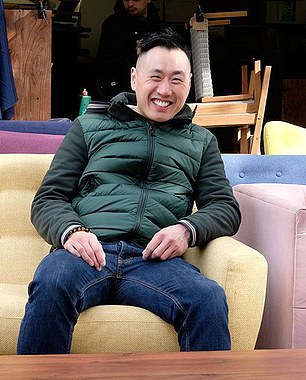 Lofty’s Furniture in East London sells returns from retailers such as Loaf, Anthropologie and the online shop Made.com, which collapsed into administration in November.

The hangar-like showroom is packed full of light fittings, wardrobes, rugs and dozens of sofas.

Tony Wong, manager at Lofty’s, says: ‘There is nothing wrong with any of our stock. It is as good as new – just not what a customer wanted or is unsold stock.’ He adds that shoppers are able to visit his store and try the furniture before they buy it, saying: ‘You cannot know how comfortable a sofa really feels until you sit on it.’

Sarah Gregory, 35, a prop buyer from London, often visits Lofty’s in search of a bargain. She says: ‘I recommend it to my friends when they move home, especially to first-time buyers, because you can find great sofas for hundreds of pounds less than going somewhere like John Lewis.’

Your rights when buying returns…