‘I know it’s a STUPID rule’: NRL referee stops short of blasting footy laws after ridiculous penalty call against Broncos – but only because he realised his microphone was on!

An NRL referee stopped short of blasting the game’s laws during a very awkward moment on Thursday night – but he said enough to give fans an insight as to his views on the rules.

Grant Atkins penalised Broncos star Herbie Farnworth for diving on the ball from the marker in the 35th minute of Brisbane’s game against South Sydney after he had tackled Keaon Koloamatangi.

Damien Cook was late getting to the ball and Farnworth pounced, appearing to win the ball although referee Atkins blew up straightaway. 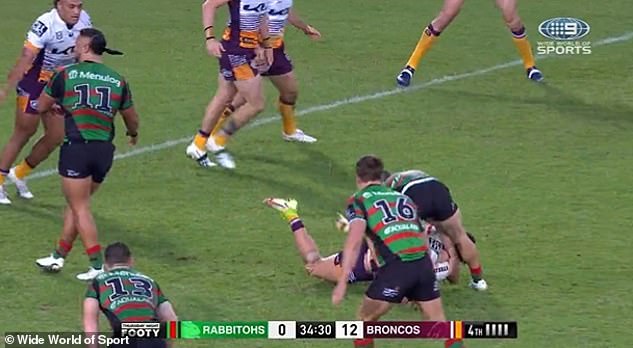 ‘You can’t do that mate,’ the official said to the Broncos star after awarding a penalty to the Bunnies.

‘The ball is in the game so you can’t just dive in behind the ruck. He has got to try and pick it up and run.

‘He dived straight on the ball. I know it is a stu. . . (Atkins stops himself from finishing his sentence, aware that he is wearing a microphone). It is just the laws of the game. You can’t dive on a loose ball in there.’

However, rugby fans and pundits heard the embarrassing slip of the tongue. 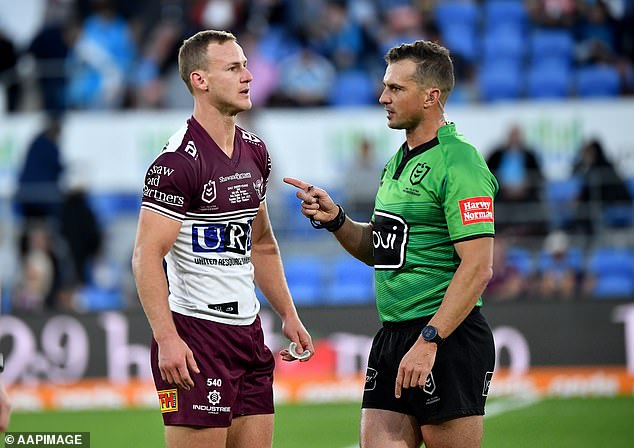 ‘You heard Grant Atkins about to say, I know it is a stupid rule,’ Warren Smith said on Fox League.

‘And he caught himself and said, you can’t just dive on the ball there, even though it is sitting there.

‘But he did stop himself from saying, I know it is a stupid rule.’

Footy legend Greg Alexander added: ‘I don’t think he caught himself. I think we heard that.’

Despite Atkins’ slip up, he went onto have a strong game in the middle and earned praise on social media as ‘the best referee in the game’, with esteemed journalist Buzz Rothfield backing the official.

Atkins clearly doesn’t think much of the diving rule and fans took to Twitter to hit out at the seemingly nonsensical law, blasting the loophole whereby Souths were rewarded for being disorganised in attack.

‘We got penalised because Souths couldn’t sort themselves out,’ one fan posted on Twitter. Makes no sense whatsoever.

‘Even the ref knows it’s stupid,’ another fan wrote. ‘@NRL needs a full overhaul of the rules to simplify.’