Donald Trump supporters are now looking to his children to run for president in 2024 after Joe Biden’s historic 2020 win Saturday.

With speculation rampant about who might be heir to Trump’s political empire some are turning their attention to adult sons Don Jr., 42, and Eric, 36, as well as daughter Ivanka, 39, who already serves as a White House adviser.

The president also has teenage son Barron, 14, and daughter Tiffany, 27. Presidents must be at least 35 years old.

He added: ‘I guarantee you, if you got 69 million Trump supporters, and you said, ‘Would you be good with Donald Trump and Donald Trump Jr. and Eric Trump and Ivanka Trump as president?’ a lot of people would be 100 percent behind that.’

Others have taken to Twitter, tweeting to Don Jr.: ‘Hope to see you on the ticket in 2024.’ Another said: ‘Please run for 2024!!!’ There is a Facebook group calling for Ivanka’s run and tweets suggesting others believe Eric should run.

That came after Don Jr.  ripped prospective Republican presidential candidates who he accused of a ‘total lack of action’ as his father faced losing the election.

In September Brad Parscale, the former Trump campaign manager, teased the idea of additional presidential runs by the family, saying: ‘The Trumps will be a dynasty that will last for decades.’

And in October Don Jr. suggested his own potential presidential run in 2024, posing with a sign endorsing his candidacy in a photo on Instagram.

‘Oh boy. This was a sign I saw up at the Fallon Nevada Livestock Auction. This will make the lib heads explode,’ Don Jr said in the caption to the Instagram post.’

After nearly four tortured days of counting yielded a victory for Biden on Saturday, Trump was still insisting the race was not over.

He threw out baseless allegations of voter fraud, promised a flurry of legal action and fired off all-caps tweets falsely insisting he’d “WON THIS ELECTION, BY A LOT.”

Donald Trump walks to his motorcade on the South Lawn of the White House on Sunday. With speculation rampant about who might be heir to Trump’s political empire some are turning their attention to adult sons Don Jr. and Eric as well as daughter Ivanka

Trump is not expected to ever formally concede, according to people close to him, but is likely to grudgingly vacate the White House at the end of his term.

His ongoing efforts to paint the election as unfair are seen both as an effort to soothe a bruised ego and to show his loyal base of supporters that he is still fighting.

Biden heads into his first full day as president-elect on Sunday with key staffing decisions to make as the coronavirus rages.

It wasn’t clear if Biden and Trump would meet in coming days, as is the modern tradition. Biden deputy campaign manager Kate Bedingfield told CNN late Saturday that there’s been no contact between Trump’s team and Biden’s.

Trump started his Sunday morning by retweeting support from a prominent legal expert calling for review of the balloting. 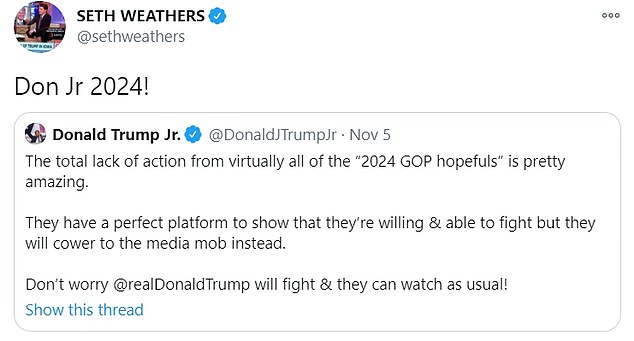 Don Jr. ripped prospective Republican presidential candidates who he accused of a ‘total lack of action’ as his father faced losing the election.

Trump Jr. also sent out a tweet that got flagged by Twitter. He called for Trump to go to ‘total war over this election to expose all of the fraud, cheating, dead/no longer in state voters, that has been going on for far too long. It’s time to clean up this mess & stop looking like a banana republic!’

‘The total lack of action from virtually all of the “2024 GOP hopefuls” is pretty amazing,’ he raged on Twitter. ‘They have a perfect platform to show that they’re willing & able to fight but they will cower to the media mob instead.’

‘Don’t worry @RealDonaldTrump will fight & they can watch as usual!’ concluded Don Jr., an avid hunter who helps run the Trump Organization.

Trump’s eldest sons launched a fusillade of morning tweets claiming their father’s defeat was fraudulent Sunday, in a sign of a split from their brother-in-law Jared Kushner.

Don Jr. and Eric both retweeted claims from Republican operatives that included the late boxer Joe Frazier voting in Philadelphia and that counting software was rigged against Republicans.

Eric called for a ‘manual recount’ of all ballots – which would amount to as many as 150 million – because one county in Georgia said three days ago that it was briefly delaying counting due to a software glitch.

‘Software from hell! There needs to be a manual recount of every ballot in this country right now!’ he said. 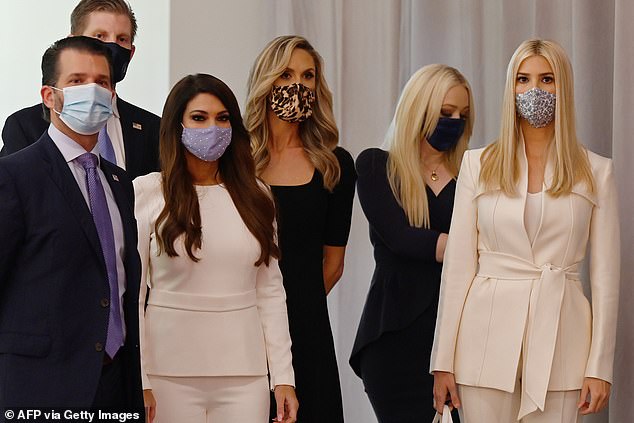 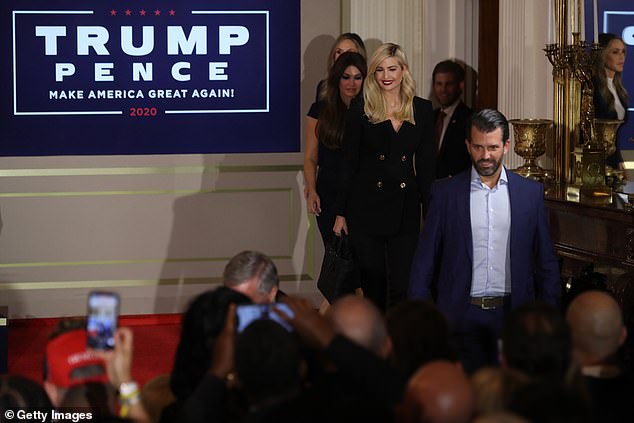 It was unclear early Sunday whether either son has spoken to their father since his defeat was called by networks just before midday Saturday.

But it was revealed late Saturday night that their brother-in-law Jared has been urging Trump to come to terms with defeat and offer a concession.

On Saturday, the White House released a terse statement saying the president ‘will accept the results of a free and fair election’ and that the administration ‘is following all statutory requirements.’