I had the biggest scare of my life after a common toy got caught around my baby daughter’s finger – please don’t make my mistake, it could have been so much worse

By Lucia Lamoury For Mailonline

A mum has warned of the dangers of mobiles above cots after her nine-month-old baby got a cord dangerously wrapped around her finger.

Teigan Campbell, from Coventry, had ‘the scare of her life’ after her daughter Poppy got caught in a mobile above her bed.

The baby was left with a clearly visible mark and Teigan said she wouldn’t have been surprised if Poppy had lost a finger.

She now says parents should think again before hanging the toys above their children’s beds – no matter how soothing they can be.

Teigan Campbell, from Coventry, had ‘the scare of my life’ when she found that her baby’s finger had gotten entangled with the cord from a mobile above her cot

In a warning to other mums posted on Facebook, Teigan said: ‘Last night I had the biggest scare of my life, Poppy usually has her mobile (she’s had since a newborn) on to settle her down when she’s going down.

‘For about half an hour after she went to sleep, I didn’t hear a peep out of her until I was in the shower and she started crying randomly, which is really unusual for Poppy to wake in the night now.

‘When I went to check, my daughter had the string of the mobile wrapped around her finger, so tight I thought my child was going to lose a finger, that tight in fact I was struggling to remove the string at the start!’

She said she was left to console Poppy and even had to phone the NHS to see what she should do. 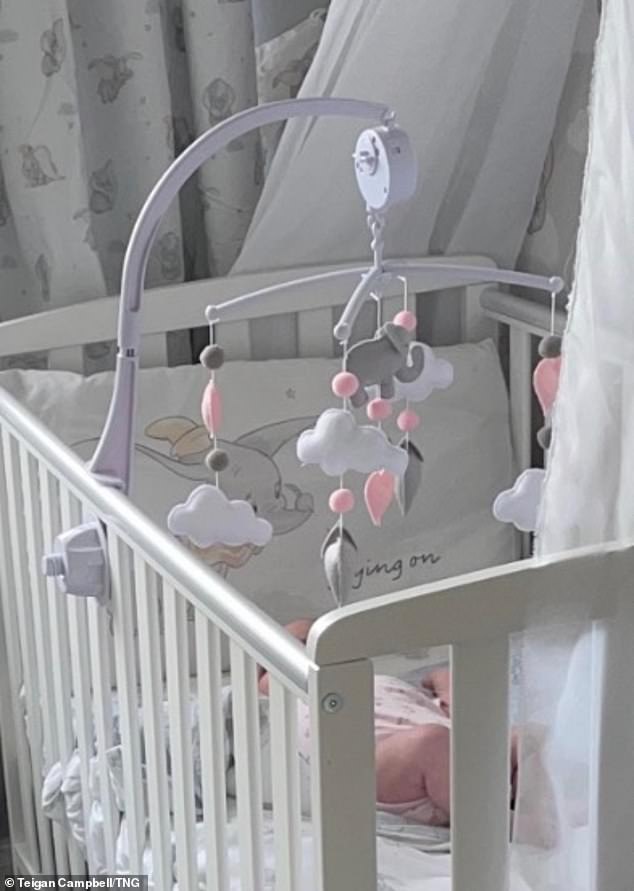 Nine-month-old Poppy, pictured in her cot, was left with a visible mark and her mother said she would not have been surprised if the baby had lost her finger 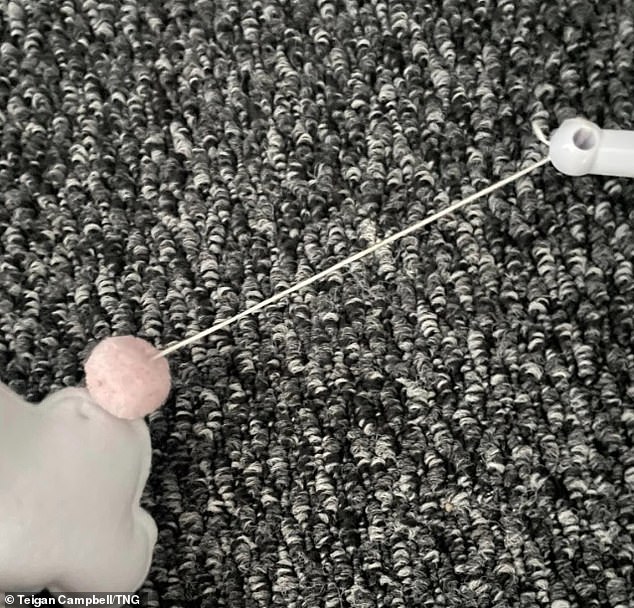 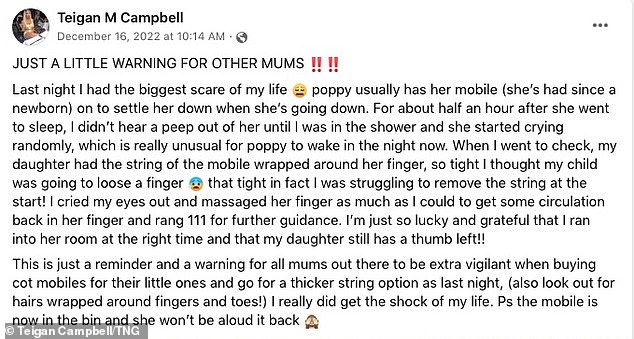 In a Facebook post, Teigan left a warning to other parents to be ‘extra vigilant when buying cot mobiles’

Unnecessary items in a baby’s cot can increase the risk of accidents.

While evidence on individual items is not widely available, it makes sense to be as cautious as possible.

The charity recommends babies sleep in cots or Moses baskets that are kept as clear as possible and specifically advise:

No pillows or duvets

She went on: ‘I cried my eyes out and massaged her finger as much as I could to get some circulation back in her finger and rang 111 for further guidance.

‘I’m just so lucky and grateful that I ran into her room at the right time and that my daughter still has a thumb left!!

‘This is just a reminder and a warning for all mums out there to be extra vigilant when buying cot mobiles for their little ones and go for a thicker string option (also look out for hairs wrapped around fingers and toes!)

‘I really did get the shock of my life. P.S. the mobile is now in the bin and she won’t be allowed it back.’

The Lullaby Trust says mobiles should always be kept well out of reach of babies.

Similarly, hairs can also wrap around fingers, toes, cutting off the blood supply.

They are so thin they often go unnoticed but Hair Tourniquet Syndrome can cause major damage.

Missouri mum Sara Ward also warned parents of the dangers of the rare condition after she had to take her five-month-old son, Logan, to hospital when he developed the syndrome.

Sara, a mother of three at the time, was not aware of the risk and shared on Facebook that she and her husband ‘noticed a line going across Logan’s toe and some redness’.

His toe still hadn’t improved in two days, so they took him to see his pediatrician which is when they first learned of Hair Tourniquet Syndrome.

A hair was wrapped around Logan’s third toe on his right foot and the doctor and nurses spent about 40 minutes trying to remove it.

Mother, 21, reveals how her hair fell out and her skin began to ‘ooze’ after she stopped using eczema creams